Author: Garrick Dee Updated: November 4, 2020
Tags: Vacuum Reviews
I hope you like the recommended products. Just an F.Y.I., there are affiliate links in this post, and if you click any of those links, I’ll earn a commission.

Sometimes having brute force isn’t everything. It’s during these instances where you only need “enough” suction to clean just a small portion of your home. 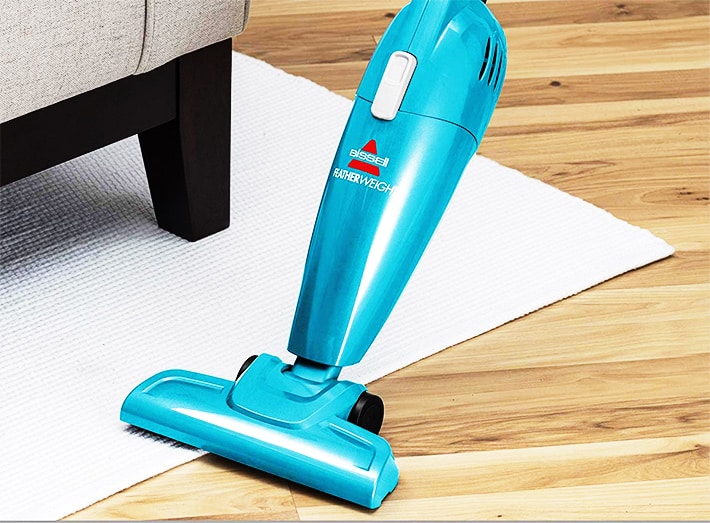 Sure more power would be nice but it’ll be at the expense of bulk – you can’t have it all.

The Bissell 3106 does not give you Dyson level suction but it makes up for it because it has a lot less mass plus it is dirt cheap, it only costs around $25 in Amazon.

But you still get a lot for that – a stick vacuum that can be used as a hand vacuum that’ll allow you to clean the little messes on stairs and upholstery.

I’ve reviewed a similar looking vacuum before, the Quick Up series from Eureka, the difference is that this one does have a cord that you’ll have to plug in.

Let’s find out how this performs.

What to expect from the Bissell 3106 Featherweight?

At first glance, this product looks like a stick vacuum. But take a closer look and you’ll that it’s actually a hand vacuum with a detachable floor nozzle and wand.

It’s really a clever design idea by Bissell but it does have its downsides.

On the plus side, it provides a lot of versatility in terms of the areas you can clean such as stairs and upholstery.

However, it lacks power and agitation which makes it unusable on carpet. 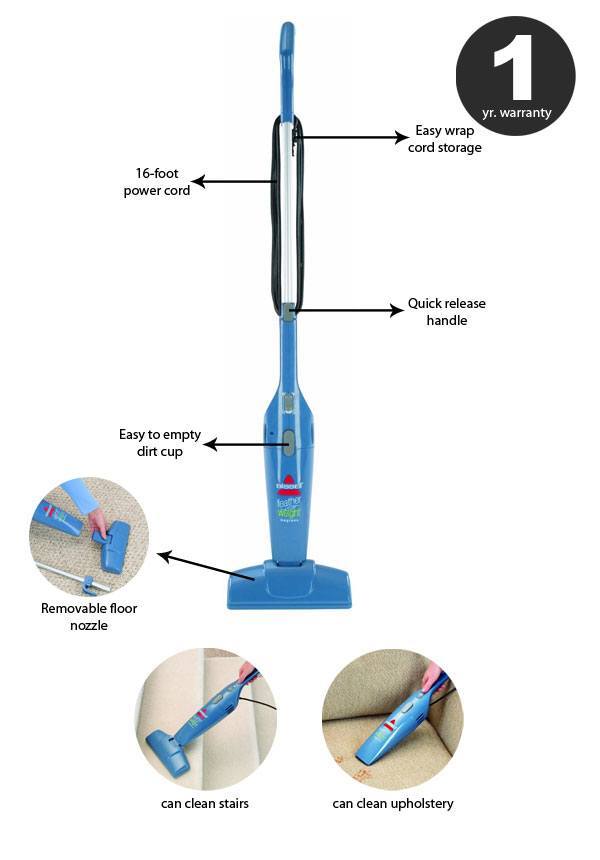 It does come with a crevice tool that you can attach on the handheld that will allow you to clean edges crevices and corners. 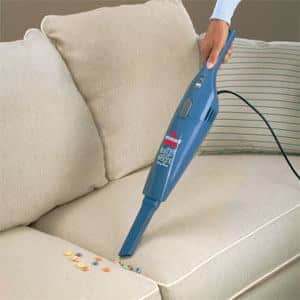 Cord is around 16 feet long which isn’t very long but you have to remember that this is a lightweight vacuum so putting anything longer that this would add to the weight.

The filter is washable but consider buying an extra filter so you’ll have a something to use while drying it.

To remove the filter, you’ll need to remove the handheld portion of this then push on a lever on top to separate the dirt bin from the motor.

You can remove the filter by pulling it out of the bin after emptying it. But it will be messy to clean since you’ll have to use your fingers to remove stuff like hair and dust.

It only comes with a 1 year warranty.

You’ll have to remember that this does not have any motorized brush so it relies purely on suction to pick up debris.

It will do well on this surface but don’t expect it to clean larger bits of dirt (at least with the floor tool) because the openings are very small. 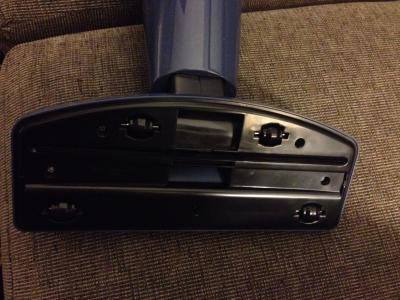 As you can see from the image above there is no sign of a motorized brush.

Since it uses plastic wheels, it may leave a mark so take note of this because it can damage expensive hardwood flooring.

Last thing I’d like to point out is that this does not swivel so you’ll have to manually lift this up when you want to change directions, no big deal though since it weighs only 5 pounds.

Don’t expect a lot from the 3106 Featherweight on carpet because it lacks a motorized brush to make this a truly effective cleaner on this surface.

It can clean surface dirt without any problems but picking up embedded dirt under thicker carpet will be a challenge.

The good news with this is you can clean carpeted stairs, at least the thin pile variety.

Again it will only be effective for surface dirt but it will be a great maintenance tool to have in between deep cleanups.

Unfortunately, it won’t be very effective in cleaning up pet hair on carpet because it lacks a motorized brush.

The handheld nozzle would be able to pick up some pet hair on upholstery and baseboards but don’t expect anything more since it does not have a dedicated pet hair tool for this task.

But on bare floors consumers have been happy on how it picked up pet hair because it has good enough suction.

A majority of the folks who left a review were happy with the performance of this lightweight stick vacuum.

Suction was good enough for surfaces like hardwood, tile and linoleum.

It also works decently on thin pile carpet. However the small wheels make it difficult to push on carpet.

Pet owners also were happy on how it cleans pet hair. But a majority of pet owners only had bare floor.

Several college students raved about this because it was really cheap (if you’re a college student with a lot of debt there’s no way you can afford a $50 vacuum) and it didn’t take too much space to store in their dorm rooms.

Complaints with this vacuum mostly were about the quality.

But remember that this vacuum is made in China so expect these types of issues and you’ll get what you pay for.

If you want better quality, then expect to pay more for a product like a Shark Rocket ION or Dyson V8.

Don’t worry though, it still has a 1 year warranty so if there are any problems, just call Bissell and they’ll take care it for you.

You can buy this from Amazon for around $25 and it is eligible to their free 2-day shipping only if you join Prime.

This would be a great option for owners of small homes with mostly hard surfaces looking for a really cheap vacuum.

Broke college students will appreciate this vacuum because it’s cheap and small enough to store inside their dorm rooms.

It’ll do a decent job on bare floor but the plastic wheels can potentially scratch.

However, the lack of a beater bar makes this almost unusable on carpet.

If you need something for carpet, I suggest that you get something with a motorized brush for this task as it will be better equipped and give you less frustration.

Another issue would be the small dirt cup so expect frequent trips to the bin.

This will work best inside small homes with mostly bare floor. Don’t even think about using this on rugs or carpet.