Sometimes we don’t need all the bells and whistles, just the bare essentials is enough.

With the CHV1410L, Black and Decker provides it for people looking for no nonsense functionality that’s friendly on your pocket. 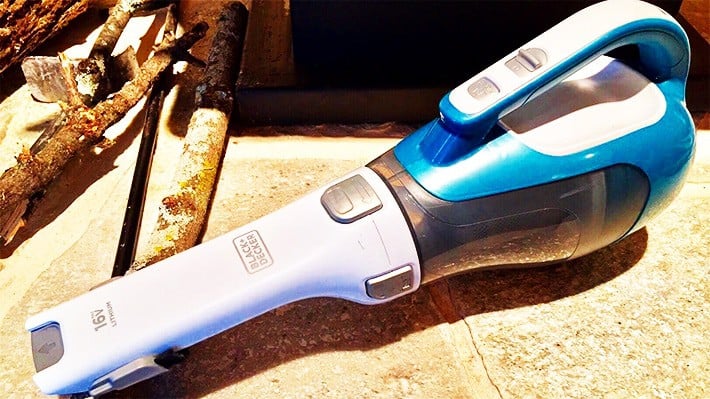 The CHV1410 is one of the bestselling handhelds in Amazon thanks to its lightweight design and low price.

Take note there are two versions of the CHV1410, this one I’m featuring here has a 14.4 lihium ion battery, there is another version with a slightly larger battery which is a 16 volt lithium ion battery.

Don’t let that hinder you from having a look at this handheld because even though the battery doesn’t use a high voltage it still cranks out a decent 23 air watts.

Comparing it to its bigger brother the BDH2000L that produces 24 air watts or the top of the line DC44, it isn’t very far off plus it is $30 cheaper.

The good thing about having a smaller battery is it uses less electricity, Black + Decker claims that the smart charge technology uses up to 50% less.

Its features are similar to the CHV1510 and the BDH2000L that I’ve reviewed previously – roughly the same size and weight.

All three have pull out crevice tools and fold-able brush tools, the difference is the battery, this one uses a 14.4 volt lithium ion battery that takes around 4 hours to charge, run time however is mixed based on reviews.

It comes with a pull out crevice and fold-able brush tool.

To remove the dirt cup, press the two release levers on both sides then empty it over a trash bin.

The filter has two parts – an outer plastic mesh that traps larger bits of debris like pet hair and crumbs and an inner cloth filter that traps finer ones.

This design makes it less messy to clean up. But you’ll have to clean the cloth filter regularly to maintain suction.

Black and Decker doesn’t specify the run time. But most users reported around 15 to 30 minutes of continuous use.

Black and Decker will send a replacement unit if the product you get is a faulty one. And consumers confirm that they will actually do this for units that are defective.

Just don’t do anything crazy like cleaning a wet floor because this will void the warranty.

It comes with a 2 year limited warranty on the whole unit.

This is best utilized as a spot clean up, the nozzle inlet is big enough to fit in medium sized bits of debris like cereal, breadcrumbs, pet droppings, etc. Suction is strong enough to pick up fine to medium sized dirt but it cannot pickup large or heavy stuff because it won’t fit through the opening.

Again, because this is a handheld it’ll work best for spot cleaning carpeted floors.

It doesn’t have any motorized brush so it’ll only work on low pile carpet.

This would be great for cleaning though to reach spots on edges and corners.

The absence of a motorized brush hurts it a bit in this area but it makes up for it with its suction power.

It has enough suction to remove dirt on this surface but since the nozzle is narrow, you’ll need more passes to clean.

You can also use this inside your vehicle since it is compact and lightweight.

The absence of a pet hair tool hurts this here a little bit but still is capable of removing pet hair on upholstery because it has decent suction in fact pet owners were among the satisfied owners.

One advantage of not having a brush would be maintenance. You don’t need to spend time cleaning hair from it.

One advantage of not having a motorized brush here is there is no maintenance needed in terms of cleaning the brush periodically.

One thing consumers loved about this handheld is the suction power.

Most of them mentioned it had very good suction power and it had decent run time – between 15 to 30 minutes.

Some even mentioned that they’ve used it for a few hours but I would take that with a grain of salt because they probably used it intermittently for over an hour.

Out of the over 300 reviews, less than 50 gave a negative review which is a very good ratio.

Some did complain about the filter clogging up fast when cleaning a lot of dust. Another complaint is the charging stand where the vacuum easily is knocked off.

Others complained about the lack of suction, noise and the brightness of the LED charging indicator light.

There were also complaints about the pull out crevice tool getting pushed back in when pressure is applied but other consumers have refuted this saying that it has can be locked in place.

Over 70 people left a review and around 92% would recommend this to a friend.

They liked that it used a lithium ion battery instead of a NiCad because wasn’t prone to discharging.

A lot of folks like how this vacuum cleans, decent run time and ergonomics.

Some though complained about the charging stand that didn’t have a wall mountable option, other complaints included weak suction and a very light LED light.

You can buy this lightweight cordless from Amazon for less than $50 and it’ll be eligible to their free 2-day shipping if you join Prime.

This handheld is a great option for folks looking for a cheap vacuum for cleaning small messes around their home.

One of the more underrated handhelds right now in the market because the numbers don’t jump right out but B&D was able to squeeze out 23 air watts out of it, putting it in perspective the Dyson DC44 products 28 air watts so it isn’t too far off.

What’s great is that it only costs under $60 and you still get a 2 year warranty for it which makes it one of the best deals in my book.

There are limitations. One would be the lock of the crevice tool which isn’t very secure. It will slide back if you put too much pressure on it.

For spot clean-ups this vacuum does a fantastic job, won’t pick up larger bits of dirt though because the nozzle is narrow.

The battery isn’t removable so if it fails, you can’t just go online and buy a replacement. You’ll need to send it to Black & Decker to have them fix it.