The Black + Decker CHV1510 allow home owners to have a basic vacuum that will meet all their small clean up needs around their home. 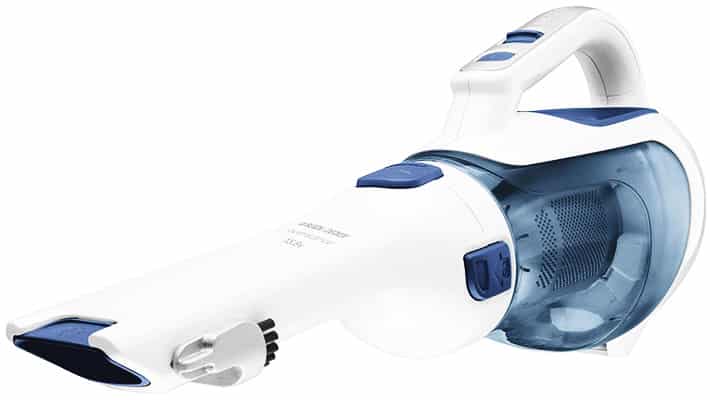 Despite being reasonably priced at under $70, the warranty isn’t, Black & Decker gives you a full 2-year warranty on the vacuum and battery.

This is the older brother of the newer Black and Decker BDL2000L and the bestselling handheld in Amazon, it looks exactly the same and has the same attachments, dimension and weight are pretty close.

The difference is the color, battery type and surprisingly this one is a little bit more powerful than the newer BDL2000L – around 1 air watt more.

It however comes with an old tech 15.6 volt nickel cadmium battery so there may be some issues with fading according to some reviews but since this is a spot cleaner it won’t be that big of an issue as it will be if it’s a floor cleaner.

Powering this lightweight vacuum is a 15.6-volt nickel cadmium battery, while it may not sound like a lot, it matches newer its new lithium ion powered brother – the BDL2000L in terms of suction power.

Rated at 25 air watts, the CHV1510 has 1 air watt more than its younger sibling and at around half the price, one of the best deals around, no wonder it is a best seller.

The nickel cadmium battery is a bit of a concern because it takes ages to charge and it can be prone to fading but since you’ll use this for quick pickups that won’t be as big of an issue as let’s say a stick vac.

It comes with two – a pull out crevice and a foldable brush tool. Take note that the nozzle can be rotated 90 degrees both directions to make it easier to clean more hard to reach areas without having to strain your wrist.

Black + Decker doesn’t specify how long does it need to charge for it to reach full capacity, what they recommend is keeping this plugged in at all times so that if and when you need it’ll be ready. Oh one thing they mentioned in the manual is charging it for 24 hours for the initial use.

The cloth filter included with the CHV1510 is washable.

The filter is housed in a mesh type plastic outer filter that blocks out larger bits of debris and hair from going in the cloth filter, this in essence makes cleanup much less messier because hair, dander and all other nasty stuff gets blocked by the outer filter and only dust gets through the cloth filter.

To maintain performance, wash the filter at least once a week to that it won’t lose suction.

Black and Decker does not state the exact run time figures here but based on reviews, it ranges between 5 (from 1 star reviews) to 45 minutes.

It comes with a 2-year limited warranty.

This isn’t designed to clean floors per say rather it is design for spot clean-ups.

It’ll be best utilized to clean areas that an upright or stick vacuum would have a hard time reaching like edges and corners as well as tables, upholstery, windows and walls.

It has pretty decent suction and the opening is decent so it’ll pick up dust, pet hair, dander, pet poop, cereal and the like.

Don’t use it on anything wet though as this isn’t a wet/dry vac or use it on something heavy like coins – use a shop vac for that.

Reviews say there are issues with the crevice tool sliding back because the locking mechanism isn’t sturdy.

If you push it hard enough, it retracts and you’ll have to pull it out again.

This is an issue if you’ll use this to clean your vehicle’s carpet or furniture inside your home. You won’t be able to push as hard as you normally would.

Based on video reviews, dirt pick up on carpet is pretty impressive for a handheld but take note that it will not deep clean carpet.

Even though this doesn’t have any pet hair attachment which would help remove pet hair off carpet or upholstery it still did a pretty decent job based on video reviews removing pet hair from upholstery.

This is the bestselling handheld vacuum in Amazon with over 1600 reviews and counting, over 960 gave it 5-stars and just over a hundred gave it 1-star which is a pretty good ratio if you ask me.

Most happy consumers raved about the good suction power and run time.

It was also pretty easy to empty since all you need to do is twist off the nozzle to empty it.

A lot of people called this the best handheld vacuum because of the combination of price, suction power and even though it has a NiCad battery in it, it still holds its charge pretty well – as long as 15 minutes before fading.

There were folks who had more than one.

A reviewer (Kate Travis) mentioned buying four of these handhelds because she very pleased with the performance.

Some even used this to pick up larger debris like small rocks and coins, while I don’t encourage you to do this, it is nice to know that it has this type of power to do so.

There were some negative reviews as well and most focused on the short battery life and the loudness of this.

Based on a review from Vacuum Wizard, they run it through a decibel meter and it came back at around 82.5 decibels which is pretty loud but not deafening.

Some complained about the lack of suction but it turned out that they had lemon units which can be sent back to Black and Decker for a replacement.

Looking at the overall scope of the reviews, there are a lot of positive reviews and they were pretty consistent – strong suction, lightweight and easy to empty.

Some even had 4 of these in their homes.

Consumers in who bought their vacuums from Black and Decker were happy with the cleaning performance, compactness and how easy this machine was to empty. They say that this is a good handheld at an affordable price.

There were also complaints about the dock being awkward to use.

You can buy this from Amazon for less than $70 and it’ll be eligible to their free 2-day shipping if you join Prime.

This handheld would be great for folks looking for a lightweight vacuum to complement their stick or upright to spot clean different areas around the house that these larger cleaners won’t be able to reach.

Even though it doesn’t have a pet hair tool, the suction is still strong enough remove pet hair from low pile carpet and upholstery.

This would be great for cleaning stairs, though the narrow nozzle will require more work than usual.