I have a 2 year old son, and he is active, I mean ACTIVE. He throws everything around, tears newspapers, all that toddler stuff. 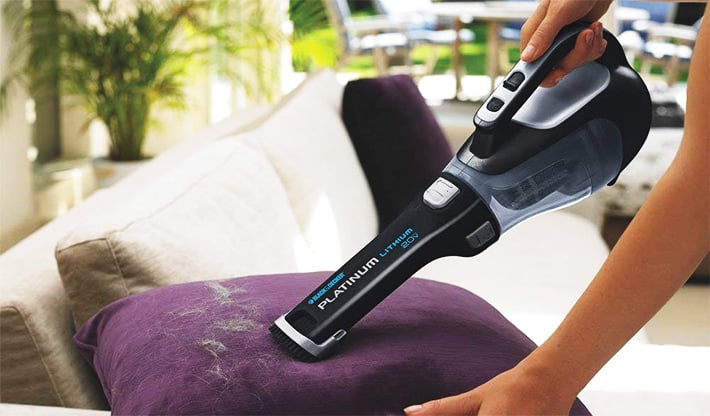 If you’re in the same boat as I am, the Black + Decker BDH2000L is a no-nonsense vacuum that you can pick up and clean up messes here and there while chasing your toddler around.

Black & Decker claims this new battery charges around 6 times faster. And is at least 25% more efficient compared to the old NiMH batteries in previous models.

This one has a more traditional handheld design. And it doesn’t have a flexible hose like the one found in the Black & Decker BDH2000FL.

But the good news is this has a bigger capacity at around 20.7 ounces. And close to 3 air watts (this measures the suction power of a vacuum) stronger.

Just for your reference, this is an updated (or let’s say a new) version of the CHV1510 that used nickel cadmium batteries.

Spec wise the two are similar in terms of power and dust capacity.

Since this is a new product, it doesn’t have much in terms of reviews online.

The Black and Decker BDH2000L doesn’t have any external attachments.

However it does have an extendable crevice that doubles the reach and a brush tool that folds down when you need to clean dusty areas.

However it doesn’t have any pet hair attachment included. So removing pet hair stuck on the sofa can be a little tricky.

There aren’t any official numbers from B&D on how long you need to charge as well as the run time. So we’ll go with what the consumer says in the reviews across the net.

But since this has a similar 20 volt battery as the BDH2000FL, the runtime will be roughly the same at around 15 to 30 minutes, charging time though will take longer.

Both tools are built-in the tool. It comes with a crevice and a retractable folding brush tool.

It doesn’t come with an extra filter that the BDH2000FL has.

There is no official charge time mentioned by B&D. But if you base it on their chart.

Of the three platinum series vacs – this has the longest charging time roughly 3 times longer than the flex. And the handheld vac (this is based on the one star this product had while the other two had three).

Filter has two parts, an outer plastic mesh that traps larger debris and an inner cloth filter that traps finer ones.

Removing the dirt canister and filter is easy, you’ll notice that there’s a couple of buttons – one on each side of the head.

Press on both then the head comes off then you can empty all the dirt collected. The dirt bin is almost transparent so you can see if you need to empty it. 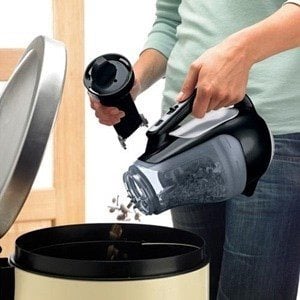 To remove and clean the filter, just press a button right below the power switch to remove the container. After removing the dirt cup gives you easy access the cloth and mesh filter.

Both filters are washable, just make sure to air dry before putting it back.

Take note that if you’ll clean finer dirt, it will need more frequent cleaning as some reviews pointed out – as often as once a week (maybe more) depending on how often you use it.

Consumers across different shopping and review sites reported a consistent 15 to 30 minute run time with some reporting that it gave them almost an hour which is really good for a cordless.

All Platinum series vacuums have a 3-year warranty.

A short demonstration of how the BDH2000L cleans inside a vehicle…

Remember that this is no more than a spot clean up tool on all surfaces – just had to get that out of the way.

This surface is where it shines the most. With a bit more power than the BDH2000FL, it is strong enough to pick up loose debris like cereal, pet hair, torn paper, small pebbles and the likes.

Be careful though when cleaning really fine stuff like baking power because it’ll clog up fast since these types of debris will get past the primary mesh filter that blocks out larger dirt and get into the denser cloth filter.

If you’re noticing that performance is a bit lacking after you’ve finished cleaning very fine particles like power, take a moment to give the filter a visual check.

You may need to manually dislodge anything clogging it by either tapping or shaking. If that doesn’t work you’ll need to wash the filter in running water then air dry.

Using this on carpet can be a little tricky. Since it only has a brush and crevice tool, it won’t be as efficient as something with a brush roll.

Cleaning up loose dirt is easy but it will not deep clean carpet. So this is just a spot cleaning tool on carpet.

As you’ll see it in this video – she had some difficulty cleaning dirt that’s stuck on her car’s floor.

It doesn’t have any pet hair attachment included. You’ll need to rely on the crevice tool to pick them up on sofas and on any type of carpeting.

This is a new product but it has a decent number of reviews.

Currently, it has a little over 80 reviews with around 130 giving it the full 5 stars.

In these reviews, users liked how light and agile this unit was. This makes it easy for them to carry around their homes for spot clean ups.

While it scored high marks on cleaning bare floor, it didn’t fare as well cleaning carpet with quite a few complaining that it didn’t do a good job cleaning the carpets in their vehicles.

This vacuum does not have the power to deep clean carpet.

Unfortunately a couple of folks got defective units. But that’s what warranties are for and remember that this has a 30 day money back guarantee. So if you don’t like it for whatever reason you can get a refund.

You can buy this from Amazon for less than $60 and it’ll come with 2-day free shipping if you join Prime.

They also sell extended warranties for up to 3 years if you want that extra peace of mind.

This product is great for parents with active kids that tend to leave a lot of mess who live in homes without minimal carpet will appreciate this product the most.

It really excels in cleaning bare floor, windows, vents, grills, walls, lights, hard to reach areas plus all the nooks and crannies around your home because it has an extendible wand and a flip up brush that makes this possible.

It will struggle in cleaning carpet and without any pet hair tool. Don’t expect this to effectively clean pet hair off your sofa or carpet.

There isn’t any information exactly how long you’ll need to charge this. But it really didn’t matter for users because they keep this thing plugged in all the time when they’re not using it.

As for run time, expect it to give you at least 15 minutes which is more than enough for any spot clean up duty.

Be careful when cleaning dust because it’ll clog the filter fast. But since it is washable, you don’t have to spend too much on filters.

If you’re looking for something cheaper but still has a lithium battery consider the CHV1410L – it has roughly the same power at around $30 less.