With the Black + Decker BDH2000SL, Black and Decker was able to produce a no-frills product that simply does its job. 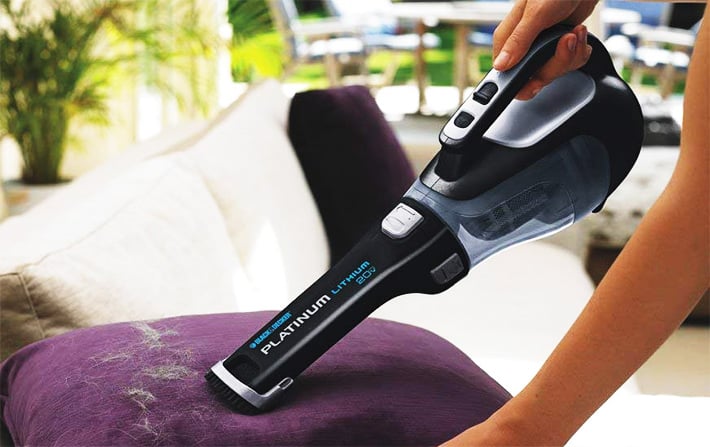 There are hardly any bells and whistles here but not everybody wants that, for people who are looking for a simple to use product for spot cleaning that will perform year after year, look no further.

Of the 3 Platinum series cordless vacuums, the BDH2000SL is the most powerful, rated at 25 air watts and the battery included is removable and interchangeable with other B&D power tools!

But it isn’t as versatile as the BDH2000FL with its 4-foot flex hose though it comes with a couple of attachments though that extends its reach – the crevice and brush tools.

This is has a similar design to the BDH2000L, the difference between the two is the battery and attachments.

What to expect from the Black & Decker BDH2000SL?

The feature that separates this with the 2 other Platinum series vacuums is the battery, while the other 2 have built-in batteries which may be a concern long term.

What’s great about this feature is that you can upgrade the battery if you feel that it’s lacking in terms of run time.

The removable battery also lessens the foot print when you charge it since you need to take off the battery from the vacuum to charge.

It comes with a removable crevice and brush tool.

The charger included has an LED indicator light that lets you know when the battery is full.

Take note that you’ll need to remove the battery from the vacuum in order to charge it.

There is no LED indicator on the vacuum unit itself.

There are no official numbers listed in the B&D website but based on reviews, it’ll take around 4 to 5 hours to fully charge.

It does have an indicator light on the charger itself that lets you know when the battery is full so keep an eye on that.

Similar to the BDH2000L, emptying involves removing the plastic nozzle then twisting off the filter covering the nozzle.

The filter is washable.

Based on reviews this will run between 15 to 30 minutes on a full charge.

If you want a longer running time, you’ll need to upgrade the battery to something like this.

This is where it shines. It is rated at 25 air watts which is three less than the Dyson DC44 in normal mode.

What does that tell you?

It has decent suction strong enough to pick up debris that will fit into the nozzle.

I have not seen any video reviews on what the max is but at the very least it is capable of picking up cheerio’s, cob webs and bolts.

It has a crevice and brush tool to clean up crevices and picking up dust, so you are covered there as well.

Take note that this isn’t a stick vacuum that has a wide enough cleaning path to clean floors. This is only a spot cleaner.

It won’t be as good picking up embedded dirt on carpet because it does not have a motorized brush or a pet hair attachment but for loose dirt scattered on top of carpet, it is effective.

You can use the detachable crevice tool to agitate the surface and pick up embedded dirt but only on thin pile carpet. On plush carpet, this will struggle.

Unlike the BDH2000SL, this does not have any pet hair attachment so you’ll have to rely on either the brush or crevice tool to pick up pet hair.

Looking at reviews, I can’t find too many pet owners leaving a review, so its pet hair pick up capabilities is still a question mark.

One of the few pet owners who left a review said that it did pick up pet hair on hard surfaces but on throw rugs it didn’t perform as well.

If you’ve used this on pet hair let me know in the comments section below.

This will work great on leather, fabric and other similar upholstered furniture that isn’t too plush.

If you need to remove pet hair, you’ll either have to use the crevice or brush tool to agitate and clean.

Here’s a promotional video from B&D

Out of the 40 something reviews, only 2 gave a negative rating on what seemed like lemon units that didn’t work as it should be.

The rest of the reviews were almost unanimous in saying that this product had good suction and great for quick pickups.

Consumers also like that the battery is removable that shouldn’t be a problem long term.

The biggest complaint I see here is the noise, with one review mentioning that he measured it with a decibel meter and it got over 100Dbs.

Here’s a video on how loud this vacuum is…

Another consumer did not like how it did on carpet. But remember that this vacuum isn’t a deep cleaning machine. This will be best utilized for cleaning loose dirt.

You can buy this in Amazon for less than $60 and it’ll be eligible to their free 2-day shipping if you join Prime.

Between this and the BDH2000L, I’d go for this because it has stronger suction and the attachments don’t slide back unlike the BDL2000L when you put pressure on it.

This is great for quick clean ups around the kitchen and living room where you’ll likely use this the most, suction is strong enough to pick up dust bunnies, cereal,  cobwebs and insects outright but it lacks the reach.

The battery can be removed and replaced with a more powerful one that will run longer and can be used for other B&D Platinum power tools.

This is huge if you want interchangeability.