What if I told you that a cordless vacuum could do it?

Let me introduce the DC59 MotorHead.

Important note: The DC59 MotorHead is the same as the Dyson V6 MotorHead but is around a hundred dollars cheaper. Just a heads up for you guys.

This is a DC59 Animal on steroids with a new beefed-up floor tool with its own motor!

This additional motor (a feature only found in corded vacuums) means that the motorized brush will spin faster and will be capable of deep cleaning the carpet.

It still has the same V6 motor and accessories as the original DC59 Animal.

Dyson says that this new and improved brush roll picks up better than other corded vacuums like the Shark, Bissell, Hoover, and Eureka.

Take not that this stick vacuum is more expensive than a lot of upright vacuums. But what you’re paying for is the technology that comes along with this product.

What to expect from the Dyson DC59 MotorHead?

The biggest improvement that this version got over the DC59 Animal is the larger motorized brush roll. Have a look at the comparison. 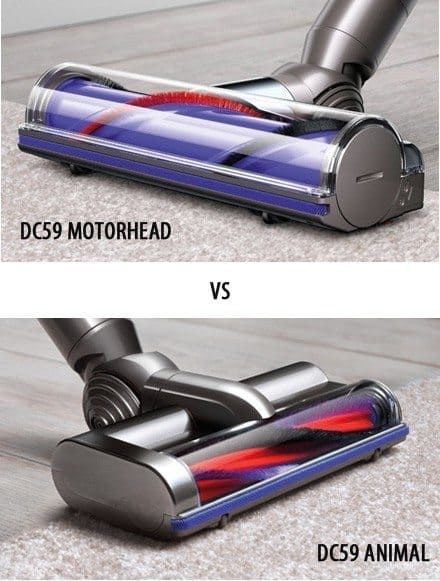 Not only is this bigger, it has its own motor that has 75% more power.

It in a way followed GTech’s lead put the motor right on the floor tool which eliminated the need for a belt.

Another feature that Dyson highlights is the powerful agitation that helps to deep clean.

Reviews have confirmed this, not only from consumers but also review sites like Geek.com who put this to its paces. 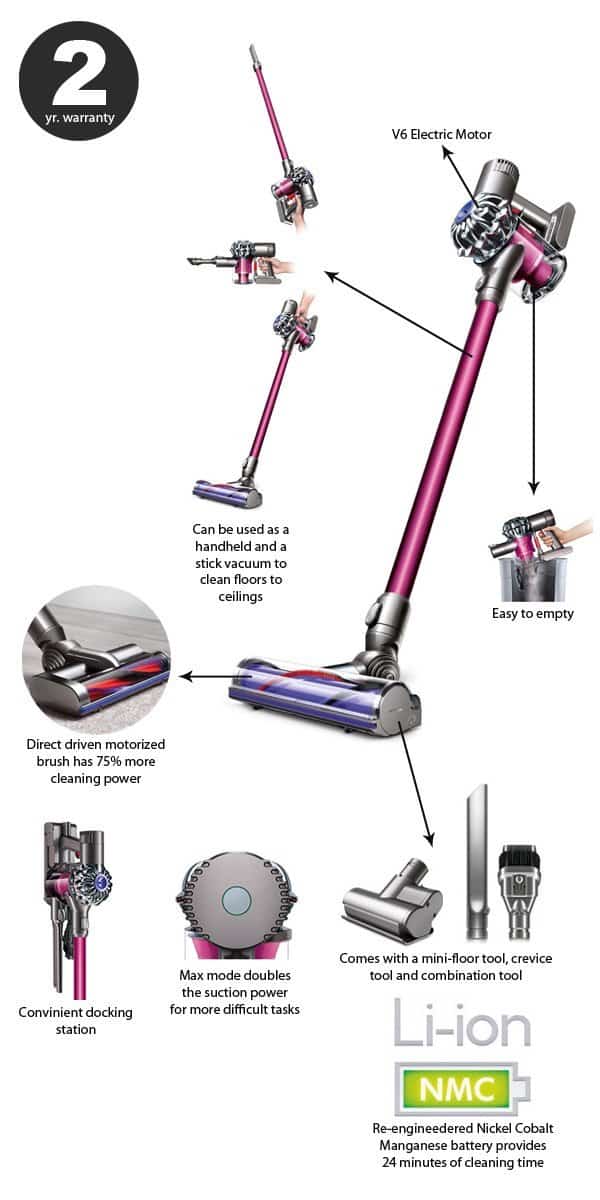 For the rest of the features, it is the same as DC59.

To help with versatility, this variant comes with the following tools

You can interchange these tools on the motor or wand. So this is a versatile cleaner that can clean floors and almost every nook and cranny.

It will take roughly 3-1/2 hours to fully charge.

Unlike the DC44, you don’t need to remove the dirt cup to access the filter.

If used in normal mode, it’ll run as much as 20 minutes. When you use the max mode that doubles the suction power exclusively that number goes down to 6 minutes.

It comes with 2 years when purchased in the United States.

Here’s a short demonstration on how this differs with the older DC44. The brush roll has its own motor and as you will see towards the latter part of the video how well it cleans short pile carpet thanks to the increase in agitation…

A detailed review by Jims Review Room were he tests the features, cleaning performance and run time (plus so much more)…

According to Geek.com, even with the new direct driven motorized brush, the Motorhead’s performance on hard surfaces isn’t too far off from the DC59 Animal.

On their test, a quarter cup of flour was poured on a hardwood surface and the Motorhead needed multiple passes to completely clean off flour.

It had a tendency of pushing stuff ahead of the vacuum because the vacuum head was very low on the floor and you’ll have to tilt it just a little bit.

On Geek.com’s tests it performed better on carpet. It needs a single pass to clean a quarter cup floor on the carpet.

This shows the effectiveness of the direct driven motorized brush head on carpet.

If you still doubt on how effective the DC59 is on carpet then watch this video and see how it does cleaning up on of the toughest things to clean – Kenetic sand which isn’t any ordinary play dough but something more loose and kids can go crazy creating stuff with it. Anyway that’s off topic.

The results on these two videos are impressive but remember that it was done only on pretty low pile carpet so the jury is still out on how this will far on thicker pile carpet.

This should work well on upholstery because the floor attachment can be used to clean dirt off chairs or sofas.

It also has a couple of attachments that will work well here – a crevice tool, combination tool, and a mini-motorized tool.

The combination tool can be used to remove stubborn dirt because when you push back the brush it’ll reveal an agitator that’ll be effective removing stubborn stuff like pet hair off fabric upholstered furniture. 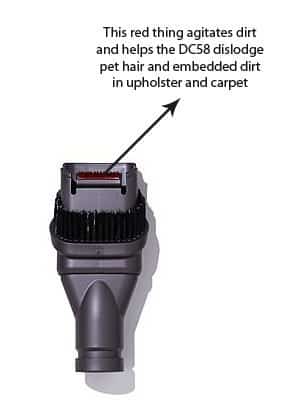 Note: Except for the floor tool and mini motorized attachment, the DC58 and DC59 share the same attachments.

You can use the mini-turbo brush to remove pet hair if you don’t want to use the floor tool on sofas.

Removing pet hair on carpeted and even hard surfaces shouldn’t be a problem with the direct-driven motorized brush tool.

Again, piggybacking on what Sal Cangeloso said in his review, the motorized floor tool was able to pick up 90% of cat hair off a wool army blanket which is impressive because it is very hard to remove with purely suction alone.

This amped up version received a lot of rave reviews not only in Amazon but in technology blogs like Geek.com and PC Magazine.

Consumers liked the strong suction power and the new floor tool which is 75% more powerful than the Animal. This allowed it to pick up lots of dust, dander and pet hair.

But if you watched the video above, it did well on crushed biscuits, some of which are large chunks so it is capable of handling large chunks if needed.

There were some complaints of the motor heating up fast and it was a little bit messy emptying, particularly with the tendency of dust to fly everywhere when you empty on a garbage bin. Avoid emptying this indoors as much as possible.

This is a great in-between spot cleaning tool even it’s expensive.

Lastly, the dirt cup is fairly small, so if you’re doing anything more than a spot clean up task, you’ll have to empty this often.

You can buy this versatile cordless stick vacuum in Amazon for around $300 more or less. And it’s eligible to their 2-day free shipping if you join Prime.

They also sell extended warranties of up to 3 years if you want that extra peace of mind.

This would be great for apartment or small home owners looking for a deep cleaning cordless vacuum on their carpet flooring.

The brand new floor tool is bulkier and 75% more powerful than the Animal; combine this with the strong suction makes this a very good carpet cleaner despite being cordless.

The more powerful brush roll makes you need to use the max button less.

The 26 run time may or may not be enough depending on how big your house is. Also the dirt cup is on the smaller side so if you’re doing more than spot cleaning, you’ll have to empty it often.

Pet owners will also appreciate the brand new brush roll design because it picks up tons of pet hair.

Not only does it remove pet hair from floors, it can also remove them on stairs and upholstery!

Overall, this is a great upgrade to the DC59 Animal that actually works but it comes at a premium so you’ll have to fork well over $500 to get this which I consider an investment to a cleaner home.

Unlike most cordless vacuums out there that do one thing well, the Dyson is a multipurpose machine that cleans from floors, nooks and crannies, all the way up to the ceiling.

Would it replace an upright? Well maybe in a smaller home, or a home with mostly hard surfaces but certainly not on a big home with wall to wall carpeting.

Good Option for Cleaning Carpet but a Bit Pricey

The DC59 is an older Dyson cordless vacuum that has the same motor as the V6 so expect the same results with regards to cleaning. This variant is a bit bare in terms of accessories as it comes with only the crevice and combination tool, so it’s not a good option if you have pets. However, for folks looking for a cord-free stick vacuum capable of cleaning carpet, it is ideal. The lack of the soft roller tool limits its effectiveness on hard surfaces.