Author: Garrick Dee Updated: July 21, 2020
Tags: Cordless Stick Vacuum
I hope you like the recommended products. Just an F.Y.I., there are affiliate links in this post, and if you click any of those links, I’ll earn a commission.

Is it possible to have corded power from a cordless vacuum?

Well Dyson claims that the DC59, their latest cordless stick vacuum has that much power from its new 350W digital motor they call the V6.

Mashable goes a step further saying that it runs 5 times faster than a race car.

Update: Ever since I published this article, Dyson has since released the V6, V7, V8 and the V10 series.

The best deal in my opinion would be the Dyson V7 MotorHead which has the same power as the V6 Animal but it’s less than $300. It a slight bump in power and an easier to empty dirt bin.

However it does not come with the mini-turbo brush that will clean pet hair from upholstery.

What has Dyson upgraded in the DC59?

Well they’ve lightened it up by 0.3 pounds, made the dirt bin 3.84 ounces bigger, widened the floor tool by an inch and a half and extended the run time by 6 minutes (boost remains at 6 minutes though).

It uses the same Nickel Cobalt Manganese battery as the DC44.

All these improvements come at a premium – at close to $315.

What to expect from the Dyson DC59?

To give you a quick overview of the difference between the DC59 and 44 have a look at the chart I’ve prepared below. 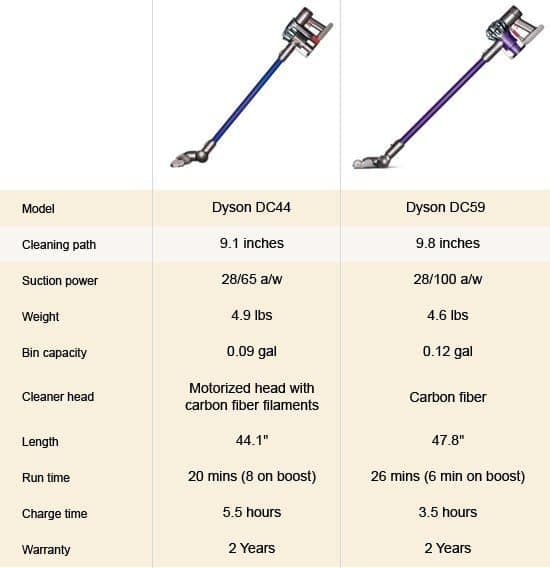 You’ll see that the DC59 despite being bigger is actually almost half a pound lighter.

That’s because it used more carbon fiber which provides the structural integrity it needs to withstand vibrations created by a motor spinning at over 110,000rpm (taken from a Mashable article).

Despite some complaints by consumers, Dyson still uses the same trigger mechanism as its power switch to maximize run time.

Powering this is a brand new 350W V6 motor that spins at 110,000rpm. And it’s the 2nd Dyson to use the 2-tier cyclone system. This will help filter out fine dust particles and keep the main filter cleaner for longer.

To see how the DC59 cleans, watch this video…

The Dyson in the video is actually the DC59 MotorHead that has the older cleaning head that’s less powerful. I just want to share with you what type of performance to expect from this.

One big difference would be the soft roller head found in the V6 product line that works great on hard floor. You can find this tool specifically in the V6 Fluffy which is great if you don’t have any carpet at home.

Similar to the Dyson DC44, it comes with a mini motorized tool, combination tool and a floor tool that is over an inch wider than the previous Dyson.

It’ll take around 3.5 hours to charge.

Dyson has made it easier to remove the filter compare to older models. Watch this videos on how it’s done…

If you’re using it in normal mode expect around 26 minutes on average, less if you’re extensively using the motorized brush tool. In boost mode because it uses 3 times as much power, that number goes down to 6 minutes.

Comes with a 2 year warranty. Don’t loose that warranty card and don’t forget to register your Dyson.

See it in action against the other brands in the market.

The vacuum to the on the upper left is a Hoover Linx Stick Cordless while the one in the lower left is a GTech AirRam, am not sure about the one on the lower right…

This is an interesting video comparing the DC59 vs Gtech AirRam (which Dyson claims has only 4 Aw at the cleaner head).

Remember that this is a demonstration done in a Dyson lab so take it with a grain of salt.

Similar to the previous DC44 model, the motorized brush has two main parts, the rubber squeegee and the carbon fiber bristles that agitate and pick up debris respectively.

Remember that this is a brand new design that they’ve made wider – close to 10 inches, which makes it as wide as some corded vacuums.

Reviews from pet owners have been hugely positive, not only can it pick up pet hair and human hair, they also mentioned that it didn’t clog up easily and it wasn’t hard to clean.

You can use the mini-turbo brush to clean hair on fabric upholstery. The main cleaning head does a good job on carpet.

One other attachment is also capable of removing pet hair. 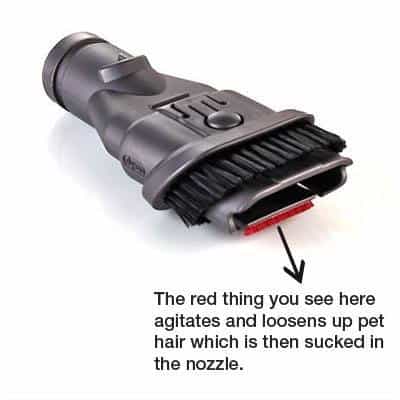 On short to medium pile rugs it won’t have any problem but on thick and plush ones it may have some trouble.

Use it on boost mode on plush rugs.

Since this is just a new product, only a handful of people left a review in Amazon. But expect that number to increase as more and more people get a hold of this.

Consumers like this because it is light. If you compare it to an upright vacuum, the difference is night and day.

One concern by some would be the trigger switch that could strain the finger and wrist because you constantly need to squeeze for power. But the trigger design has been improved through the years and is now feather light.

Cleaning performance was top notched as everyone in Amazon said that it was great at cleaning off dust, dirt and pet hair.

Though there was one consumer mentioning that it didn’t do well on thick rugs.

Don’t expect this to deep clean thick rungs or carpet.

The 2-tier radial cyclone will filter out fine dirt and dust. So if you have some sort of allergy issues, this is a good option.

Another con here as noted by consumers is the lack of run time – only 26 minutes (6 minutes on boost) and the very high price.

One other concern is the small dirt bin that needed to be emptied frequently one positive about this is that Dyson added a feature that allowed you to remove the clear bin so that it can be washed.

Similar to what consumers said in Amazon, people who left a review in John Lewis appreciated that lightweight nature of this product especially those who were in their 60’s who couldn’t carry a heavy upright.

Feedback on cleaning performance was also another positive with one consumer saying that it didn’t scratch his hard wood flooring and another saying that even on normal mode it still picked up a lot.

I only saw one negative review here saying that he or she was only able to clean 1.5 rooms and decided to return it but still said that it had fantastic suction.

Luke Johnson who published the review here said that comparable is the right word when comparing the power of a Dyson DC59 to a traditional corded vacuum.

In their tests using the normal mode it worked well normal carpet but it will struggle somewhat on plush carpet, that’s where the boost mode comes in where it was able to remove embedded dirt in plush carpet, downside to this is that it only lasts 6 minutes.

They’d recommend this product to small homes because of the 20 minute run time.

It received a “Mashable Choice” award from you guessed it popular tech blog Mashable.

Pete Pachal really liked how this was even lighter than the previous DC44 and despite that it still had enough power to clean his living room rug.

Even his 4 year old son had no trouble picking it up and cleaning coffee grounds on the kitchen.

Here’s a demo on how it did on his rug.

They did a test on sugar on different surfaces and reported that they didn’t have any issues picking it up.

While they liked the suction power, they said that the run time is particularly short especially on boost mode and would be great for small homes.

Also they mentioned that the battery can’t be swapped which is a big downer at least for me because if it fails then you’d have to replace the whole thing or go to a Dyson service center to have it repaired.

You can buy the Dyson DC59 Animal from Amazon for less than $315. And it’ll be eligible to their free 2-day shipping if you join Prime.

They also sell extended warranties if you want that extra peace of mind of up to 3 years!

While other brands claim that their products had corded power this is probably the closest one based on both written and video reviews I’ve found online.

That though has one caveat – it will last only 26 minutes (less if you extensively use the floor tool) and 6 minutes on boost.

Expect to pay a hefty premium as well.

This is great for owners of small flats to medium sized homes looking for a versatile and lightweight cleaner that’ll not only clean floors and stairs but with the long extension wand, it’ll suck in cobwebs out of your home’s ceiling.