The ErgoRapido 2-in-1 is a compact and lightweight vacuum that allows users to use only one product to clean almost everything inside their home.

You can use this cordless vacuum as a stick or handheld vacuum depending on the need.

Electrolux has 13 models in its ErgoRapido line of lightweight 2 in 1 cordless vacuums.

The EL 1030A has the strongest motor and the longest running time but it is also the most expensive.

You won’t find all of these in Amazon – they only sell 4 of the 13 as of this articles posting but just in case you want to see them all click here.

Since this is basically a handheld on top of a stick body, it will have a level of versatility.

However, it won’t have as much power as more expensive options like a Shark ION Flex or Dyson V8.

…that’s why you see a lot of negative reviews online.

What to expect from the Electrolux ErgoRapido EL1030A?

Since it does not have as much power as the more expensive brands, this cordless is most suitable on bare floor.

Don’t expect this to deep clean on medium to thick pile carpet because it lacks agitation and power.

It has a motorized brush that will help pick up dirt on carpet but you won’t be able to turn it off.

It has an 18 volt lithium ion battery that takes around 5 hours to charge. But if you’re using this for the first time, you’ll need a whole day to charge (24 hours).

The battery is located within the body and comes with a charging base that allows you to store this upright.

Here are the features

Here’s a video that highlights all these…

There are two attachments – a crevice and brush tool. You can store both within the charging unit.

Pretty neat because you don’t have to look for a place to store it,  you just clip it on in there.

Take note that the battery is built into the unit so you won’t be able to replace it yourself.

That’s part of the reason why Electrolux gave this a 2 year warranty.

If it breaks down anywhere within that time period you can call them (1-800-896-9756) and ask for a replacement but after that period though this essentially becomes disposable.

Push on the two locks that hold it in place to remove the filter then empty the dirt from the container.

Now this is the messy part, you’ll need to use your fingers to remove dirt on the mesh filter. A better option would be using a handheld vacuum to clean this part.

You’ll notice a that it has a lever that you can to pull and release to shake off the dirt – it’s equivalent to shaking or tapping it on something to dislodge anything sticking on it.

Anyway to show you how it’s done watch this…

Both mesh and cloth filters are washable, but don’t wash it in a dishwasher.

Expect anywhere from 10 to 30 minutes on a single charge.

If you only use the normal setting it should go the full 30 minutes but at high speed, that number will drop anywhere between 10 to 16 minutes but that will depend on whether you turn it on intermittently or don’t turn it off.

This comes in with a 2 year limited warranty.

This unit will work best on bare floor picking up debris and dirt effectively but only to a certain extent.

As I’ve seen in several video reviews and in written posts – as the dirt gets bigger the harder it is to clean.

It is great for small to medium debris, as long as it fits under the head. Larger particles of dirt will not fit and may create even more mess.

Be careful though if you have floors that are easily scratched because if the brush under the head gets dirty it can do some damage.

Check regularly to see if it needs cleaning. The good news is that it isn’t hard to remove the brush roll. 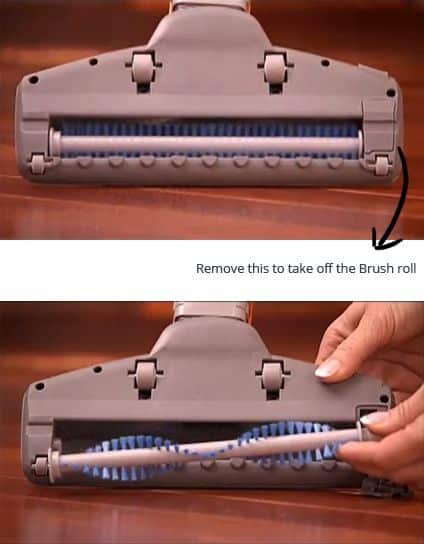 On low pile and even carpet or rugs, it shouldn’t have any problem picking up fine to medium sized particles and debris.

It becomes a problem if you use it on something more plush – it becomes difficult to push around, almost unmovable on thick carpets mainly because it has small wheels and a low clearance that renders it useless on these types of surfaces.

It won’t pick up everything on the edges because the air vents or inlets are around an inch from the edge – it doesn’t do a good job funneling dirt in this area.

A work around for this is again, using the handheld along with the crevice tool to pick up debris here.

Don’t count on it cleaning pet hair on thick carpets because it doesn’t have the raw power to force it out nor the attachments to loosen it up.

Please check out our list of the best cordless vacuums for pet hair if you’re looking for one.

A promotional video from Electrolux…

With close to 300 reviews and counting in Amazon, and more around  forums, youtube and other sites, we have a strong base of real life “testers” to give us a report on how this product performed over time, not just when it was brand new but over a period ranging from a few weeks to a few years.

There is one thing all the good reviews have in common – they used it either in bare floors or in thin carpets.

You can read the rest of what people liked and disliked in the pros and cons section.

You will notice that there are also a number of bad reviews and most of these came from people who tried to use it on carpet and didn’t get good results because it wasn’t designed for medium to thick carpeting.

Others who gave low ratings were consumers who got lemons – batteries that broke down within the warranty period which should be covered by the warranty but still a hassle nonetheless.

You can buy this in Amazon but unfortunately it is out of stock right now.

For homes with primarily bare floor or low pile carpeting.

Owners of these types of homes will appreciate the versatility this product offers, you can use it not only on floors but on other areas as well – chair, sofa, windows, etc. You might not be able to reach the tight areas because the attachments aren’t long enough.

If you plan to use this on medium to thick carpet, forget about it – the small wheels and low clearance make this impossible.

This isn’t the best tool to remove pet hair either, but on bare floors it can handle it.

You’ll need a dedicated pet cleaner for it if you have a lot of pets at home.

Since this is a handheld on a stick body, it won’t be able to hold much dirt (only 13 ounces to be exact). You will need to empty it quite often.

Battery is another issue long term since it is built into the vacuum itself. You will not be able to replace it yourself.