…most stick vacuums have a run time of 15 to 30 minutes but the Electrolux UltraPower Studio changes all that with its new 25.2 volt lithium ion battery that runs for up to an hour! 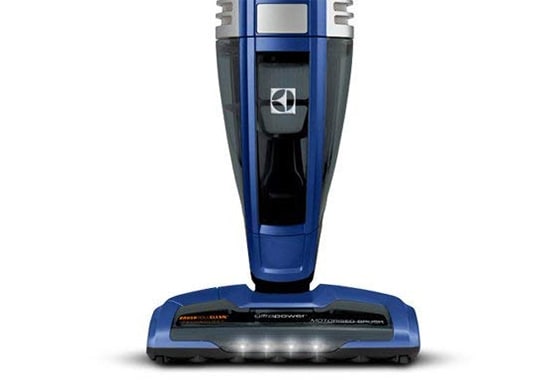 It comes with some ground breaking features that I think other manufacturers should look into.

Other than the long run time, it is equipped with a brushroll cleaning technology that is designed to cut tangled pet hair from the bristles.

Most other brands will have 2, cleaning modes, this one has 3 – normal, silent and booster.

It is one of the most maneuverable vacuums around with its 180 degree swivel so reaching tight areas under chairs and in between furniture should not be a problem.

This doesn’t have any attachments so this is strictly a floor cleaner.

What to expect from the Electrolux UltraPower Studio? 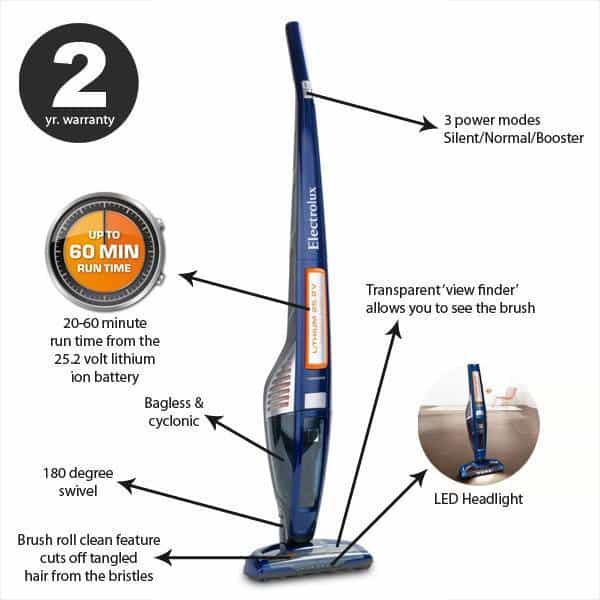 Battery is Energy Star rated which means it you don’t have to worry about it consuming too much electricity.

There are no attachments or accessories included here.

The battery is removable so there is no concern about the long term viability of this product unlike earlier ErgoRapido models.

Filters can be cleaned two ways – use the plunger to dislodge dust that sticks on the filter cloth and washing the filter in running water. 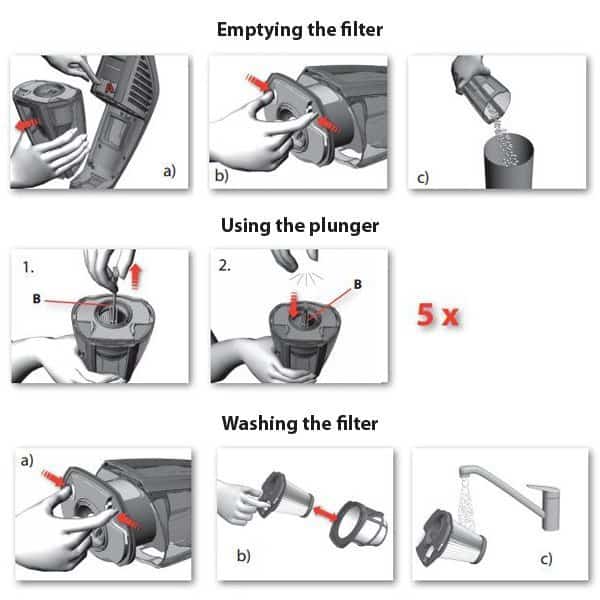 It will run the full 60 minutes if you use it exclusively on silent mode. Using the normal mode, that number will go down to 40 minutes, on boost that goes further down to 20 minutes.

It comes with a 2 year limited warranty.

It will struggle picking up pet hair on hard floors which is a surprise for me because it has a motorized brush roll.

In a test done by CNet, it hardly picked up any pet hair on hard wood floor.

It will also struggle with larger chunks of debris like Cheerios.

Again in a test done by CNet, it picked up less than half what a Hoover Linx Stick Vac did and 40% less than a GTech AirRam.

If you look at the base, it has a low profile so based on this alone larger debris will have a hard time fitting through it unlike the Linx Stick Vac that has a funnel in the middle that helps it suck in larger debris.

You’d have to tilt the base up a few degrees in order to suck up those Cheerios in.

On carpet, pet hair pick up improved (more on this on the next section) and overall got better results picking up fine dirt like saw dust and sand on medium and low pile carpet than the Hoover Linx stick vac. Against the DC59, it performed better picking up saw dust in medium pile carpet.

If you’re thinking about buying this vacuum, also think about getting a hand vac for picking up larger pieces of dirt.

A Black and Decker Platinum BDH2000FL would complement this pretty well.

On hard floor surfaces it will struggle picking up pet hair but on medium and low pile carpet, it did a better job. This is based on a review done by CNet.

Another consumer mentioned that the brushroll clean featured struggled in cutting an Angora cat’s hair, it was able to cut some of it but the rest you had to manually cut by hand.

In short if you’re cleaning long strands of hair, chances are it’ll get wrapped up on the brush and you’ll have to manually cut it with a scissor but the good news is the brush roll can be removed. 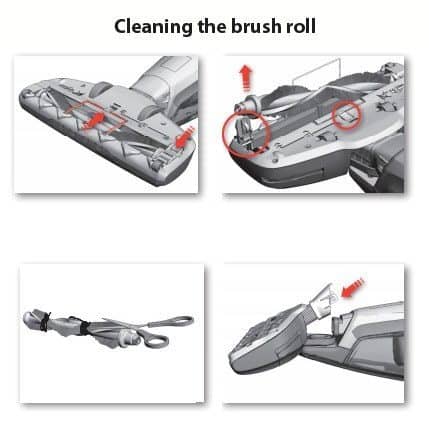 Despite some bad reviews particularly by CNet, it got a lot of positive reviews in other shopping sites.

Consumers were quite satisfied with the way it maneuvers, saying it was very easy to go around furniture, particularly tables where bigger vacuums will struggle with.

This is popular, especially with older people who may not have enough strength to carry a heavier vacuum.

Another feature that caught the fancy of some consumer was the plunger – it helped them removed dust off the filter without washing it.

This is great because you don’t have to wait 12 hours for the filter to dry before using the vacuum again.

Cleaning performance was a mixed bag. While it did well cleaning dust and other smaller debris, it does tend to struggle with larger bits like Cheerios and pet litter.

One consumer even compared this to the older Hoover Linx Stick Vac which currently is out of stock.

He said that the Hoover had better suction power compared to the UltraPower but take note that the former only has a 15-30 minute run time (tops) and this one runs for up to an hour.

The price was the biggest turn off because it costs over $300.

Consumers also mentioned that the brushroll cleaning feature will work but only to a certain extent, it will not cut hair that’s wrapped around the brush roll and you’ll need to cut it using scissors.

You can buy this cordless stick in Amazon but currently it is out of stock.

This vacuum will be great for…

…People with small to medium sized homes that have a mix of hard floors, low to medium pile carpet and rugs.

This would be perfect to use to clean up dust and smallish debris around the dining and kitchen area where areas under tables and chairs are tough to reach with a full sized upright.

It will struggle with larger bits of debris, so you’ll need a handheld vacuum as a tag team partner to this.

Older folks with arthritis will also appreciate the lightness and swivel action that make this easy to move around.

It comes with a charging stand, so won’t take up too much storage space and the LED lights come very handy because it helps you see dust in darker areas.

The price though leaves a lot to be desired, at over $300, this costs almost as much as a DC44 and a Gtech AirRam but it is able to hold its own in terms of cleaning, storage and maneuverability. If you’re willing to try out a new product, then this is the vacuum for you.