Eureka Quick Up 2-in-1 96F Review: A Lightweight Stick Vacuum

Author: Garrick Dee Updated: April 9, 2019
I hope you like the recommended products. Just an F.Y.I., there are affiliate links in this post, and if you click any of those links, I’ll earn a commission.

The Eureka Quick Up 96F is a bargain hunter’s alternative to more expensive $100 plus dollar stick vacuums like the Rowenta Delta Force or the Hoover Linx Stick Platinum. 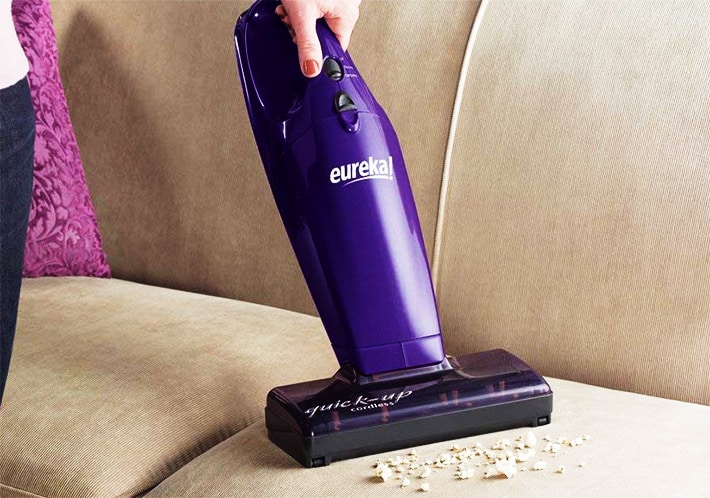 If you have hardwood, linoleum, tiled or laminated floorming at home, the 96F will be a good addition to your cleaning arsenal.

This isn’t meant to replace a full sized vac but for those in between clean-ups they work well.

The 96F is similar to the 96JZ that I wrote about a few weeks earlier.

Both have the same motor, features and dimensions.

The differences are the color and price, plus the 96JZ comes with an extra battery.

I’ve contacted Eureka about these vacuums and they confirmed that all Quick Up 96 series vacuums are similar – the difference is color, availability and extras.

Since all 96-series vacuums are similar, click on this link to see the full review of the 96JZ which basically is the same vacuum except that it comes with an extra battery.

I’ll just detail the user reviews here to give you a heads up on what consumers think.

Over 300 people left a review in Amazon with close to 200 giving it 5 stars and over 60 giving it 4 stars and several have purchased a Eureka vac more than once!

Among the people who gave positive reviews were pet owners who liked how it picked up not only pet hair but also pet food off their floors, they warned though that hair can get stuck on the bristles of the beater brush.

Parents also appreciate the compact and lightweight design allowing them to clean up messes left by their kids quickly.

Filter clean up though can be messy and some suggested about using shop to clean the filter or washing it twice a month.

Most negative reviews that came in were battery related – having a short run time, breaking down prematurely or losing its charge when not in use.

Other complaints that are common include weak suction, hair getting stuck on the brush (you need a scissor to dislodge them), small dirt container, dirt getting stuck on wheels and the unstable stick attachment.

Twenty four people left a review, with only one giving it a 3-star rating and the other a 1-star. Overall it had a rating of 4.3 – similar to Amazon.

Folks love it because it was lightweight, easy to use and had fairly good cleaning power. A couple of people mentioned it was either their 2nd or 3rd Eureka cordless purchase.

Several complained about that it had a wide cleaning path that’s not removable which makes it difficult to reach smaller areas as a hand vac.

Others complained that it was difficult to open the dirt container and filter.

Twenty three people left a review in Epinions with 20 of them saying that they’d recommend it to a friend.

The folks who left their opinions were pet owners, middle aged men and women, and parents.

They loved this because it’s light, easy to use and even with a small motor it still picks up dust, dirt and pet hair off the floor.

They also mentioned that it will struggle picking up larger chunks of dirt and won’t be as effective on thicker carpet.

You can buy this from Amazon but unfortunately it is out of stock.

People looking for a lightweight stick vacuum to replace a broom and dustpan to clean up messes on their bare floors.

It is equipped with a brush roll so larger bits of dirt like cheerios’ are picked up as well but take note that it will struggle picking up large bits of dirt.

It’ll work on carpet and upholstery, but do not use it on medium to thick carpets – it isn’t strong enough.

Don’t expect the battery to last very long, expect around 15 minutes on a single charge. Good enough to clean small messes around the house.

Remember to empty the dirt container each time after using it because it fills up pretty quick and to maintain suction strength.

It will take around 14 to 16 hours to fully charge but don’t fully discharge or leave it on the charger for days because it’ll kill it prematurely.