Author: Garrick Dee Updated: June 5, 2020
I hope you like the recommended products. Just an F.Y.I., there are affiliate links in this post, and if you click any of those links, I’ll earn a commission.

The 96HX is the most expensive in the Quick-Up 96 series sold in Amazon at a little over $60, close to $20 more than the 96JZ that has an extra battery. 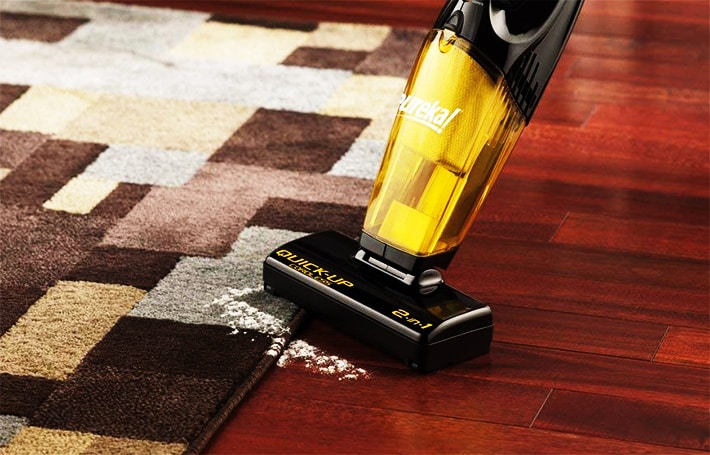 Update: Right now that’s not the case as the price has gone down below $40 in Amazon.

All Quick Up series vacuums have the same dimension, motor, 6 volt battery and weight – the only differences are the color and the accessories included – this one has an extra filter included plus the dirt bin is semi-transparent.

So what do the consumers think?

A lot of consumers agree that it is lightweight, easy to use and has decent battery life enough for cleaning small messes but there are concerns with the build quality, especially the telescopic handle because it tends to be wobbly.

This would be a good alternative for budget conscious shoppers who don’t want to spend on more expensive stick vacuums like the the Hoover Linx or Rowenta Delta Force.

Since this product is the same as the 96JZ and 96F, check out those reviews I’ve written to see the detailed performance reports on different surfaces, run time, charge time, pet hair removal, etc.

Close to 300 people left reviews and a majority of them liked this because it is light and relatively easy to move around even though the nozzle can’t swivel.

Will work well on hard floors but you’ll need multiple passes to pick everything up. On carpet, it’s less effective because of the lack of power even with the beater bar.

Consumers were generally satisfied with the power, saying it was enough for their clean up needs – which is very small messes.

The negative reviews however say that the battery takes too long to charge and didn’t last very long, some as little as 5 minutes.

Build quality was also an issue, with people saying that it was flimsy and the stick handled wasn’t sturdy and there were lemon units that didn’t work right out of the box.

You can buy this in Amazon but unfortunately it is out of stock.

This product is great for spot clean ups in homes with mostly bare floors because of its lack of power.

It’ll pick up small pieces of debris without too much problem but it will struggle with the larger bits. Although you can use this on carpet don’t expect to much.

And because it has a motorized brush, it’ll pick up pet hair but it has a tendency to get stuck on the beater bar and wheels so you’ll need clean this often if you have lot of pets or shed a lot of hair.

It’s hard to recommend this because the 96JZ is almost 20 bucks cheaper and it comes with an extra battery that costs $21 if you buy it separately.

This one only comes with an extra filter that only costs just under $5.

The pricing doesn’t make sense, makes me wonder why Eureka didn’t price the entire 96 series at the same price point.

Given the choice which one of these to pick up – I’d get the Quick Up 96JZ with the extra battery.