Author: Garrick Dee Updated: April 10, 2019
I hope you like the recommended products. Just an F.Y.I., there are affiliate links in this post, and if you click any of those links, I’ll earn a commission.

Eureka’s are known to make 2-in-1 vacuums that coverts from a stick vac you can use on floors to a handheld you can use on sofas, chairs, tables or other flat surfaces where a stick or an upright cleaner ins’t practical. 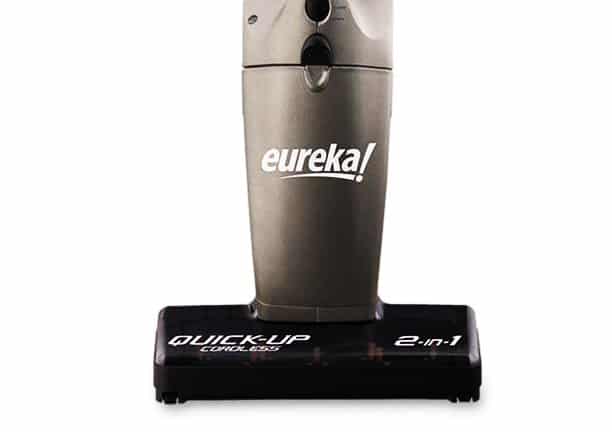 The Quick Up 96JZ is one of seven 2 in 1 Eureka vacuums I see in Amazon.

…with a lot of them raving about how lightweight it is which makes it easy to move around.

There were also compliments on its effectiveness in cleaning hardwood and tiled floors.

While 6 volts doesn’t sound too much, it is still strong enough to pick up dirt on bare floors and low pile carpets.

However it won’t get it all in one pass, you’ll need multiple passes so this is only great for spot clean ups at best.

Features of the Eureka Quick Up 96JZ:

The Quick Up 96JZ is basically a handheld vacuum that can be converted into a stick vac geared towards homeowners with small to medium sized homes.

This is great to have if your home has mostly bare floor but it would also work well on low pile carpet because it is equipped with a brush roll.

It is great for newlyweds or small families who don’t have a big budget but still want the convenience of a cordless.

Let’s have a look at the features

Like what I said in the intro, 6 volts doesn’t sound too much but don’t judge a cordless vac by the number of volts this only reflects the amount of voltage needed by the motor to run, it doesn’t reflect the suction power.

This has pretty decent cleaning power but if you’re cleaning fine stuff like powder don’t expect it to pick it all up in one pass, you’ll need at least 3 or 4 passes to get it all.

If there are still crumbs left, you can turn on the brush roll because this also acts a “boost” switch that increases the suction in addition to turning on the brush.

As with most vacuums equipped with brush rolls, once it gets dirty it tends to drag stuff that gets stuck in it on the floor and may leave scratches so make sure to check from time to time and clean if it gets too dirty.

All Quick Up series vacuums aren’t equipped with any sort of edge bristles so removing dirt from corners is not very good.

Works great on low pile carpet and rugs because it is equipped with a brush roll that helps “sweep” in dirt into the inlet but don’t expect it to pick up dirt in deeper pile carpet.

One side note on the brush, you have to clean this once in a while because certain debris will get stuck in there like hair or cereal.

Users were generally happy with the performance on carpet, even using this to remove pet hair.

They really liked this because it was way lighter compared to lugging around a full sized vac which saved them from having more back aches.

Don’t expect it take out pet hair on medium to deep pile carpet – it isn’t strong enough to do so.

Among the 4 and 5 star reviews, there were a lot of pet owners.

In one review, the consumer mentioned about owning 10 cats, 3 dogs, one rabbit, a parrot and she uses this to clean all the pet hair off her floors!

The 96JZ doesn’t come with any attachments, only an extra battery and a wall mounted charger.

To fully charge the battery, it’ll take around 16 hours.

The good thing about the charger is that you can charge two batteries at the same time – the extra battery plus the other plugged in the vacuum.

It is easy to take off the canister, just push the button on top of the power switch and the canister will dislodge.

Be warned tough that it can be messy because of the way the filter is positioned you’ll have to take it off first before you can empty the canister.

After taking off the filter tap it on your garbage bin to dislodge the debris stuck to it and empty whatever is left on the canister.

If you have any sort of respiratory illness, this isn’t for you because you’ll come in contact with dirt one way or another when you empty it.

Eureka doesn’t list how long the battery will last so there are no official numbers, so I based this on reviews.

The most users got from this is around 30 minutes, if you turn on the brushroll and use it on carpet don’t expect it to reach the full 30 minutes because the it adds to the workload of the battery. The shortest run time according to reviews is 5 minutes.

Because it uses nickel hydride, it can suffer from memory fade meaning if you don’t use it for an extended period it’ll lose its charge.

Eureka gives all their cordless stick vacs a 1 year warranty for the tool, battery and charger.

The lack of power and poor battery life but for the majority of the positive reviews, the power was adequate for them and battery life was good.

So it is at the opposite ends of the spectrum.

Among the people who were satisfied users were:

A reviewer even raved how this product changed his life because he was able to walk barefooted on his home after purchasing this.

He has three kids that made a lot of mess not only in their rooms but all around the house.

This is one of the more affordable cordless vacs you can find plus they also give you a spare battery, and if you get this in Amazon you can have it delivered at your doorstep free of charge.

It doesn’t have any accessories like a crevice / brush tool and flexible hose so you want to can the keyboard, tight spaces between the cushions of a sofa or cobwebs on the ceiling you won’t be able to use this but for everything else as long as there is a reasonable flat surface it’ll do the job.

This would be a great addition to your home if it has mostly bare floors and low pile carpeting for spot clean-ups.

It will also do a decent job on removing pet hair on both hard floor and carpet as reported by a lot of pet owners in online reviews.

If you have a small apartment or a town house like mine, this would be a great tool to have because you won’t need a huge storage bin to pack this away.

Whether or not you can clean a whole room or kitchen would depend on how much dirt the room has and the type of floor.

If you have a lot of fine debris like powder, you’ll need to go over it several times clean it all up, larger debris will need less.