Author: Garrick Dee Updated: April 9, 2019
I hope you like the recommended products. Just an F.Y.I., there are affiliate links in this post, and if you click any of those links, I’ll earn a commission.

Keeping carpet clean has got to be one of the toughest tasks out there.

You’ll need a strong upright that in most cases weighs over 15 pounds.

GTech now makes it possible for you to clean your carpet without having to lug something heavy. 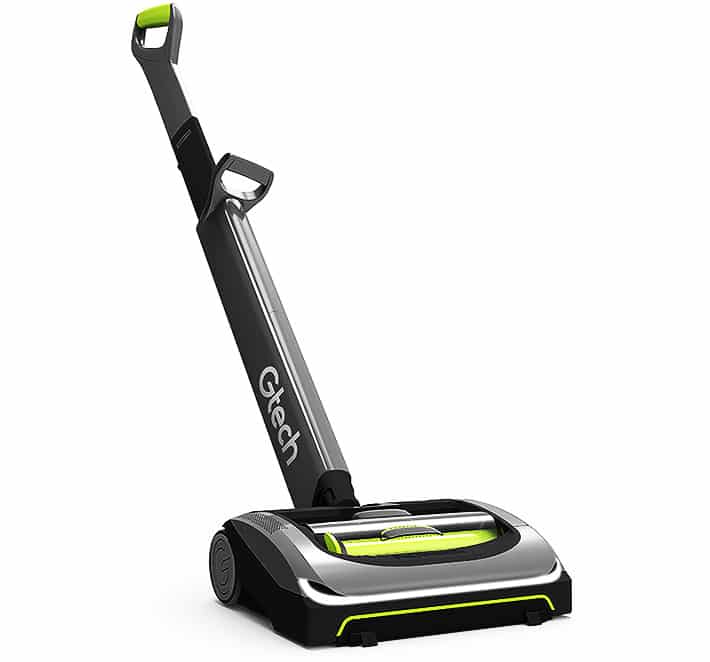 The GTech AirRam solves to issues – weight and the constant need to plug and unplug.

With the motor down beside the brush, power is right where its needed.

And the beauty of this design is that all the weight is at the cleaning head which makes it more ergonomic and easy to move around.

Whether your home has carpet or bare floor this machine will work equally well on both surfaces.

It is compact enough to be able to clean stairs.

In many ways this product is anti-Dyson. It doesn’t have cyclonic filtration. Both the dirt cup and motor are at the same spot at the base. And it uses air to compress dirt into “bales” which makes it easier to empty.

Their principle is simple really. Maximize efficiency by putting the motor down at the base because it lessens power loss – air doesn’t have to go through a maze of hoses.

Nick Gray, owner of Gtech, claims that this will provide upright performance on hard floor and carpet which is a pretty bold.

I’ve scoured the net for individual product reviews and these claims seem to hold up.

What to expect from the Gtech AirRam?

This uses a 22 volt lithium ion “professional-grade” battery and the motor consumes around 100 watts.

A 4-hour charge gives you roughly 40 minutes of run time.

Gtech says that this will save users roughly 210 quid over 5 years (if you use it 20 minutes per day). In essence it pays for itself over the long haul.

You can even plug this to a computer and see how much energy you’ve saved. It also gives you information on the amount of calories you burn as you use it. 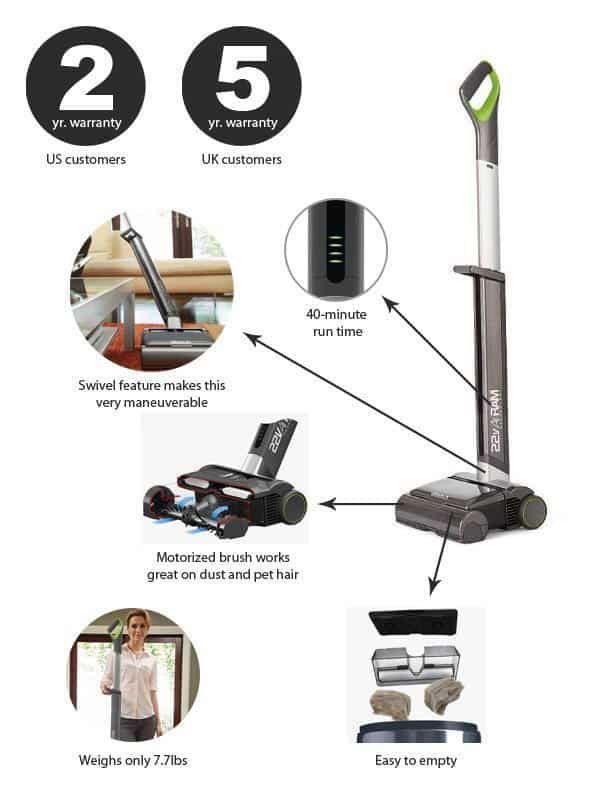 The design is pretty straight forward. It has a long handheld with the power switch at the back.

It is a simple design that aims to reduce as much weight as possible. Whereas a traditional upright will tips the scales at 15++ pounds, this cordless weighs less than 9 pounds!

You will not break your back using this.

At the bottom is the main cleaning head that houses the beater bar and motor. With both components side by side, power is delivered more efficiently.

On front of the base is a long strip LED that helps illuminate the area in front of it.

The AirRam has a 22-volt Li-Ion battery that Gtech says will run for up to 4 minutes. You can monitor the battery status with the 4-stage LED on it.

There are no hoses or attachments included.

It takes around 4 hours to fully charge.

Emptying dirt is simple, pop off the cover where the filter is located then remove the plastic tray the holds the dirt and empty it on a garbage bin.

Remove the filter (there are two of them) by unlocking the screw that holds it in place then it can be cleaned by tapping it on a bin.

Wash the filter at least once a month or more if you use clean a lot.

Update: A customer sent a message to Grey Technology basically asking them whey they didn’t have any warranty for their battery. So they looked into it and figured out it was a good idea and now their battery comes with a 2 year warranty! Kudos GTech USA!

The motorized brush does a very good job on all types of hard floors – tiled, hard wood, linoleum, etc. plus it is strong enough to reach dirt on edges.

In his first demo he tested it on his kitchen floor

With the help of the motorized brush it’ll pick up dirt on carpet well but when tested on thick carpet it’ll struggle as you’ll need multiple passes to pick up dirt embedded under carpet strands.

Because it relies on the brush to clean, it will drag a little bit as you manoeuvre it on this type of surface if your going against the weave.

Surprisingly the AirRam did better the the upright, picking up all of the sand in just a few passes, granted the Electrolux is an older model but it is corded and cranks out more power, so the results were still impressive.

Gtech engineers where able to extend the brush roll to the edges because the belt that drives it is at the middle. This feature helps this vacuum clean edges better.

It is over 40 inches long but it is just over 7 pounds so it is light enough to carry and move around the stairs although it can be a bit awkward.

The beater bar excels in picking up pet hair on carpet and bare floor but remember like with all vacuums equipped with this some of it will get stuck on the brush – just clean it regularly to maintain performance.

So far only 15 people left reviews in Amazon, and only one left 2 two star review – he was mainly concerned about the battery, how long it’ll last because replacement batteries cost around $80 – the price of a cordless vacuum!

Other consumers were happy with the performance, suction power, run time and manoeuvrability but didn’t like how noisy it is.

Close to 300 people left a review in Amazon’s UK site, and a lot of them where positive.

I noticed a lot of older people who had back products appreciate how this has made cleaning easier for them because it was light and it swivels which means they didn’t have to bend down as much to move this around.

Power was sufficient for most consumers here. Col Taylor commented that “The Air Ram picks up so much fluff and rubbish, far more than any other vacuum cleaner I’ve ever used.”

Much of the complaints  were related to the noise, hair getting stuck within the brush roll and some complaints about lemon units which is present in most consumer electronic products as there will be a percentage of bad units that come out of the assembly line.

Johnlewis.com is a British based online retailer, so it was no surprise that it had over 170 reviews since Gtech is a British brand so Brits will patronize their own product.

And a majority of them were happy with the performance on both carpet and hard floors with some even calling this the best cordless vacuum.

There were a number of senior folks over 50 would bought this because it was light and cordless.

Like JohnLewis.com, LakeLand is a British based e-commerce site and 26 people left their reviews here.

Among them were people with back aches who didn’t want to lug around a heavy upright vacuum whenever they need to clean.

They appreciated that it was cordless and the run time was good enough for them to clean their homes.

There was one complaint however that this didn’t clean the corners very well.

The guys from TrustedReviews really put this to its paces, testing it on all types of surfaces from laminate flooring, hard wood, nylon carpet and thick carpet.

They reported that this performed on all these surfaces except thick carpet because it lack the suction power of an upright.

You can buy this stick vacuum from Amazon for around $480 if you include shipping. A cheaper option would be getting Bissell’s version which is a few hundred bucks cheaper! It has a shorter run time though at 30 minutes versus the 40 minutes of the Gtech.

One of the best deals I’ve found was in Amazon because it has free shipping.

This is really a good product that works as advertised – as I’ve seen in several videos and read in testimonials that it works great on both hard floor and carpet though it’ll struggle on thick carpet. And because it swivels you can reach areas under your bed and table.

It however doesn’t come with any attachments you’ll need another handheld for upholstery, windows, curtains and the other nooks and crannies.

Biggest concern for me is the battery and how long will it last because according to their warranty terms and conditions it isn’t covered since it is a consumable item but you can always call them up at 01905 345 891 and verify.

If it lasts 5 years then this product will be well worth the money.

If you’re looking for a cordless and lightweight cleaner for carpet or bare floors and willing to spend a couple hundred bucks for it then this is good addition to any home.