Author: Garrick Dee Updated: July 21, 2020
Tags: Cordless Stick Vacuum
I hope you like the recommended products. Just an F.Y.I., there are affiliate links in this post, and if you click any of those links, I’ll earn a commission. 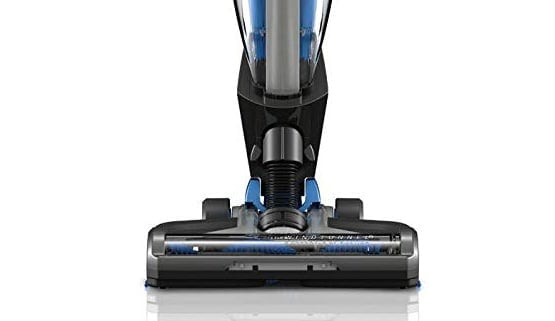 Early this year they launched the air cordless lift, an updated version of the air cordless series that started in the middle of 2014 that adds a “lift” feature that turns it into a canister vacuum.

This around $150 is a part of the air cordless series but this time instead of converting into a canister, this product converts from a stick to a handheld.

It uses the same 20-volt lithium ion as the other products in this line so if you’re thinking of buying more than one, you can interchange the batteries!

If you’re worried that this may be like other 2-in-1 that merely attaches a handheld on a stick and therefore does not have enough suction. Hoover says it comes with the same WindTunnel technology in their cordless uprights which means the brush roll has its own motor.

It is similar to the likes of Black + Decker BDH3600SV, VonHaus 600W 2-in-1, and the Bissell Bolt in terms of functionality but how does it fare in terms of performance? Let’s find out what the consumers think and the features below.

What to expect from the Hoover Air Cordless Lift?

Even though this is technically a hand vacuum that is attached on a stick body, Hoover claims that unlike other 2-in-1 products it will have great suction even when used as a stick vac because it uses the same WindTunnel technology that their best-selling Air Cordless uprights is using. 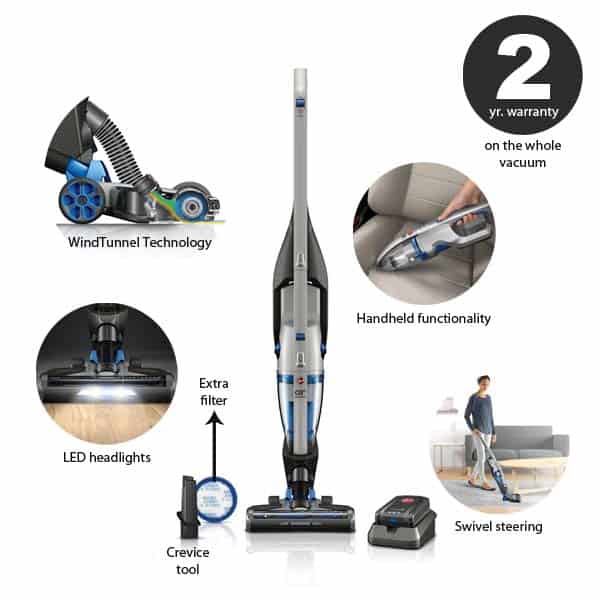 It only comes with one 20-volt lithium ion battery so don’t expect a lot in terms of run time. The tech specs say that it will only run for 15 minutes and will take 9 hours to recharge so buying an extra battery would be your best case scenario so you won’t have too much down time when you’re recharging one battery.

Length-wise it is the same as the Air Cordless Lift at 44 inches so it should be enough length for taller people to use without bending over. In terms of attachments it only comes with one – a crevice tool.

On bare floors it will do good job because it gives you the option to turn off the motorized brush. This also prevents scratching expensive hardwood surface – just in case your home has it. If you look closely at the floor tool, it has an area where it funnels larger pieces of debris like cereal – this prevents the dreaded snowplow effect where large pieces of dirt only get pushed around.

On carpet it will still be able to pick up surface dirt thanks to the brush roll powered by its own digital motor. This could be the reason why run time is so low at just 15 minutes. If your home is fully carpeted then this would only be rendered as a spot cleaner at best. If you still want cordless functionality then you’ll be better off with the air cordless upright or lift that offers a longer 50 minute run time from two lithium ion batteries.

On carpet it shouldn’t have any problems cleaning pet hair but on stairs and upholstery it will have some issues because it lacks a dedicated pet hair attachment. One option would be buying a handheld with a dedicated tool for the job like the Black + Decker BDH2000FL or getting the more expensive BH52120PC that comes with a motorized turbo tool attachment. The later would be $30 more expensive.

This is where the versatility comes in. At a push of a button, you can detach the handheld portion of this machine and use it to clean upholstery. It comes with a crevice tool to extend the reach but that’s it. If you’re will to pay an extra 30 bucks you can get this with the turbo tool attachment that allows this to clean stuff like pet hair and lint off fabric upholstery and stairs.

If you buy the BH52100PC it will only come with a crevice tool. Buying the BH52120PC which costs around $30 more adds a motorized turbo tool to the mix.

Each of the two lithium ion batteries will take roughly 3 hours to charge according to Hoover.

Here are the steps in cleaning the filter…

Remember to clean the filter every 4 to 6 uses and make sure that it is dry before you attach it in the vacuum. Filter should last the lifetime of this machine.

According to Hoover it will run for about 15 minutes.

It comes with a 2 year warranty on the vacuum and motor.

Overall consumers loved the versatility of this product – it had good suction, great at picking up pet hair and it doubles as a hand vacuum. The latter is what gives it an edge over the Hoover Linx Stick. However those who were able to compare this side by side with the Linx Stick said that it had less suction than Linx and the main reason why you’d pick this over that older model is if you needed the handheld functionality.

What this video and see what I mean…

Notice the dirt cup of the Air Cordless 2 in 1, as the dirt comes it, some of it goes on the filter and clogs it. This could be responsible for some of the lost suction power while the older Linx does not have this problem.

Both are noisy and have short run times but the air cordless has an even longer charge time – 9 hours. This is another reason why some consumers gave a lower rating.
But despite all the negatives, this product still got a solid rating thanks to the additional features it had – LED headlights, swivel steering, easy assembly and it is very light.

Consumers do seem to agree that even it has decent suction. It will not replace an upright in terms of being a deep cleaning machine. The short run time and lack of suction make that impossible but if you’re looking for an all-around cleaner, this would be a great option.

You can buy this versatile stick and handheld vacuum from Amazon for just a little over $100 but it isn’t brand new.

This versatile 2-in-1 cleaner would be great for small homes where having a full upright vacuum would be impractical because it is heavy and it takes up a lot of space. This would be an upgrade over a hand vacuum because you can use it as a stick vacuum and you don’t need to buy another product as long as you don’t need to clean a large area.

It does have a short 15 minute run time but that didn’t stop the Hoover Linx Stick from being a best seller because it has good suction and based on initial reviews so far this product has pretty good suction.

This vacuum would be a good successor to the Linx Stick, a version 2.0 if you want to call it that because of the handheld option but the long recharge time is a big bummer so you’ll have to weigh your options. Also there are consumers that say that this has less suction than the Linx partly because the filter clogs up pretty fast as the dirt cup gets filled up.

If you’re a Hoover loyalist then consider buying their other cordless cleaners which gives you the option of swapping out batteries, another would be buying the higher end models like the air cordless upright and air cordless lift. The choice is yours.