Author: Garrick Dee Updated: November 4, 2020
Tags: Cordless Stick Vacuum
I hope you like the recommended products. Just an F.Y.I., there are affiliate links in this post, and if you click any of those links, I’ll earn a commission.

Engineers in Hoover are busy right now coming up with new products. 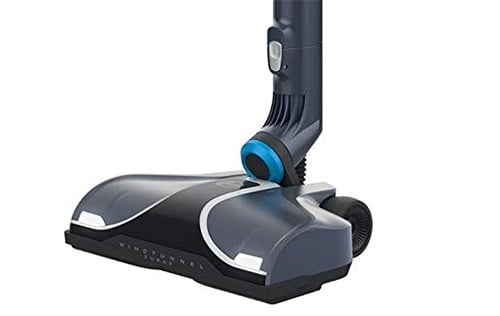 After releasing the Hoover Cruise just a few months ago, they’ve got two new product lines – the Fusion and the React series.

To be more specific we’ll be looking at the REACT stick vacuum series in this review. I’ve already covered the upright and you can read about it here.

The React series is a brand new series from Hoover and a clear upgrade over the Cruise which had several drawbacks.

It has a brand new battery that will run for up to 27 minutes, new LED headlights and a bunch of tools that’ll clean your entire home.

All of these have the same motor and performance and much like the Dyson V6 and V8, the difference lies in the tools that come along with it.

Features at a glance:

What to expect from the Hoover REACT stick vacuum?

The REACT is a brand new line from Hoover that’s a mixture of stick and upright vacuums.

Much like the Dyson cordless series, the REACT stick utilizes a similar design which motor on one end and floor tool on another connected to a tube that’s removable.

This design makes it allows you to use this as a stick and handheld vacuum.

And Hoover several improvements that they hope would bridge the gap between them and market leaders Dyson.

These are sensors at the bottom of the main cleaning head automatically detect any change in floor type and adjusts brush speed automatically.

This helps optimize performance automatically when transitioning from bare floor to carpet or vice versa.

When cleaning carpets, brush roll spins faster and slows down when it moves to bare floor. In a sense, this Hoover REACTS to what kind of surface you’re cleaning and adjusts the settings for you. Get it?

Powering this cordless is a ONE PWR lithium-ion battery that according to Hoover will last 3 times longer than the leading brands. According to reviews, the longest that I’ve read this vacuum run was around 30 minutes which isn’t exactly 3 times longer when you compare it to a Dyson or Shark.

This is Hoover’s equivalent to Dyson’s cyclonic filtration system that is capable of capturing dirt, dust and pet hair.

Hoover uses rapid charge technology to charge the lithium-ion battery in around 3 hours. That’s approximately around 30 minutes less than a Dyson V8.

Take note that you will need to remove the battery to recharge this. You cannot charge this using the wall-mounted bracket. 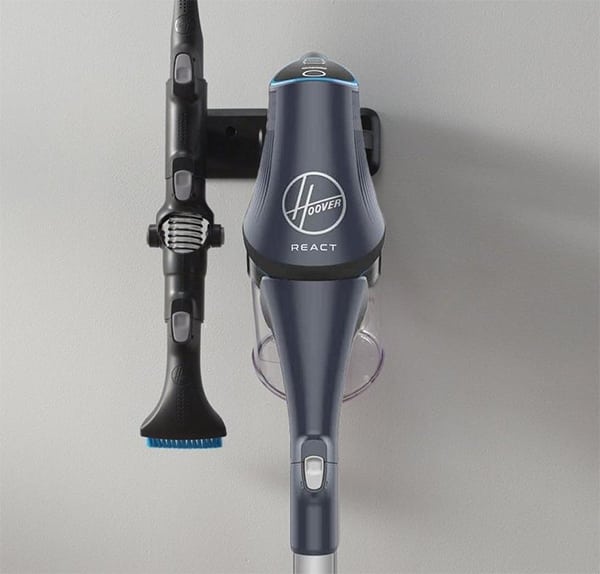 Since this vacuum isn’t self-standing, it comes with a wall mountable bracket for easy storage with room to store some of the other tools like the crevice/brush tool.

Unfortunately, this bracket will not charge your Hoover unlike the Dyson V8 and V6 cordless. 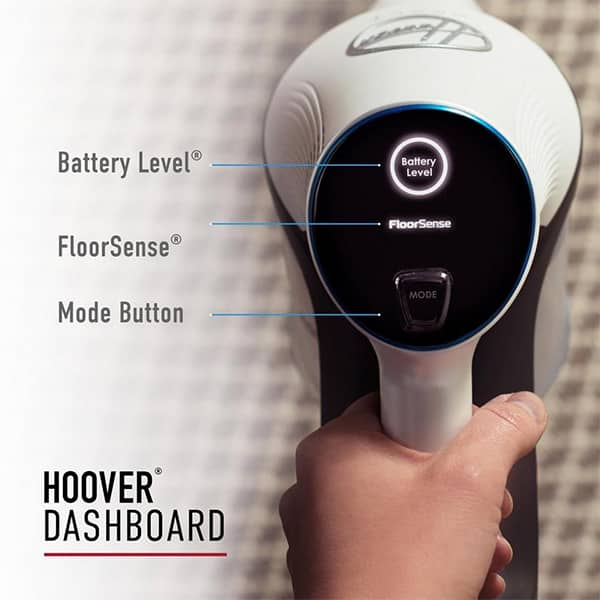 At the back of the motor, you’ll get easy access to the battery level, floor sense indicator, and mode button.

Hoover calls this the XL dirt cup. To be more specific, it can hold around 0.62 liters of dry dirt. It won’t give you upright level capacity but it has decent size. 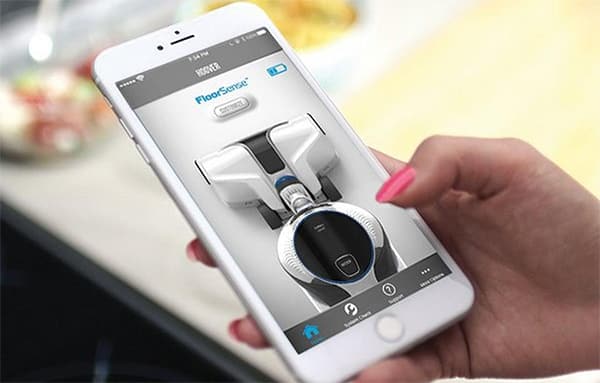 It also comes with a smartphone Hoover app that allows users to monitor the status of the vacuum such as battery life and help with maintenance tasks needed.

All these variants have the same motor, battery and dirt cup. Each will differ in the tools that come along with it.

The REACT series stick vacuums come with brush roll settings – one for bare floor and another for carpet.

On bare floor, the brush roll slows down that lessens the risk of it kicking large bits of debris around.

It won’t perform as well as the soft roller brush found in the Dyson V8 Absolute and Shark IONFlex when it comes to cleaning up large bits of dirt but performance should be decent.

It does have an elevated part at the middle of the cleaning head that’ll accommodate larger particles of dirt.

The slow spinning brush roll, however, will do wonders in picking up dust and with the LED headlights, it’ll be easier to track dust underneath furniture.

In carpet mode, the motorized brush spins at a faster rate which turns up the agitation.

Since this is a cordless vacuum, don’t expect Miele-level deep cleaning but consumers were pretty happy with how this product performed.

It is capable of picking up dirt and pet hair on carpet but again this will not deep clean.

For in-between cleanups, this is a great tool to have.

If you have pets at home then you’ll have to pick the “Pet” variant which is the BH53220.

It comes with the same main cleaning head as the other variants but it has the mini-turbo brush for cleaning pet hair on upholstery.

There were a lot of happy consumers who praised the cleaning performance of this vacuum.

One consumer said it was well designed and very powerful. It picked up well on both bare floor and carpet but the floor sense technology wasn’t perfect.

On carpet, it would take some time to adjust (sometimes it doesn’t work) but it isn’t a big deal because you can manually control the brush roll but it’s something to keep in mind.

Pet owners were among the happy customers saying it picked up a lot of pet hair but there were also complaints of hair clogging inside the bin.

Speaking of the dirt bin, even if Hoover says it has an “XL sized” dirt cup, it still pales in comparison with an upright that can hold easily over 1 liter. This only holds around 0.65 liters.

Those who are expecting upright performance should be realistic because this won’t match it in terms of capacity and performance. But it makes up for it with the versatility it brings to the table.

LED lights are not as bright as some people had hoped.

Another potential issue would be the tools that do not have any locks but only rely on friction. Unlike a Dyson where every attachment clicks into place, this vacuum does not have that feature.

Run time can be as long as 35 minutes but you’ll have to remove the battery and plug it on a separate charge because you cannot charge the vacuum using the wall mounted bracket.

You can buy this direct from Hoover.com or from Amazon.com where you can avail of the free 2-day shipping if you sign up to the Amazon Prime program. Currently, though, Amazon Hoover only has two of the variants available while Hoover has all four.

The Hoover REACT provides similar versatility as a Dyson but at a cheaper price so it’s a viable alternative since it is a capable cleaner. But do not expect the same level of sophistication found in the Dyson.

It has a myriad of interchangeable tools that make this versatile with an LED headlight to help track dust. And an app that helps connects to the vacuum and tells you the battery status, usage time and register with Hoover for warranty purposes.

There are four different variants each with a different set of tools that will fit different needs.