If I could build the perfect vacuum, I’d put in a strong motor, a couple of side brushes and a mop so I don’t have to do that task manually. 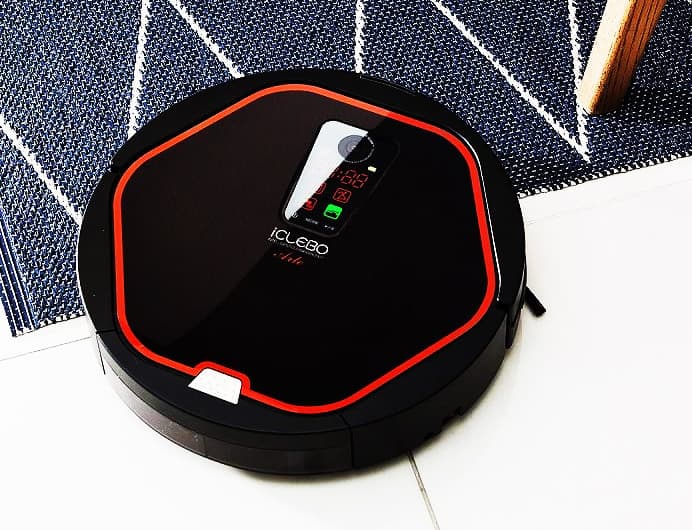 iClebo has done all three but is it the perfect robot vacuum?

You may have not heard of the iClebo Arte YCR-M05-10 robot vacuum. But it’s a popular brand in Korea were it competes with Samsung as top dog in this niche.

It also is popular in Europe and Asia. Reading their product description, it claims to “clean up to 94% more than other robots”.

Now I don’t know who the “other robots” are but those are pretty strong claims.

It also says that it got the highest score in the Global Standard Certification procedure test which is one of the top 3 German Magazines.

Here’s the screen shot of the article I found in iClebo’s site.

I added this review here because I saw it being featured as one of the best robot vacuums in Top Ten Reviews so I decided to investigate and here’s what I found out.

This is one of the very few robot vacuums with a mop function but it does not have a water tank like the Moneual Rydis H68.

If you want to use the wet mop feature, you have to pre-soak the microfiber cloth before attaching it. 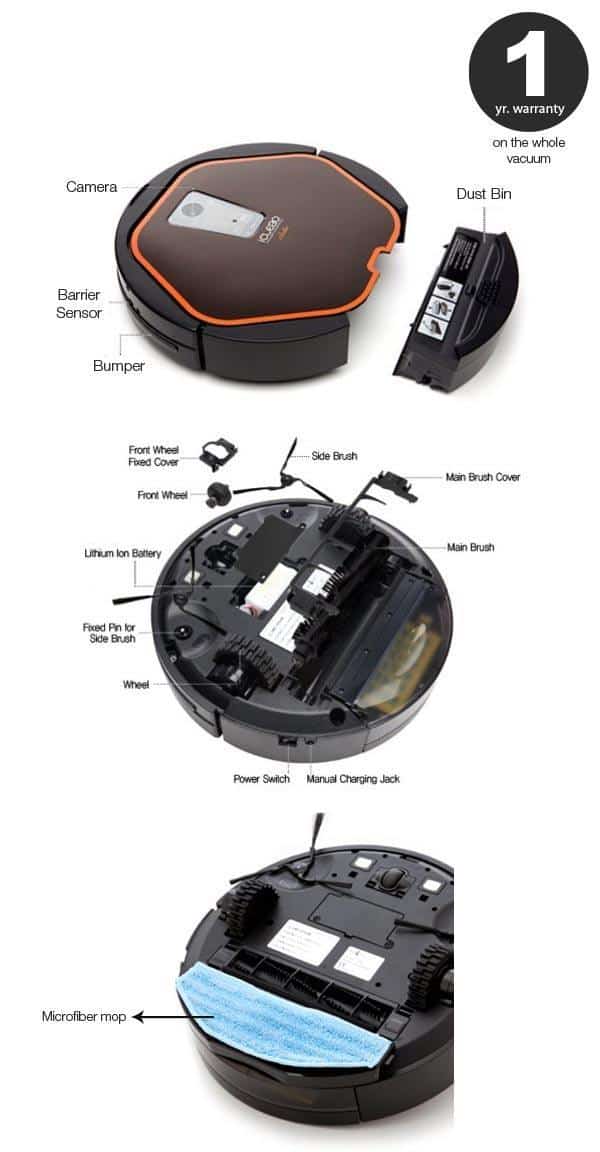 One huge advantage this product has over the Roomba or Neato is the lithium ion batteries that it uses that takes around 100 minutes to charge and will run for over 2 hours.

In a nutshell this navigates both like a Neato and Roomba, let me explain.

It has 5 cleaning modes. The first mode which is called navigation mode tells the robot to move in a back and forth motion.

I’m not sure if it cleans the perimeter first before moving toward the middle. But looking at the illustration that may not be the case.

The third mode is a random cleaning pattern that works best in a dirty room.

It’ll go in a random pattern for a full 60 minutes then it stops. Other modes include the spot and max mode that combines the first and third cleaning mode.

Then the final option is the wet mop, where you attached the damp microfiber cloth and it goes in a straight zigzag pattern.

Here are the five cleaning modes to illustrate:

If you’re curious on how it navigates, it uses a combination of 15 sensors, including 3 in front of the bumper to navigate around obstacles.

In addition to that it also has a camera mounted on top to “vision map” the room.

It is pretty vague in its description on these sensors and camera work, but here are some interesting numbers.

It says that the sensors detect the environment around it 200 times PER second and the navigation software going through 10,800 calculations per second. The camera takes photos at a rate of 24 frames per second.

iClebo does not specify whether this would be able to do multiple rooms.

Manual states that it’ll take around 100 minutes to fully charge.

As with robots with side brushes and brushrolls, hair accumulates on these two parts so it is important to regularly clean these two parts along with the wheels so that it does not wear out.

Side brushes can be removed by taking off the screws.

It comes with a brush cleaning tool to help take off dirt and hair.

Expect around 160 minutes on hard floors and less on carpet.

Warranty terms aren’t clear on Amazon so if you’re interested in buying this contact Amazon or the online store you’re purchasing it from first before purchasing to avoid any issues.

In the very few reviews I’ve read it was good in hard floors picking up a lot of the pet hair and dust on this surface as an added bonus it has a mop that you can use as a dry or wet mop.

Take note that it doesn’t have a water container so you’ll have to manual damp the microfiber pad to wet mop.

Performance on a tiled surface…

The presence of the motorize brush roll makes this capable of picking up dirt on carpet.

There weren’t any reviews on its performance on carpet yet so if you’ve purchased on and used it on carpet just let me know how it performed in the comments below.

The manufacturer claims that it can clear obstacles around 20mm which is just for ¾ of an inch so it can climb most rugs and clean them.

Again there are not too many reviews about pet owners here. Though one consumer mentioned having success dealing with pet hair on hard floors.

This is a promo video from iClebo…

While this is a popular product in Europe and Asia, it isn’t as popular in the United States because of the lack of customer support here.

It only got 3 reviews in Amazon and all of it was 5 stars. All the consumers were happy with the performance and navigation saying that had no problem with navigating. It was pretty good at removing dust and hair off hard surfaces.

It’s been over 6 months since I first published this review an now it’s time to give an update on consumer feedback.

It still maintains an overall rating in Amazon but the reviews where mixed in terms of cleaning performance and navigation (a few people also left a review in this review – thanks guys). Some say that it was great at picking up dirt, dust and pet hair while others said it struggled.

Another issue would be navigation. Some revies say that it struggles maneuvering around furniture legs. Sometimes it gets stuck. But other reviews say that navigation was okay.

Seems to me that these may be lemon units because Suzanne (an Amazon consumer) said that iClebo’s director of sales called her and said they had a 5% failure rate.

It had a grand total of 2 reviews one gave it a 5 star and the other 1 star. The 5-star review basically said it had no problem navigating their 4 bedroom home that had thick Persian rug, tiles and carpet. It was easy to use and clean and it cleaned pretty well.

The consumer who gave a negative review said it didn’t navigate well but mentioned that he bought it oversees and it was an earlier model that had a wheel module issue.

You can buy this robotic vacuum from Amazon for less than $320. And it’ll come with their free 2-day shipping if you join Prime.

Extended warranties of up to 3 years are also available if you want that extra peace of mind.

Despite of the high tech features this is a relative unknown brand in the United States so performance in the real world is a big question mark with the limited number of reviews.

Also warranty claim will be an issue if you’ll not purchase it in a reputable store like Amazon.

But if you’re the type who likes to try something new then the iClebo Arte YCR M05-10 is worth a try.

It also has a mop feature (you don’t need to buy a separate robot for this) just in case you are looking for to wet mop your tiled floors.