Infinuvo is a relative unknown brand compared more established brands like iRobot and Neato but it has introduced unique features that deserve a long hard look. 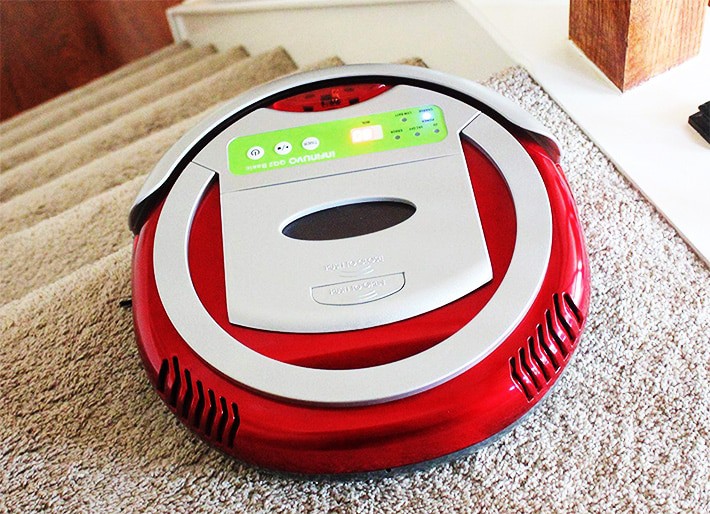 One of those features is the UV tube that they claim to provide disinfection.

Price wise it is one of the more affordable robotic vacuums at under $150 but it lacks several key features like scheduling and navigation.

Let’s look at this closely and see if it’s one of those “diamond-in-the-rough” products that’ll outperform its price point.

What to expect from the Infinuvo CleanMate QQ-2 Basic?

The Infinuvo CleanMate QQ-2 doesn’t have a long list of features. It is a pretty basic sweeper that’ll work mostly on hard surfaces.

One unique feature though is the Ultra Violet tube that they claim can kill bacteria and allergens – if it works as advertised is good news for allergy suffers.

Also you can set the patterns repetitively, so for example you can program it to start from along wall side pattern and transition to a spiral pattern and so on.

One downside to this pre-programed feature is it isn’t flexible enough to clean oddly shaped rooms since it doesn’t have navigation software or sensors present in an iRobot or Neato that’ll map out a room.

It does come with a remote control that has arrows on it wherein you control where it goes – like an RC car :D.

Since it doesn’t have a charging base, once the battery is exhausted it comes back out from darker areas and stop in a lighted area.

That means if batter is low and it’s under a furniture it’ll come back out so you won’t need to look for it.

Remember, before using it to remove all possible obstacles that can get in the way, and that includes rugs.

Nope, it doesn’t have this feature.

It is not available in this model.

Manual stats that charging time is around 3-hours, some consumers though reported that it took around 3.5 hours – not much of a discrepancy.

Both the filter and dirt canister are washable. Always check the filter visually after every use if it needs to be cleaned.

If you don’t have time to wait for the filter to dry, use compressed air to clean.

Manual says it will give you around 80-minutes per 3 hour charge.

Amazon currently doesn’t have any of these robots available at the moment (only through 3rd party retailers).

You’ll have to view the seller’s return policy here. If bought directly from Infinuvo, it comes with a 1-year warranty on the robot and 6-months on the battery.

This robot will work best on bare floor surface. The side brush helps it clean the edges and sweet dust from base boards.

The motorized brush work well in picking up dust and other smaller debris but it doesn’t have enough power to pick up heavy stuff though.

Do not use this on medium to plush carpet because it doesn’t have enough power and the brushes aren’t stiff enough to pick up dirt on this surface.

Not designed to clean moderately to really plush rugs, it’ll only work on thin rugs. Careful with the tassels, it can get stuck on the motorized brush.

Some consumers though mentioned that it can get stuck on the edges and won’t pick up lint. Infinuvo recommends folding the edges of rugs so that the robot doesn’t get stuck.

Since it has a brush roll, it will pick up pet hair but since the brushes aren’t stiff, it’ll not work well cleaning pet hair on carpet as it will on hard floors. Pet owners were among the satisfied customers so it does score well on non-carpeted flooring.

Currently, only 29 people left a review in Amazon and a majority were pretty satisfied with the cleaning performance on hard floor where it was primarily used.

Consumers commented on how well it picked up dust and pet hair but some cautioned about it not being able to pick up bigger debris than dust because of the lack of power.

Pet owners were among the satisfied consumers and they were pretty happy on how it cleaned pet hair.

Though the brush needs to be cleaned up regularly so that it doesn’t bog down but fortunately it is easy to remove and clean.

Complaints were about it not being able to pick up dirt on carpet, getting stuck under furniture and edges of mats.

But to be fair with Infinuvo, they did mention that it was only designed for thin carpet and they mentioned in the manual to fold the mat before turning on the robot.

Not much feedback about the UV light that supposedly kills bacteria and one consumer said it was a gimmick since UV rays need at 15 seconds to have an effect on the bacteria so that is up to debate.

One of the best online stores to get this is Amazon – at just under $120.

This is a basic sweeper robot for light jobs on hard floors a small to medium sized room and it would be perfect for people who would want a robot vacuum but couldn’t afford higher-end brands like iRobot, Neato or an LG.

Take note that it doesn’t have the sophisticated navigation system nor it has a charging dock, what it has is 5 pre-programmed patterns that can be set repetitively one after another depending on the size of your room.

You can also manually control where it cleans using the remote control.

At under $150, it is one of the cheaper robot cleaners you can find in the market with basic functionality so if you’re not really picky and want some help in small clean-ups then this could be the product for you.