In one of my previous reviews, I featured the Infinuvo CleanMate QQ-2 Basic which was one of the more affordable robot vacuums at just a little over $130. 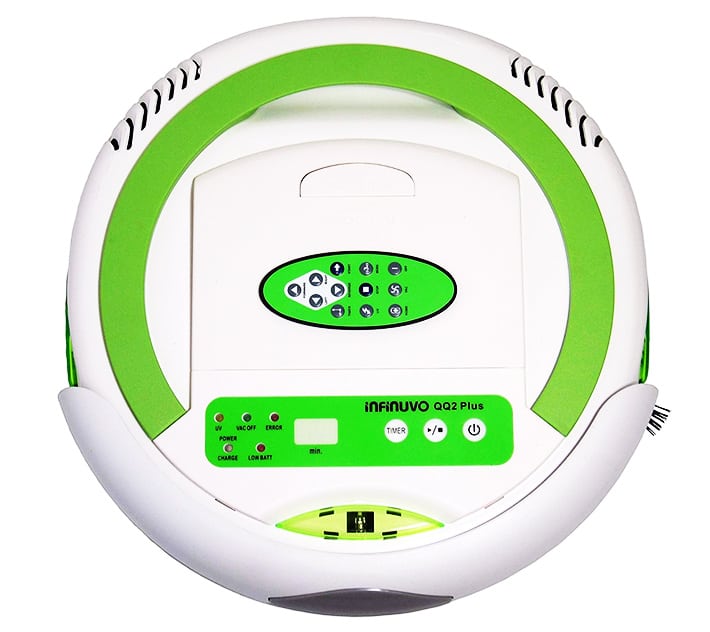 In this review I’ll feature a model that is a step up, the QQ-2 Plus and it costs around $45 more.

The QQ-2 Plus has pretty much the same features as the basic the difference is it has a charging dock where the robot can automatically go to after completing its cleaning cycle or if it runs out of battery.

Another feature not found in the “Basic” variant would be the scheduling. You can schedule this to autonomously clean up to 7 times a week.

Take note that this is different from the “QQ-2 Plus” because that one doesn’t have the “Sonic Wall” in the package.

What to expect from the Infinuvo CleanMate QQ-2 Plus II?

Like what I’ve said at the beginning of this review, if you’re in the market for an Infinuvo this is the one to get because it has 7 day scheduling, a charging dock plus a sonic wall.

The sonic wall is similar to Roomba’s virtual wall that it allows you to block off areas that you don’t want the robot to get into.

Unlike the Neato or the Roomba, the QQ-2 Plus isn’t as smart, what they’ve done is equip this robot with 5 pre-programmed cleaning patterns. By default it’ll run all 5 in this order:

Infinuvo claims that by running all 5 modes that’ll it’ll be able to reach all areas in a room but you can select a specific mode that you want if you choose to.

It does have a wall sensor that will tell the robot when it encounters an object to turn and move around it.

It will return to its docking station or at least try to using a light sensor, when it fails to find it in 30 minutes, it’ll automatically go in sleep mode so battery doesn’t run out.

In a review by RobotShop, this robot took around 30 minutes to complete a room. But that was because they had to wait for it to complete a cycle. It was able to return to home base but it did struggle going through the maze.

You can schedule this robot to clean autonomously once a day, 7 days a week.

The manual says that the charging time is between 3 to 3.5 hours.

The filters included with the QQ-2 Plus is washable and is relatively easy to remove. Just press the “dust bin open” button, removing the dust bin cover and removing the air filter.

Don’t forget to regularly clean and de-clog the vacuum inlet, motorized brush and side brushes while you’re at it.

A cleaning brush is included in the package to make cleaning the motorized brush easier.

Based on the user manual and reviews, expect around 80 minutes of run time.

It comes with a 1 year warranty on the robot and 6 months on the battery.

This one is only build for light duty cleaning because it only has a small opening and the design of the motorized brush doesn’t really grab dirt off floors rather it pushes it in front of the already small opening (I already mentioned) where suction takes over, the problem this this robot has a very weak vacuum motor so it can’t pick up much.

It will struggle with light but larger debris like paper and pet hair as well as heavier ones like bolts and nuts.

Just like what I’ve said in the bare floor cleaning section, it won’t do well on carpet because of the weak vacuum motor and the lack of pickup ability from the motorized brush.

Don’t use this on anything but the thinnest of carpets.

Another thing to point out is that this will not clean black carpet or rugs.

It won’t be able to climb anything over half a centimetre, so if you have thick rugs it’ll be better to move that out of the way.

This robot has a brush so it is capable of cleaning pet hair from bare floor and low pile rugs/carpet. The biggest issue would be the size of the suction chamber where large clumps of pet hair will not go through.

If you have lots of pets you may want to consider another robot. I’ve published an article discussing the best robot vacuums for pet hair – make sure to check that guide out.

Less than 20 people left a review but what they said was pretty consistent with the findings in RobotShop, consumers who liked it said it did well in picking up small and light debris like dust and short pet hair but it struggled with larger and heavy debris.

One thing that a lot of consumers liked was the price because it costs half that of a Neato and almost 3 times less than an iRobot.

There are also issues with the robot’s brush trying to suck in the tassels of rugs thus interrupting the cleaning cycle. But to be fair, this is a common issue with all robot vacuums right now that have a brush.

Review from other sites

One of my personal favourite robot review sites, they did a thorough review on several key aspects of this robot and found out that it did a decent job on bare floor picking up light dirt but for more heavy duty tasks, it wasn’t up to par because of the weak suction and small vacuum inlet that tends to get clogged easily.

Navigation was another weak point as it didn’t have any wall sensor that allows it to follow walls like that of a Roomba or a Neato.

You can buy this in Amazon but unfortunately it is out of stock.

This product would be great for people who have mostly hard floors in their homes who would want help in small clean up tasks like dust cleaning under furniture.

It lacks power to clean more than thin pile carpet. And since the suction chamber is small, only small debris will fit through it.

Navigation wise, it is pretty ancient compared to more sophisticated robots like the Hom Bot, Neato and Roomba, as the absence of a navigation system will cause this to bump into objects often and you will need to babysit it often, more so if the room has lots of clutter or furniture.

Price wise it is one of the cheapest brands in the market but like they say, you get what you pay for so do not expect a lot from this.