In a lot of ways the Roomba 760 is similar to the 770, the only difference is it doesn’t have a full bin indicator so if you don’t mind not having that feature you’ll only have to spend $320 for this. 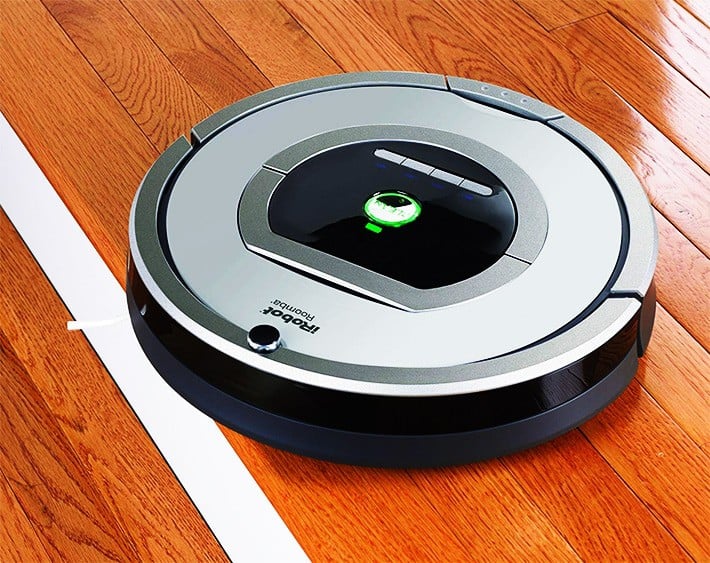 Unfortunately Roomba has discontinued the production of the 700 series and has replaced it with the Roomba 860. You can also check out their latest 900 series Roomba vacuums that now have a more efficient navigation and better cleaning performance.

Size wise and feature wise, they are similar and the 760 has a slightly higher rating in Amazon (just in case you care).

Folks with allergies looking for a good value robot vacuum with top of the line features but don’t want to pay the extra $100 to $200 for the improved dirt detection system should have a long look at this.

What to expect from the iRobot Roomba 760?

It comes with the same 3-stage cleaning system found in all Roomba 700 robots.

A side brush reaches the edges, the two counter rotating brushes act as a broom and dustpan and finally suction pushes everything into its dirt bin.

Inside the dirt bin are two HEPA filters that block most of the allergens from coming back out.

It is a bagless system so there are no bags to replace and the filters are washable.

Like all 700 series Roombas, the 760 uses the iAdapt technology that makes 60 plus decisions per second and while it may move at a random motion, it learns as it goes so the longer you use it in your home, the more efficient it’ll be as it learns the layout and shape of the rooms.

It might miss some areas but those are minimal.

As with all robot vacuums, consumers have to do their part and clear out all loose wires, light rugs, toys, litter boxes, scattered paper, etc. because these are potential road blocks that can slow it down.

It can clean multiple rooms but remember to use the virtual wall to block off rooms you don’t want it to enter and have at least 3 feet of clear space around the docking station.

No, so far none of the robot vacuums in the market can do that.

Since this uses a HEPA filter, iRobot recommends replacing it once every 2 – 3 months but replace it more frequently if used more often.

Manual says filters are washable but consumers recommend using compressed air to clean it. I would avoid washing the HEPA filter just to be sure. Most HEPA filters used by robotic companies use paper element to filter out microscopic dust and wetting this part may damage it.

It’ll last around 90 minutes on average based on reviews.

All iRobot vacuums have a 1-year warranty on the robot plus 6-months on the battery.

Similar to other 700 series Roombas, it does its best work on this surface, picking up pet hair and dust bunnies around the room and under furniture which some consumers love because uprights and most canister vacs can’t reach the deepest areas under a bed.

Take note that this will remove mostly loose dirt. Deep cleaning is not a robot vacuum’s strongest suite.

The 760 will do a pretty decent job on carpet based on reviews. But you’ll have to temper expectations because a robot vacuum will not deep clean carpet. It functions best as an everyday cleaner that will keep dirt from piling up and lessen the need to bring out the upright.

Pet hair won’t be an issue as long as you don’t have a whole army of dogs inside your home.

It won’t have trouble transitioning from floor to rugs as long as the rug isn’t too thick.

Cleaning low to medium pile rugs won’t be an issue either but it will struggle with really thick shaggy rugs. Don’t forget to tuck in rug tassels because it is another trouble spot that could stop the robot in its tracks.

The twin brush system that iRobot uses in their product line is generally effective for cleaning pet hair. It will be equally effective on carpet and bare floor. But the bigger issue would be maintenance because hair and dander will stick on it.

Close to 80 people have left a review in Amazon with only a very few giving a negative review (only 7 so far).

Consumers were happy in terms of cleaning performance and navigation. Some of them say that the robot “learns” and “adapts” to the environment the longer you use it.

But I would take this claim with a grain of salt because all 700 series robots still use an IR based navigation.

This means it will go in a random direction when it bumps into an object. It doesn’t have the SLAM algorithm found in the 980 so it won’t be as smart.

What people appreciate is its ability to clean under furniture and sweep up pet hair.

Biggest concern would be the motorized brush needing regular cleaning. Removing the brush roll isn’t hard but this can be a tedious process especially for homes with lots of pets.

There were also complaints about this robot “eating” loose wires. Again, iRobot advises their customers to clear the area of any loose wire before letting the robot clean because loose wire will stop this robot in its tracks.

iRobot customers who gave a positive review were happy with how easy it is to use and schedule.

It was so effective that it filled up the dirt bin pretty quick. This is another issue if you have a large home – the need to empty the bin often. But this is a testament to the effectiveness of this robot.

Consumers here really like the ability to schedule because it save them tons of time vacuuming on their own.

A lot of complaints centered on the noise produced. One review said that this robot destroyed their rug.

To avoid issues with this, clean area rugs separately if it’s expensive.

Overall it received a pretty decent score in the iRobot store.

You can buy this in Amazon for about $320 and it’ll be eligible to their free 2-day shipping if you join Prime.

The Roomba 760 would be great for busy folks looking for a helper that will clean their home for them. In fact any decent robot vacuum will do this job. It has all the features you need from a good autonomous cleaner – scheduling, good agitation and decent suction.

There are some concerns about the noise and small dirt bin but that’s just a minor con compared to the time it frees up.

Remember that since it is a robot, it won’t act like a human but give it some time and it’ll learn and be more efficient as it adapts to your home’s surroundings.

One of the best valued Roombas in the market if you aren’t willing to or can’t afford the price tag of the higher-end 780 and 790.

All these variants come with the same style brushes, motor and scheduling feature.

Take note that it doesn’t come with a virtual lighthouse, improved intelligence nor it has any touch controls present in the 780 model and up.

But for the price it is a good investment for busy people looking for house cleaning assistance or pet owners looking for in keeping their floors free from pet hair.

iRobot also has newer variants in their product line and this includes the Roomba 880, 860, 960 and 980. Make sure to check all of these products and compare their features before making a purchase.