The LG Hom Bot 3.0 comes with features never before seen in robot vacuums such as an on-board camera and optical sensor for navigation. 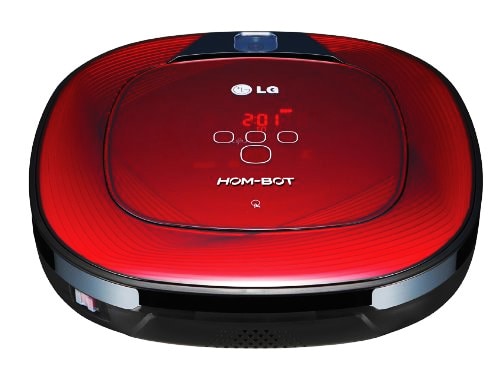 There’s also a turbo function to remove more stubborn dirt and a voice feature that tells you what exactly it’s doing plus more you just have to read the rest below.

All of these features though will set you back $550, more expensive than market leaders Neato and iRobot.

While the features will wow you, how does it perform in the more important task cleaning?

Well CNet says it isn’t up to par with the other two brands I’ve just mentioned saying that while it has all the bells and whistles, removing dirt is less than satisfactory.

It has 7 cleaning modes

See all the cleaning modes in action

This is the first robot I’ve seen that uses a camera for navigation. Without sounding too technical the camera and optical sensor maps out a snap shot of your room that work together to let the robot know where exactly it is and what areas needs to be cleaned.

This feature also allows it to remember the optimum cleaning routes around your room allowing this to do its job faster.

Remember to remove obstacles that get in the way like wires, toys, rugs, etc. because this will easily get stuck and it has a low clearance.

Nope. None of the robot vacuums does.

Dirt cup and HEPA filter is located in the middle and can be accessed by popping open the lid. A great feature here is the handle on the bin that makes it easy to remove.

In the package, there is a brush that you can use to clean the filter.

Since it is a HEPA filter I’m not sure if you can wash it, it wasn’t specified in the LG’s website or in Amazon so to be on the safe side don’t wash just clean it with the brush and replace it every 2 to 3 months.

LG claims that this robot has a 100-minute run time, Trusted Reviews however disagrees saying that it ran around an hour in their test.

There were few complaints about subpar customer service. One consumer did complain about the features that weren’t there. One was expecting a mop pad that wasn’t there in the package.

LG gives a 2 year warranty on the unit and 6 months on the battery.

In a test done by CNET it held its own picking up long grain rice on hard floors.

It however struggled a bit in the sand/saw dust test picking up slightly less than it did with the rice.

It didn’t fare as well on carpet, especially plush carpet.

Again referencing the test done by CNet, it picked up significantly less sawdust/sand on medium and low pile carpet versus the Neato XV Pro but it held its own against the Roomba 790.

Editors in Trusted Reviews mentioned that this will indeed struggle on thick carpet not because of weak suction on the contrary they said the strong suction combined with the low clearance caused bleaching on thick carpet.

It has a low clearance if your home has thick rugs, get them out of the way.

In CNet’s tests, it did a decent job cleaning pet hair of hard floors and medium pile carpet almost at par with the Roomba 790.

But not as good as the Neato XV, strangely though it didn’t do as well on low pile carpet.

Being an $800 robot vac, not a lot of people bought this product thus there were only a handful of reviews.

In those reviews consumers both who left positive and negative reviews mention that it had a tendency to get stuck.

And sometimes even without any obstacle in front of it so there is a bit of babysitting needed.

Well LG did mention in the manual that you need to remove potential obstacles on the floor like wires and rugs just to give you a heads up.

One thing that impressed a number of people here was the ability to learn and remember the layout of the room which is good and bad. This is good because it’ll know which obstacles to avoid. And bad because if you move anything it’ll think that the obstacle is there and will bump into it.

Another issue here mentioned in reviews is its shape, it has a tendency to scrape baseboards and/or furniture when it turns.

In terms of cleaning performance, it did well and most consumers use this on hard floors. Some use this on carpet and were pretty happy with the results.

There were some reported issues though on it not being able to return to the charging base on its own and not going under certain furniture.

Overall, consumers were happy with the navigation, suction and cleaning modes, particularly the “my space mode” that allows you to record the cleaning pattern.

They claimed this to be the best robot vacuum they’ve tested saying it was better than the more established Neato and iRobot.

While they liked all the features that this robot had, the high price and the subpar cleaning on carpet are the biggest reasons why they wouldn’t recommend this vacuum over a Neato.

You can buy this in Amazon however currently this is out of stock. A newer version is available and now with WiFi connectivity and it will cost around $550.

This newer version will be eligible to their free 2-day shipping if you join Prime.

This robot is great for folks with medium to large homes having mostly hard surfaces as this wouldn’t perform as well on thick carpet based on tests.

Remember that this isn’t completely hands free as you would need to babysit it at times when it gets stuck. As with all robots vacuums, prepping the area is key to a seamless operation.

Feature wise it has almost everything you want on an autonomous cleaner.

My favorite is the ability to “teach” it what route to take. It has two side brushes, a motorized brush and an easy to empty bin.

Unfortunately it is way too expensive for my taste given its limitations, I’d get the Roomba 780 or the Neato XV Pro over this. But this