Most robot vacuums available in the market right now do only one thing – they automate vacuuming of our floors. 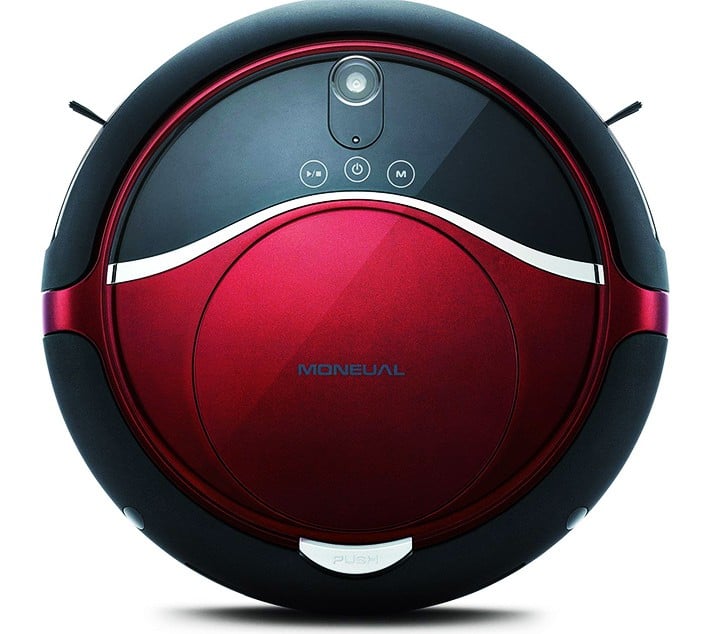 The Monueal Rydis H68 adds another function that’ll help out busy home owners free up time even more, it has its own mop and water tank!

Let’s put it this way, this is a robot vacuum with a Swiffer mop underneath it.

This is actually the third generation Rydis. The first one did have a mop but it was small and didn’t have a water tank.

So it quickly dries up and really isn’t very useful. In the second generation model, the water tank was optional.

Moneual heeded the complaints of consumers and made the mop three times bigger then added a water tank for good measure.

How did it perform?

Well you’ll have to scroll down to the review section to find out.

The two main features that stand out are the dual functionality of this robot – vacuum and mop (the latter is an industry first).

This robot uses a combination of the two side brushes, suction and a motorized beater bar to pick up dirt.

The microfiber mop covers over half of the underside (71 square inches). And it has a 5 ounce water tank that has three trickle holes to make sure the mop stays moist for up to 3 hours. 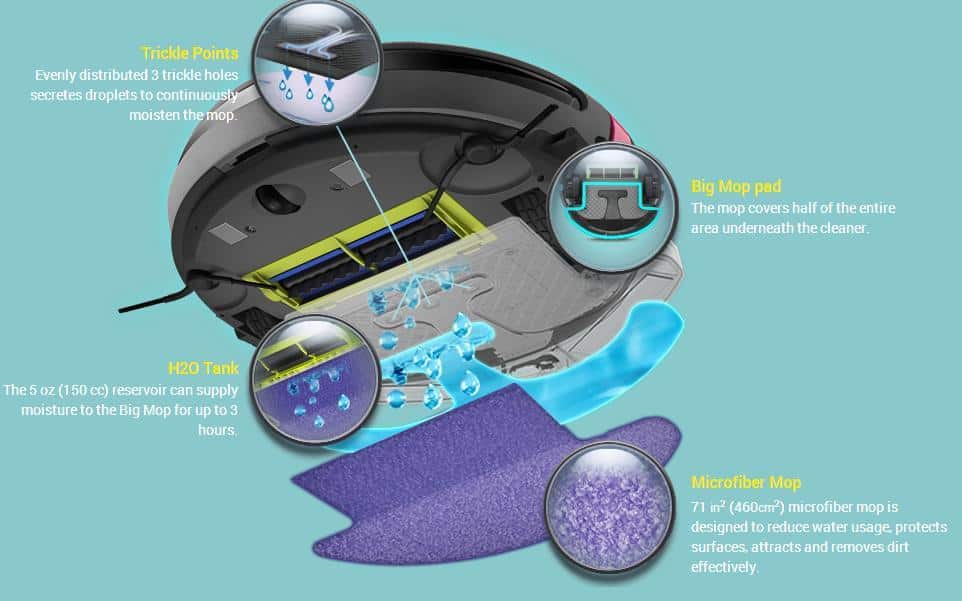 Moneual is pretty vague in describing how this robot navigates. They say that it uses the Smart Vision Mapping Technology, which basically is a sensor located on top of the robot to track its location.

If you look at this illustration by Moneual, the sensor fires signals to the ceiling to track its location.

It does have sensor cliffs so it does not fall off stairs, what it doesn’t have is a system that prevents it from going into areas you don’t want it to go to like the virtual wall system in the Roomba or the magnetic strips of a Neato.

This isn’t the infrared navigation system that iRobot or the laser guided system that Neato uses so I not sure if this robot will work in pitch black conditions.

To give you an idea how this robot will navigate, watch this…

The interesting feature is the shadow cleaning mode where it cleans an area that has a shadow – a good example is the area under the bed.

On the normal cleaning mode it has a random pattern that may tend to miss some spots here and there.

As with all robot vacuums, the critical parts to clean are the side brushes, motorized brush and wheels.

With the side brushes, you don’t need any screw drivers to remove it – it simply clips on and off.

You can remove the motorized brush by removing the green bracket around it. According to reviews, clean up isn’t hard. And all the info is available in the quick start guide and manual.

A full charge will run for approximately for an hour or so.

Moneual recommends to fully charge and discharge this at least 3 times to reach its full capacity in terms of run time.

The robot itself and the parts come with a one year warranty while the battery only comes with a 6 month warranty.

According to Moneual, the Rydis H68 uses a 5 step system to clean bare floors

Here’s the system in action…

Take note that the motorized brush isn’t as wide as a BotVac 80 or a Roomba 880 so this will struggle a bit to clean corners.

The mop obviously will only work in tiled, linoleum or hard wood surfaces. Don’t use it on concrete.

This would work great on carpets as well because you can use it to clean high traffic areas over and over.

The “deep clean” and “double deep clean” mode should work great in the dining and living room where there is a lot of foot traffic.

Understand that this vacuum will not deep clean carpet. And you can’t rely on this to be the primary vacuum. It is a maintenance cleaner that keeps dirt from piling.

The lower height has a disadvantage – it will not be able to transition well on medium to thick rugs, on some cases even thin rugs.

If your rugs has a lot of tassels, this too will be a roadblock for this robot as it’ll think that it’s an obstacle and go around it instead of going over it.

According to consumers, this has a threshold option that will allow it to climb up obstacles over 1cm high but you have to set it first or else it’ll not climb over it.

Here’s how it performed while trying to transition over rugs…

…Results aren’t very encouraging. On the rugs with tassels it didn’t even go over it even on the second try.

On the second rug it eventually got stuck

Based on reviews, it did fairly well on pet hair but again, I’ll remind you that this won’t do very well if there is a lot of pet hair to clean up because it struggles with heavy duty cleaning.

This would be great for in-between clean up tasks and when set at the right cleaning mode help pet owners keep pet hair from piling up on carpet or underneath furniture.

Consumers have been relative happy with the performance of this hybrid robot but they cautioned about the limitations of it.

Cleaning performance got an okay rating with consumers saying that it helped them keep their floors clean and with the moping function, it helped pick up fine dust that’s often the toughest to clean on hard surfaces.

Some even put the mopping function rivaled that of a Scooba, a floor scrubbing robot that costs over $500.

Navigation is another story because on default mode it goes on a random pattern based on the video reviews I’ve seen.

Even if the random navigation is in theory more thorough, it does tend to miss spots here and there. Despite the claims of  Moneual, this robot vacuum isn’t a deep cleaning machine.

You will need a good upright vacuum for that task. Another issue would be transitioning from bare floor to carpet. If the carpet is too thick, it’ll just go around it.

One consumer said that the cliff sensors does not seem to work as his fell off a “cliff” in his bathroom with a 1.5″ drop.

Take note that this robot uses optical sensors so it may not work as well in a poorly lit environment.

So you can’t turn this on, turn off the lights and expect this robot to navigate around seamlessly.

It also does not have any containment system. So if you don’t want it to go to a certain area, you’ve got t a physical barrier.

Another downside is the scheduling feature. It does not have the flexibility of setting it a different times. Once you set the schedule, it will clean at the same time everyday.

There’s another option where the robot will clean automatically one hour after you schedule it.

You can buy this robot from Amazon but unfortunately they don’t have it in stock right now.

This robot vacuum would be great for homes with mostly hard surfaces because it can mop and at the same time vacuum.

It saves you money because you don’t need to buy a separate robot just to mop. It saves you time as well because well you don’t have to mop.

Just be mindful of the limitations and the cons of this product before taking the plunge.

First, it will struggle on uneven surfaces and will have difficulty climbing over rugs even though the rug is not that thick. It’ll have the same problems on rugs with tassels as it won’t transition over it.

Despite what seems to be an advanced navigation, on default cleaning mode, it seems to go on a random pattern and will have difficulty cleaning more than one room at a time.

It does not have any containment system similar to an iRobot or Neato that prevents it to go into areas you don’t it to go into.

This is best utilized in cleaning on a per room basis with some babysitting needed.

The mop system is a nice idea but it is still not perfect.