The Rydis MR6550 is one of the few hybrid vacuum slash mop cleaners in the market that combine suction and mopping in one package. 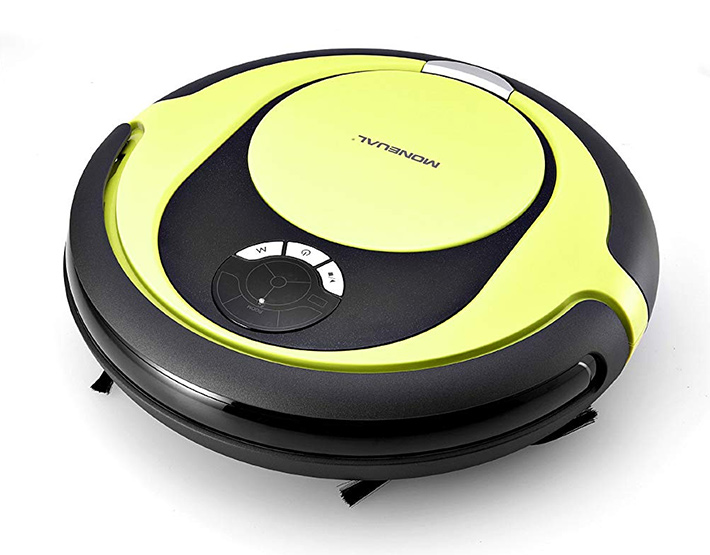 Take note that the mop will only work on hard floors and since it uses a small strip of microfiber, its effectiveness is a big question mark as we’ll find out in this review.

There are two features that make this a good budget alternative to the more expensive Roomba or Neato, if you’re don’t want to spend an extra few hundred dollars.

First it uses a lithium phosphate battery that Moneual claims to have at least 1000 recharge cycles.

Other brands that use nickel cadmium only have a maximum of 500 recharge cycles.

Second instead of a standard DC motor, it uses a Brushless DC motor that runs up to 10 times longer.

Aside from the Brushless DC motor and lithium phosphate battery, the Rydis MR6550 comes with a motorized agitator made from rubber and two side brushes to sweep dirt into the path of the roller where suction takes over.

The dirt bin can only hold around 600 mils so it’s on the small side meaning you’ll need to empty this often.

Here’s a quick overview of the features

Moneual was pretty vague on how the Rydis navigates, from what I’ve read in their website in the default setting it detects the “most efficient” cleaning path.

In this review in Apartment Therapy, it says that it had a random pattern that is similar to that of a Roomba and it took a longer time to clean.

It has 7 cleaning modes which makes it somewhat flexible. 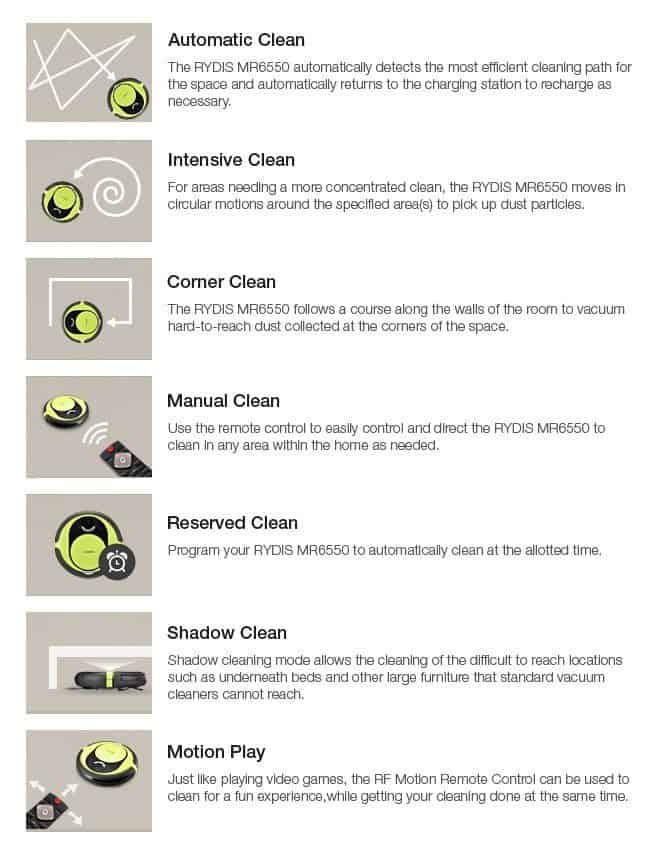 It has cliff and object sensors so it will not fall off from stairs and will not bump into objects hard to minimize scraping on your furniture.

It can be scheduled to automatically clean by itself however you only have two options.

(1) You can set it to clean in an hour meaning if you can program it to cleaning a room an hour.

No you can’t input specific times or have program it to clean on different times each day.

It’ll take around 120 minutes to recharge though some reviews mentioned it took less time.

Removing the dust bin is easy, just pop the cover then remove dirt bin (yes it has a handle!), take off the filter then empty it. The filter included is washable.

In normal mode expect around 100 minutes of run time, in turbo mode that’ll go down to around 70 minutes.

It comes with a 1 year warranty on parts and labor.

On bare floors like hard wood or tile, it’ll do a pretty good job because suction is pretty strong and it has a rubber agitator that helps “pull” up dirt, dust and debris up.

It won’t be as effective on carpet as it is on hardwood floors so don’t expect any deep cleaning action here.

Got dark rugs? Don’t worry it doesn’t have the flaw of an Infinuvo where it simply won’t go over a dark rug because it thinks it’s a cliff.

It transitions without much problem whatsoever for rugs under half an inch thick.

Since it has a rubber beater pet as well as human hair will be picked up. Short pet hair won’t get tangled on the agitator but longer human hair can be tangled up so be sure to get your scissors and brush ready to clean.

Hair also gets stuck on wheels so it’s another thing to watch out for.

How to setup cleaning reservations

A little over 30 people left a review in Amazon and a lot of them were positive. Consumers liked it because it cleaned well and wasn’t too noisy (core77 compared it to a hair dryer).

The mop feature received mixed reviews while some customers liked the microfiber mop others say it was pretty useless.

Navigation was a mixed bag as well, there were folks who were satisfied others weren’t saying they had to pick it up and bring it back to its charging base.

Getting stuck is another frequent complaint in reviews, usually it gets stuck when there is clutter like cords or wires, it can also get stuck between the legs of a chair so make sure to de-clutter before setting this off.

You can buy this robot from Amazon for around $220 but unfortunately it isn’t brand new anymore.

This product would be great home owners who have most hard floors in their homes, pet owners also would benefit because this robot certainly is capable of pick up pet hair on hard surfaces.

It won’t do as good a job on carpet though.

Spec wise it’ll definitely last longer because it uses a lithium phosphate and a brushless dc motor that’ll based on research last at least twice as long as their older compatriots the NiCad and a standard dc motor.

It still doesn’t have the sophisticated navigation that’s found in a Neato or an iRobot but it isn’t very far off, just don’t expect it to be fully hands off as it’ll either get lost or get stuck somewhere.

It’ll also miss some spots so you may have to run it more than once to get everything.

The functionality of the room indicator is a bit hazy and one consumer said point blank that it didn’t work and it isn’t advisable to buy more.

At just under $300, this is a good deal for folks looking for a cheaper alternative than a Neato or Roomba.