Neato BotVac Connected Review: Is This The Best Performing Robot Yet?

Author: Garrick Dee Updated: September 5, 2020
Tags: Robot Vacuum
I hope you like the recommended products. Just an F.Y.I., there are affiliate links in this post, and if you click any of those links, I’ll earn a commission.

The BotVac Connect is Neato’s first robotic vacuum that has WiFi Connectivity and a smartphone app. This means you’ll have access to this robot even when you’re not physically present at home.

You can say that this is Neato’s answer to the Roomba 980 and their quest to unseat them as the number 1 in this niche in terms of market share. 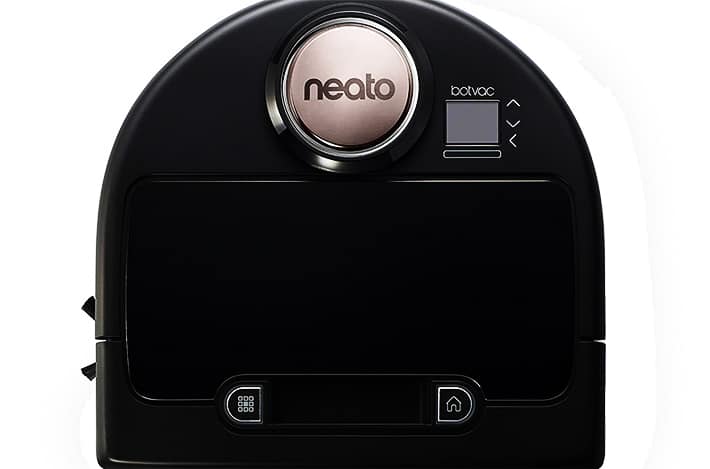 At the time of the 980’s launching, they were one of the few to offer WiFi and a Smartphone app.

Now Neato has gone in the same route with the BotVac Connected. Let the robot vacuum wars commence.

There are two big upgrades here. First would be the WiFi connectivity that allows you to access this robot via a mobile device.

Second upgrade is the Lithium Ion battery that improves the run time and the life span of the battery.

This robot will run longer with more a more linear power band compared to the previous generation Roombas.

According to Ry Crist of CNet, this may be the best robotic vacuum that money can buy not just because of the WiFi connectivity but also because of the performance.

It isn’t cheap though, all the improvements mentioned plus the other features you’ll see in this review isn’t cheap.

At around $700, this machine is one of the most expensive in the market but it is almost $200 cheaper than the Roomba 980.

If you want the same functionality but cannot afford this then you’ll be better of with the older BotVacs like the BotVac 80 or the D80.

What To expect from this WiFi enabled cleaning robot

The robot wars have just begun.

First it was the Dyson 360 Eye, then the Roomba 980 and now the BotVac Connected.

What am I talking about? Well, these three robot vacuums are the first ones in the market with WiFi connectivity.

This simply means that you can download an app then use it to control the robot.

No more separate remote controls. No need to point the remote at the robot to turn it on or activate it.

Whenever there is WiFi connectivity you can basically control the robot from anywhere. At home or at work using an app provided by Neato (yes it works on both Android and IoS devices).

This is how the Neato BotVac app looks like… 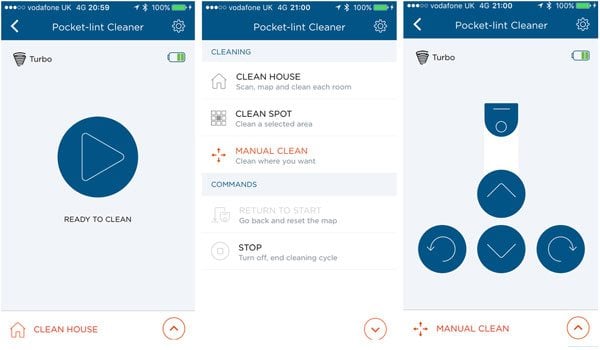 This app is the control center for the robot meaning you can schedule it to clean or manually control it like a Remote Controlled toy using your phone which can be a little tricky to say the least.

You’ll need to download the app from the play store, register your for an account then enter the serial number of your BotVac.

After that you will need to connect the app to the robot and give it its name, if you’re familiar basic functionality of android or IoS applications it shouldn’t take more than 10 minutes to figure out.

Here’s a preview of the connection process (image from CNet)… 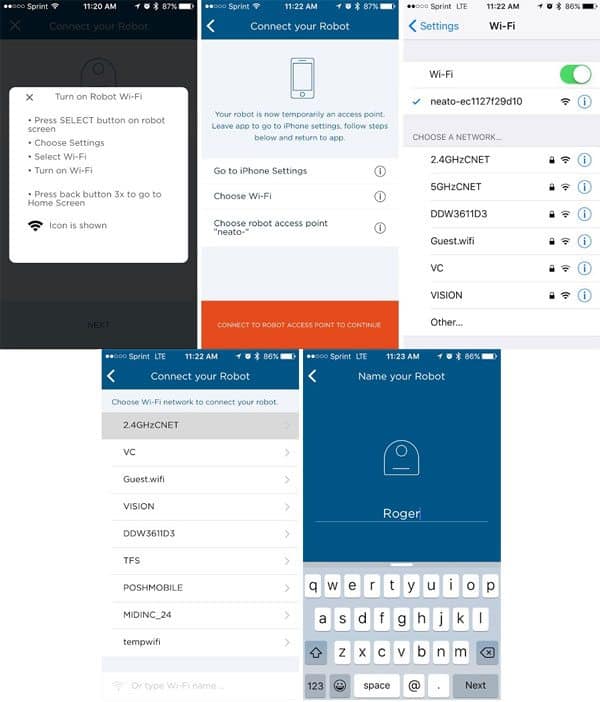 After robot and router connects you’ll see the interface that tells you the battery status and dirt bin status – whether it’s full or not.

In terms of functionality, it’s pretty basic. It will not tell you its exact location in your home or why it stopped working. For the latter you’ll have to check the screen on the robot.

I hope that future versions will come with these features in the app.

Here’s a step by step instruction from Neato…

You can also schedule cleaning times (once a day, seven days a week) and cleaning modes you want.

Speaking of cleaning modes, unlike previous Neato Botvacs that only have one cleaning mode which is the turbo the BotVac Connected also comes in with an Eco mode that has less noise and extends the run time by around 30 minutes.

To see all the features please watch this video by Neato…

This machine uses the same navigational system found inside older BotVac robots which is basically a laser guided system that detects obstacles that the sensor (located on top of the robot) can see.

The advantage of this system over camera based system is that it can “see” even in dark conditions.

So you don’t need to leave the lights at home turned on to use this machine.

Also it has a hard time seeing reflective furniture like mirror or chrome. Consider yourself warned.

Like the previous Neato Robots this machine uses a predicable back and forth grid pattern, something that Roomba eventually adapted with the Roomba 980. 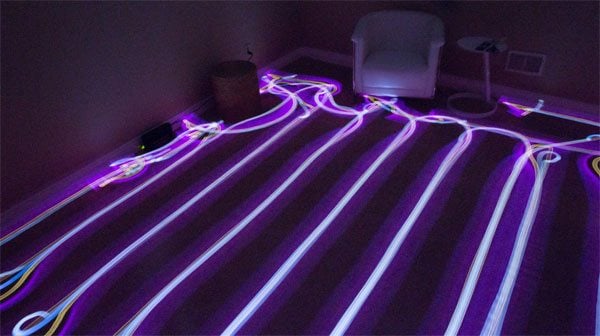 For this I’ll reference CNet’s controlled test. On hardwood surface the BotVac Connected was able to pick up every grain of rice and every piece of hair that was on hardwood (though some of it ended up on the brush roll not inside the bin).

It did struggle a bit in terms of picking up sand on hardwood with the Roomba 880 beating it but it performed better than the more expensive Roomba 980.

Here’s a time lapse video to demonstrate the BotVac’s cleaning performance on hardwood.

Again to reference the same test, it still outperformed most robots in picking up rice and pet hair but it really struggled (as with most robots) in picking up sand on low and medium pile carpet.

The Roomba 880 was the best performer when it comes to picking up sand on carpet.

While this machine performed well in terms of picking up pet hair (particularly on hardwood and low pile carpet), it picked up less than the BotVac D85 and not all of the pet hair ended up inside the bin.

Some wrapped around the motorized brush…

Here’s a time-lapse of that pet hair test. Most cleaners have a pretty easy time with it on hardwood floors. pic.twitter.com/pRPr5tFwkh

Unfortunately, no robot vacuum can do this task (just yet).

Like previous BotVac robots, scheduling feature is available once a day. You can also schedule it to clean at different times during each of the 7 days.

It takes 2 hours to fully charge this robot.

You’ll need to regularly clean the sensors, motorized brush and clean the wheels to keep the BotVac in peak operation condition and here are the videos on how to do it.

Cleaning the sensor (particularly the drop sensors at the bottom).

Cleaning the wheels (although the video shows you how to clean the XV wheels, it should be a similar process for the BotVac).

All Neato Robotics vacuums come with a 1 year warranty on the robot and 6 months for the battery.

Consumers for the most part loved how this vacuum performed, they also liked that it has an app that you can download to a smartphone and use it to schedule this robot.

Connecting the robot and the app has worked seamlessly in the most part (I’ve already shared this earlier in this article) and even if your phone somehow breaks, reconnecting it to another phone isn’t a problem as long as you remember the login details.

However the problem arises when navigating through tight spaces between chair legs. There is a tendency for this robot to wedge itself if it’s too tight.

You will still need your canister or hand vacuum to clean nooks and crannies.

It is also capable of going over thresholds around 5/8” without any issues, the problems is this robot tries to climb up any ramp like structure and this is where it gets into trouble. Also if you have any reflective furniture that has any chrome on it – this robot will have trouble “seeing” it.

In terms of cleaning performance, consumers say that this robot for the most part performed better than the 980 especially in picking up pet hair on carpet. This robot is very good in terms of picking up surface dirt.

The 120 minute run time in “eco mode” is verified by consumers. And they liked how it wasn’t as noisy as it is in “turbo mode”.

The Neato app works well. It shows you the battery status and when to empty the dust bin. You can also schedule the robot to clean autonomously once a day for the whole week at different times. It will notify you if the robot is stuck somewhere.

Compared to the Xiaomi robot vacuum however, the app features are lacking.

Neato has gone a long way with the release of the BotVac connected but they still have their work cut out for them in terms of ironing the kinks out with the app and navigation but in the right setting this robot (flat spaces with minimal clutter) will work great.

You can buy this from Amazon for less than $600 thanks to the release of BotVac D7. And it comes with the 2-day free shipping if you enroll in Prime.

Amazon also sells extended warranty of up to 3 years if you want more peace of mind.

Neato managed to make the BotVac even better thanks to the WiFi connectivity and Lithium Ion battery.

The WiFi connectivitity and app allows you to control this from literally anywhere as long as you have internet connectivity.

And while all the improvements sounds good on paper, it still has some issues with regards to cleaning sand particularly on carpet and navigation (there are still reports of it getting stuck in between legs of chairs and not seeing furniture with a chrome finish well).

While it may not be perfect, the improvements make this a better overall performer than the previous BotVac D-series vacuums. But the real question is – are you willing to spend $700 for that?

If you really want to have the WiFi feature and app then go for it. But if you’re not willing to spend that extra few hundred dollars hen stick with the Neato BotVac D80 or 80. It will give you roughly the same performance for less.