With the XV Pro, Neato allows home owners to have an opportunity owning a robot vacuum that will clean their homes efficiently faster than most robots in the market because of its laser guided navigation. 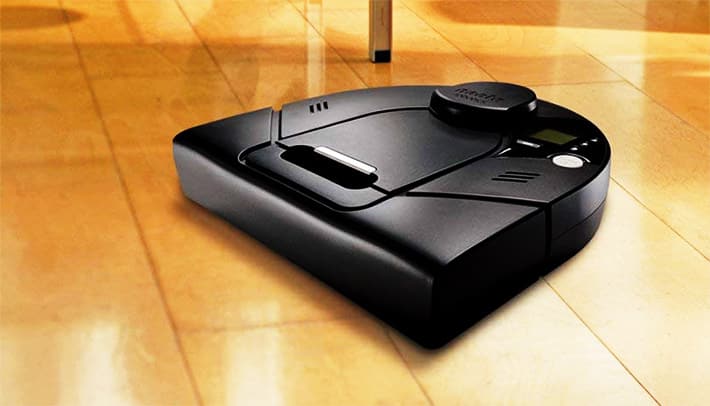 At a price that will that will not break the bank.

The XV Signature Pro is Neato’s latest and their most powerful Robot vacuum to date.

Update: Neato has since updated its product lineup and released new products like the BotVac and newer Botvac D-series. These new models provide better cleaning performance and navigation.

CNet loved it saying that it is one of the smartest robots they’ve tested and the cleaning performance is better compared to the more expensive Roomba 790.

It has HEPA filtration (allergy sufferers this is for you) and it comes with two types of brushes – one for hard floor and another for carpet.

Take note that there’s no remote in the package but you can schedule it so it isn’t a big deal.

Related: What’s the difference between a Neato and an iRobot?

What to expect from the Neato XV Signature Pro?

In the middle of the Signature Pro is an elevated box that houses the navigation system that uses a laser to map out the corners and avoid obstacles.

Unlike the iRobot that bumps into objects the Neato avoids them outright and if it bumps into something it won’t be as hard.

Unlike the iRobot that goes in a random pattern, Neato has a more predictable pattern that starts by mapping out the perimeter, working the edges and then moves inward in a straight back and forth pattern until it finishes the room.

To give you a visual check out this video…

It uses lasers to map out the size of the room and avoids obstacles not bump into them. When battery needs recharging, it’ll return to the charging station and goes back where it left off – a great feature that increases efficiency but unfortunately not all manufacturers have.

Also firmware upgrades are available through a USB port.

Consumers have reported better corner and edge cleaning with the 3.2 firmware upgrade.  It might take some time to clean an entire room compared to an iRobot.

As with all robot vacuums, leave AT LEAST 3-feet of open space around the charging station to avoid issues with docking.

You can schedule this robot to clean your home autonomously once a day up to 7 times a week. Rescheduling is also available just in case there is a need to.

Neato doesn’t specify how long it needs to be charge.

Some consumers say that you’ll need to charge this overnight. But typically with robots it’s best to keep it plugged in.

Because it traps fine allergens, HEPA filters need to be replaced once every 2-3 months.

The filters in the Signature Series Pro can be washed in running water, some use compressed air or a hand vac to clean. I’d discourage using compressed air because damages the make-up of the filter that traps allergens.

After every cleaning cycle, empty dirt bin so it doesn’t bog down. It does let you know if it needs to be emptied.

No official number s from Neato but consumers has given some feedback on this. Some ran as little as 20 minutes and the longest would be around 2 hours on a single charge.

While there was a complaint about not refunding after a 30-day window (for Amazon buyers), consumers were on the most part happy with the after sales service, Neato will send you a replacement robot if it is found to be a defective unit, just make sure to keep all the documents in place.

All Neato Robots primarily use suction that’s augmented by a motorized brush to pick up dust, dander, pet hair and even cereal off bare floor.

While it doesn’t have any corner brush like the iRobot that makes edge cleaning a little suspect but its shape makes it better suited to reach corners better though dirt pick up here is lacking as well.

Here’s a demo on hard wood…

Some owners mentioned that it picked a greater deal of dirt compared to a Roomba 560 (granted it was an older model).

With its good suction power and beater bar will work great on low to medium pile carpet but will have difficulty on thick carpets.

A lot of people were satisfied with its performance on this surface because of the combination of good suction power and the motorized brush.

It doesn’t have a problem transitioning from hard floor to rugs but it might not pick up dirt on the corners of rugs, especially thick ones.

Does well in cleaning pet hair both on hard floor and carpet because it has a motorized brush but remember to regularly clean it when there is build up in order to maintain performance over the long haul.

How it cleans the edges and corners…

A quick look at the features…

This product was just released early this year so there aren’t a lot of reviews available and currently there are over 40 reviews. Most were happy with their purchased and interestingly enough a lot of those buyers also owned an iRobot (though an older model), and they preferred this over the former because it had good suction power and it ran a more predictable pattern plus it doesn’t bump into furniture as much.

There were only a few pet owners who reviewed this product but all were happy with how this removed pet hair on hard floor and carpet.

Complaints here mostly focused on two things – short battery life and the tendency of it to get stuck.

The first issue was mostly due to lemon units from the manufacturer so again as I’ve said in my reviews before, upon receiving it always put it to its paces – you have a 30-day window wherein you can send this unit back for a refund.

Second issue was because of the position of the laser with sits roughly around 3-4 inches above the ground, it cannot see what’s on top or what’s below it so if there is something in front of the robot that’s under 3 inches, it won’t “see” it and either will move around or get stuck trying to move around.

Overhanging fabric could also cause issues so it’ll be better to fold them up out of the way.

You can buy this from Amazon but it won’t be brand new. It will cost you more than $600 since you won’t be buying direct from Amazon.

A better option in my opinion would be buying any of the Neato BotVac series robots that have the latest navigation and battery technology that will clean and run longer.

For busy home owners who would like some help and have some extra cash to spend for this type of technology, this would be a great alternative to the more expensive iRobot 790 because it is a few hundred dollars cheaper and it has better suction.

It doesn’t have a remove or side brush but since you can do it direct on the robot itself, this shouldn’t be a big deal.

The absence of the side brush hurts its performance on edges and corners though and because it has more powerful suction – run time suffers, expect around an hour of run time or less on a single charge.