This Shark cordless reminds me of the late 90s no-nonsense design of the popular Black and Decker dustbusters, it does look just a little bit more modern with its black and grey two-tone finish. 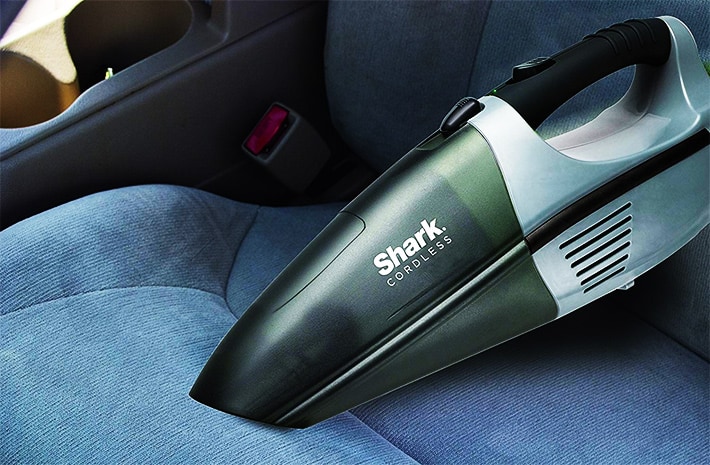 Unfortunately the performance also resembles that of a 90s cordless vacuum based on some reviews I’ve read.

But others where quite happy with the performance saying that it has good suction and run time was sufficient.

I checked the website of Shark and they no longer carry this model.

The good news is it is really cheap at just under $34 which is great because it doesn’t lighten your wallet.

So if you’re really looking for something to do quick clean ups that’s also affordable check out the rest of this review.

What to expect from the Shark 12 Volt Cordless?

Though it looks bare, it does the basic attachments you need for this type of vacuum.

It comes with a crevice and a brush tool that helps in pick up dirt along the edges and pet hair on upholstery.

It is only rated at 12 volts so don’t expect too much in terms of power.

It comes with a crevice and a dusting brush but it doesn’t have an extra filter.

It’ll take roughly 14 to 16 hours to recharge based on a couple of customers who left a review. Shark doesn’t have this product listed in their website so those numbers aren’t official.

Cleaning the filter is pretty straightforward, just push a button to release the dustcup then pull out the filter and then empty the dustcup over a garbage bin.

Cleaning up the filter might be a little bit messy as you’ll need to use your fingers to remove dirt that sticks on the filter.

Again there are no official figures since this is a discontinued product.

If you look at reviews, it ranges between 5 and 30 minutes.

Since this vacuum use a NiCad battery, the life span of the battery will be suspect and won’t last as long as a Li-Ion battery.

One big disadvantage that a NiCad battery has is power fade that can happen as early as the 3 minute mark if you look at the reviews.

It comes with a 1 year warranty.

This product more suitable for hard floor surfaces than carpet. The crevice tool works great if you want to reach the edges.

And the dust tool works great for removing dust or pet hair from upholstery (according to some reviews).

Not really good on carpet because suction is a little bit lacking here.

It might work on picking up loose dirt above shallow carpet.

But if dirt is embedded under shaggy or even medium pile carpet, forget about using this since it doesn’t have enough power.

Some consumers mentioned that it worked great at picking up pet hair on hard surfaces and one even commented he/she was able to remove pet hair using the dusting brush tool on upholstery.

It has a wide nozzle so pet hair will not clog it too much.

If you have a lot of pets though, I wouldn’t recommend this because of its relative short run time plus it does not have any pet hair tool whatsoever that’ll make this easier.

It could work on hard floor or on leather upholstery.

Unfortunately I can’t find any decent videos showing this in action.

Surprisingly it had an above average review in Amazon though it only got a little over 20 reviews. I say surprising because I didn’t expect this lightweight to pack this much of a punch.

The negative feedback focused on the quickly degrading suction after the 2 or 3 minute mark.

They did complain though about the long charging time which is between 14 to 16 hours.

Close to 20 people left a review and most of them where positive. Owners here were a mix of pet owners and parents looking for a handheld that’s cheap that’ll do the job.

Pet owners were happy because the wide nozzle was big enough to pick up hair and other litter that their pets leave behind.

Parents were happy because it helped them keep up with the messes that their little toddlers make that include spilled cheerios and other messes.

There were also consumers who claimed that this was the best handheld vacuum but I wouldn’t go that far though because this does have its limitations.

Bed Bath and Beyond

Like in Amazon, it received just a little over 24 reviews and the positive and negative points were similar.

One review put it accurately. He said that it has enough suction to pick up loose dirt. However it will struggle to clean something embedded on carpet or upholstery.

The consensus here is that it works better on hard floors than on carpet.

Complaints here focused on the lack of run time, several complained that it died on them after a few minutes with at least two saying it didn’t last the whole warranty period so there are also issues with quality control at least according to BBB customers.

In Amazon only the SV66 is available for just under $35. The SV7728 is not currently available but both of these variants basically have the same features.

This bare bones handheld vacuum is great for price conscious owners of small homes, cars or even RV owners looking for a lightweight product that doesn’t need a lot of storage space while still providing decent suction to clean up small messes here and there without having to spend over $50.

Parents can also benefit from this if they’re looking for an affordable handheld to help them clean up spills here and there that their children make.

Pet owners should look elsewhere since this 12 volt handheld doesn’t have enough suction to keep up with their shedding pets.

Don’t expect a lot though as it doesn’t have a powerful motor and it only has a 12 volt battery that takes more than half a day to recharge.

Also make sure that you unplug it after the LED charging indicator says that battery is full, this will extend battery life.