For me upholstery and stair cleaning, have to be two of the toughest tasks if you lack the right tools.

With the Shark Perfect II hand vacuum, you don’t need to worry about those two tasks anymore nor do you have to spend over a hundred bucks. 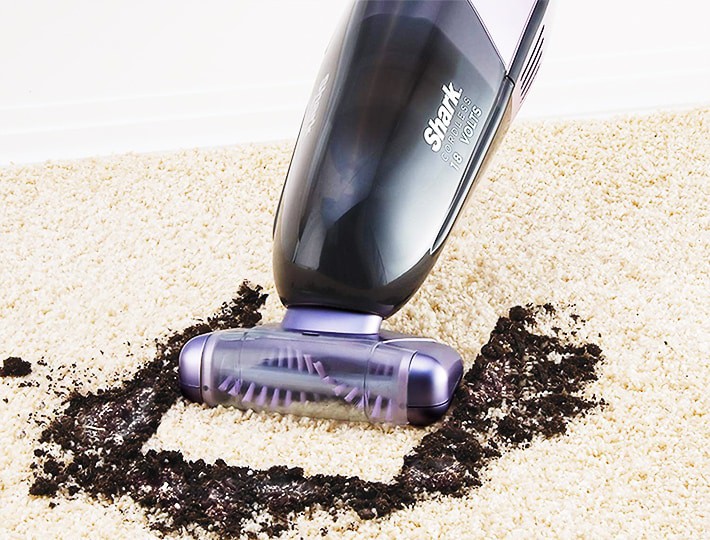 It is one of the few handheld vacuums equipped with a motorized brush which in essence makes this an effective tool to clean pet hair off stairs, upholstery, hard floors and a variety of carpeted surfaces.

It also comes with two other attachments – a crevice and brush tool to reach crevices and pick up dust off hard surfaces = more versatility.

Good housekeeping gave it a B-rating saying that it was great in removing pet hair and dirt on bare floors but had a short peak power.

It also scored high in Consumer Reports testing where they mentioned that it “inhales” pet hair.

Because it uses a NiCad battery it isn’t the lightest handheld around at nearly 5 pounds but this is somewhat negated because of its power and according to several reviews it has pretty good suction power for a handheld and is great to use on upholstery, carpeted stairs.

What to expect from the Shark Pet Perfect II?

It uses cyclonic action similar to a Dyson to keep dirt away from the filter opening to maintain performance as the dirt cup fills up.

Run time though is a bit lacking so don’t expect more than 15 minutes.

Here are the other features.

All in all there are 3 attachments – a motorized brush roll, crevice and brush tool. The charging station does come with a storage case for these three tools.

Initial charging time would be 24 hours and then 16 hours on subsequent charges.

Shark recommends to unplug the charger after the 16 hour charge cycle and to draining the battery to extend its service life.

There are no videos available online to show you how but emptying is simple, it would involve

You may need to buy extra filters to avoid downtime waiting for the filter to dry up.

Shark does not say how long this product will run by expect it to last for about 15 minutes but that’s minus the brush roll tool. With the motorized brush that number will drop to about 10 minutes.

There isn’t any feedback with regards to customer service. Shark gives consumers a 1 year limited warranty against defects.

Good housekeeping gave it a B-rating in their review and one of the reasons is it excels in cleaning bare floors, the motorized brush combined with the suction power is a good combo to pick up dust and pet hair though it may struggle with larger debris as it has a tendency to spit those out.

A workaround would be using the crevice or brush tool or not use any attachments at all, since the suction will be strong enough.

You can also use the crevice to clean baseboards and the brush tool to remove dust off tables.

The motorized brush will only work on fine debris on carpet. It will struggle on larger debris because this tool is compact and the opening isn’t big. To clean up larger chunks of dirt, the brush tool is a better option.

If you have carpeted stairs, this will work great because of… again the motorized brush.

A lot of pet owners left reviews for this product and they loved how effective it was in picking up pet hair off carpet and upholstery.

The downside of the brush roll is it doesn’t swivel or rotate so it can be a little hard on the wrist.

A review from vacuum wizard…

Over a hundred people left a review in Amazon and more than seventy were satisfied with the performance saying it had good power and worked great on removing pet hair.

A lot of pet owners in fact purchased this and like how it cleaned pet hair off upholstery and carpet but there were some complaints about how hard it is to clean the brush roll.

Run time though was somewhat lacking though as some people complained that if they used the beater brush, it drains pretty quickly.

There are also complaints about the tools falling off because it does not have any locking mechanism. This is

Despite the number of negative reviews, it was mostly positive most of which stated that suction power is good though run time isn’t very long.

13 people left a review at sharclean.com and all of them were positive! Most of them liked the suction power and the brush roll tool that helped them clean pet hair.

Folks who used this inside their vehicles were also happy with the results.

The reviews here though are somewhat lacking in detail so take it with a grain of salt.

You can buy this in Amazon for less than $60 and it’ll be eligible to their free 2-day shipping if you join Prime.

This handheld would be great for pet owners looking for a product that would help them clean pet hair off upholstery and stairs.

This however isn’t meant to be used as stick vacuum replacement because it lacks the reach and has a very short run time, so it’s only meant for spot clean-ups.

The motorized brush attachment is a great feature but it doesn’t have a locking mechanism and can’t swivel like a Dyson V6. So this takes away from its usability somewhat but heck it only costs almost 10x less so got to take the good with the bad. But the Shark isn’t as expensive so this is a great bargain.

Other attachments also don’t have a locking mechanism so make sure to attach it securely before using this or it will fall off.

The nickel cadmium battery is a concern because of the long charge time and short run time. It will also have a shorter lifespan compared to a lithium ion but it is removable so it shouldn’t be a concern.