Author: Garrick Dee Updated: April 21, 2022
Tags: Robot Vacuum
I hope you like the recommended products. Just an F.Y.I., there are affiliate links in this post, and if you click any of those links, I’ll earn a commission. 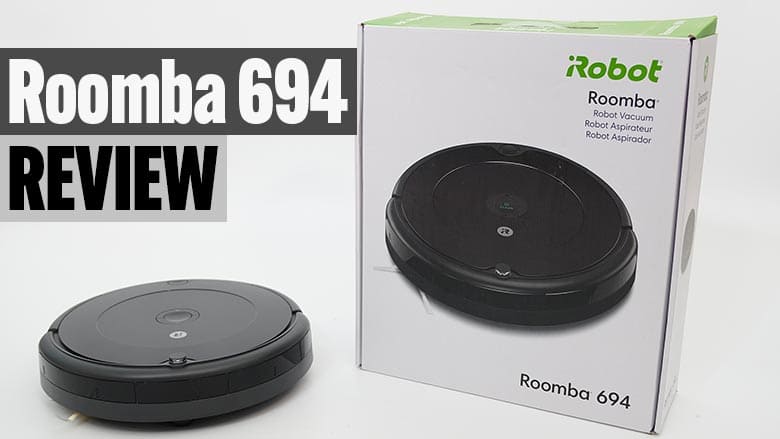 The Roomba 694 is one of iRobot’s latest releases and is currently the face of their entry-level variants.

It has racked up over 70,000 reviews and counting, which is a huge reason why I purchased it for testing.

How good is this robot? I’ve put it through a grueling series of tests to find out.

Consumers shouldn’t expect much from the Romba 694. It’s iRobot’s cheapest option with the most basic features. This variant doesn’t have the smart navigating capabilities of higher-end Roombas like the J7, I6, and S9. It even doesn’t have the gyroscope sensors of the I3, so it only pinballs around randomly. Nonetheless, the 694 is one of the most popular options in Amazon due to its workhorse-like qualities and parts availability.

*If you click this link and purchase, we earn a commission at no additional cost to you.

Introduction to the Roomba 694

iRobot frequently updates its product line with releases, which is the case for the Roomba 694.

But most of their updates are cosmetic, and this variant is an excellent example of it.

The Roomba 694 is a refreshed version of the 675 with the same motor, battery, and brush layout.

However, there are subtle variances.

I noticed the lack of a handle on the 694 fascia that helps consumers move this robot around different areas in their homes.

Another variance is cosmetic. This robot comes in a dark gray/charcoal finish with a slightly different button layout. 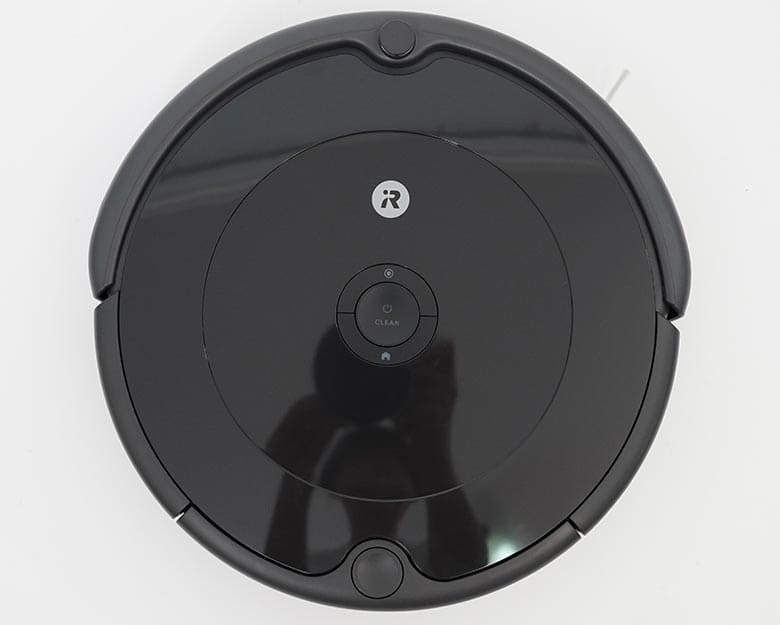 iRobot refreshed the top interface with the same button layout as the Roomba 675 [check photo below]. 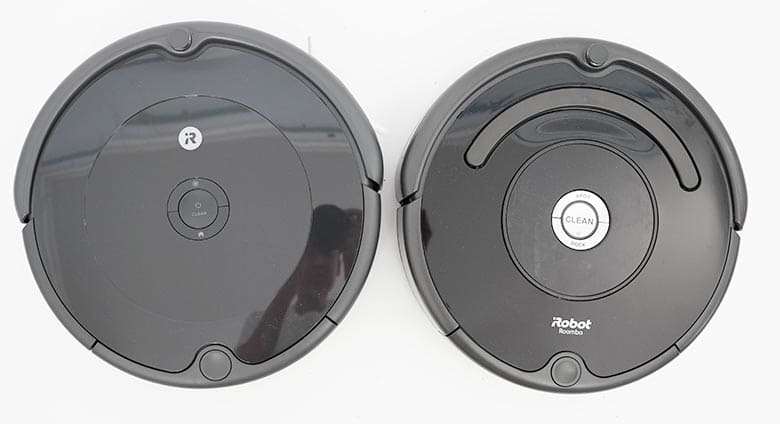 Why iRobot ditched this feature, I don’t know. It could be for it to be more aesthetically pleasing, but whatever the reason, I didn’t think it was a good idea.

The handle helps consumers move this robot around in different areas since it wasn’t an intelligent robot vacuum.

Otherwise, the base elements remain the same. 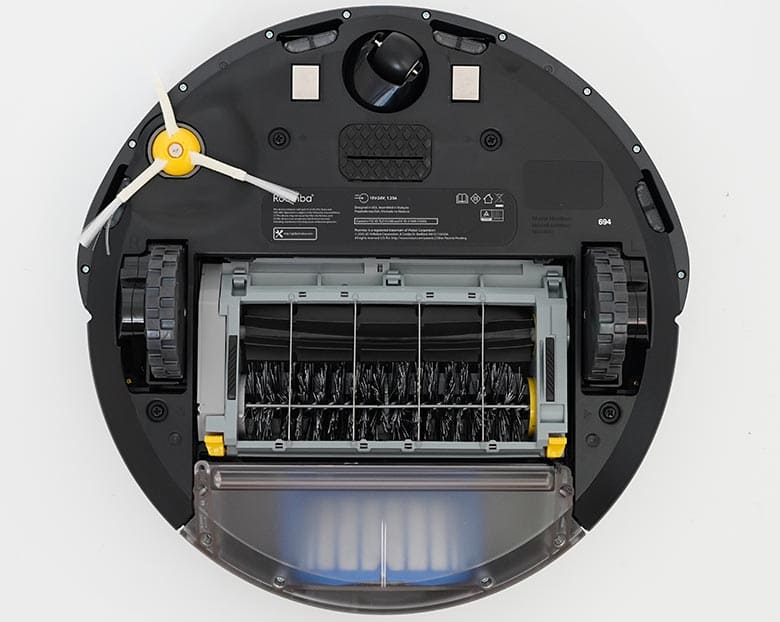 Underneath, the Roomba 694 retains the same layout as the other 600-series variants.

Put an older 600-series variant side by side with the 694. You can’t tell the difference. 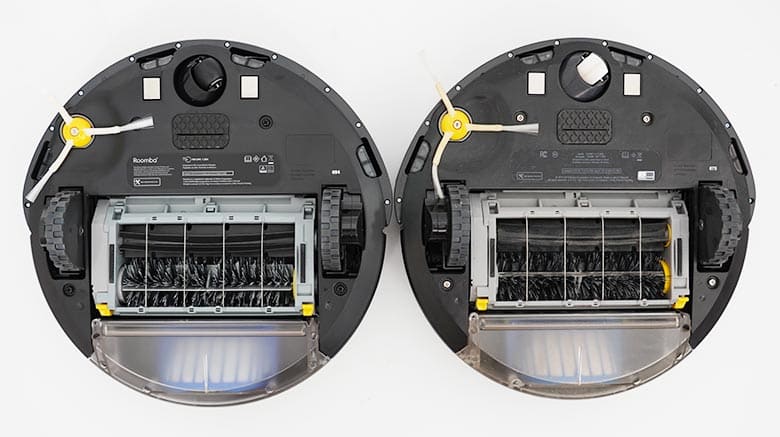 The only difference is the caster wheel color, which doesn’t affect its cleaning performance.

All 600-series robots use the same blade and bristled counter-rotating brushes. An iRobot patented technology, so it’s not found in other brands. 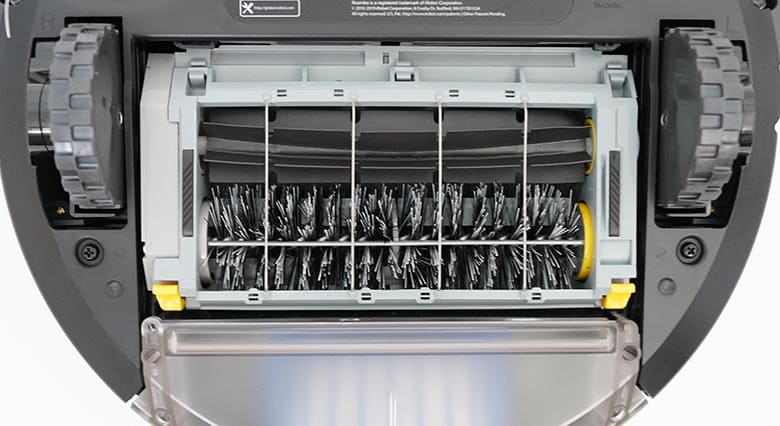 These brushes excel at debris pick up, making the 694 one of the better performing robot vacuums on carpets. 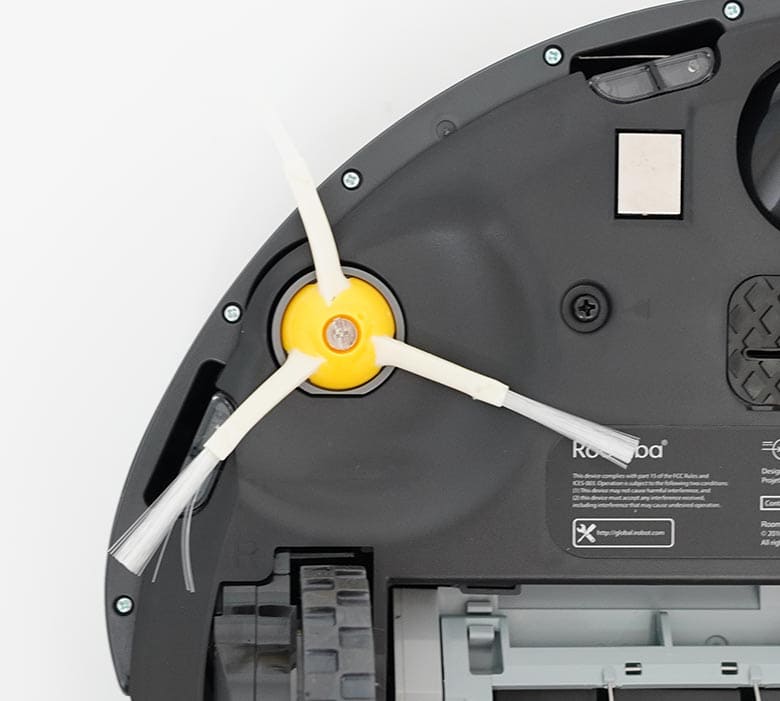 Like most Roomba products, the 694 has a single side brush, helping it gather debris from the corners and funnel it towards the counter-rotating brushes.

One issue with this is it spins too fast, scattering debris.

It was an issue during the cleaning experiments and why the 694 got only decent scores.

The side brush scattered stuff like pet litter and quinoa to a larger expanse, but this issue was a non-factor cleaning dust. 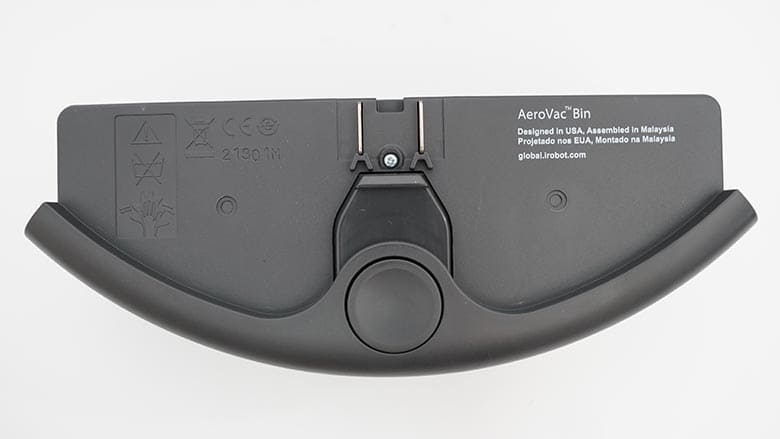 The Roomba 694 has a rear-mounted dustbin with a 600-ml volume. It’s the same design as the older Roomba 675 [both are interchangeable].

One plus with the Roomba 694 dustbin is its wide opening, making it easy to dispose of debris.

Unfortunately, it uses a lower grade filter with less paper material than newer Roomba models like the E5 or I3.

So it won’t filter like those variants that use a chunkier filter.

This robot also doesn’t have a self-emptying feature, and consumers will have to empty it manually.

The Roomba 694 is compatible with the iRobot home app but with only basic features.

This app doesn’t have the fancy features of premium Roomba products like the S9 and J7.

So don’t expect too much. 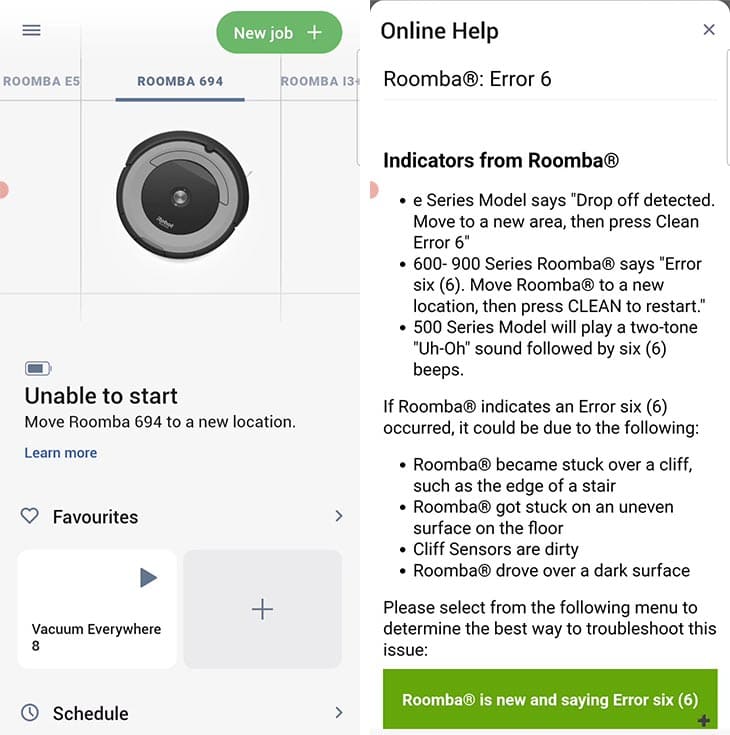 Perhaps the most useful for these features for me is decoding the various error codes you’ll likely encounter during this robot’s lifespan.

Not only will it tell you what’s wrong, but it also provides a step-by-step guide in fixing the issue.

The Roomba 694 app has a scheduling feature, but it’s limited to creating a once-per-day schedule, which is its biggest drawback.

Other budget robot vacuum brands like the Roborock E4 support multi-run scheduling, so iRobot has to improve upon this restriction.

However, the iRobot app has a Genius feature that automates the cleaning process for you.

For example, you could enable the location services, so the robot will vacuum (automatically) once it detects you’re leaving home.

It’s a feature that I believe iRobot has rolled out across its product line. 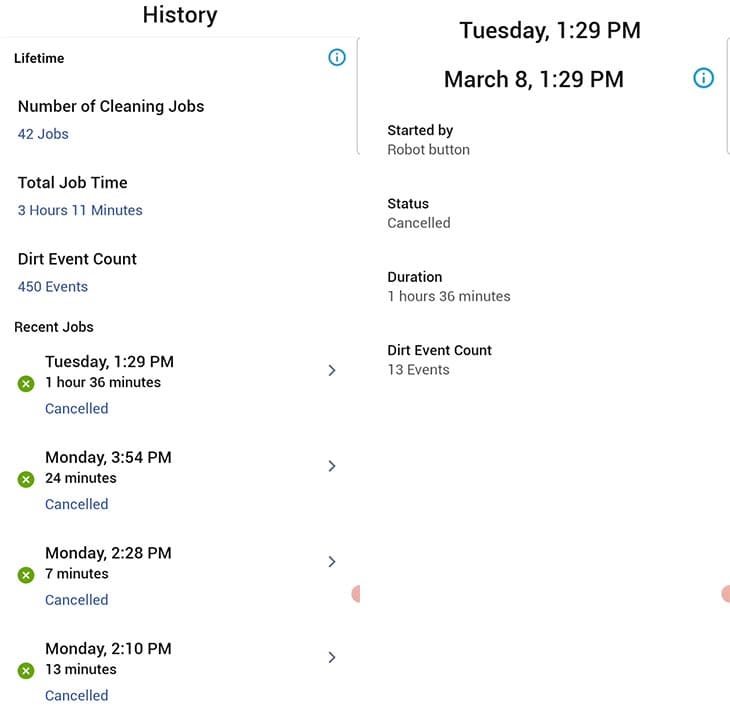 The history tab is like the robot’s odometer, informing users how many times they’ve used the robot plus other details like duration, etc.

Since this product doesn’t have VSLAM, no maps are saved, just numbers and information.

How does the Roomba 694 navigate?

There’s nothing special with the Roomba 694 navigation. It uses various sensors around and underneath to detect and avoid obstacles and cliff points.

It traverses in randomly, like a pinball bouncing around inside the room.

iRobot calls this adaptive navigation, but it’s smart enough to clean (at least) most of the areas.

However, it’s not efficient, which is its biggest limitation.

Consumers cannot rely on this robot to clean multiple rooms without getting lost or not docking.

That’s why I think removing the handle was a big mistake since it helps consumers move this around.

I put each robot I review through a coverage test in my small home office. It’s a good metric in testing a robot’s efficiency and how much debris it picks up.

Smart robot vacuums ace this test, while inefficient ones leave remnants after the run.

Here’s a before photo for the Roomba 694 coverage test. 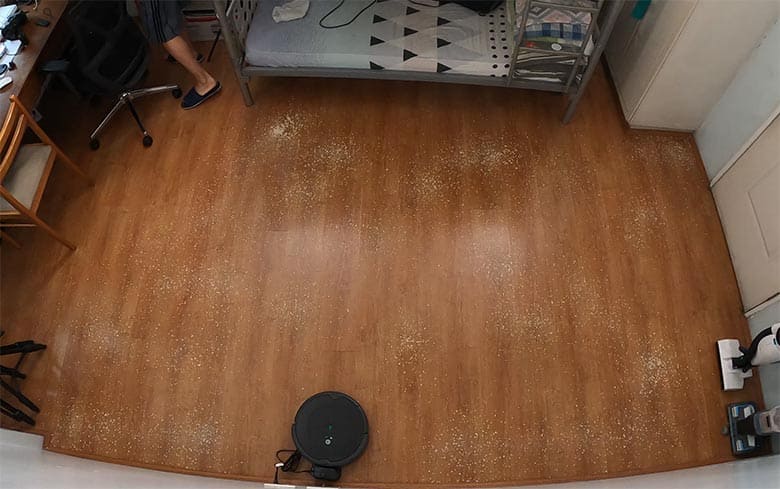 And the after shot. 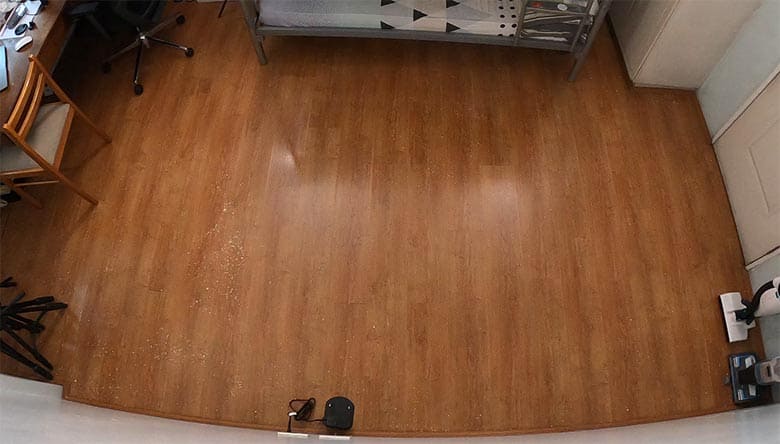 It’s an impressive result for a random navigating robot, but it left chunks of quaker oats after the first run. 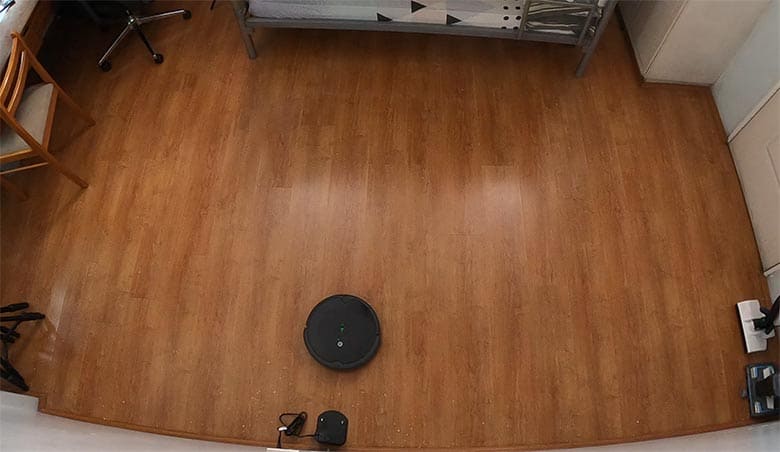 I did a second run, and it picked up most of what was left, but I needed to vacuum debris afterward.

Overall, it’s a decent result and proof that the adaptive navigation works, but on a per room basis.

How much power does the Roomba 694 have?

Next, we’ll look at its power, and I used an anemometer to measure airflow at the brush roll.

Robot vacuum brands don’t have a universal metric for power, so this is an excellent barometer to predict its performance.

Models with high airflow (like the and 980) tend to pick up better than options with lower airflow.

Other factors like agitation also play a role in robot vacuum performance, but airflow is a good indicator.

These results prove what I said in the video review that the 675 and 694 use the same motor.

But fortunately for potential Roomba owners, the 694 has excellent agitation and did better than expected in the cleaning tests.

Here are the results.

Not high-end results, but these are decent for a low airflow robot vacuum.

It was better at cleaning carpet, and the 80% score in deep cleaning tests is in the upper percentile of robot vacuums. 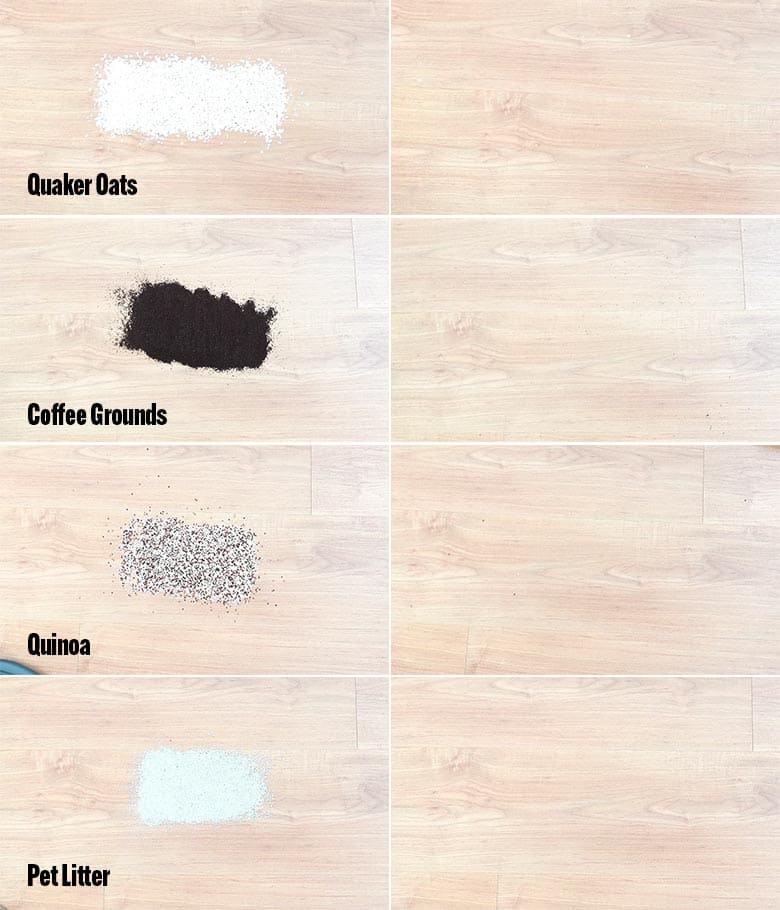 The Roomba 694 was decent on hard floors, picking up in the mid to high 90s.

But it lags higher-airflow robots like the Roomba J7 and S9 because of three things: low airflow, random navigation, and fast-spinning side brush.

I’ve already mentioned the side brush issue earlier, but it’s something to think about for pet owners who use pet litter in their homes.

The Roomba 694 side brush may scatter it.

Despite the low airflow, the Roomba 694 was decent at picking up sand with a 96.8% score.

It was not excellent, but the random navigating pattern and fast-spinning side brush prevented it from picking up more.

Nonetheless, it’s a decent budget option for cleaning sand for folks living near the beach or sandy area.

Next, we’ll look at how the Roomba 694 resists hair tangles on five and seven-inch hair.

Here’s the result after the five-inch experiment.

And the result after the seven-inch test. 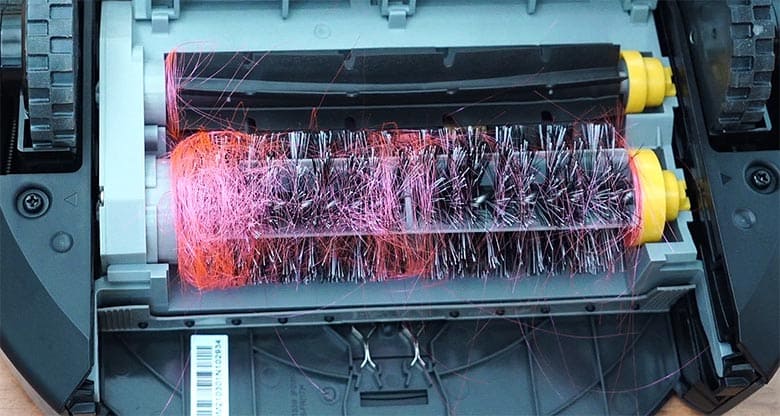 Most of the hair wrapped on the bristled part after the five-inch test and more with the seven-inch experiment.

Overall, the Roomba 694 only picked up 51% with five-inch strands and 32% with longer seven-inch hair.

It’s not something I’d recommend for cleaning pet hair since you’ll spend lots of time cleaning the brush.

Another struggle with round-framed robots is their inability to clean edges efficiently.

The Roomba 694 didn’t do very well cleaning this area and left a good chunk of debris afterward.

Despite the low-end airflow, the Roomba 694 was decent on carpet, even with embedded sand.

I experimented with various debris on low and mid pile carpet to see how much it picks up. 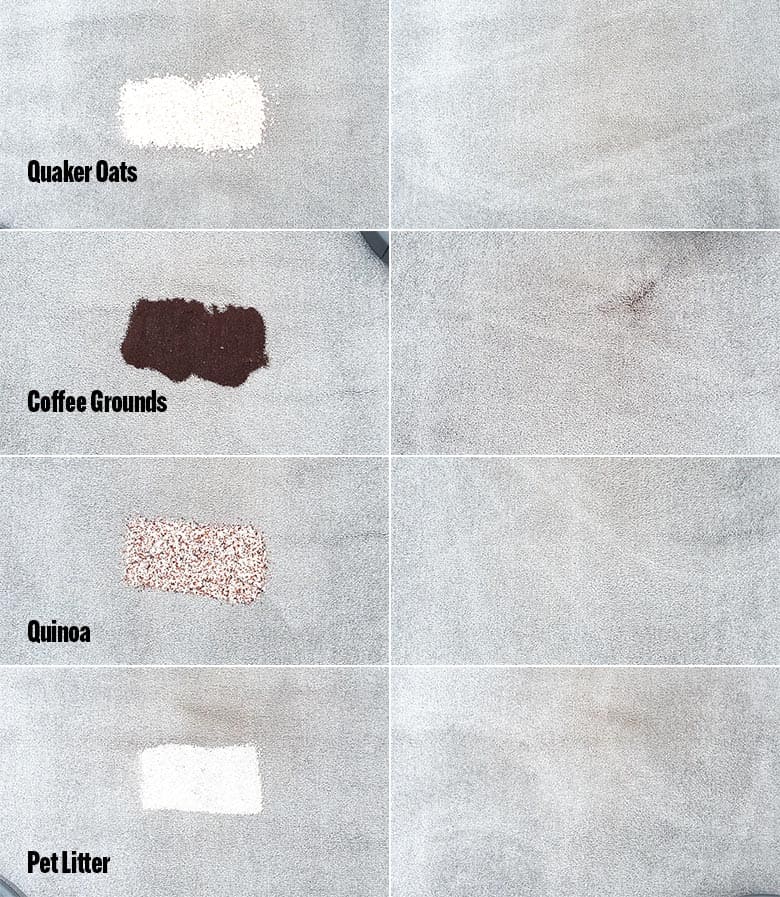 The Roomba 694 struggled most with coffee grounds, an Achilles heel for nearly all low airflow robots I’ve tested.

But it did well with other debris, picking up in the high 90s. 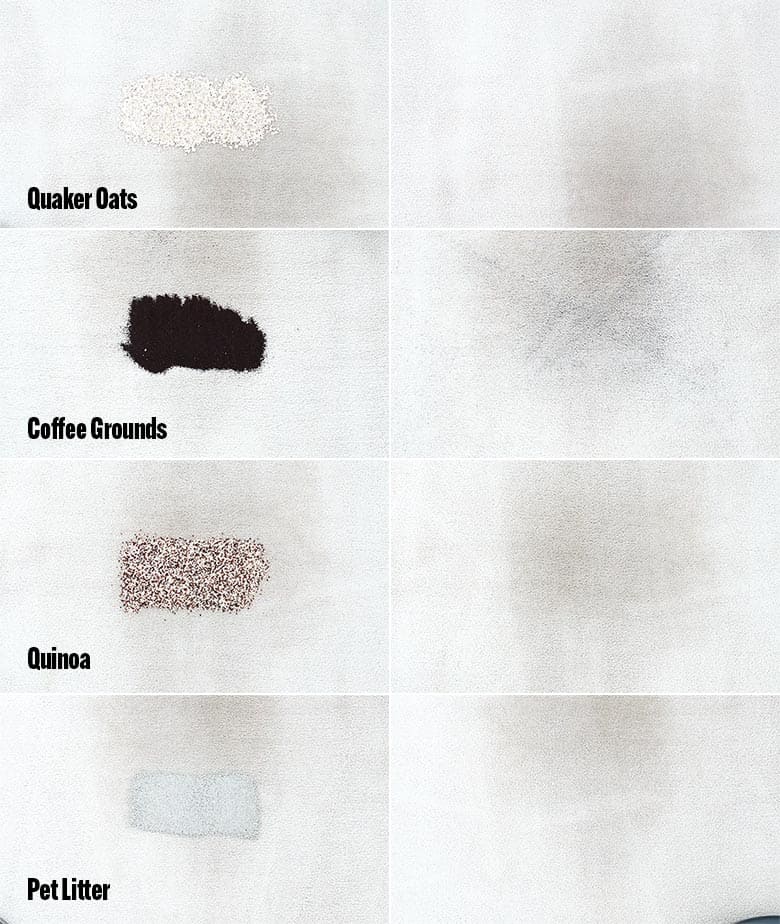 It’s the same on mid-pile carpet – struggled most on coffee grounds but above-average with other debris types.

The side brush scattering issue wasn’t as prevalent on carpet since there’s more friction.

Roomba products are popular because of their outstanding deep cleaning, even lower-end variants like the 694.

The counter-rotating brushes provide double agitation, picking up a good chunk of embedded sand (80.2% average in two tests), and also passed the eye test as there wasn’t too much sand residue on the surface.

Noise level is another potential deciding factor for consumers shopping for a robot vacuum.

I used a sound meter to check noise levels near the robot, and the Roomba 694 produced 65.6 decibels.

It’s not terribly noisy, but you could feel its presence with the aggressive navigation bumping into furniture.

This entry-level robot is available in online stores like Amazon. Check the link below for the latest pricing information.

Disclaimer: I will earn a commission if you purchase from the link above, but at no extra cost to you, so it’s a win-win for us!

The barebones features of the Roomba 694 pale in comparison with other brands that offer smart navigating robots at similar price levels.

However, the point of purchasing a Roomba is its workhorse-like quality.

These machines will last for a long time if properly maintained, and there is a bevy of parts available (OEM and aftermarket).

4 Reasons to Purchase the Roomba 694

The Verdict: Workhorse Robot Vacuum for Homes with Carpet

While the Roomba 694 won’t wow you with its features, it makes up for it by being durable and having numerous replacement parts options.

Compared to other brands, the features it offers are basic.

However, it still continues to be a popular option (over 70,000 reviews and counting!) because of its carpet cleaning performance and workhorse-like qualities.

If you don’t mind its limitations and flaws, it’s a good option for folks looking for a cheap robot vacuum to clean their carpeted homes.

The Roomba 694 is a basic workhorse-like robot vacuum that does the job. But don’t expect any fancy features from this entry-level option. Its random navigation is thorough but inefficient, so I can’t recommend it for cleaning multiple rooms as the risk of it not going back to recharge skyrockets in that setup. One benefit of purchasing an iRobot product is the sheer availability of parts, both OEM and aftermarket, which bodes well for long-term ownership. If that’s a deal-breaker for you, then strongly consider this entry-level Roomba product.