Author: Garrick Dee Updated: May 24, 2022
Tags: Auto-Empty Robot Vacuums, Robot mop, Robot Vacuum
I hope you like the recommended products. Just an F.Y.I., there are affiliate links in this post, and if you click any of those links, I’ll earn a commission. 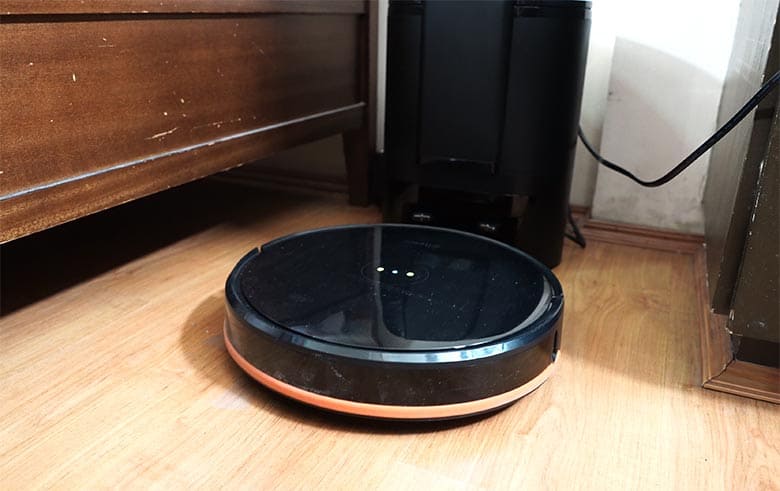 Most decent performing self-emptying robot vacuums cost in the low three-figures to the low four-figure range.

The introduction of non-Roomba brands has shaken the market and brought prices down (great news for consumers!).

However, consumers should prepare to deal with some compromises, and the Ultenic D7 is no exception.

I’ve put this robot through my usual series of tests to see what those compromises are and if it’s worth considering.

One of the Cheapest Auto-Empty Robot Vacuums Available

As I’ve said in the intro, the Ultenic D7 is one of the least expensive self-emptying robot vacuums available. It’s got smart navigation, but it lacks map saving. Don’t expect this variant to have advanced navigational features like in-app containment, selective room cleaning, etc. The D7 relies on a gyroscope for navigation, unlike the T10, which used LIDAR, which is why it’s cheaper.

*If you click this link and purchase, we earn a commission at no additional cost to you.

The Ultenic D7 is one of the cheapest self-emptying robot vacuums available. This variant is Ultenic’s second auto-empty robot vacuum after the T10.

But the former is a few hundred dollars costlier with its more refined LIDAR navigation.

The D7’s navigation is simpler. It uses a gyroscope like the Roomba I3 and Roborock D4, so it’s cheaper.

However, not having SLAM (or VSLAM) limits its navigational features.

Yes, it can move in straight lines, but the D7 can’t save maps. Thus, it lacks advanced features like containment and selective room cleaning. 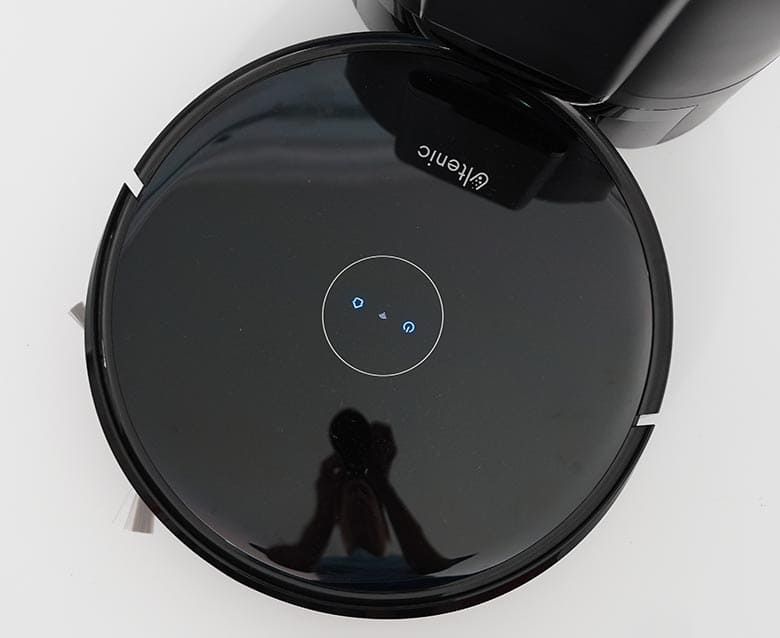 The D7 has a minimalist interface with three buttons on top. These aren’t traditional push-button switches.

It has a touch screen feel and is probably too sensitive because it automatically resets the WIFI connection if you flip it over flat (let’s say to clean the brushes).

One workaround is laying it on a book, so the top sits at an angle and not flat on the ground.

The D7 comes with a remote, but consumers can connect it to Ultenic’s smartphone app to unlock all the features.

Important note: The app says to connect it to the Ultenic-XXXX WIFI, but choose the SmartLife-72B4 instead to pair the robot and app. 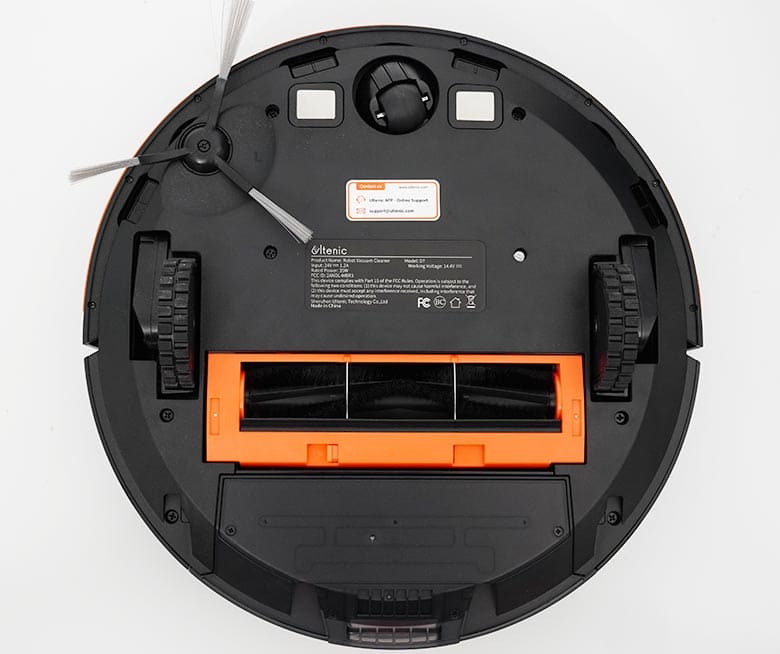 Underneath, the D7 utilizes the standard robot vacuum configuration – one side brush and a primary (combo) brush.

Its combo brush is similar to the Roborock S5 Max and S6 MaxV but with (slightly) softer bristles. 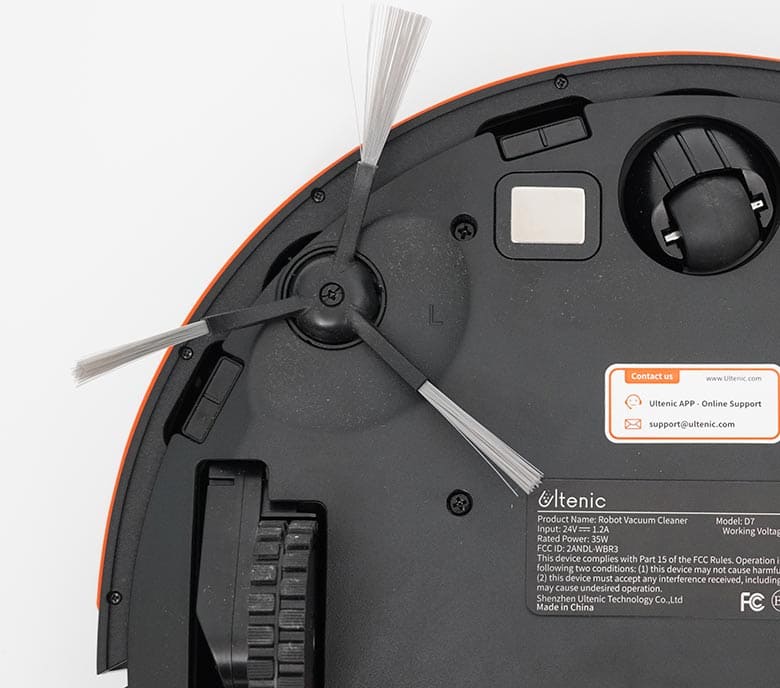 This robot uses a bristled-tip side brush, which is standard for most robot vacuums.

It helps the robot grab debris along the edges and funnels them towards the main brush. 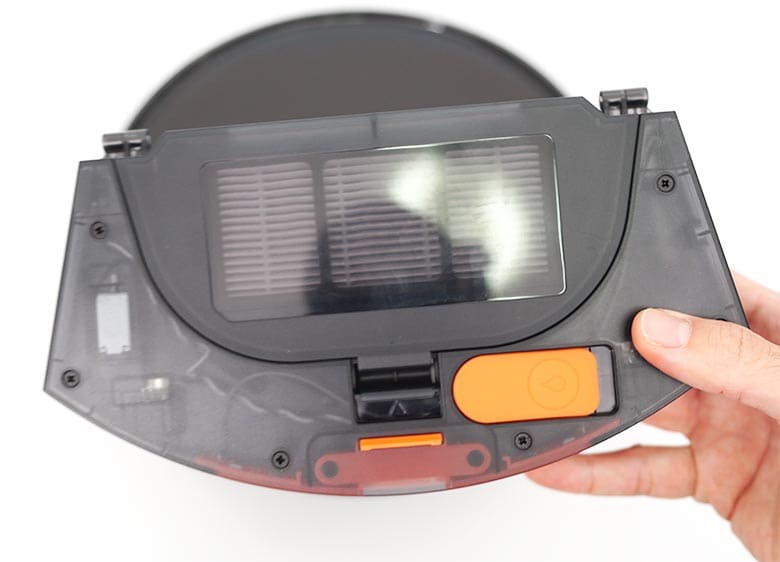 The D7 has a rear-mounted dustbin that also doubles as its water tank. 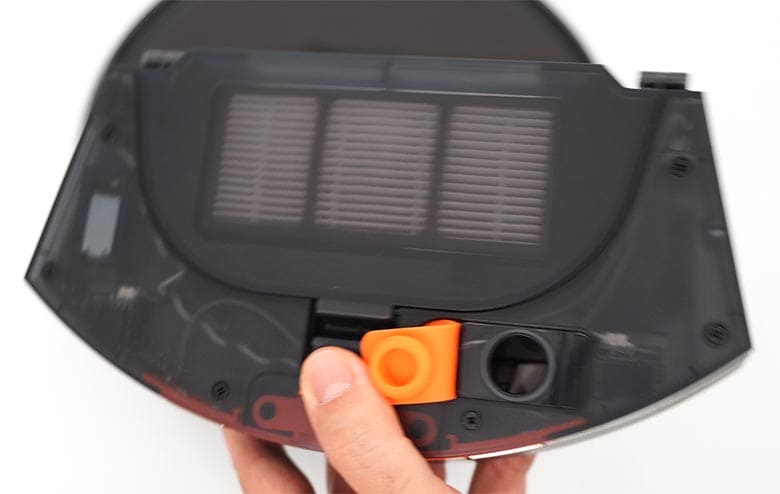 Its dirt volume is sub-par (only 280-ml), but it’s a non-factor with the spacious 3.75-liter bag inside the auto-empty base station.

The water tank volume is slightly larger (300-ml), but I wouldn’t rely on this robot solely for mopping tasks.

Other robot mops like the ILIFE W400 or W450 will do better than robot vacuum/mop hybrids at mopping floors. 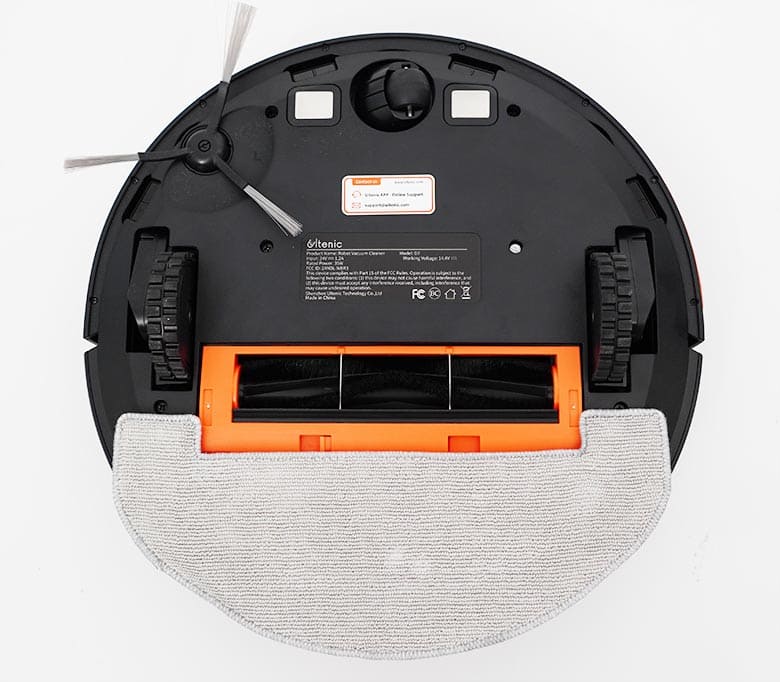 The D7 comes with a mopping pad that consumers will slide behind the dustbin/water tank.

Its rear placement allows this robot to vacuum and mop simultaneously.

This robot has an electronic water tank with water level adjustability through the app.

However, it lacks an active agitation system like the Roborock S7 or a Dreame W10, and it won’t be efficient at stain removal. 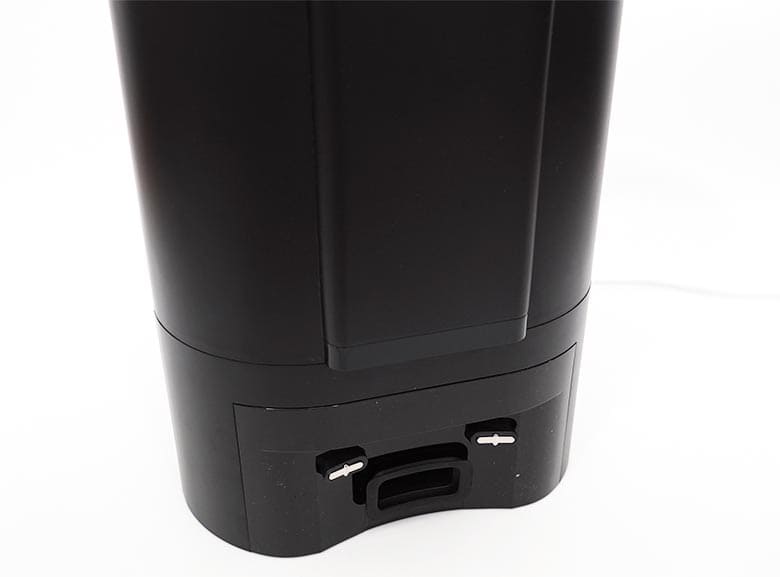 Lastly, we’ll look at the D7 auto-empty base station.

It’s similar to the T10 with its design and front port placement.

Both have a vertical port connecting to the robot’s rear dustbin slot.

Unfortunately, it doesn’t have a ramp, compromising alignment on uneven surfaces.

Ultenic recommends using this on a solid surface, so the ports line up.

One variance with the D7 is its smaller bag (3.75-liter capacity), which will last for 60 days (according to Ultenic). 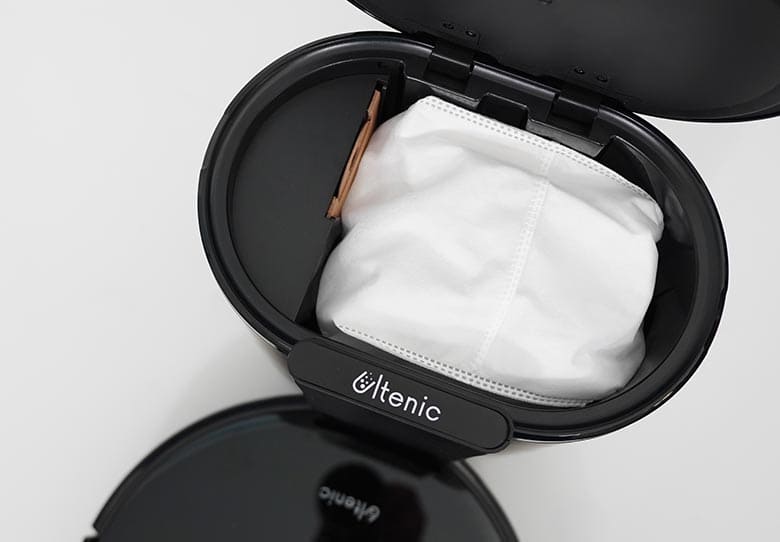 That figure may vary depending on aspects like environment, usage frequency, etc.

The Ultenic D7 is compatible with the Ultenic app. Please note that it does come with a remote, but pairing the robot and app will provide the best user experience since it unlocks all the features. 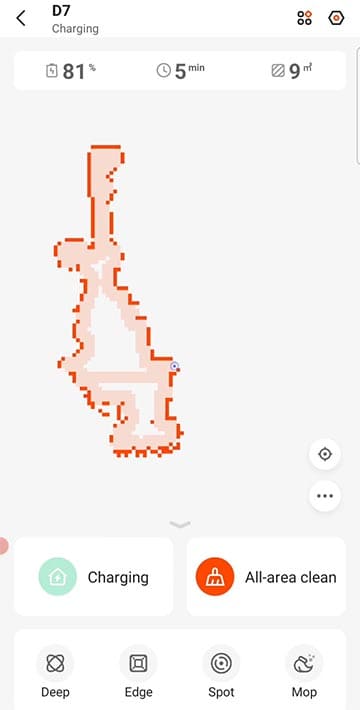 The Ultenic app comes with a live map, but I don’t think it’s beneficial since it’s too small, and the map isn’t very accurate.

Unlike the more expensive T10 with LIDAR, the D7 only uses a gyroscope but does not have an optical sensor, so the map isn’t as accurate. 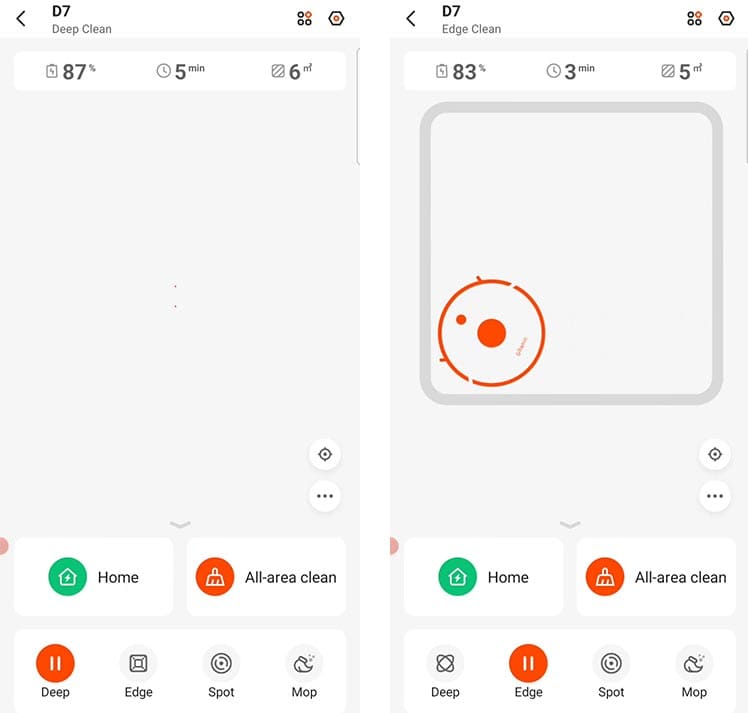 The app enables consumers to choose between four different modes underneath the main interface.

Consumers will have several options with the power and mop settings.

There are three power and mop settings. Please don’t bother with the lowest power setting,, as it doesn’t have enough airflow for debris pick up.

Depending on debris type and volume, I’d stick with the standard or max setting.

When you tap on this icon (upper right), the app shows this option, allowing users to empty the robot’s dustbin on demand. 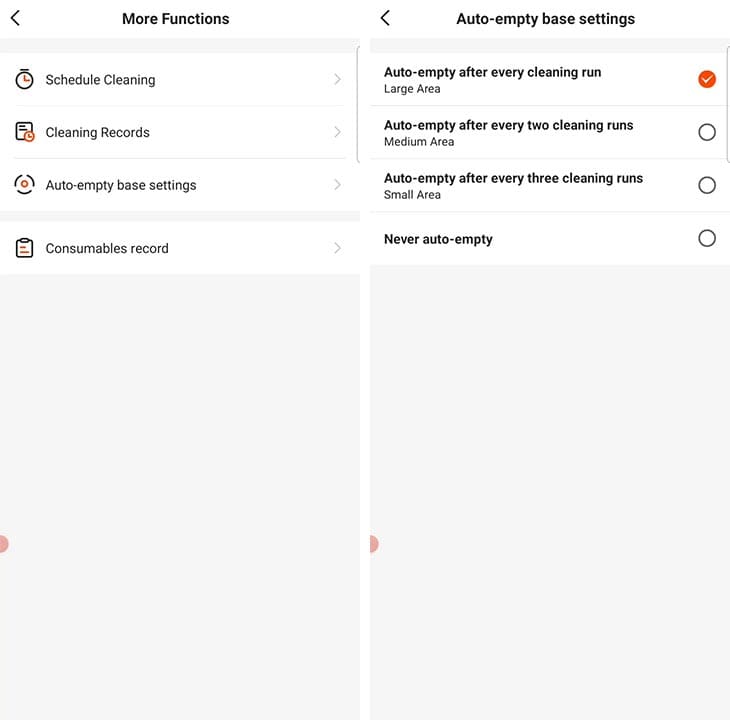 Another option in the Ultenic app is adjusting the self-emptying frequency.

I’d keep it at the default setting (after every cleaning run) to keep things tidy.

It helps consumers locate a lost robot by playing a tune. I used it once during the testing process when it got wedged underneath a storage cabinet. 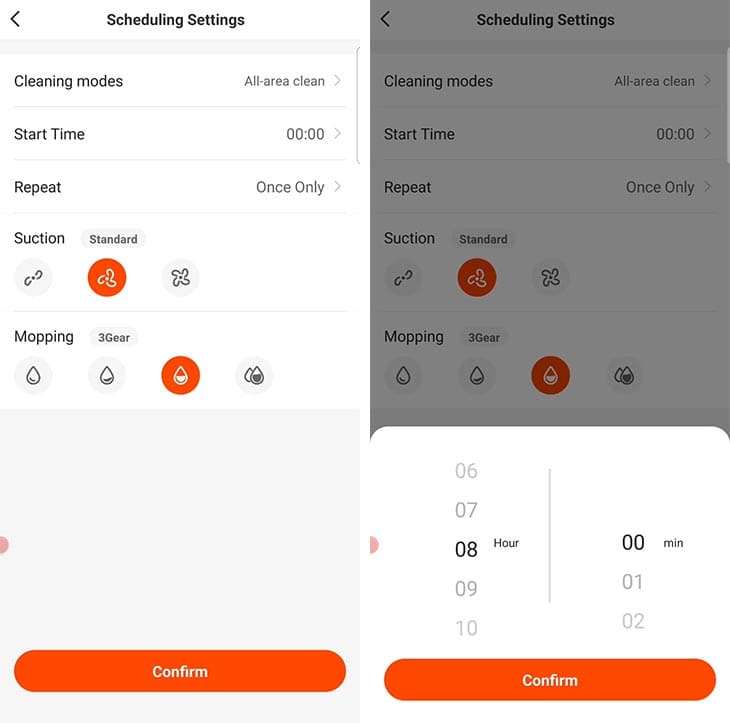 Consumers can schedule clean-ups for the D7 through this feature.

Unfortunately, consumers cannot select a specific area to clean since this robot doesn’t have VSLAM. 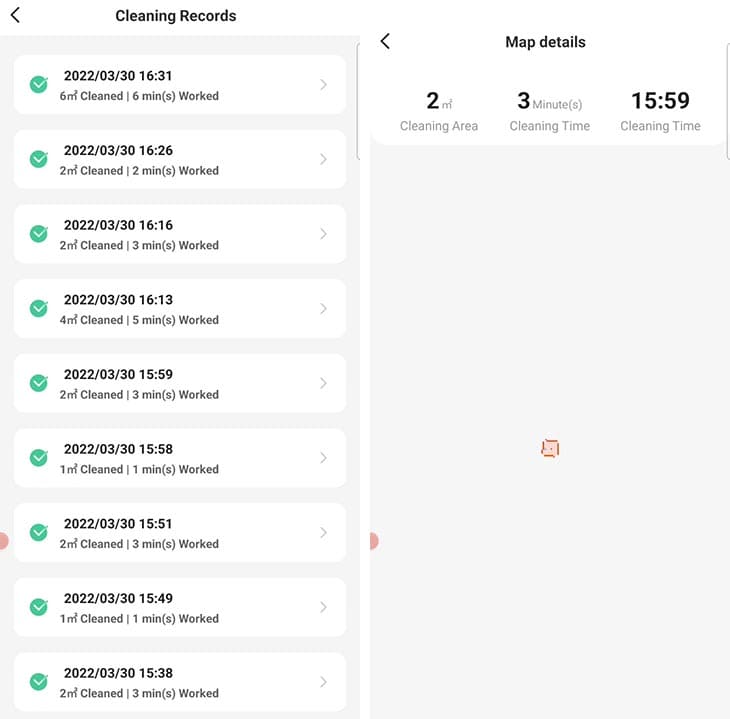 Cleaning records is similar to the cleaning history feature in other brands that shows previous cleaning runs.

There’s no other function except to show how much you’ve used the robot.

It’s similar to a car’s odometer.

When you tap on each run, it shows the corresponding map, run time, etc. 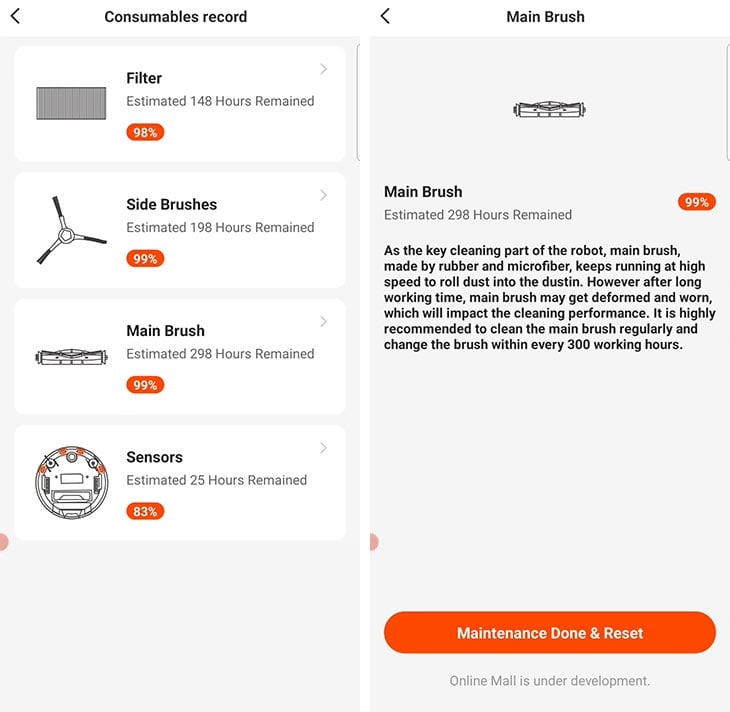 This tab shows when to replace consumable parts like the primary brush, side brush, and filter.

Please realize that this is a time-based system, so consumers need to do their due diligence and check these components visually to determine when to replace them.

How does the Ultenic D7 navigate?

One of the biggest downgrades in the Ultenic D7 is its navigational sensor.

Unlike the LIDAR-based T10, the D7 uses a gyroscope as its primary navigational tool.

This downgrade has several implications.

First, it limits the navigational capability of the D7.

While it can move in straight lines, that’s about it.

This variant doesn’t have any premium features like an invisible wall or no-go zones because it can’t save maps.

Consumers shouldn’t expect too much from this robot in this category since it lacks the prerequisite sensors for the task.

Considering its limitations, I’m impressed with the D7 in the coverage tests. 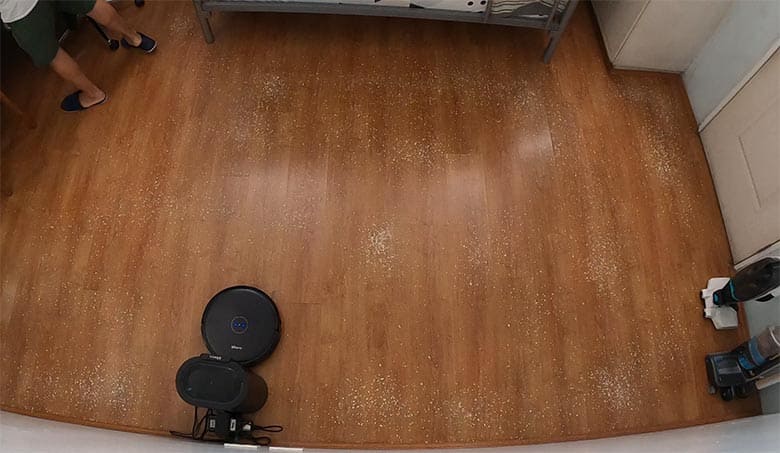 Despite the low airflow, it picked up a good chunk of quaker oats scattered around the room after the first pass. 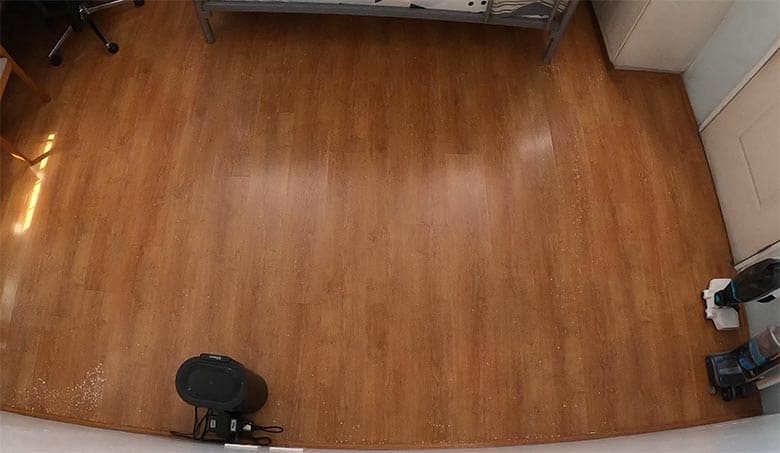 This test shows the hard floor capability of the D7 and its efficiency.

How much power does the Ultenic D7 have?

So I used an anemometer to measure airflow with the D7, and here are the results.

The D7 doesn’t have much airflow, but it has enough to pick up debris on hard floors, which we’ll look at in the next section.

However, don’t expect too much on carpet.

I wouldn’t recommend this variant on carpet since it lacks the raw power. Plus, its auto-empty station isn’t ideal on carpet due to its unevenness.

First, here are the results.

With the scores above, you can see that the D7 is better at vacuuming hard floors than carpet.

It picked up close to ten percentage points more, which may not sound a lot, but for these experiments, it’s significant.

These results confirm that the D7 auto-empty dock isn’t suited for carpet since it relies on a vertical port.

If you’ve read best self-emptying robot comparison, even the Ultenic T10 has this same issue since carpet isn’t a flat surface. 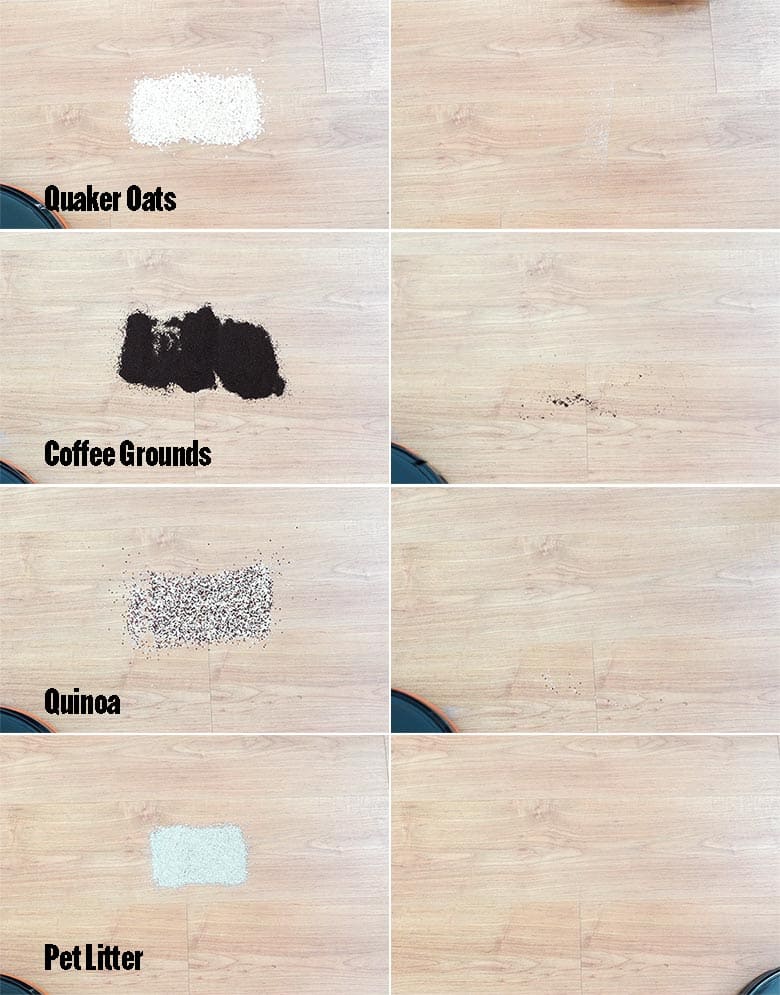 The Ultenic D7 picked up the most on hard floors, evidenced by its 98.65% average. It has enough agitation to pick up various debris, from light quaker oats to heavy stuff like pet litter.

One downside to the low airflow is it compromises its pick-up of debris like sand.

It got an average of 94.73%, which is slightly below average even for a budget self-emptying robot vacuum.

This variant is not something I’d recommend if you need to clean heavy dirt. 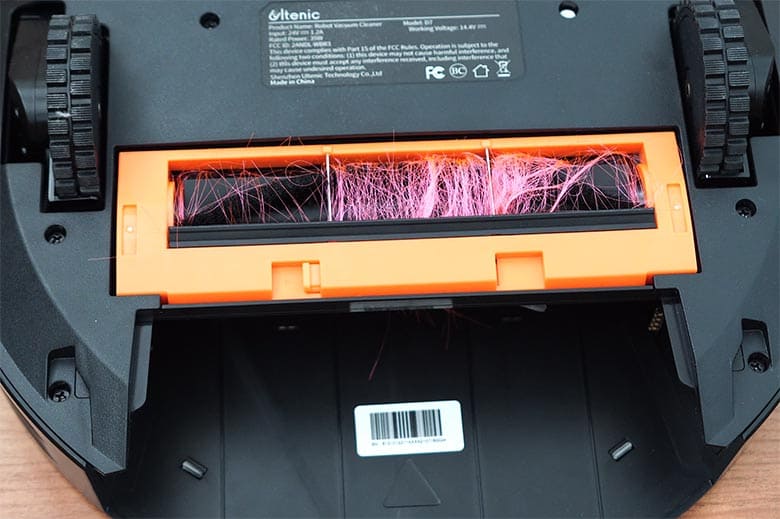 Another struggle for the Ultenic D7 is its inability to resist hair tangles.

Next, we’ll look at how well the D7 picked up on carpet (low and mid-pile). 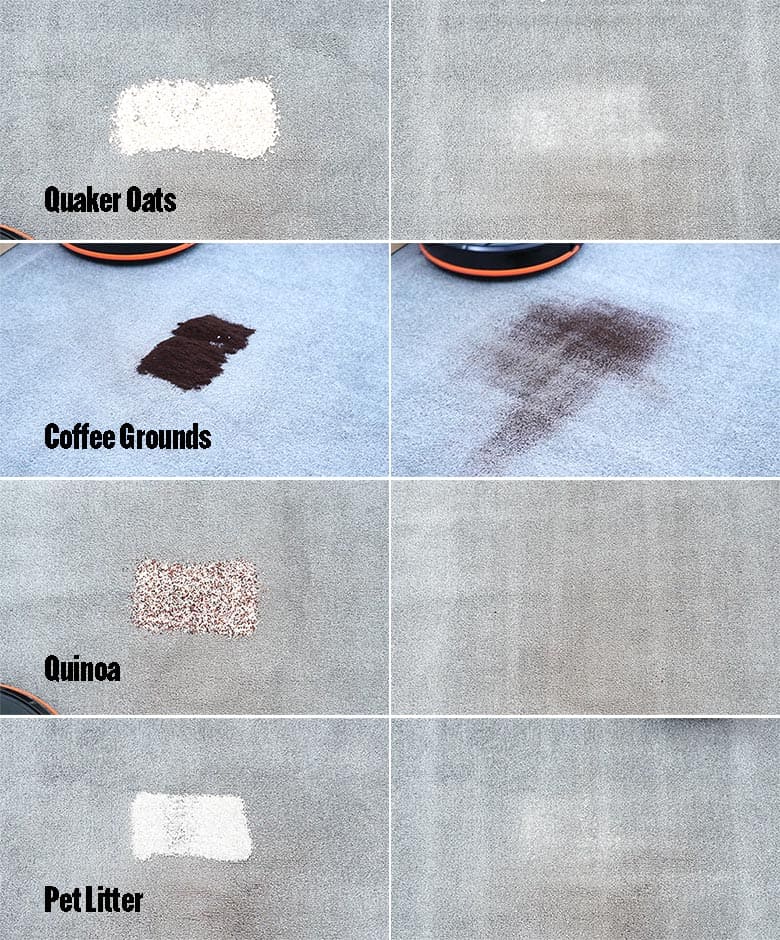 The results reveal that the D7 struggles with two things on carpet, heavy and fine debris.

It picked up the lowest percentage on pet litter and coffee grounds, lower than the Roomba I3 and Yeedi Vac Station (other budget self-emptying robots). 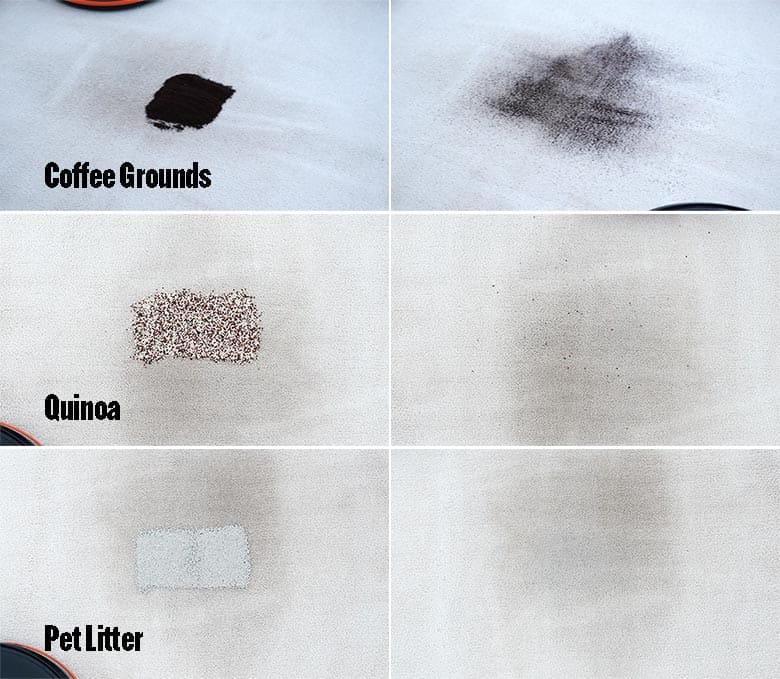 These results nearly mirror that of the low pile experiments. Above-average on light debris but struggles with heavy and fine stuff.

Another experiment I did with the D7 was the deep cleaning test, where I rubbed 100 grams of sand on mid-pile carpet.

Again, the weak airflow is a big reason why the D7 won’t pick up embedded sand well on carpet.

I tested the Ultenic D7 on red wine stains to see how effective it is at stain removal.

Here are the before and after photos.

The results were less than ideal as the D7 only removed some of the stains.

And it wasn’t a clean pass since it left a sticky residue that I needed to mop separately afterward.

This experiment shows that consumers can’t rely on the D7 solely for heavy-duty cleaning but only on light tasks on already clean floors.

How noisy is the Ultenic D7?

I use a sound meter to check the noise level on the D7, and here are the results.

If there’s one plus with the low airflow, it’s the low noise levels. The Ultenic D7 isn’t very noisy, only maxing at 65.9 decibels at the max setting.

So you can use this robot and still have a conversation with your spouse or children at home without raising your voice.

Where can I buy the Ultenic D7?

Right now, the Ultenic D7 is only available direct from the Ultenic website. I’ll update this page when it’s released on Amazon.

Is the Ultenic D7 Worth It?

The D7 is one of the least expensive self-emptying robot vacuum options available, making it a compelling option for budget-conscious shoppers.

But is it worth it?

That would depend on your expectations and how much you are willing to spend.

The D7 lacks critical navigational sensors that hamper its potential, and the low airflow hinders its cleaning performance.

It’s decent on hard floors, but I wouldn’t recommend this on carpet due to the weak motor and suction.

3 Reasons to Purchase the Ultenic D7

After thoroughly testing the D7, I found its performance lacking in several aspects.

It was decent on hard floors but sub-par on carpets with poor results in the deep cleaning tests.

The navigation lacks advanced features like containment, map saving, and selective room cleaning, so it’s limited in this aspect.

So the bottom line is don’t expect too much from this robot. It will move around efficiently, but that’s about it.

The good news is it’s probably the cheapest self-emptying robot vacuum available, and that should count for something, especially for bargain hunters.

The Ultenic D7 is a bargain shopper’s dream. It’s cheap and has decent quality and performance. However, there are limitations to this product that you’ll need to be aware of to avoid any buyer’s remorse. It’s limited with its navigational capabilities since it only uses a gyroscope and it’s only usable on carpet because of the low airfow. If you don’t mind those cons, then strongly consider this product.