Hoover Linx vs Dyson DC59: Is The Price Difference Worth It?

The Linx is one of Hoover’s bestselling stick/upright vacuums and with good reason.

Tech blogs like CNet liked how this product performed on bare floor and carpet as proven in their cleaning tests.

Even with it’s limitations and flaws, one thing is constant – the Linx is cleans.

That’s the reason why even if this product has been in the market for more than 5 years, people still buy this even when newer Hoovers are out.

The Dyson DC59 is one of the more revolutionary cordless vacuums to come out combining the cleaning capabilities of a stick to a handheld thanks to the interchangeable tools in its arsenal.

This machine literally can clean most parts of the house from the floor all the way up to the ceiling.

It’s been so popular that even other brands have copied the look and design because it works.

The biggest downside to the Dyson is the price.

How does these two compare? Well let’s have a closer look.

These two machines are similar and different at the same time.

Since these machines are cordless, it will only cover a small area. Both are capable of cleaning carpet and hard floor which makes it a great tool for quick clean ups in high traffic spots. But the similarities end there.

While the Hoover Linx is strictly a stick vacuum, the DC59 is more than that. When you combine all the attachments it has you’ve got an all-around cleaner that can morph from a stick to a handheld that can clean upholstery, stairs, floors, ceilings, vents and everything in between.

One more note, the DC59 has a few variants the Animal and Motorhead. 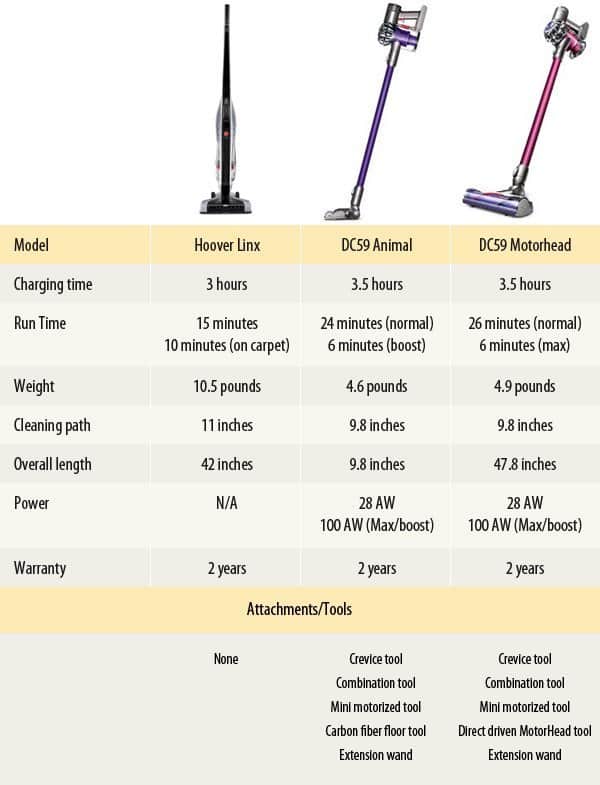 The Linx does not have the swivel feature that the DC59 series has so maneuverability suffers a little bit.

The DC59’s does not have a brush roll on/off feature which makes it less efficient in cleaning large pieces of debris on bare floor because the fast spinning bristles can actually fling large debris around. You’ll be better off using the crevice tool to clean stuff like cheerios or chips.

The Hoover Linx also has a handheld brother called the Platinum Linx that can serve as the above the floor cleaning tool to complement the it.

It comes with 3 attachments – the powerhead brush roll, pet upholstery tool and dusting brush tool that should be able to clean upholstery and other nooks and crannies around the house but it will still lack the reach that the DC 59 series vacuum provides.

But on the plus side, even if you combine the price of the two products, it will still cost less than the Dyson. So if you’re budget conscious, this is a good alternative. Another incentive is the batteries on both machines are interchangeable so it adds to the flexibility.

How they compare cleaning different areas?

Here’s how the linx stick did on carpet…

Based on the video it did a really good job picking up a good amount cat litter and cat nip from the carpet. I’m not sure how plus the carpet is but it was able to clean most of the dirt scattered.

Biggest difference would be the brush roll.

The Motorhead’s brush is a lot larger and Dyson claims to produce 75% more cleaning power than the standard DC59.

This is the main reason why you’ll hear in the video that the Motorhead seems to pick up better on carpet – that’s the effect of a larger brush roll and stronger agitation.

Both are equally adept at cleaning carpet but you’ve got to remember that both will struggle on very thick and plush carpet because it will not have enough suction and beater bar power to do so.

The one think the Hoover Linx has over the DC59 is the ability to shut off the motorized brush roll. This is important if you don’t want to scratch the surface of your floors.

Suction is strong enough to pick up dirt on bare floor surfaces like tile, watch this to see what I mean…

Even on the grooved areas of the tile it was still able to suck up all the cat litter on there so this machine won’t have a problem getting through dirt on hard wood or any other type of bare floor surface.

It also has a recessed area so that larger pieces of dirt like cereal can go through.

The Dyson DC59 Motorhead in particular is also very good on bare floor. It was able to clean most of the dirt in one pass. But not having the brush roll on/off feature did scatter some dirt.

You’ll notice that some of the dirt and hay bounced around because of the speed of which the brush roll was turning. It was flinging some of the debris around instead of picking it up.

So in essence, the lack of an on/off feature on the beater bar affected the bare floor cleaning performs just a little bit – it created a little bit more mess than the Linx.

Above the floor cleaning

Hand’s down the Dyson DC59 wins here because it comes with the extension wand. And a bunch of other tools that can clean the upholstery, tables and vents (yes even ceiling vents).

The handheld linx should be able to help but I find that the tools included with it was lacking in terms of cleaning performance.

The most useful of the attachments was the brush roll attachment that is great on cleaning pet hair on upholstery.

The Hoover Linx loses here. On a full charge the battery will only give you 15 minutes of run time (it goes down to 10 minutes if you turn on the brush roll).

Compare that to the longer 26 minutes run time for the DC59 Motorhead which is almost 50% more.

The difference between the Hoover and Dyson is significant ($300 difference!). A Hoover would cost just below $140 while the DC59 MotorHead costs over $300! The DC59 Animal costs around the same price give or take a few dollars. Difference between these two is the main cleaning head with the Motorhead having a larger diameter and having more agitation.

But remember that the latter is essentially two products in one. And you’ll get a longer running time and better build quality (in my opinion).

You really can’t go wrong with either one. Both will clean well on carpet and bare floor.

You’ll just have to know your needs and budget.

If you’re willing to spend more than $300 for a cordless vacuum that can do it all then go for the Dyson.

If you’re unwilling to fork out that much dough and don’t mind the lack of versatility then go with the Hoover, you’ll not regret doing so. It only costs less than $140 so it’s a bargain for the performance but remember it does not have any capability to clean above floors.

The Linx Stick also comes in a corded version, just a heads up.

Remember that these two machines will not deep clean carpet so set expectations accordingly. But for quick midweek clean ups it’s hard to beat either of the two products you see here.