How to Remove Roller Brush from Shark Duo Clean

Author: Garrick Dee Updated: November 1, 2020
Tags: How To
I hope you like the recommended products. Just an F.Y.I., there are affiliate links in this post, and if you click any of those links, I’ll earn a commission. 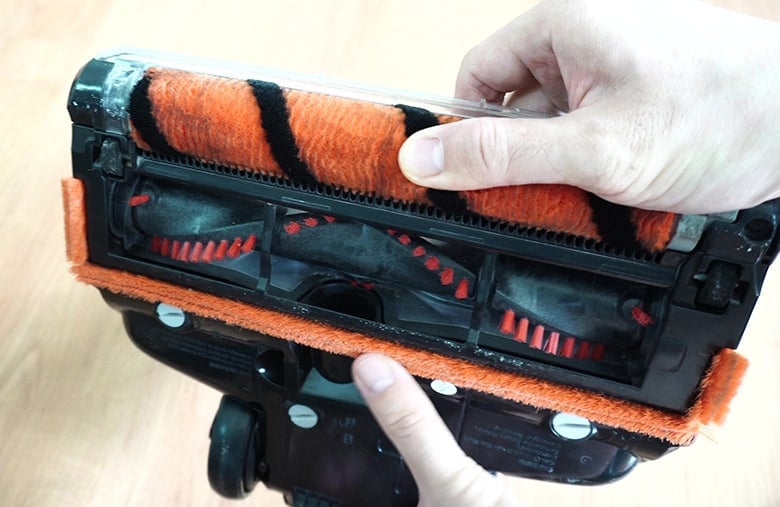 For this tutorial, we’ll look at how to remove the roller brush from a Shark Duo Clean nozzle.

Cleaning the brush roll is an integral part of keeping any Shark vacuum running its best.

The Duo Clean is perhaps my favorite tool for cleaning hard floors because of its efficiency and the bright LED headlights that help a great deal in tracking dust.

However, one issue with the Duo Clean nozzle, at least the earlier ones without Zero-M, is hair wrapping around the brush roll.

It won’t wrap on the roller, but on the brush behind it, so it’s essential to remove any hair and other stuff that may impede airflow.

Steps for other models may vary, so use the information you see here as a guide.

How to remove and clean roller brush from Shark ION P50

Removing the roller from the ION P50 is a simple process, and you’ll need one tool – a coin wide enough to remove the three bolds underneath.

The first step is separating the tube from the frame by pushing a button (check photo) to release the lock. 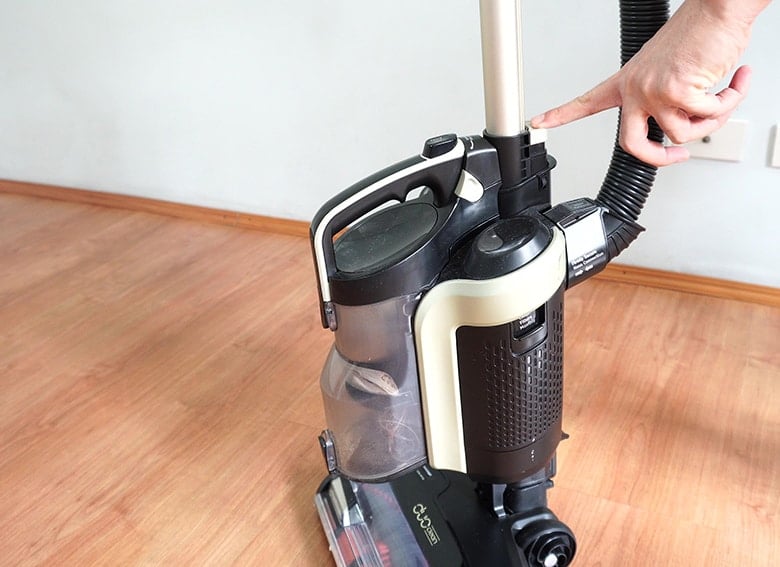 After removing the tube, press the latch over the dust container to remove it from the frame. 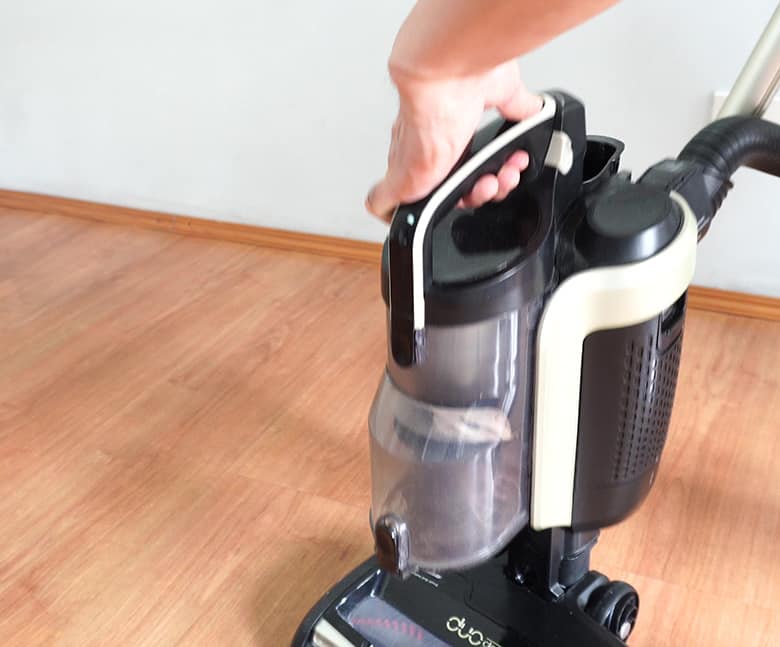 These steps remove most of the bulk away from the nozzle, so it’s easier to clean.

In the ION P50, there is a release latch on one side of it with an “eject roller” written. Gently push it forward to release the roller. 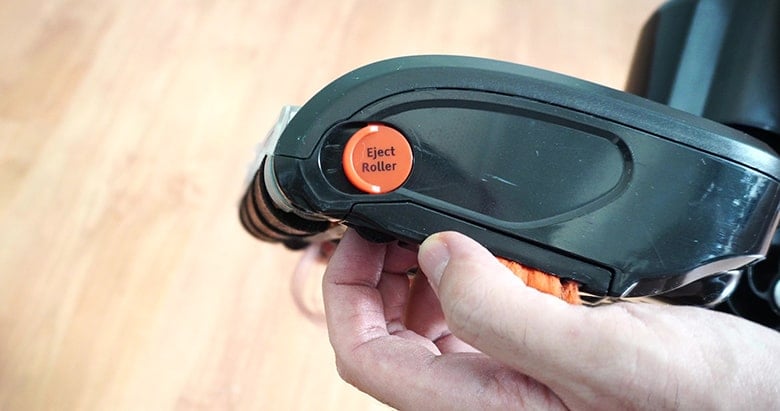 Make sure to have the nozzle low to the ground or have another hand to catch it, so it doesn’t drop to the ground. Once you push the lever, the roller pops out. It’s something to keep in mind.

Once you have the roller out, it’s easier to clean.

Shark recommends only using water to wash the roller and drying thoroughly before returning it to the vacuum. 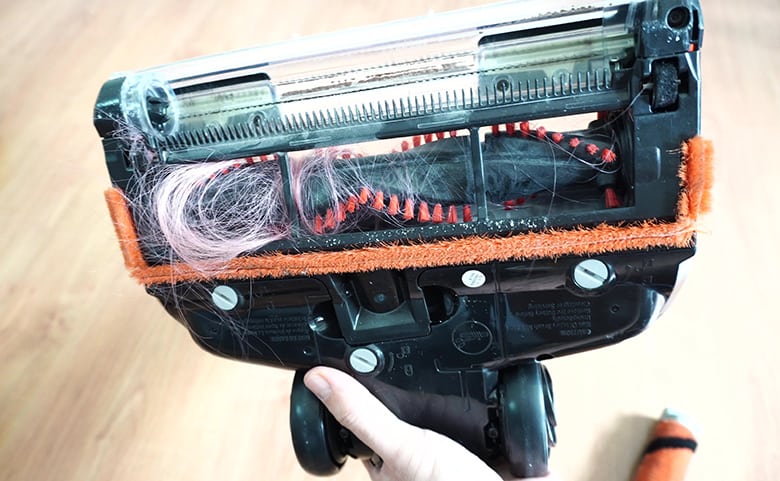 For the ION P50, cleaning the roller will be easy since it pops out. However, the brush behind it does not. So you’ll have to remove the plate by unfastening three bolts.

You could use a flathead screw, but a coin with enough width should do the task.

After removing the brush guard, you’ll have more space to remove any hair using scissors and other debris clinging to it.

There are grooves across the brush, which makes this task easier.

Step 4: Cleaning Other Areas of the Nozzle

You’ll also notice dust and other contaminants sticking on the various nooks and crannies. One efficient way to clean these areas is by using a handheld vacuum with a brush attachment. 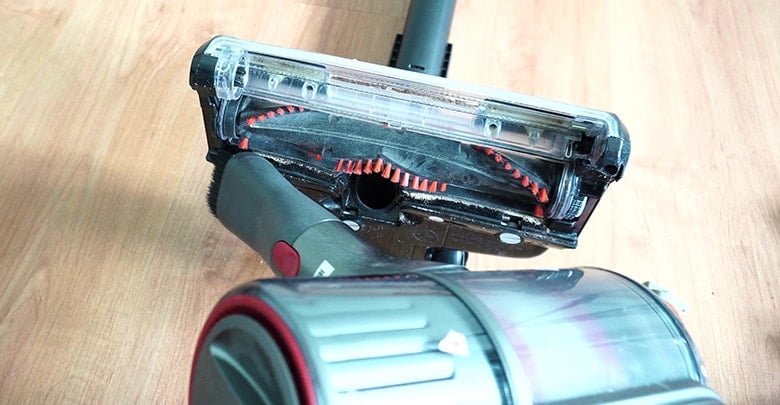 For this demonstration, I’m using the Roborock H6 stick vacuum. It comes with a brush attachment that’s excellent for this task.

Make sure to clean the two big wheels behind the brushes since dirt will stick on it and source of scratches on hardwood floors.

Don’t forget to check the small wheels at the sides of the guard as dirt can build up in these areas. You can use a damp cloth to tidy up these parts and to remove any contaminant or hair. 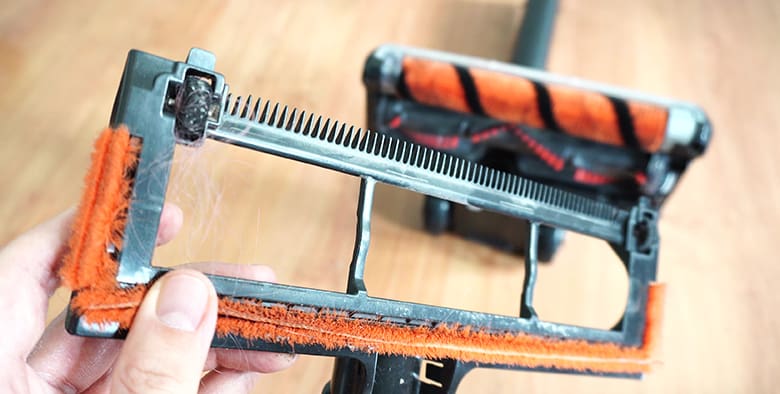 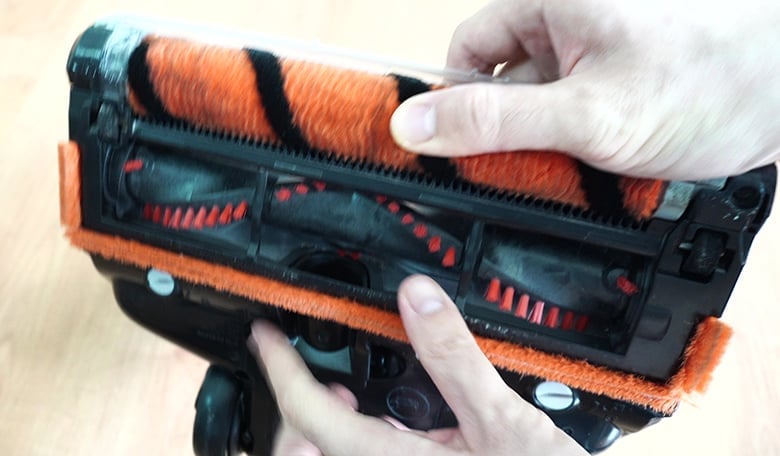 After cleaning the brush, reattach the brush guard and bolt on the three fasteners. Don’t overtighten it as it easily strips since it’s a plastic part. 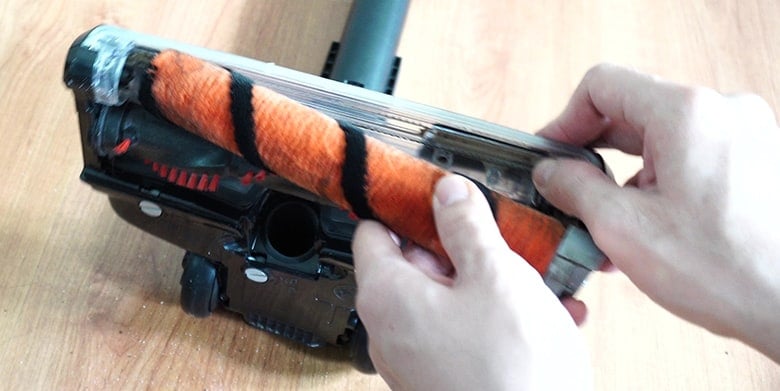 Next is attaching the soft roller bar and locking it in place. The roller only goes in a specific direction, so it’s pretty idiot-proof.

The last step is to reattach the tube on the frame in its upright configuration.

Note that removing the roller on other models like the Shark APEX and NV-800 series. Most of them will have eject buttons that push it out.