Author: Garrick Dee Updated: January 5, 2022
Tags: Comparisons
I hope you like the recommended products. Just an F.Y.I., there are affiliate links in this post, and if you click any of those links, I’ll earn a commission. 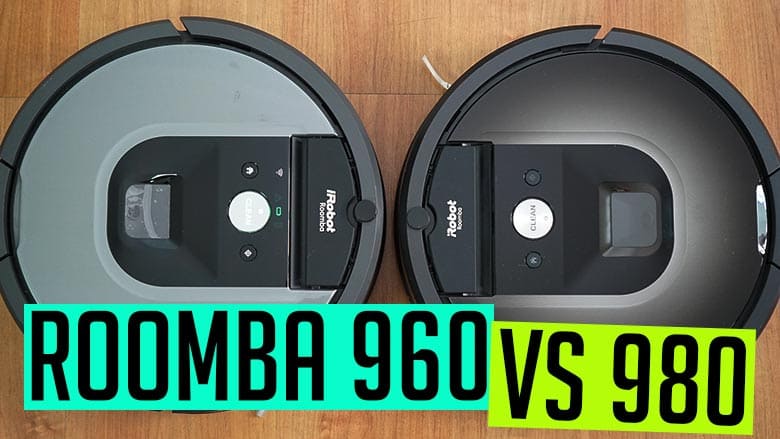 When the iRobot released the Roomba 980 several years back, it was their first with smart navigation. Soon after, the 960 came out.

What’s the difference between these models? Technical specifications were pretty vogue, so I decided to test both to find out, and this comparison resulted from it.

The Roomba 960 and 980 are iRobot’s cheapest alternatives with intelligent navigation, but which option is better? I’ve put it through a series of tests with navigation, cleaning performance, and more to find out.

* If you click this link and purchase, we earn a commission at no additional cost to you.

These two variants sit right at the middle of the Roomba product range between the E-Series and I-Series robots.

Unfortunately, it only has the iAdapt 2.0, meaning it cannot save maps. So the navigational functionality is limited to traversing in straight lines.

There’s no access to more advanced features like keep-out zones or zoned cleaning – which is only available in select I-Series options (I6, I7, I8) and all S-series robots. 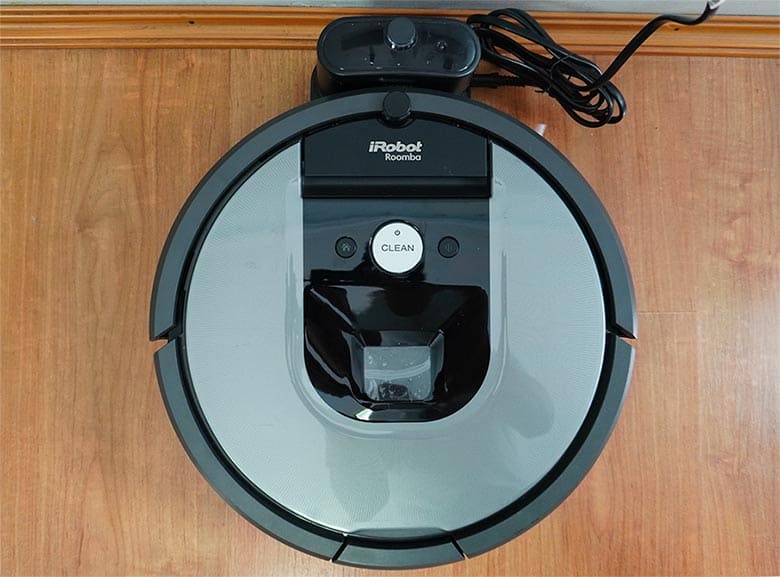 The Roomba 960 was released later than the 980 and provided a less expensive alternative to consumers. However, the difference isn’t much (as of the posting of this article). And considering the downgrades with run time and performance (more below), the 980 may be the better option if you can obtain it at a discount.

Two downgrades include a smaller battery (1800 vs. 3000 mAh Li-ion) and a weaker motor. The former isn’t much of an issue since it has recharge and resume, so it’ll resume cleaning if it doesn’t finish previously.

Yet the latter can be a sticking point as the 980 clearly picks up debris better. Still, the 960 is decent, even on carpet where it did better, and it would be a good option if you can get it for less than the 980. 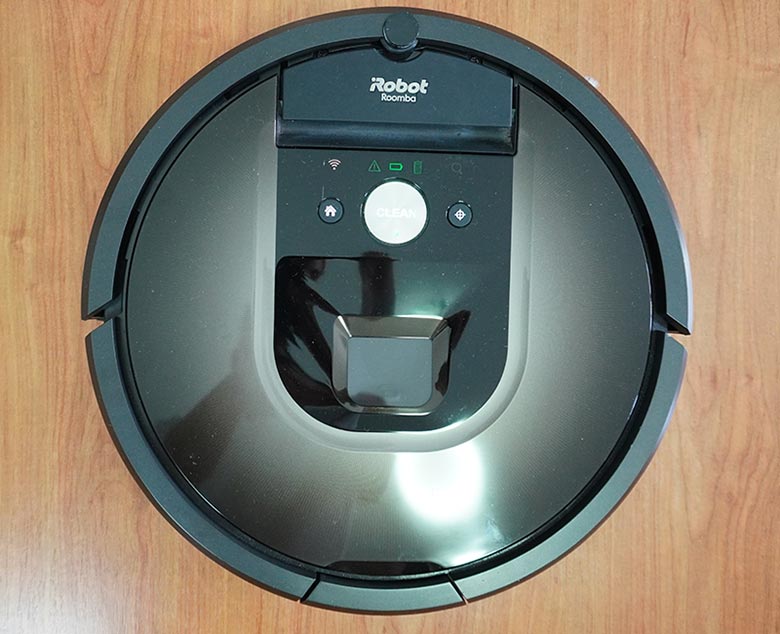 After testing this robot extensively, the 980 is one of Roomba’s best options if cleaning performance is a high priority.

It picked up more debris across all the cleaning tests versus the 960 on hard floors and carpet.

Airflow tests reveal the Roomba 980 doubling the 960’s score in its max setting. Even in Eco mode, it had more airflow, enabling it to pick up more. And combine it with the larger battery, the 980 still runs further – up to 120 minutes.

If you don’t mind not having the Imprint Smart Mapping (or the option to save maps) plus the advanced navigational features and only value debris pick up, the 980 is an excellent option. 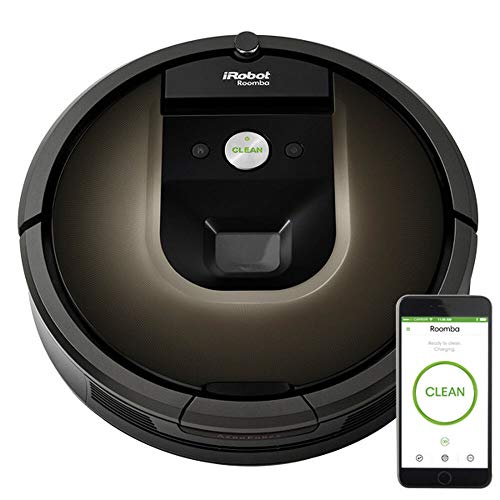 BUY NOW ON AMAZON
We earn a commission if you click this link and make a purchase at no additional cost to you.

Similarities between the Roomba 960 and 980 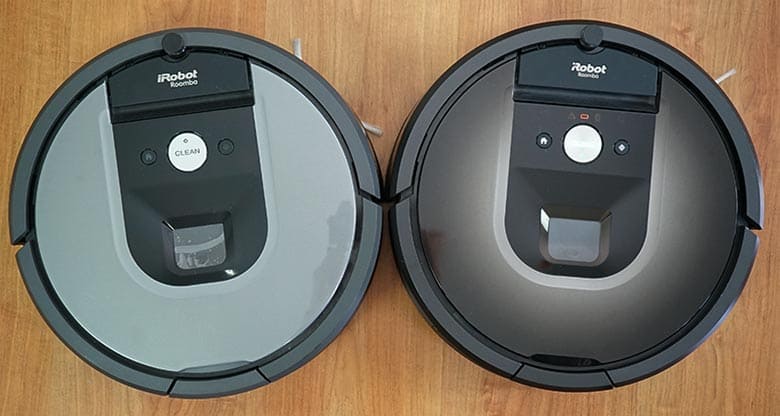 There are a lot, and I’ll enumerate them below.

1. Navigation: Both robots have the iAdapt 2.0 navigation that incorporates a top-mounted camera and SLAM. These machines traverse in neat rows but lack the Smart Imprint Mapping only found in select I-series and S-series robots.

2. Brush layout: The 960 and 980 have the same brush type and placement underneath. 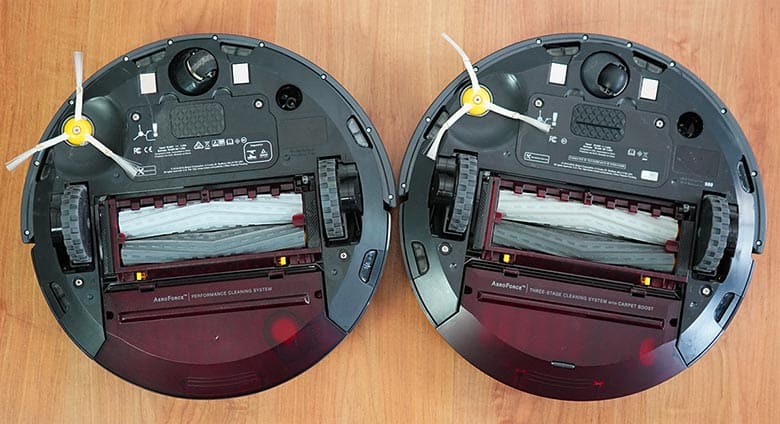 5. Dustbin design and capacity: The dustbin for both robots load from the rear and have the same 6-liter volume – one of the largest in iRobot’s product line.

7. App compatibility: The Roomba 960 and 980 are compatible with the iRobot Home app. Each has the same set of features, with a few exceptions.

Differences between the Roomba 960 and 980

Next, we’ll look at the differences, most of which are found within.

I mentioned earlier that both robots have the iAdapt 2.0, which combines a camera and SLAM for navigation. This combo enables both to traverse in neat rows and pinpoints their location, making either an excellent option for cleaning larger homes.

Since a camera heavily relies on a light source, iRobot placed a secondary optical sensor underneath similar to the one found in the Roomba I3 and Roborock E4 as a backup if the lights go dim.

I’m not sure if the camera has night vision, as iRobot doesn’t specify, but I’m guessing it doesn’t, so it’s best to run these robots during the daytime.

Coverage is also excellent as both picked up most debris I spread around the room, except for areas it didn’t fit.

Dirt detect tells the robot to do additional passes on dirtier areas, and this technology is quite handy on surfaces like carpet. 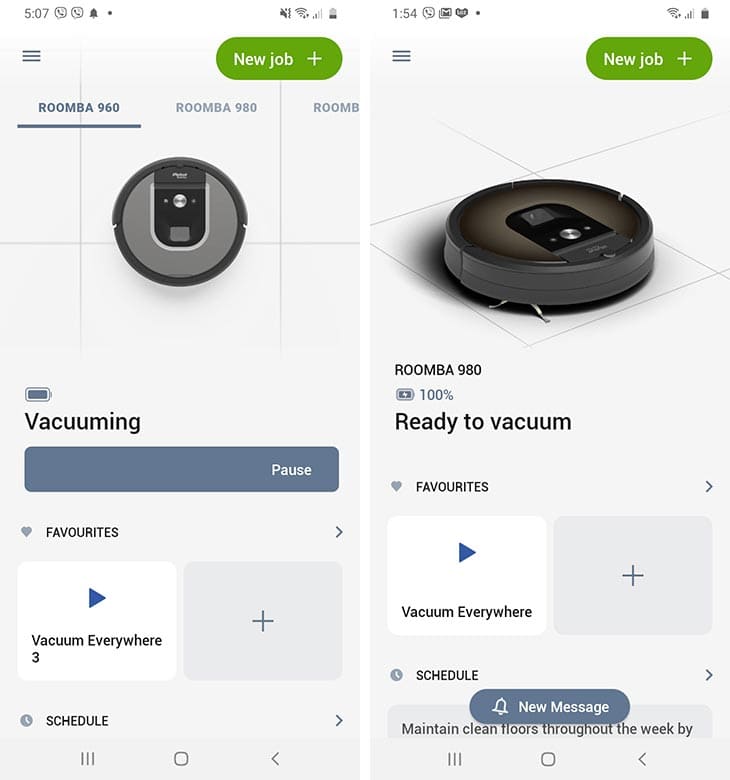 Both robots are compatible with the iRobot Home App. The interface is quite basic, only showing a graphic when the robot runs.

Also, the app features are simple compared to other brands in its price range like Roborock and Dreame – both of which have live maps and access to features like invisible wall and no-go zones.

The iRobot Home App does these functions.

First, it allows users remote access to the robot. So even if you’re out of the house, it’s possible to turn on the robot.

Second, users can schedule clean-ups once per day. The app also enables the robot to run when it detects you are leaving home. 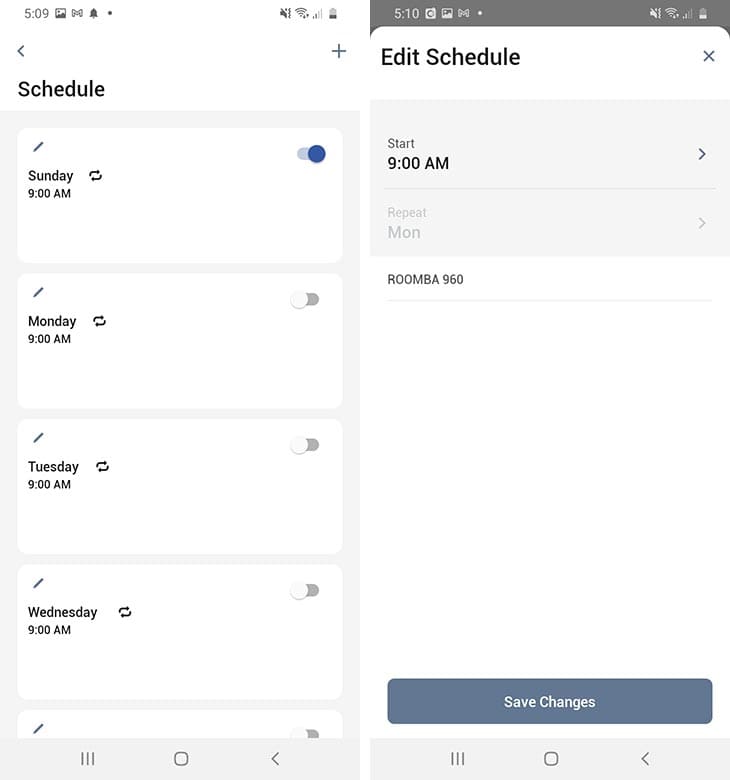 Lastly, you can tweak the robot settings from the number of passes, enabling/disabling edge cleaning, and more.

The only difference is the option for the Roomba 980 app to select power settings, something absent in the Roomba 960 since it only has one setting.

Robot vacuum manufacturers don’t have a unified spec to disclose power. Most use watts as a measure, but it can be misleading. So I decided to use an anemometer, which measures air turbulence in a specific area, the main brush.

It more than doubles the output of the 960, and you’ll see in the cleaning performance section how it affects debris pick up.

Next, we’ll go to the main section, which is how each robot cleans different debris types.

I put both robots through a series of tests of different debris sizes to see how much it picks up.

And here are the results.

You can see that the Roomba 980 picked up more debris in all the cleaning tests, from Quaker oats to heavy debris like pet litter.

The higher airflow plays a significant role in why it did better. In the sand on hard floor test, the power variance is most noticeable as the Roomba 980 picked up a perfect 100% versus the 97.06% score of the 960.

Which is better on hard floors?

Hands down, it’s the 980, thanks to the superior airflow, enabling it to pick up more debris. The results in various tests were consistent, and regardless of debris type, the 980 will do a better job cleaning this surface.

Even in Eco mode, it still has more airflow, and there’s no need to use the Performance setting. I suggest using the automatic option where the robot stays in the lower setting, only increasing suction over the carpet.

The airflow difference is magnified in the sand on hard floor test, with the 980 making a cleaner pass.

It looks like a clean pass, but the Roomba 960 left more sand particles after the test.

One area that most round-shaped robots struggle with is cleaning edges. The Roomba 960 and 980 are decent but not great, with almost similar results cleaning this area.

Roomba 960 result after cleaning the edge.

I hoped for better results, especially for the Roomba 980 since it had excellent cleaning dynamics.

It wasn’t as good as other robots I’ve tested, like the Roborock S4 Max, Ecovacs T8 AIVI, and ILIFE A10.

The Roomba 980 is better for cleaning pet hair than the 960. It resisted more hair tangles on both the five and seven-inch tests. 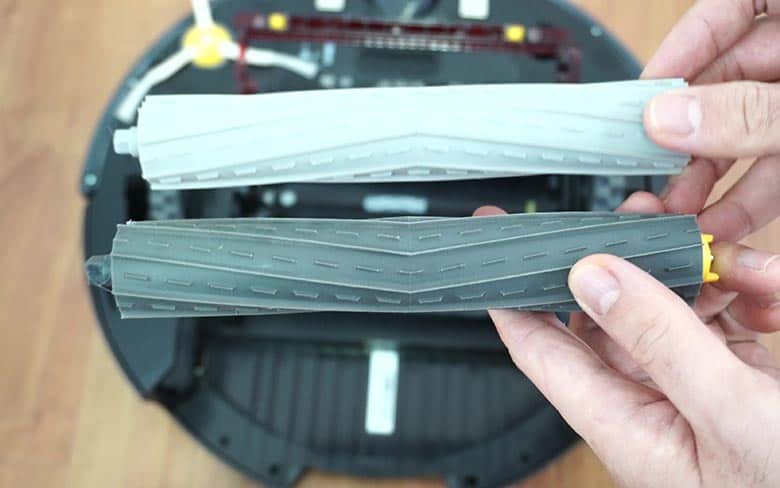 The Roomba 980 was better at resisting tangles with hardly any hair after the 5-inch test.

In comparison, the 960 didn’t do as well, with most of the hair wrapping on the rollers. I didn’t weigh the hair since a tiny percentage only went inside the dustbin (less than 10%). 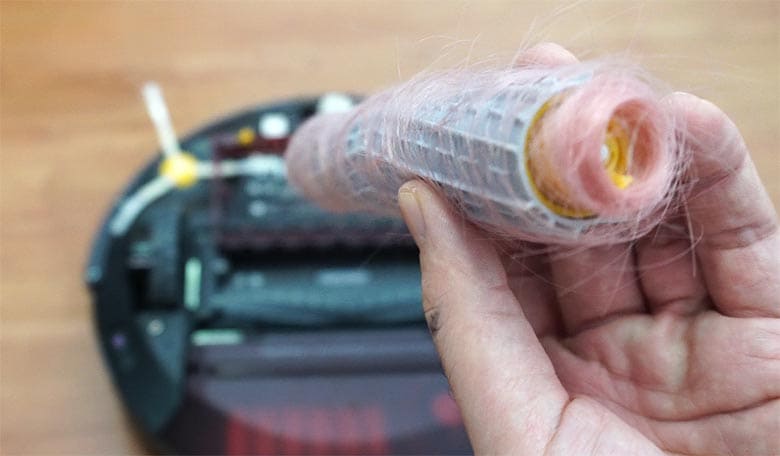 This much hair wrapped on the Roomba 960 roller.

I’d go with the 980 if you need to clean pet hair as it resists tangles better.

Which is better for carpets?

Again, the edge goes to the Roomba 980 with its higher airflow. The Roomba 960 yielded better results on this surface than hard floors but still lags behind the 980.

My choice between the two would be the 980 since it consistently picked up more in all the cleaning tests on this surface.

Not only does the Roomba 980 pick up more debris, but it will also run longer.

It has a larger capacity, 3300 mAh Li-ion battery, and iRobot says it runs for up to 120 minutes in Eco mode.

Contrast that to the Roomba 960’s 1800 mAh Li-ion battery with a 75-minute run time – it’s a significant difference.

Please realize that the 980 runs longer and has higher airflow, so it picks up a higher percentage of debris.

One downside of having more suction is the noise. The Roomba 980 is the noisier robot with up to 74.2 decibels in its highest setting and 66 decibels on Eco mode.

Avoid using these robots late at night, especially if you’re near your neighbors or you’ll get complaints.

As with all robot vacuums, Roomba products need maintenance to run at their peak. I’ll list down the components that need cleaning or replacing for your information.

Check out my article about cleaning a Roomba 980 if you’re interested in knowing how these robots are maintained. Since the 960 and 980 are the same robots with design, the steps you’ll see there will apply to both.

One thing I like about Roomba products is the sheer availability of parts. Even with older models like these two, there are many options from iRobot and other manufacturers. Components from filters, batteries to more obscure ones like the drop sensor or side wheel assembly are available from stores like Amazon or eBay.

You can purchase both these robots from online stores like Amazon. Check the links below for the latest pricing and any promos (if it’s sale season).

The Roomba 980, 981, and 985 are essentially the same robots, so get the least expensive of these three.

Disclaimer: I will earn a commission if you purchase through any of the links above, but at no extra cost to you, so it’s a win-win for us!

These robots have a lot of similarities, but the two differences could be deal-breakers either way. I feel that the Roomba 980, even if it’s priced higher, is still the better value option. Not will it run much longer, it also cleans better – both surface and embedded debris.

The Roomba 960 is decent but a notch below the 980 despite being the cheaper alternative (if the 980 isn’t on sale).

However, I feel that the downgrades aren’t worth the cost savings. To help you, I’ve listed reasons why you should purchase either.

4 Reasons to choose the Roomba 980

3 Reasons to choose the Roomba 960

The Verdict: Roomba 980 is the Better Value Option

After testing both robots extensively, the results were convincing. The Roomba 980 is the better robot overall, especially in two key aspects – cleaning performance and run time.

Considering these models have the same features, I recommend the 980, even if it’s the more expensive option.

I feel that the 960’s downgrades are worth the cheaper cost. Since it doesn’t clean as well and doesn’t cover as much ground.