Author: Garrick Dee Updated: October 24, 2020
Tags: Comparisons
I hope you like the recommended products. Just an F.Y.I., there are affiliate links in this post, and if you click any of those links, I’ll earn a commission.

When it comes to robot vacuums very few brands can match the iRobot in terms of the performance to price ratio.

On paper the Roomba may have primitive features like using a random cleaning pattern and infrared sensors.

But in terms of real world practicality the Roomba simply works though not perfect. That’s why it is one of the bestselling robot cleaners we have right now.

Perhaps only the Neato can keep up with it in terms of price and performance.

Even the Dyson 360 eye with all its high-tech innovation and cleaning performance costs a fortune. and it won’t clean under your bed. This is something that any robot cleaner should be able to do.

The former is the most feature-rich in the Roomba 700 series. While the 880 represents iRobot’s departure from the bristled brush design and transitioned to rubber “extractors” that lessened the need for maintenance on the brush roll.

Let’s look at these robots side by side and see how they differ aesthetically. 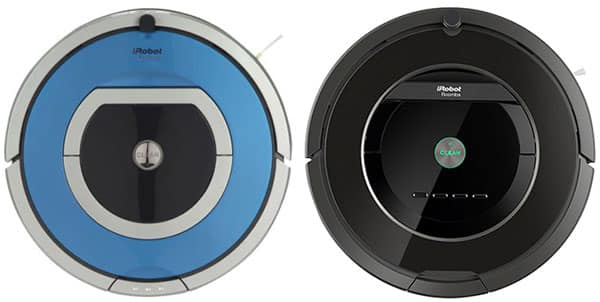 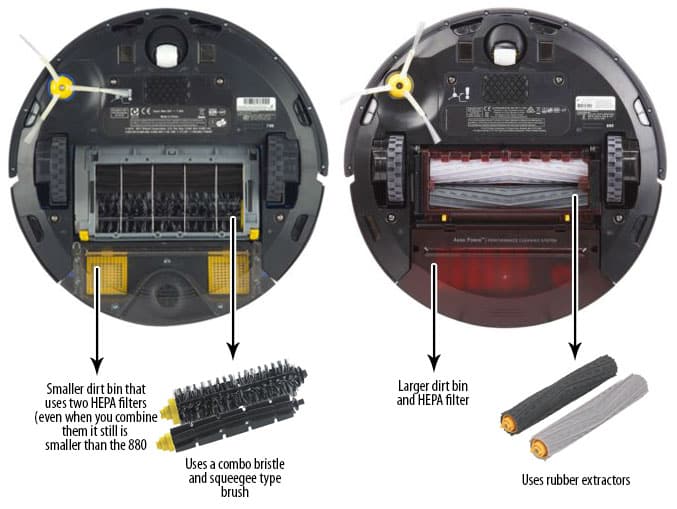 Both the 790 and the 880 have the same user control layout (on top). Biggest difference would be the color.

Roomba 790 has a predominantly light blue finish in the middle with a gray other ring (these are the bumpers).

Take note that the 790 is basically the same machine as the 770 and 780 the only difference is the accessories included in the package.

The 880 uses a combination dark gray and charcoal finish which is less prone to getting dirty (at least aesthetically).

Both these machines have the same dimension – diameter and height so these robots will be able to clean underneath beds with a clearance of at least 3.8 inches.

Another similarity is underneath the hood so to speak. Both of these autonomous cleaners use the same vacuum motor and have HEPA filtration.

Also the navigation system of both of these use are the same – a random cleaning pattern. 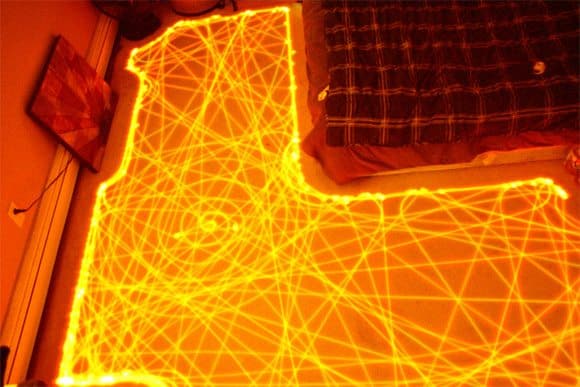 Roomba only upgraded their navigation system in the 980 that uses a pattern similar to the Neato Botvac.

This means a more predictable pattern that has better efficiency. I’ve already compared the 880 and the 980 in this article so make sure to check that out.

So is the $20 difference worth it? That’s what we’re going to find out in this next section.

When you turn both the robots upside down, you’ll see the biggest difference between these two robots – the motorized brush.

The Roomba 790 uses a similar style brush that other Roomba robots use ever since they started manufacturing robot vacuums that combines a bristle and squeegee type brush.

The combination of these two has been very effective. It is a big reason why the Roomba has been one of the bestselling robot cleaners for over 2 decades already.

The bristles pick up a lot of dust bunnies and hair (both human and pet). While the squeegee brush pick up dust and other fine debris.

But here’s the problem. This requires constant cleaning to remove wrapped up hair and dust bunnies that takes time to clean.

Depending on how often you use your robot vacuum, you may have to spend 10 to 15 minutes cleaning the brush roll every week.

In an effort to save consumers time from constantly cleaning the bristled brushes, iRobot has moved away from the bristle brush and developed a newer system that does not use any bristles or squeegee.

They call it the AeroForce Cleaning System that Roomba says will provide 50% better cleaning performance.

At the heart of this is what they call the tangle-free extractors. 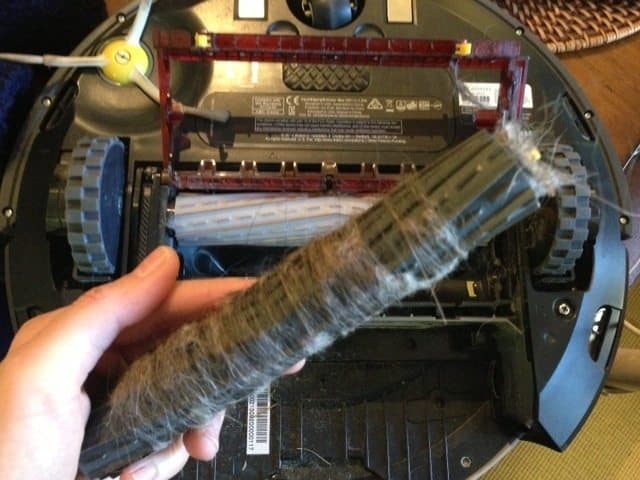 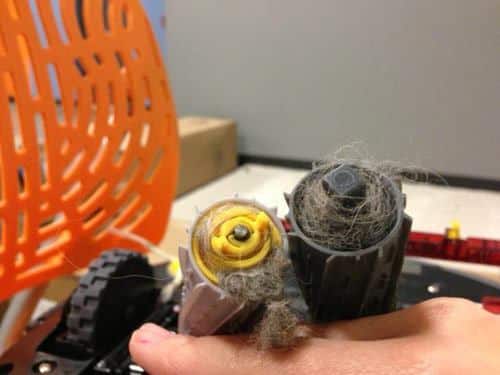 You have someone living with you at home who has long hair, you may encounter the same thing and you’ll have to do your due diligence and clean those extractors to maintain performance. But the great thing about these extractors is that you don’t need to clean it as much as the 700 series.

Larger dirt bin (and HEPA filter) for the 880

Another upgrade in the 880 would be the larger dirt bin.

According to Geek.com, it has a bin that is 60% larger compared to the 700 series. And if you look at the side by side photo of the bottom section you’ll see a substantial difference in terms of bin size.

The larger bin also allowed iRobot to equip the 880 with a larger HEPA filter. This means better filtration and less change of allergens from coming back out of the exhaust.

It also means less interruptions just to empty the bin – great for the consumer.

Despite the claims of iRobot that the 880 has better noise reduction consumers say otherwise. This robot will roughly produce the same decibels as the older 700 series.

Another upgrade would be the vacuum motor that iRobot says has 5 times more suction power that also means better performance overall.

Though the exact figures aren’t specified but based on video reviews in terms of pickup performance the 880 scored better.

Obviously you will not let the Roomba clean a mess like that but for in-between clean ups it will be an invaluable tool to have to keep dust and sand from piling up.

If you have pets, this vacuum also does a good job in picking up pet hair.

Comparing Roomba to other brands.

Right now, you won’t be able to buy a brand new Roomba 880 because the Roomba 890 has taken its place. The latter is cheaper if you buy it in Amazon at less than $500!

What’s the difference between the Roomba 880 and 890? The latter now has WiFi connectivity and is compatible with Alexa. Hands down, it’s a better value in my opinion.

Roomba 790 is more expensive than the 890 because it’s being sold by third party seller.

If you ask me a year ago, I would not pick the Roomba 790 over the 880 because of the price difference. But with the 890 available right now for less than $500 it’s a no-brainer option because it’s got WiFi, a smartphone app and Alexa compatibility.

You will get the same navigation as in the 700 series Roombas so expect the same random pattern that will be less efficient than a Neato vacuum. But the great thing about the Roomba 890 is that it comes with a Virtual Lighthouse so it is capable of cleaning multiple rooms.

The 790 is also a good product but if you’re considering it, I’d suggest you get the less expensive 770 or 780. Both will give you the same cleaning performance for at least $70 less.

It does not have the Wireless Command Center but you don’t really need that. The remote included in cheaper variants is enough.

The IR control found both in the 790 and 780 will be more than enough.

Additional virtual lighthouses can be purchased for around $50 in Amazon.

The 770 only comes with a virtual wall so multi-room cleaning is not possible unless you buy the virtual lighthouse.