Author: Garrick Dee Updated: July 21, 2020
Tags: Comparisons, Robot Vacuum
I hope you like the recommended products. Just an F.Y.I., there are affiliate links in this post, and if you click any of those links, I’ll earn a commission.

The 700 series is the fifth generation of iRobot’s successful Roomba product line. Outside aesthetics, the differences are minimal. It all boils down to what comes inside the box. 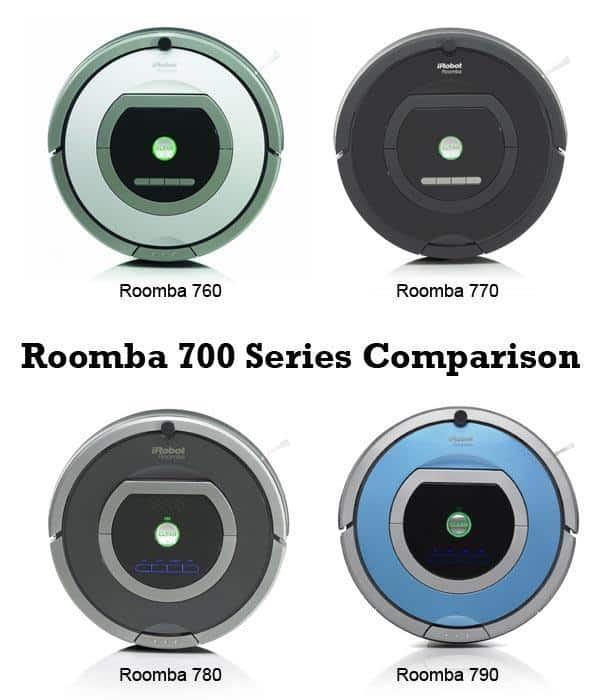 Editor’s note: The 700 series is no longer in production and no longer available in iRobot’s store.

You can check out my other reviews about the Roomba below:

My purpose for this article is to show you in detail the difference in each of the 4 variants here – the 760, 770, 780 and 790 to help you in making an informed decision just in case you’re buying one.

Check the table below so that you’ll have a bird’s eye view on what comes with each Roomba.

For those who don’t know I’ll give you a little history lesson. iRobot named their first robot Roomba, followed by Discovery (or the 400 series), the 500, 600 then 700 series.

Newer variants include the 800 and 900 series. Each of these models shifted to the rubber extractors instead of the bristle / squeegee combo.

All four 700 series robots use the same interface with 5 buttons that also allow scheduling and spot cleaning. Each also comes with the same high efficiency filters that block fine dust particles and the same battery and motor. So run time will roughly be the same.

Biggest difference would be the color.

What’s the difference between a virtual wall and lighthouse?

A virtual wall acts like a physical wall that blocks the path of a Roomba from entering a room or area in your home you don’t want it to enter.

Virtual lighthouses function like a door. Instead of just blocking the path, it will allow the robot to pass through after it gets a signal. The robot fires a signal to the lighthouse after its done cleaning a room.

Having this device allows the robot to clean multiple rooms without too much baby sitting.

Here’s how a virtual lighthouse works in a controlled environment…

The two small areas on the left and right represent the rooms inside your home and the outer area represents the dinning room.

Remember that not all homes with have this simple layout and there are other factors that come into play like furniture and interior layout.

In order to maximize efficiency you’ll have to do your part and remove any loose objects and wires that might get in the way.

A virtual wall acts like you guessed it, a wall. It simply blocks the path of the robot to areas you don’t want it to go to – like the laundry area.

If you want a more detailed explanation, check out this post from Robot Reviews and this one from iRobot.

What’s the difference between an IR and RF remote?

An IR remote needs to have direct line of site in order to work and it has limited range. An RF uses radio frequency that doesn’t need a direct line of site meaning if you’re in the living room and want to turn on the robot that’s in the master’s bedroom, you can do it provided that it’s within range (up to 25 feet).

Which one is the best?

That would depend on your needs and budget.

If you don’t mind not having the RF and the virtual lighthouse, then the Roomba 770 or even the 760 (minus the full bin indicator) would give you the best value for your money as you’ll save a few hundred dollars.

Since you still get the same cleaning capabilities minus the convenience of an RF remote and virtual lighthouse meaning you have to be in the same room to turn on the robot and you’ll have to move it from room to room which to me really isn’t a big issue.

For me, the best value for money would be the Roomba 780 and the 770 depending on whether you will need the virtual lighthouse or not. You will get the same exact robot for at least $100 less.

Both these variants are exactly the same as the 790 – the biggest difference would the be accessories included.