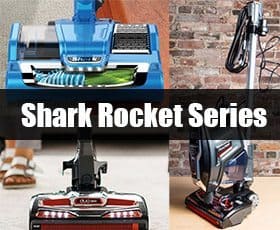 When it comes to deep cleaning, a traditional upright vacuum is the default choice by consumers because of its combination of power and agitation.

The biggest problem is size. For instance, a Bissell 9595A upright weighs 15 pounds. And even with a detachable hose, it wouldn’t be long enough to clean anything over your head.

Lugging this up and down the stairs can put a strain on your back. And while it is cheap, it isn’t as good as a Dyson upright that costs 3 times as much.

Another option is a cordless vacuum but it’s won’t cover as large an area.

Now here lies a dilemma for most consumers

Do I buy a cheap heavy upright that’s a pain in the butt to use? Or buy something cordless and lightweight that’ll only run for 45 minutes max?

The Shark Rocket series is a good compromise between a large, heavy upright and limited run time of a cordless.

It’s light, versatile and yet still retains the power cord so you can still use it to clean the whole house.

Of course having a more compact design will result in a few limitations – the biggest of which is bin size.

But the pros will more than make up for this.

First let’s look at the similarities

With the exception of the NV482, all Rocket variants are stick vacuums that comes with the removable tube that morphs it into a hand vacuum.

It uses the same architecture as the Dyson cordless minus the trigger mechanism.

In its place it uses a slide switch that has two power settings for bare floor and carpet. 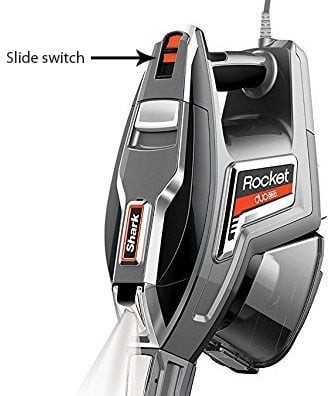 Dirt bin is similar to the Dyson in that it has the same trap door design that relies on gravity to empty dirt. 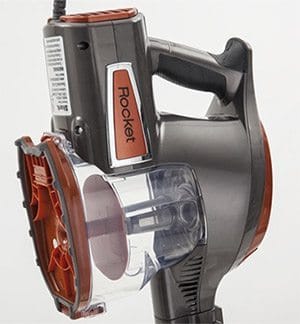 Another similarity is the main floor tool that has its own motor. So agitation isn’t a problem. There will be some variances in terms of brush roll design and LED lights. 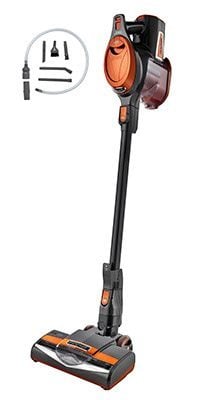 The HV300 series (or Ultra-Light) is the very first product by Shark that utilized Dyson’s concept of interchangeable tools.

In terms of attachments, the HV 302 has the fewest and this includes:

Take note that the pet upholstery tool included here does not have any motorized brush. The main floor tool also doesn’t have any LED headlights.

Ultra-Light has several different variants. The HV302 comes with home and car detail kit while the HV303 has the under appliance wand.

This is also one of the lightest – only 7.6 pounds.

Logan from VacBin compares the Rocket to the Dyson DC44…

Most obvious difference would be weight and build quality. The Shark Rocket is heavier mainly because of the massive floor tool.

It also doesn’t swivel as well, going only a maximum of 45 degrees.

Bottom line: This is a great option for homes that don’t have pets.. It comes with the tools you need to clean most parts of the home. Now if you have an automobile, opt for the HV302 with the car detail kit otherwise go with the HV303 that comes with the under appliance wand.

The next step up would be the HV322. Shark calls this “TruePet” because it comes with a pet tool with a motorized brush.

This tool is much more efficient than the pet tool found in the HV302 because it has a beater bar. If your home has lots of pets, this is a better option because it’ll do the job faster but it’s a bit more expensive.

Here’s the complete list of accessories that you’ll get:

It has the same power (500 watts) as the HV302/303. But this variant has LED headlights in the floor tool. This helps in terms of visibility in cleaning low lighted areas like beds or the living room table.

And like the HV302, it also has the hard floor attachment with mop that looks like the Swiffer.

Bottom line: “TruePet” is the upgrade version of the 300 series with two upgrades. It comes with a mini motorized brush and LED headlights. These upgrades come at a $70 premium but if you have pets this is a very good investment.

The Shark PowerHead (AH452) is most unique of the 5 Rocket variants because the motor and bin are in the same vicinity as the motorized brush.

It has a similar design as the Bissell AirRam.

The absence of a detachable wand limits this vacuum to cleaning just floors. You won’t be able to use this to clean above the floor.

It comes with two types of brushes, each designed for carpet and bare floor. 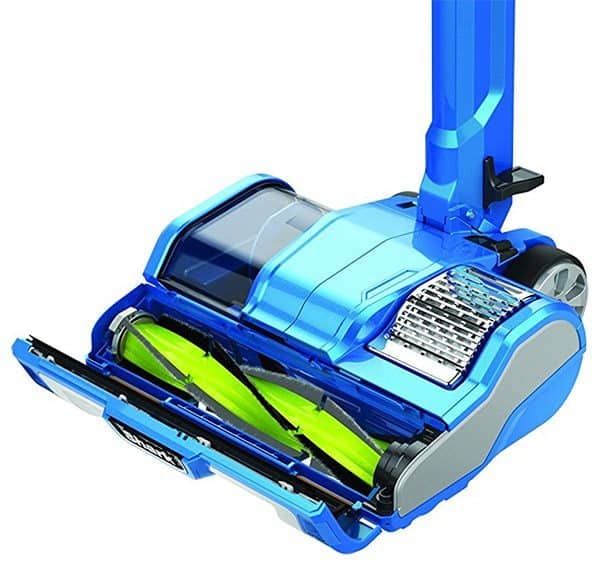 The green beater bar (the one that looks like a squeegee) is for bare floor while the bristled brush (gray) is for carpet.

There is minimal power loss because the motor and brush are side by side.

But cramming the motor, bin and brush in such a cramped area does have its downsides.

The biggest would be the size of the bin. Compared to the other two variants on top of this, it won’t hold as much dirt and you will need to empty it more often.

In terms of pick up it was pretty good. Cleaning a really large mess like this will require frequent trips to the bin.

While it did clean a lot of the dust, it didn’t deep clean as well but for cleaning high traffic areas this is a good option.

Bottom line: This variant is one of the cheapest Rocket variants but also the least versatile because it will only clean floors. It does not have any tools or the detachable wand that will allow it to clean upholstery. If you’re willing to accept this limitation this is a good stick vacuum for small homes.

The Shark DuoClean (HV382) has the latest brush roll technology from Shark. It combines the soft roller head with a bristled brush that work together to clean bare floor and carpet.

This is a new concept that I’ve never seen before. Shark copied the soft roller head first seen in the Dyson V6 (and later the V8) and came up with this unique combo.

Counter rotating brushes isn’t a new concept. I’ve seen it in robotic vacuums like Roomba. But this combo of a soft roller and bristle is unique.

By using a soft roller, Shark was able to expose more of it and increase clearance allowing it to grab dirt, pulling it in towards the suction port. 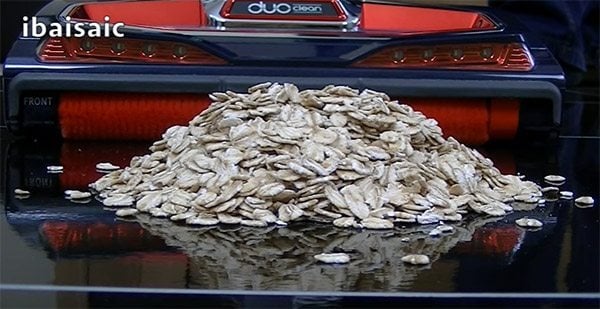 The downside to the twin brush system is weight – it weighs close to 10 pounds! But without the extension wand and floor tool, that goes down to 3.5 pounds. It still is the heavies of the bunch because it has a more powerful 600 watt motor.

Here’s a video of the Duo Clean in action…

Aside from main floor tool, you’ll also get the following:

Between this variant and the TruePet HV322, price difference is minimal. So I’d recommend this over the former because of the more powerful motor and better performing floor tool.

Bottom line: The DuoClean system is double the fun and will outperform any of the other Shark Rocket variants because of its superior agitation. Using the soft roller bar helps prevent dirt from plowing because it has more clearance. This is a great but for homes with pets that need a lightweight stick vacuum to clean high traffic areas.

Just in case you don’t need the floor cleaning capabilities of the other variants here then the HV292 is a good option. 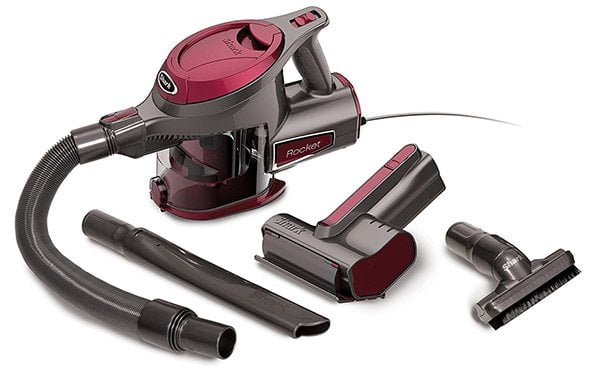 Bin size is just about the same. In terms of functionality this product will be similar to the Dyson V6 Mattress because it has the mini motorized brush in its arsenal. So this is usable on upholstery.

Here are the tools that you’ll get:

Bottom line: This is the only handheld in the Rocket series line. It’s a great option for folks looking for a lightweight handheld with a power cord. The mini motorized brush tool is great for cleaning upholstery and even mattresses. Dare I say this is a good alternative to the V6 Mattress if you don’t mind the cord.

All Rocket series vacuums comes with a 5 year limited warranty from SharkNinja with the exception HV292 (only has 1 year warranty).

All of these products are available in Amazon and it comes with free 2 day shipping if you join Prime (yes, even if it’s a free trial).

The cheapest among the stick vac options would be the Shark DuoClean Rocket that sells for around $200.

Remember that this variant does not have the mini motorized brush or LED headlights so if you have pets avoid this.

The most expensive option would be the top-of-the-line DuoClean that costs a little over $290. A slightly cheaper option is the TruePet HV320 series that costs almost $20 less.

Between these two, I’ll go with the DuoClean because it has superior agitation over the other options.

There you have it a detailed comparison of the 5 Shark Rocket series vacuums that range between $100 and $290.

The best option in my opinion if cost isn’t an issue would be the Shark Rocket DuoClean that costs just a shade under $200. This variant has the best agitation thanks to the DuoClean head and probably more versatile than the Dyson V8.

If your home has carpet and hard floors this is the best option because of the DuoClean head. It’ll be able to pick up small and large debris because the soft roller and bristle brush combo will literally pull in dirt.

Pet owners will also benefit because that same system will also pick up pet hair.

Bargain hunters looking for an affordable stick vacuum option should take a close look at the Shark Rocket Ultra-Light that costs just under $130.

But if the Rocket DuoClen is too expensive then opt for the cheaper Shark Rocket TruePet (HV322). It has the more traditional bristled brush that also works well on both surfaces. However it won’t do as well on large dirt.

If you have any questions please feel free to comment below.