ILIFE A4S vs A6: Comparison, Review and Cleaning Test

Despite being a new brand in this market, ILIFE has done a great job in making quality robotic vacuums that can compete with larger brands such as Samsung, iRobot, and Neato.

And today, we’ll be looking at two of their newest products – the A6 and A4S.

Both these robots have the latest gen-2 brushless motor that will last longer. Another improvement is the larger Li-ion battery that improves run time.

In this review, I’ll go over different features of these products from the exterior, noise, motorized brush all the way to cleaning performance.

Before going on to the rest of the article please watch this video to get a bird’s eye view on what to expect from these two robots. 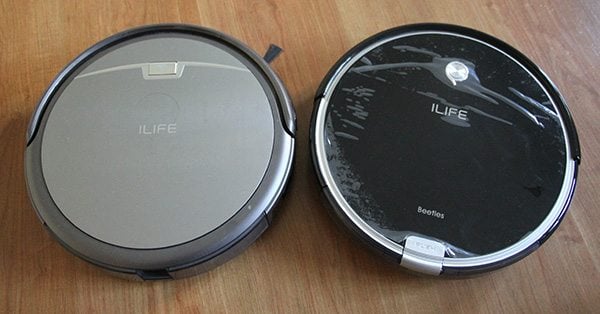 The A6 comes in a sleek piano black finish that is a sharp departure from the different-shades-of-gray color scheme of the A4S.

Honestly, it really looks sharp but my concern is scratching that are magnified on black. But that’s just aesthetic the more important issue would be how this robot cleans.

At the upper middle portion is a single button that engages the default cleaning mode. It also doubles as an indicator that lets you know the status of the battery.

Red also indicates that an error has occurred and you’ll see a full list of error codes and how to resolve it in the manual.

A tray-type dirt bin is accessible through the back of the robot. But you have to be careful how you pick up this and not press the release button or the robot will drop. I’ve made this mistake a few times but thank goodness the robot is not damaged.

The A4S retained the gray color scheme found in the A4. If you look at these two robots side by side you won’t be able to distinguish one from the other.

It also has a single button that toggles the default cleaning mode when pressed. And it also tells you the status of the battery.

Dirt bin is also a tray type bin that slides in the back. But the release lever is in the back part and not on top.

So there is no risk of the robot dropping when you pick it up from the back. 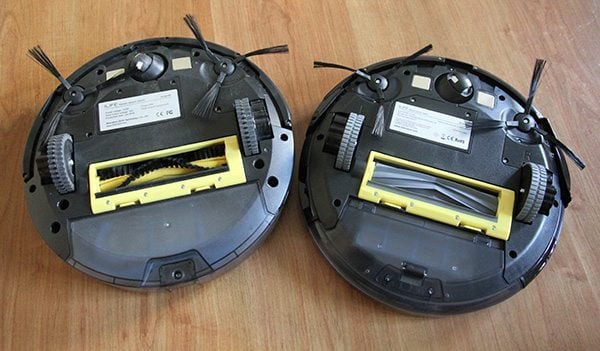 ILIFE retained the same layout in the A6 with the 2 side brushes and one motorized brush at the center. There is a fourth wheel in the A4 at the bottom of the dirt bin that helps create less drag and improve efficiency.

The size of the wheels look similar but the A6 comes fitted with different rubber. If you look closely at the tread pattern, the A6’s are thicker with a center groove.

I don’t think it makes much of a difference on bare floor as both robots move at roughly the same speed.

The biggest difference would be the motorized brush uses rubber flaps instead of bristles to sweep up dirt.

The A4S has the exact same layout as the A4 – two side brushes, bristled brush, and two large rubber wheels. It uses one caster wheel for steering.

Not found in the A4S is the fourth wheel on the dirt bin.

Underneath the bumper are three cliff sensors (A6 also has 3) that prevent this robot from falling from stairs. Unfortunately, these sensors also prevent both these robots from going over the black carpet.

I did say in the video that the A6 is taller than the A4S but I was wrong. 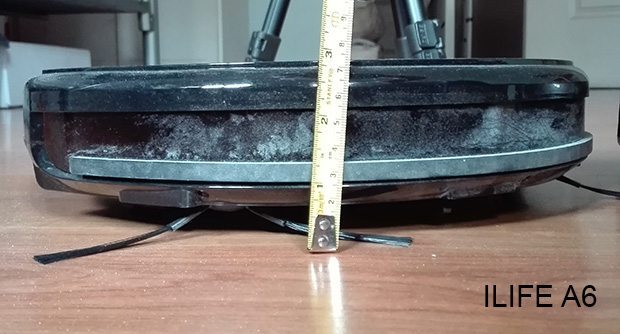 When I was recording the video I could not find the measuring tape so I based it on the eye test.

And the A6 looked taller but when I measured these two, the A6 really is 2.8 inches tall whereas the A4S is slightly over 3” tall. 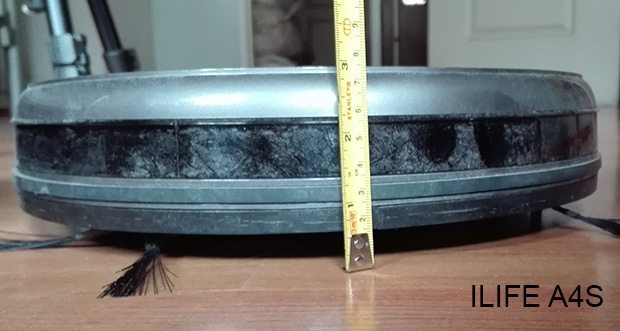 This makes the A6 one of the shortest robotic vacuums available right now. It’s nearly an inch shorter than the Roomba 980 and Neato BotVac Connected. Compared to the Dyson 360 Eye, this thing is a dwarf.

Being short is actually a good thing for a robotic cleaner because it’ll fit under more furniture. 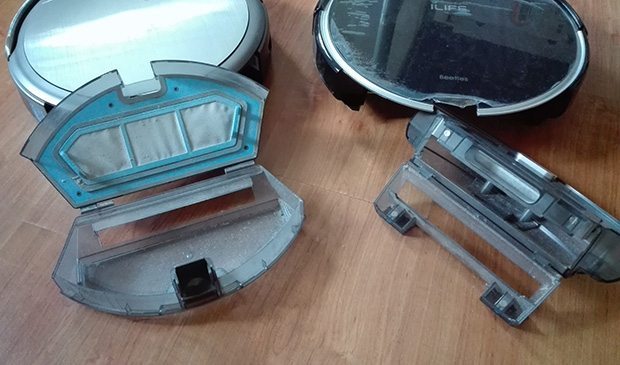 A6 has a redesigned bin that’s smaller than the A4S.

A4S is much easier to empty because of its simpler shape and large opening. 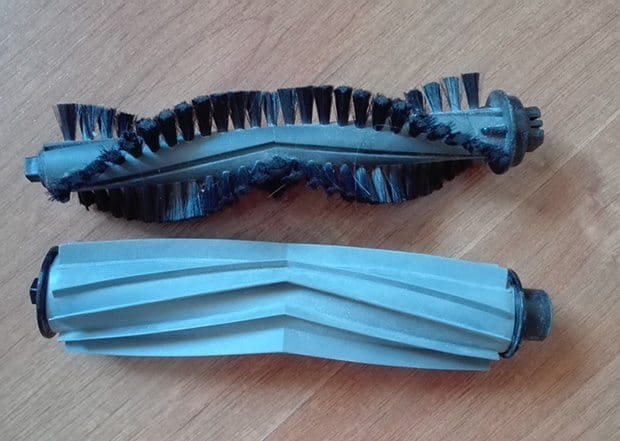 Perhaps the biggest upgrade made by ILIFE in the A6 would be the motorized brush. Gone are the bristles that the previous A series robots used. In its place are rubber flaps that sweep up dirt towards the suction chamber.

In the cleaning test that I did, it didn’t necessarily performed better. But it’s much easier to clean than a bristled brush.

This makes the A6 a much better option if you have companions at home with long hair or have pets.

Not much has changed since the first ILIFE came out. All their robots use an IR based navigation system that tells the robot to go in a random direction.

One improvement worth mentioning would be how these robots handle obstacles. The older ILIFE variants – A4, V5, V5 Pro, V7 and V7S will bump into objects.

ILIFE has improved collision detection in their 2nd generation robots – A4S, A6 and V5S Pro. These robots will slow down and avoid bumping into them thanks to the upgraded sensors and algorithm.

This means less risk of scuff marks on furniture. It’s something that even the Roomba 650 struggles with. And if you’re thinking of buying a 650 why not opt for the A4S or A6 that performs almost as well.

Only the A6 comes with a virtual wall and the A4S does not have this feature.

A virtual wall is a device that blocks the robot from going into areas that are off limits. These may include the laundry area or the garage.

This device is model specific which means you can’t use A6’s virtual wall with the A4S.

My home does not have carpet so I’ll only be testing these on hard floor.

Before I compared these two back to back, I thought that the A6 would perform better because of the new brush roll design but that wasn’t the case.

For both tests I scattered 50 grams of dirt in a similar pattern to replicate how it cleans in several key areas. These include edges, corner and around furniture.

By the way if you haven’t watched the video above, please watch it to see the cleaning test.

Here are some before and after photos of the cleaning test. 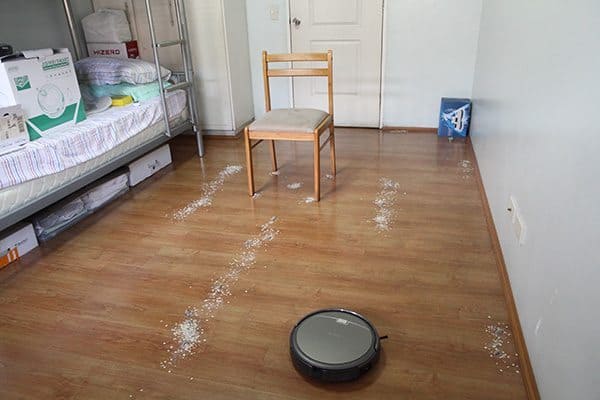 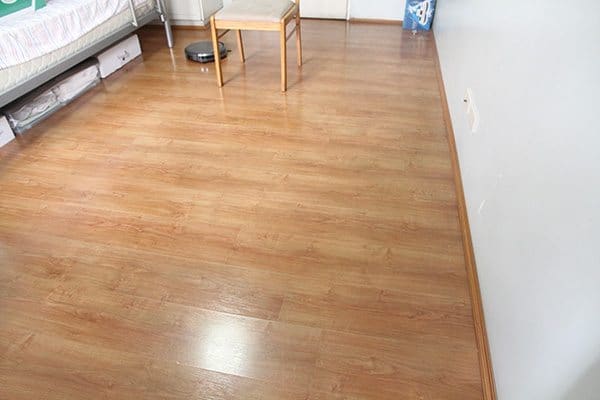 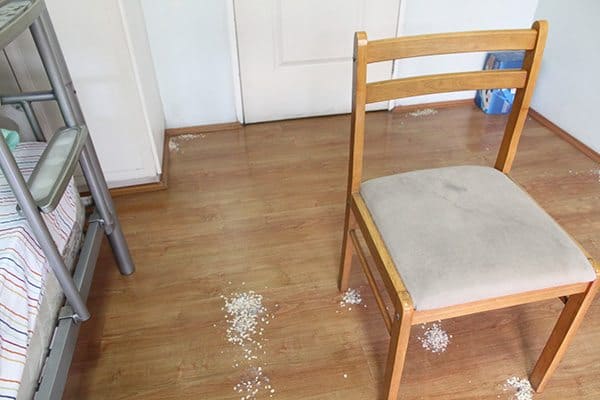 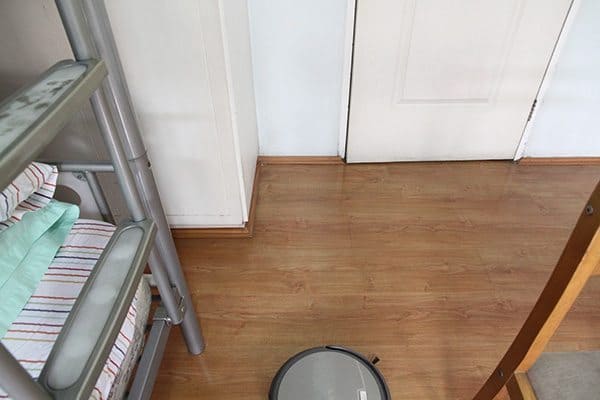 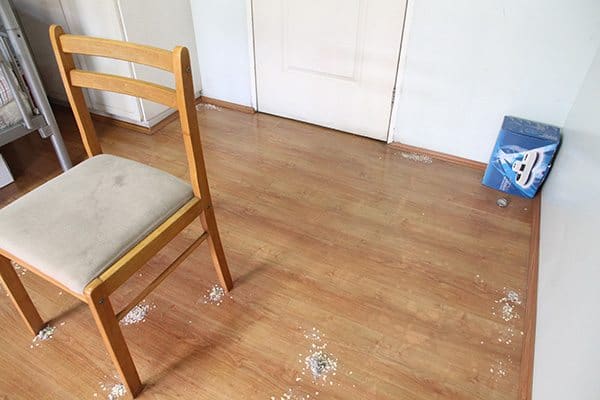 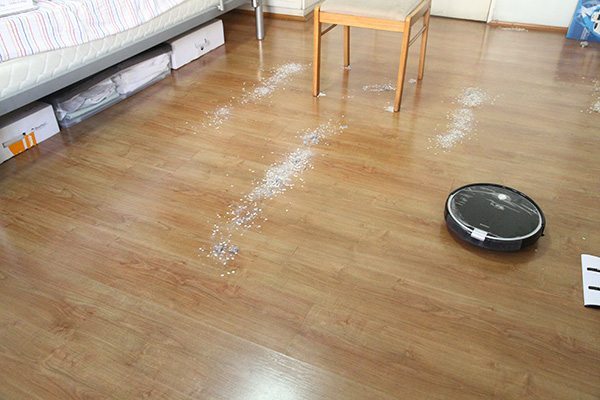 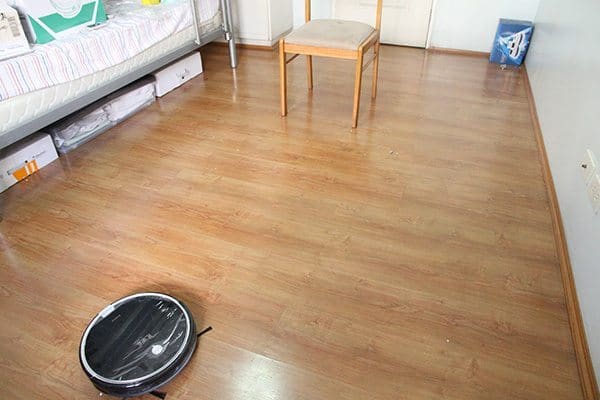 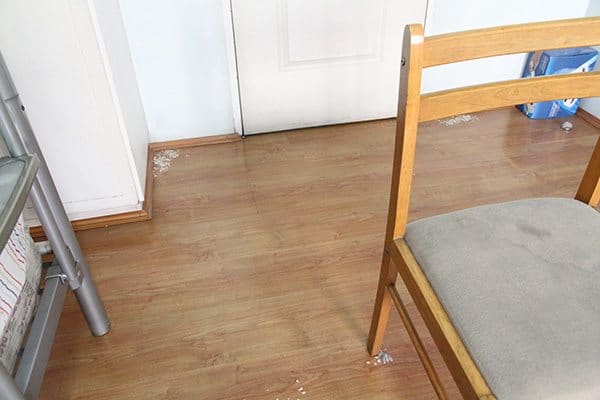 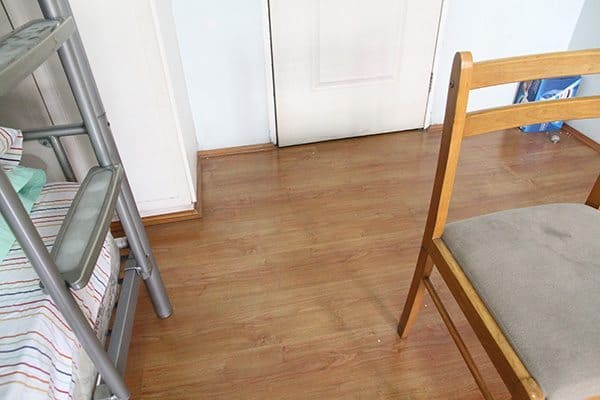 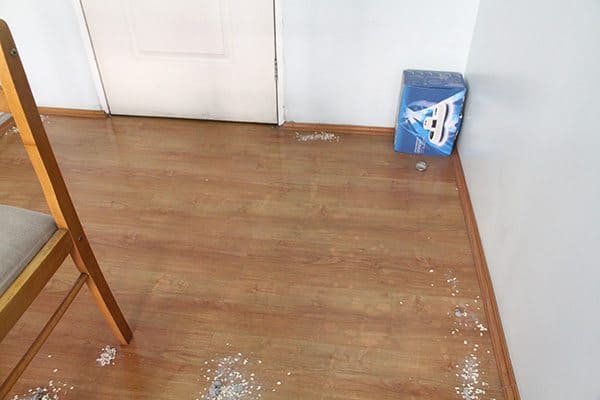 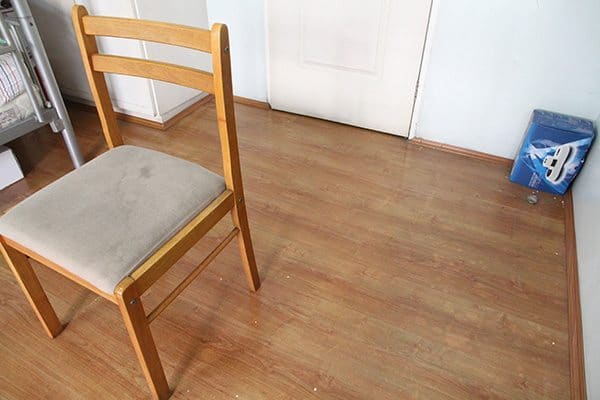 Surprisingly at least for this test the A4S cleaned 1 gram more than the A6 but it took longer for it to clean the area. It took around 10 minutes longer.

So A6 wins when it comes to efficiency but not by much. But it’s still an improvement worth noting.

You’ll notice that the A6 did leave specs of dirt in the middle part of the room. But if I had left it to clean 5 minutes longer, it’ll probably pick those up.

Both did a good job around the chair, edges and corner which is a testament to the effectiveness of the dual side brush system ILIFE uses.

This proves that the BladeAway spiral brush does not pick up better than the bristled brush found in the A4S. But it’s easier to maintain since less hair wraps around the brush.

I’ve mentioned this earlier and I’ll say it again – you buy this because you need something that’s easier to maintain.

If your daughter or wife has long hair, the A6 would be the better choice.

Where to buy this?

You can buy this product from a bunch of different online retailers. But to get the best price you’ll have to go to Amazon or GearBest.

Choosing between these two stores will depend on your personal preference.

The ILIFE A4S will cost roughly $200 in Amazon and the A6 will cost around $220. Take note that prices fluctuate depending on the deals so make sure to check out the links for the latest prices.

Amazon should be your number one option if you live in the United States because of the fast shipping and the option of a quick 2 day delivery with Amazon Prime.

These robots are great options for homes with hard floor or carpet.

Each has a motorized brush to agitate carpet. It is also capable of cleaning large messes on bare floor as you’ve seen in the video.

Don’t expect any of these machines to deep clean carpet because frankly I’ve yet to see such product. But for daily cleanups these are great because these are autonomous. And can clean areas that most uprights or even stick vacuums cannot reach.

One such area would be under your bed and table. These areas are notorious for gathering dust that can be a source of allergens that result in asthma.

In terms of cleaning performance both are a wash. But the A6 is a little more efficient in several cleaning tests I’ve done.

Choosing between the two boil down to two things – how much you’re willing to spend and you need to clean up a lot of hair.

The A6’s new motorized brush does not have any bristles which makes it easier to clean. Hair won’t wrap up as much as in something that has bristles. And it comes with an extra beater bar so you don’t have to buy one when it wears out.

The A4S’s brush works well but if you have lots of pets or members of your family have long hair, quite a lot of hair will wrap around the brush which makes it a pain to clean.

A6 is the latest and the more expensive of the two. But it’s a good investment if you’re willing to spend $200++ for it. A4S is no slouch and the $60 difference is significant.