Samsung PowerBot R9040 Review: Is It Better Than a Roomba or Neato?

In the world of consumer electronics, Samsung stands out.

They are one of the leaders in the world of smartphones and LED TVs. But they also manufacturer refrigerators, air conditioners, dyers and yes, even robotic vacuums. 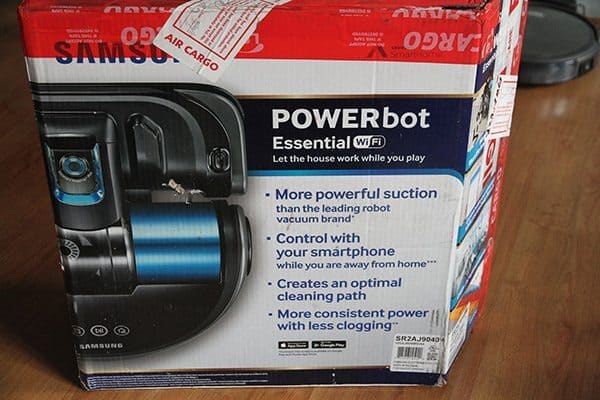 I can say my family and in laws are big Samsung fans.

My brother owns a bunch of them in his home. First he has this big 60 inch flat screen in his bedroom and a smartphone.

Just recently he purchased their robot vacuum – the R9040. And when I found out, I asked him if I could borrow it for a week to test it out.

And here we are with the review.

For Alexa users this is a good option because it is certified to be compatible with it.

It’s one of the reasons why my brother bought it. But is this product better than its competitors like the Neato, Roomba or Xiaomi? Let’s find out.

What to expect from this Alexa compatible robot vacuum?

When I first saw this vacuum, it was huge. Bigger than any robot I’ve ever tested. It’s taller than the Jisiwei and wider than a Xiaomi.

This is both good and bad. Good because the wide cleaning path means it’ll cover more area. Bad because it won’t fit in tight areas and certainly will not go under a lot of furniture.

To give you a glimpse of what to expect from this robot, watch this video… 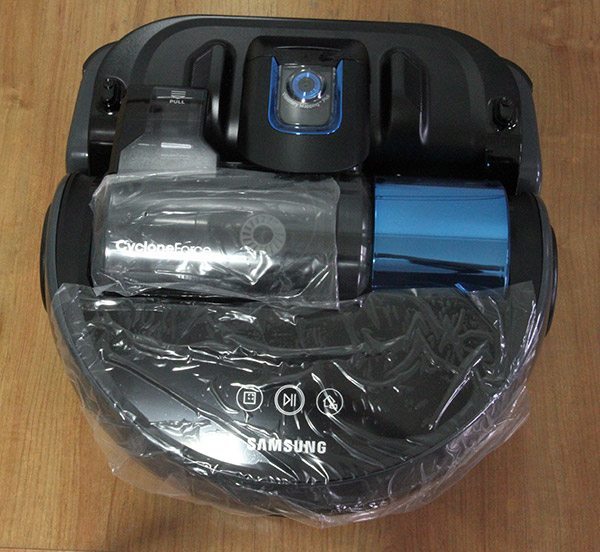 In the middle of the robot you’ll find the motor and dirt bin. It is a big reason why this robot is so big.

The bin is one of the biggest in this industry and will hold a lot of dirt. It easy dwarfs dirt bins of other brands. 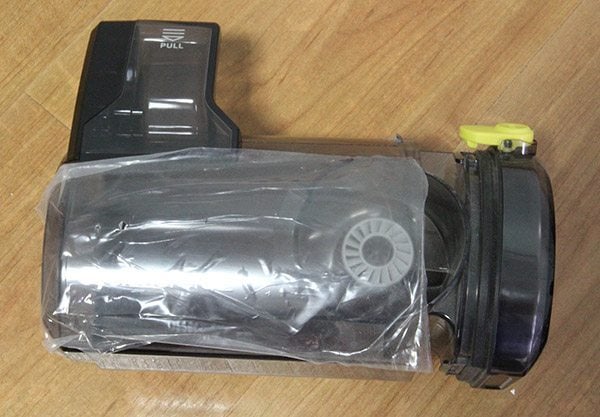 Inside it is a cyclonic filter that keeps fine dust away from the filter one the side.

The filter itself is washable but Samsung did not specify if this is a HEPA filter or not.

It also has an all LED interface with 3 buttons at the button. Since it uses bright LED, it is clear and it shows all the information about the robot from battery status, WiFi to the error code. 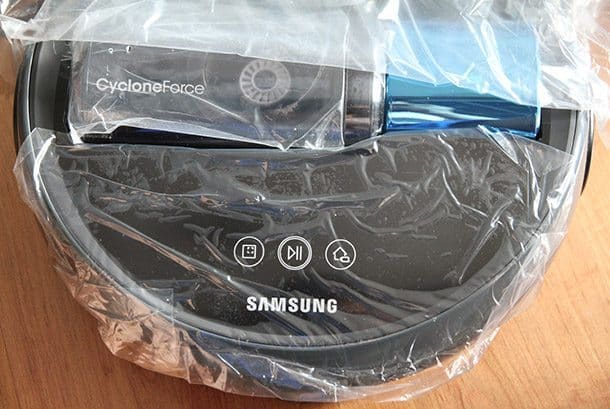 For error codes, you’ll have to refer to the manual to see what went wrong and how to address it. 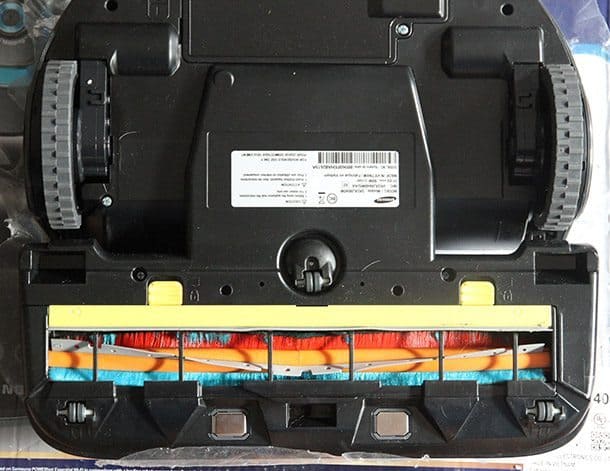 To see how big this robot is, you need to flip it over.

It needs 6 wheels to support its massive frame.

Another thing I noticed is that the lack of a side brush that hampers it somewhat when cleaning the corners.

In a number of cleaning tests I’ve done, it did not clean the edges as well as the ILIFE robots I’ve tested.

This means that it will miss areas at the edge completely. This is a big reason why Neato had to add a side brush in their BotVac series even with the beater bar really close to the edge.

But it has a wide motorized brush that measures 12.24 inches. It’s almost as wide as the Neato’s brush.

The wide brush does help it cover more ground with less passes.

Samsung says that this robot has the “Visionary FullView Sensor” that creates an optimal cleaning path. To demonstrate this feature, check out this video…

At first glance you’d think it has a similar navigation as the Roomba 980 – predictable back and forth pattern.

It’s definitely an improvement over the Roomba 800 and 700 series. But it lacks the SLAM algorithm so it lacks intelligence and will just run until battery runs low.

This is one of a handful of robot cleaners right now that has WiFi connectivity and a smartphone app.

Connecting the app and robot is a fairly straight forward process.

Search for the “Samsung Smart Home” app. Next step would be registering for a free account then logging in. 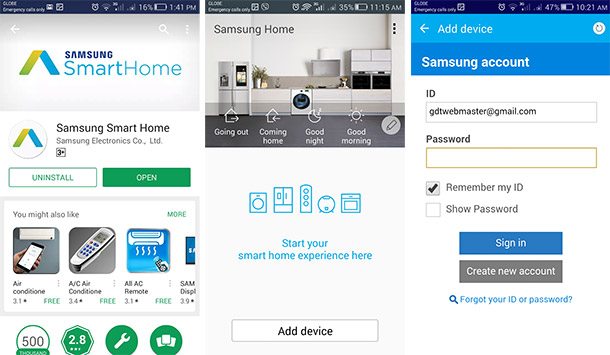 Take note that you can use the Samsung app in various other Samsung devices not just this robot so if you’re a loyal customer this is a huge plus.

After logging in search for “robot vacuum” in the list and have the remote ready to make the virtual connection.

When the app detects the robot, it’s time to connect to your home’s WiFi network, enter the password and rest is self-explanatory. 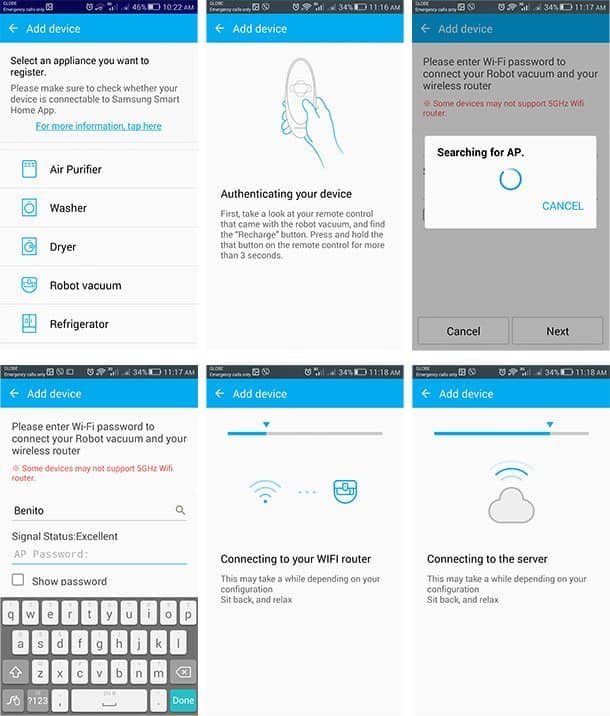 You can’t use the app without the router.

In terms of features, the app is pretty bare. It allows you to start/stop the robot, schedule and check battery status. That’s about it. It won’t show the location of the robot or if the bin is full. 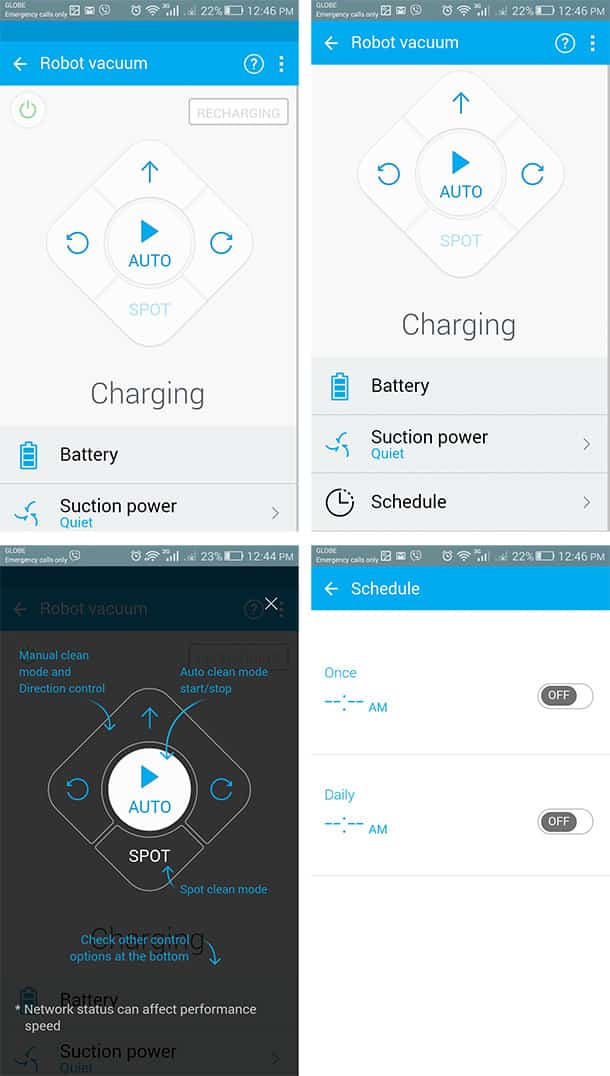 From a brand like Samsung know for electronics, this is a letdown to be honest.

Right now I’ve only tested this robot on bare floor and performance was decent but not great. The lack of a side brush does hurt it a bit when cleaning corners because there are gaps in both sides.

If you’ve watched in the first cleaning test I did, it was able to clean around 46 out of the 50 grams of dirt I scattered on the floor.

Subsequent tests produced close to the same results give or take a few grams.

One thing I noticed is that it had a slight tendency to plow dirt because it has two wheels in front of the motorized brush. But it’ll only be an issue of your cleaning large clumps of dirt like such as this. 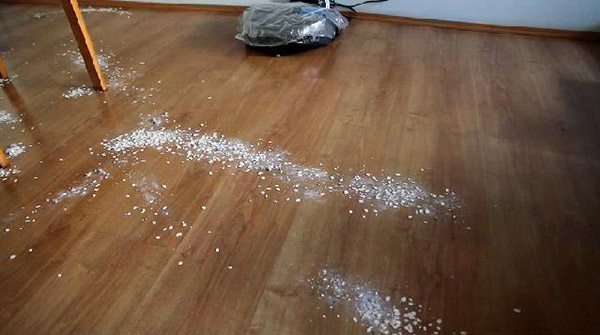 After running the robot close to an hour, it did a pretty decent job. 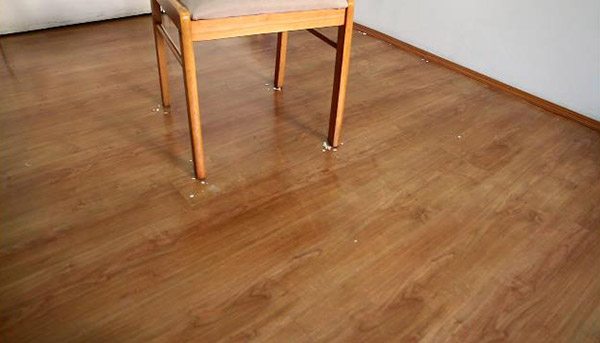 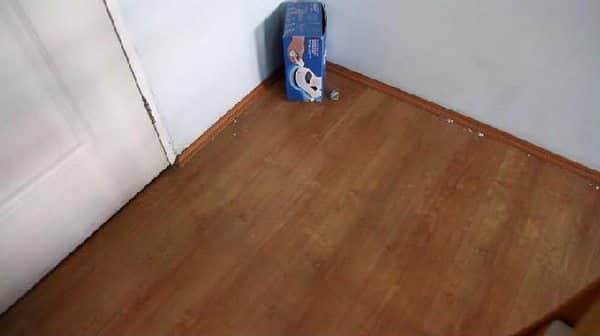 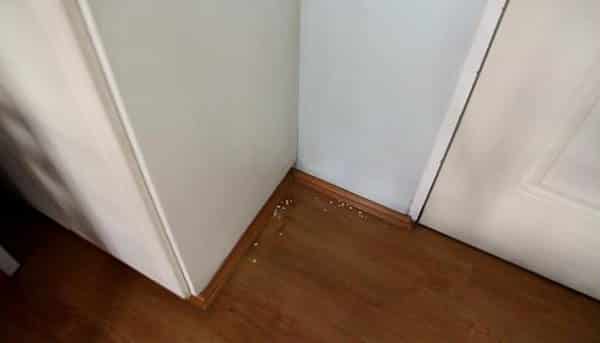 One of the biggest struggles for this robot would be cleaning corners and edges because it does not have any side brush.

For every day cleaning it shouldn’t be an issue.

Unfortunately I did not have enough time to test this on carpet but based on the reviews I’ve read, it will struggle cleaning fine powder on carpet.

Another issue would be not going over black carpet. If your home has rugs that are black or parts of it are black, this robot will not go over those areas.

That’s because of the cliff sensors. If it sees anything black, it will stop, backup and go in another direction.

You can buy this in Amazon for less than $550 and it’ll be eligible for the 2-day shipping if you join Prime. Amazon also offers extended warranties up of up to 3 years if you want that extra peace of mind.

Buying this direct from Samsung would be around $100 more expensive.

At first glance, the PowerBot R9040 looks impressive with its camera based navigation and ultra-wide motorized brush that dwarfs the competition. But when you dig deeper, there are some flaws that hinder it from competing against the likes or Roomba and Neato.

Why the Samsung lags behind the Roomba and Neato

First would be navigation. When I saw “Visionary Mapping”, I expected it to be as smart as the Roomba 980 but it isn’t. While it’s better than ILIFE and the Roomba 800 series in that it has a more predictable pattern, it will just run until battery is low.

It has a slightly better navigation compared to the Roomba 860 but only more expensive.

Tall for a robot vacuum

Plus it’s over 5″ tall which means it will struggle going under a lot of furniture. This is an absolute must for any robot vacuum because it goes where most uprights or even canisters can’t. It’s also a big reason why the Dyson 360 Eye didn’t do as well as they’d hoped.

It does however have a decent sized bin and a washable filter. So won’t need to empty this as often and it is easy to empty.

Also the lack of a side brush hurts it when cleaning corners because the motorized brush has gaps on both sides.

App isn’t as good as I hope

The app is also a disappointment. It has only basic functionality – check battery status, schedule, manually control the robot and turn on/off.

Xiaomi has a much better app and $150 cheaper.

At $500, it’s hard to recommend this product with other cheaper options available like Xiaomi and ILIFE. If you don’t mind spending more, I’d go with the Roomba 960 that’s $200 more or the BotVac D5 for around the same price.

Both will have better performance and run longer.