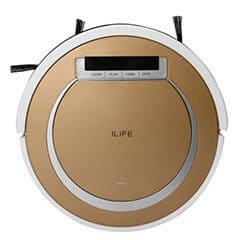 If you are a consumer the last 4+ years has been very exciting.

Roomba added WiFi connectivity, Neato now has a side brush, Dyson finally made the Dyson 360 Eye available to the U.S. market after much anticipation and we now have access to sub $200 robotic vacuums thanks to ILIFE.

ILIFE is one of many Chinese brands popping out of the scene trying to get a slice of this growing market.

I’ve tested several brands like Jisiwei and Alfawise to name a few and this brand is currently the best of the bunch in terms of value and performance.

It currently has 9 variants in their ever expanding product line.

The ILIFE X5 is designed to be a barefloor cleaner with both vacuum and wet mopping functionality thanks to a water tank that slowly drips water onto a microfiber towel that can be attached underneath the vacuum.

What to expect from the ILIFE X5?

At first glance the ILIFE X5 looks similar the Roomba 700 series – at least with how the controls are laid out but when you flip it over you will notice it is very different starting with the vacuum inlet is located.

This variant does not have any motorized brush, it only relies on pure suction plus the dual side brushes to funnel dirt right into the vacuum opening then suction takes over.

So in essence this robot will only work on bare floor surfaces like linoleum, hardwood and tile. It does not produce too much suction with just 19 watts on tap but the great news is that it isn’t very noisy.

Out of the package you will get… 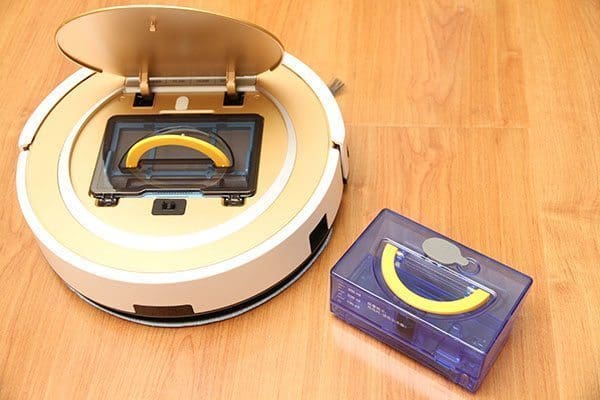 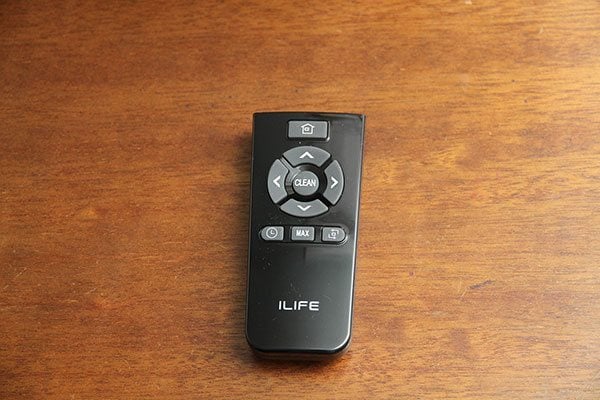 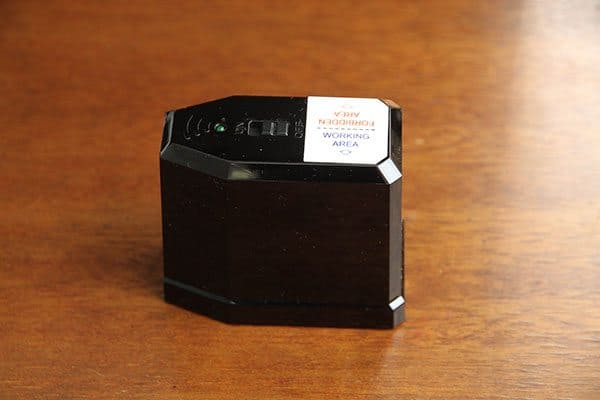 If you look closely at the water tank, it does not have any opening aside from the two small holes at the bottom which functions by slowly dripping water when the mopping program is turned on. Trickles of water slowly drip onto the microfiber towel at the base.

The downside is with only 300ml of water capacity so it will not cover a large area.

Other features of the X5 are pretty standard when – rubberized wheels, two side brushes, remote control and a virtual wall.

There are two ways to control this robot, one through the four buttons on top of the robot vacuum itself and the remote control. 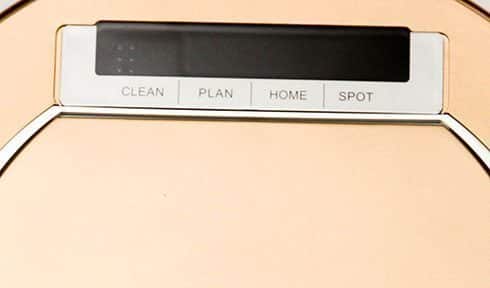 But it isn’t straight forward as you think it is, there are some quirks that you will have to learn first before using this.

First quirk is you always need to press the “clean” button first before you can use the edge cleaning or the spot cleaning. There is not spot cleaning option on the remote control, only on the robots interface.

You will also need to press “clean” first before you’re able to direct the robot using the arrow buttons.

Here’s another quirk, you can only use the left and right buttons if you want to use the RC feature and every time you change direction, it turns at a 45 degree angle.

The up and down arrows are reserved for scheduling.

Another quirk would be the scheduling feature, when you’re setting the minutes, you can only do so through 15 second increments.

You could say that it goes in a random direction similar to an iRobot but the difference is it does not bump into objects hard.

I noticed that it alternates between going in a crisscross direction and edge cleaning so I’d use this, I’d just press the clean button and let it do the work. 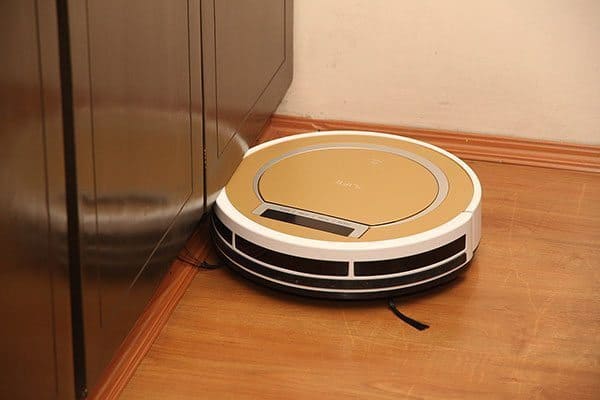 In our master’s bedroom it still got wedged under the overhang.

Good thing someone spotted it and gave it a bit of a nudge and it resumed cleaning.

ILIFE does not specify if this robot is able to clean multiple rooms but in my testing as long as you leave your doors open it will go in another room.

The somewhat random cleaning pattern means that it will miss some spots here and there.

As far as edge cleaning is concerned, I’d say the X5 scores pretty high marks because it really hugs the walls.

To ensure that this robot does its job well, make sure that you tidy up and remove any loose wires, toys and if possible remove chairs so that the robot will be able to clean as much area as possible.

When placing the docking station be sure to tuck away the wire (or taped on the wall) because this is a possible tangle point for the robot.

The biggest trouble spot would be in-between the chairs legs if it is narrow enough.

To prevent this, I suggest you remove all the chairs or space them out as far as possible.

If you have bunk beds with legs like this, you may want to remove them first or else… 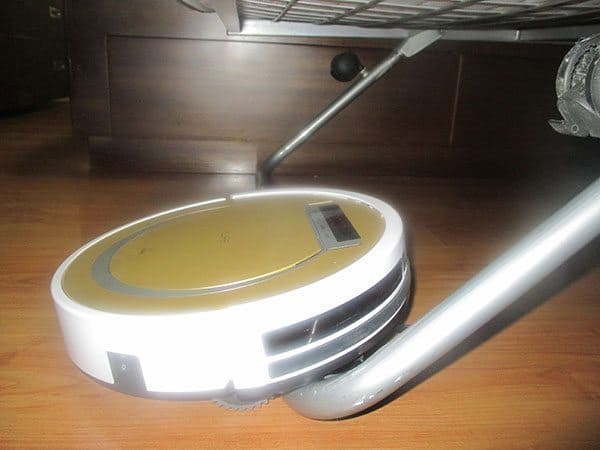 This is where the climbing capabilities of the X5 are at a disadvantage. It has enough clearance to go over the initial hurdle but the wheels aren’t big enough to clear the leg. FYI: the diameter is a little over an inch thick.

I tested this robot on the second floor of our home that consisted of two rooms and a hallway. It was able to clean all rooms but it did miss some spots.

When the battery was low it was able to find the charging base on its own.

Even if it can clean multiple rooms, I’d recommend deploying this one room at a time to increase efficiency and miss less spots. 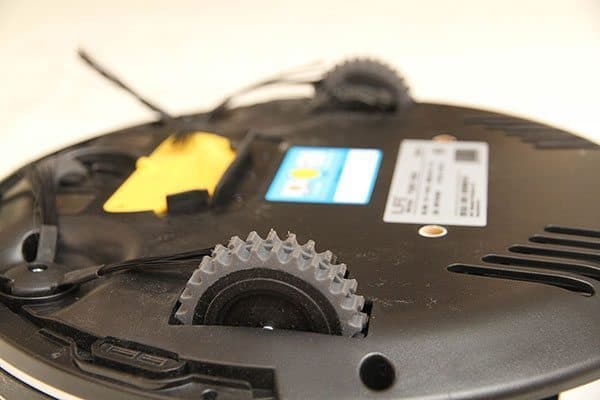 Climbing shouldn’t be a problem because it has rubber wheels that provide good traction.

In one of our rooms the robot was able to climb over a rubber mat that’s close to an inch.

The first time I ran this robot, I used it on the second floor of our home. Our home isn’t particularly huge – only 40 square meters.

This is how much dirt it was able to pick up after 45 minutes of use. 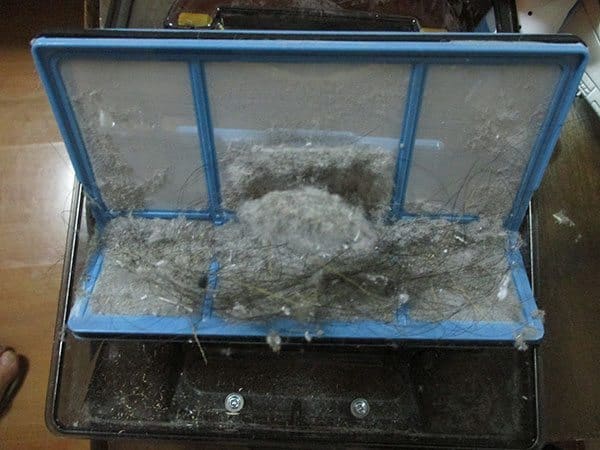 You will notice around the vacuum opening are rubber flaps or squeegees that serve as a funnel to make sure that dirt, dust and debris will go inside the dirt bin. 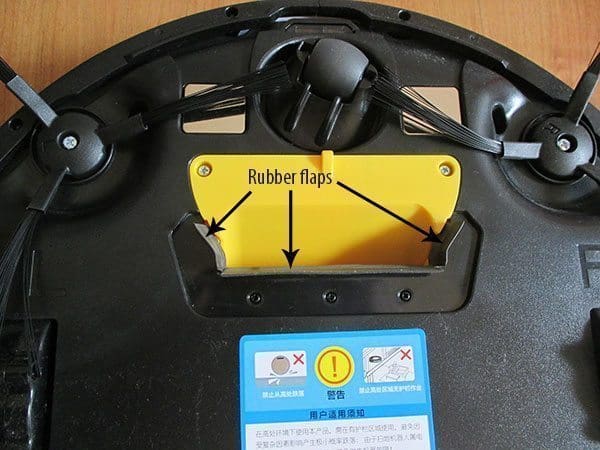 The narrow opening though weakens the cleaning efficiency because it will need more time to clean a room.

Switching to mop mode is pretty straight forward – just remove the bin and attach the water tank in its place.

Once the robot detects the water tank, it shuts down the vacuum motor but the side brushes would still spin.

Make sure not to go over the max fill line to avoid water spilling over the sensitive electronic parts.

There are holes underneath the water tank and it will drip so be careful when placing it inside the robot.

In terms of the moping feature, it is a pretty useful tool in mopping a relatively clean surface. You wouldn’t want to use this on a dirty or oily floor. 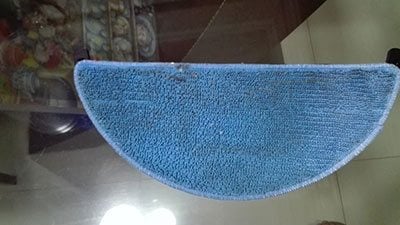 If there’s one complaint that I have – it is the size of the opening where you fill it up, it is pretty small.

Someone requested that I create a video about the X5 cleaning stains.

One thing I noticed is the water tank relies on gravity for the water to drip down.

It does not have any mechanism that will regulate water flow.

So when you plan on using the mopping feature make sure to turn on the robot as soon as possible.

Leaving the water tank inside the robot would create a big puddle of mess and may damage the robot.

Here’s the before and after photo… 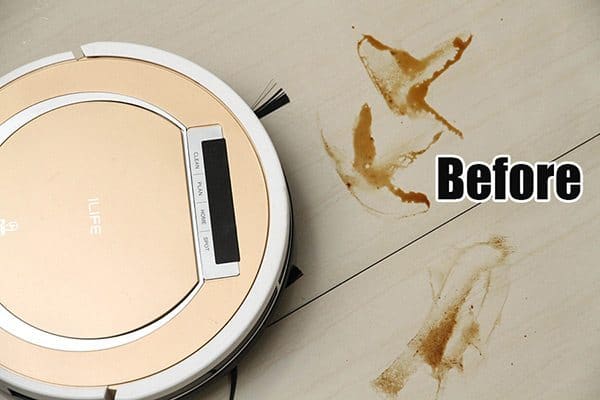 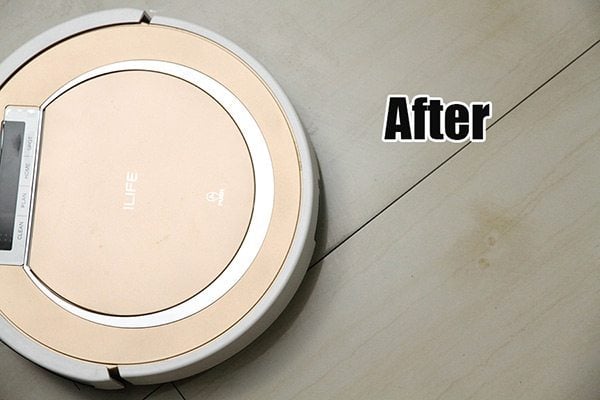 It isn’t completely spotless but for the crudeness or simplicity of how it goes about doing it’s business, it is pretty good.

If you’re O.C. about your floors, you may not like a robot to do the mopping for you because you’ll do a better job yourself but for jobs like this. It does the job.

Instead of being able to set the exact time of the day, you will need to do a bit of math.

Let’s say you set it at 6:00, it will not clean at 6 am. Instead it will start cleaning 6 hours after and will clean at the same time on subsequent days.

Some notes on the charging dock

If you’re using this for the first time, the easiest way to charge this robot is to press the home on the remote control and the robot will dock itself on the charging base automatically.

It will take roughly 5 hours to full charge.

Make sure to clear at least 1 meter of space on the left and right of the dock and at least 2 meters in front for the robot to dock properly every time it runs.

Lastly rest the charging station against a wall so when the robot docks, it will not move around.

Another way to charge the robot vacuum is the directly plug with the outlet.

Make sure to turn on the power switch on the side of the robot before starting.

Even on max power, the X5 I tested was able to run for about an hour and a half before going back to the charging base.

The X5 isn’t available for sale in Amazon but you can purchase it from GearBest. To check the latest prices, click on any of the links below.

I’ve also included some coupon codes shared to me by GearBest for even more savings.

The ILIFE X5 is a great alternative to more expensive brands like Roomba and Neato if you have a home that only has bare floor. It has a low profile that it will fit under most furniture and overhangs.

After using it for several days, I think this is a good everyday tool you can use to keep dust and dirt from piling up on your floors. Just make sure to tidy up those wires and other loose items on the floor.

While there are some quirks in terms of scheduling and using the other features, it is still a pretty good product considering the price point. It will clean your room and go back to its charging base when the battery is low.

It isn’t very noise as I was still able to have a decent conversation while the robot was running at max power.

Despite the lack of premium features found in other brands like Dyson or Neato, the X5 was a very good performer considering the cost.

For a budget robotic vacuum, it has good navigation that won’t bump hard into furniture and will clean almost everything scattered on bare floor.