Jisiwei I3 Smart Robotic Vacuum Review: A Robot Cleaner with a Camera! 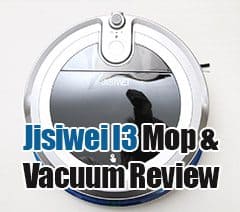 A number of robot vacuums in the market right now use a camera as part of their navigation system.

High-end robots like the Dyson 360, iClebo YCR-M0-10 and Roomba 980 use a top mounted camera for navigation. But this is the first robot to use a camera as a CCTV.

That’s the unique selling point of the Jisiwei I3. It helps secure your home through the built in CCTV camera and it even has a motion detect system that sends a message through the app if it detects any movement.

Disclaimer: I got this product from GearBest in exchange for an honest review but I did have to pay for the shipping cost and tax so I didn’t exactly get this robot for free. As with all my reviews, I’ll be objective and tell you the good points as well as the bad.

Underneath it has the same layout as the ILIFE X5. It has two side brushes and a narrow opening where dirt goes in. The I3 does not have any motorized brush so this will work only on bare floor. It also comes with a microfiber mop to mop floors.

The biggest difference is the location of the water tank. The I3’s water tank is built-in the bracket so if you can use this to wet mop and vacuum simultaneously.

Like the ILIFE this robot comes with a 2,200 mAH lithium ion battery that Jisiwei claims will run for 2 hours which equates to cleaning 200 square meters.

What to expect from this WiFi enabled, cloud based and CCTV equipped robot?

The I3 is unique because it has one feature not found in a lot of robot vacuums.

When you look at the feature set, you’d think you’re looking at a brochure of a CCTV camera but it’s actually a robot that actually vacuums and mops your home.

A couple features I like is the CCTV and smartphone app that controls it remotely.

Of these two, the CCTV really catched my attention because I’m a tech nerd.

Connecting to the Jisiwei App

However that excited turned to disappointment as I failed to connect the app and the robot the first time I tried (without having the manual with me).

There are three ways to connect to the robot according to the manual, why so many options only the app programmers can answer but I found it rather confusing.

Frustrated, I the third option which is the manual link wherein you disconnect the router’s WiFi and connect it to the robot’s WiFi – again, it wasn’t successful.

So what I did was connect to the robot’s WiFi, open the app and then use the “Sonic Link” which was successful.

I also had to restart the app several times to get the connection.

Unfortunately though, the app was not stable at all. Several times during my tests the connection between app and robot disconnected.

It could be the cloud system that Jisiwei uses but whatever they used, it wasn’t stable.

Also the app crashed several times and I had to restart my phone to use it because it opens the WiFi option when I tried to open it.

Here’s the main interface of the app. It had the standard auto clean button and directional buttons but it was lacking in options. 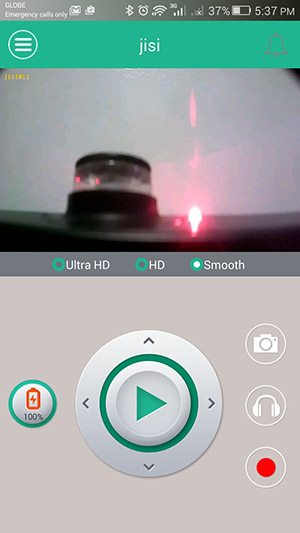 You can record videos while the robot is cleaning and snap photos but that’s about it.

It lacks the options found on the remote. This includes the spot cleaning option, boost mode and scheduling.

The last option was a big omission for me was the scheduling feature. Any autonomous cleaner with WiFi connectivity should have this feature.

If you look at Google play, this app has a very low rating and this in a nutshell is why.

The variant I got has a combination gray, back, white and blue color which I think is nice because it isn’t prone to stains as it would a product that has a white finish like the Xiaomi. 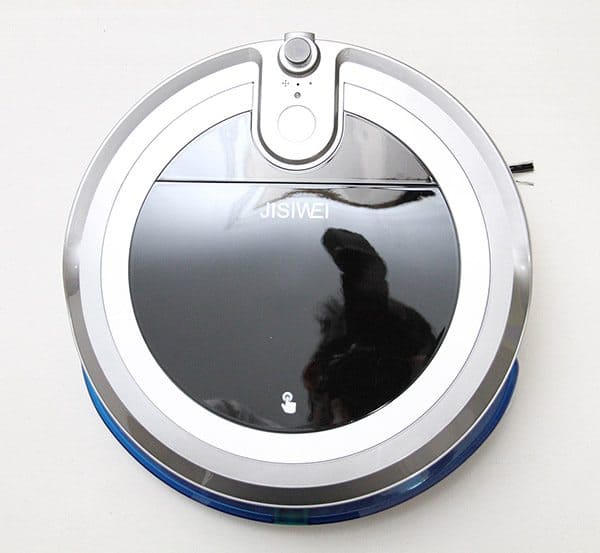 Opening the top door reveals the dirt bin that holds an impressive 600ml that doubles the capacity of the ILIFE X5. 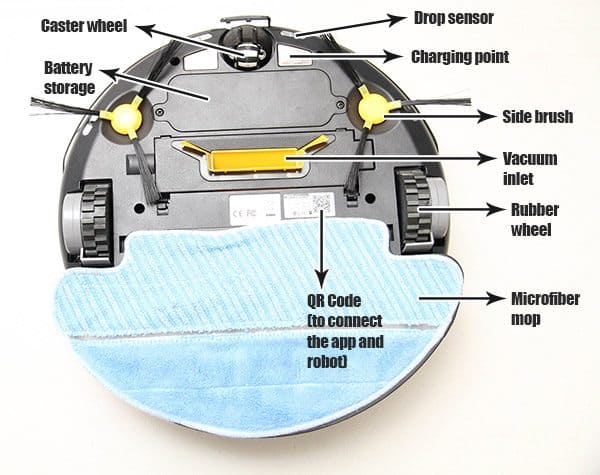 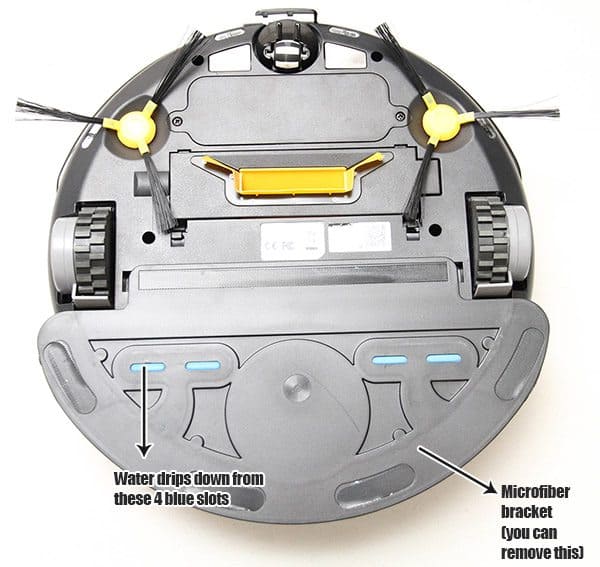 This is another similarity with the ILIFE X5 both of these machines also come with a mop attachment that allows you to use it to mop and vacuum.

Biggest difference would be the I3’s bracket has storage for water – a big reason why it’s so bulky.

This also allows it to vacuum and wet mop at the same time. 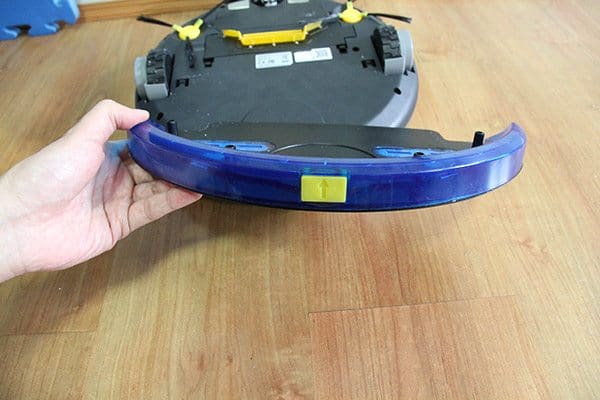 It will hold much less water though – only around 120ml. 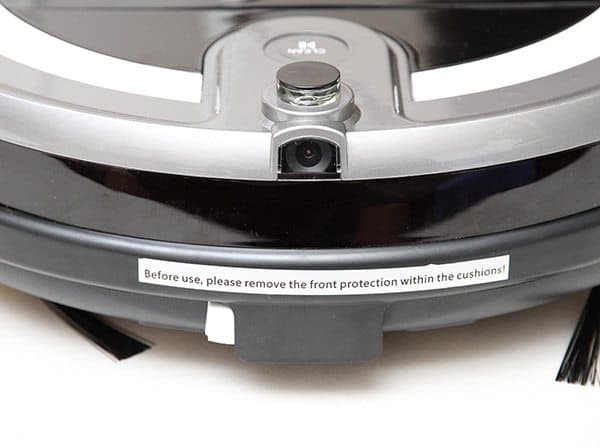 At the front of the robot is a 1 Mega Pixel lens with 120 degree wide angle view. Here are a few screen shots of it… 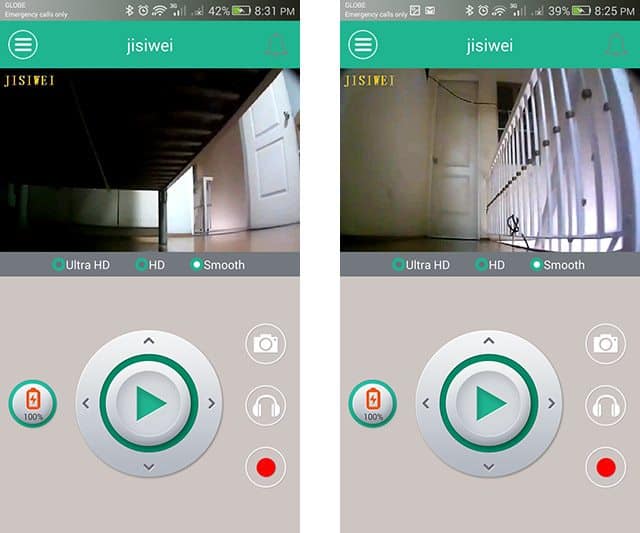 This camera has a motion-detect system, video recording and image capture.

To access the motion detect feature, you’ll need to go to this part of the app… 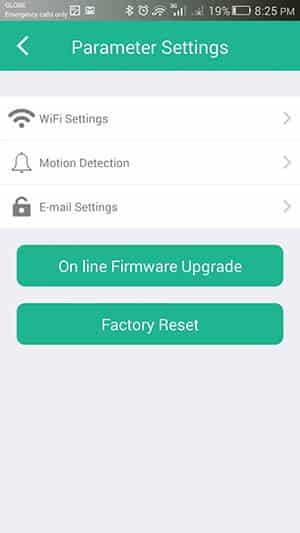 It gives you 3 sensitivity options. It does work but the downside is camera placement which is facing the dock and away from potential intruders.

The Jisiwei I3 doesn’t have any motorized brush, only a narrow opening underneath that make this suitable for bare floor only. 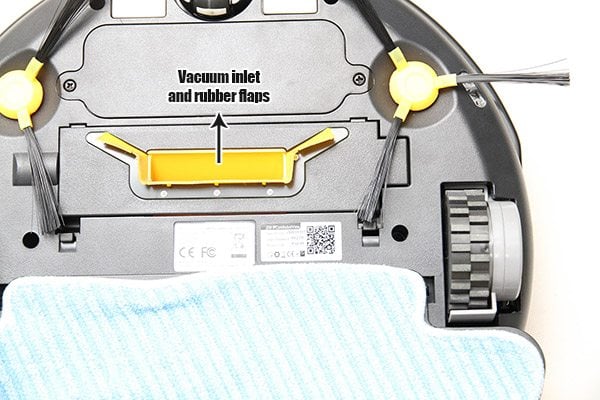 On the sides and rear of this inlet are rubber flaps that ensure that dirt will not go past.

This design is similar to the ILIFE X5 but the X5 has a larger opening than this.

The bin of the I3 is very similar to the X5 in terms of design but it doubles when you talk about capacity – 300ml vs 600ml. 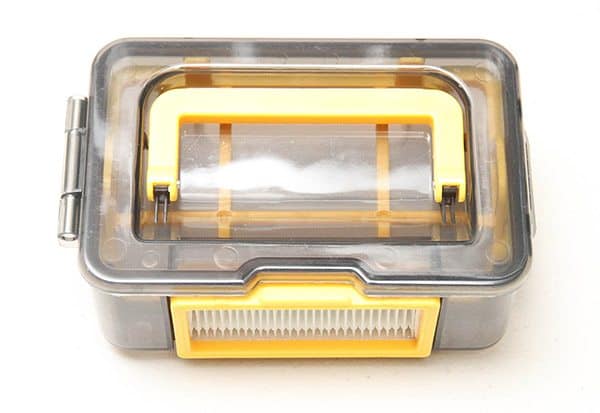 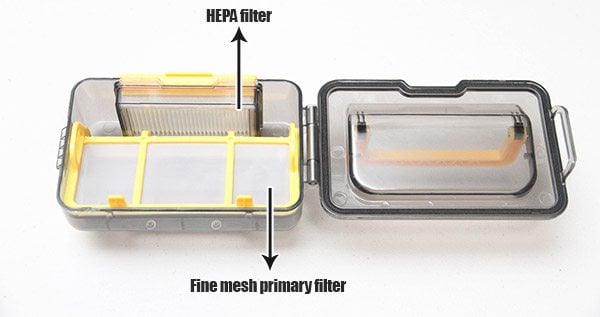 It has the same mesh filter that covers the HEPA filter. Even if the manual says it’s washable, I’d avoid doing so because water can damage it.

If you have a vacuum that has soft bristles that could suck up the microscopic dust trapped on the HEPA, that would be a better option. 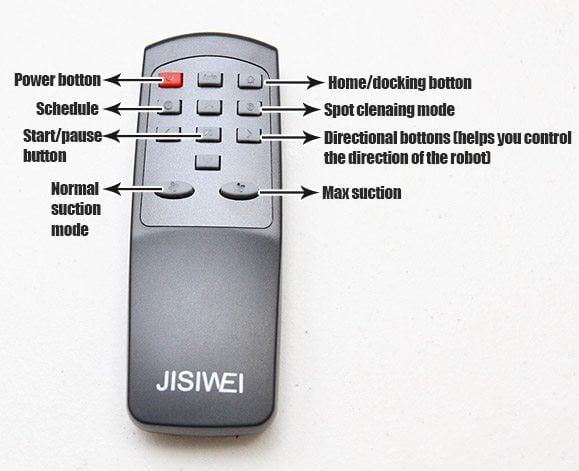 The functions worth noting here are the max function that increases suction to its maximum, spot cleaning mode and schedule.

Even if the I3 has several cleaning modes, only spot cleaning is available on demand through the remote.

The schedule is an interesting function, it does not permit you to schedule the specific time you want it to clean. When you press the schedule button the robot will clean 2 hours after.

Before anything else, watch this video of the big mess test I did. The mess consists of laundry detergent powder, rolled oats and some cut paper…

Despite the random cleaning pattern that this robot has, it was able to clean up most of the mess I laid out.

Here’s the before photo… 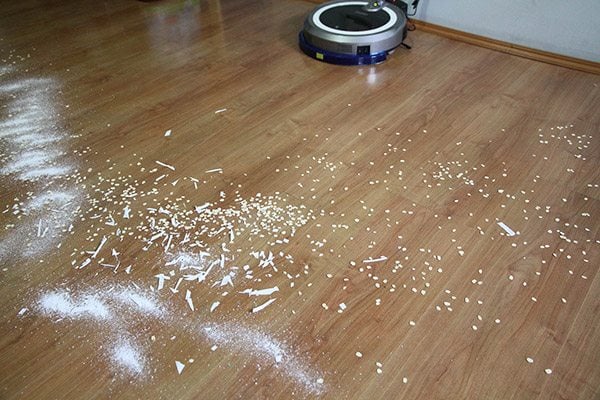 I sprinkled a lot of detergent powder and really want to test out its capabilities in terms of cleaning a mess this big.

Under normal circumstances, you don’t want to use a robot on a mess this big but it’s a good litmus test to see how it does.

I originally wanted to use powder but I couldn’t find any so I settled with detergent powder – it was close.

Here are the after photos when I paused the video… 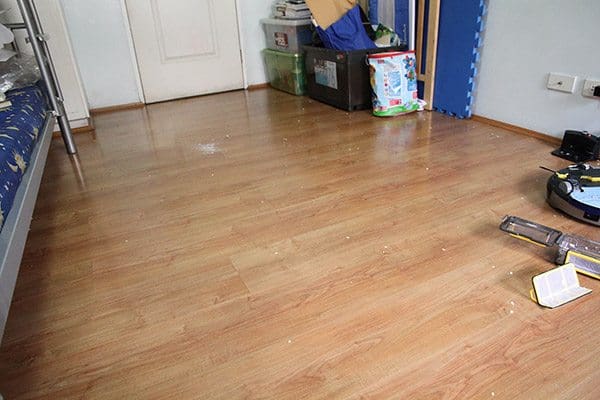 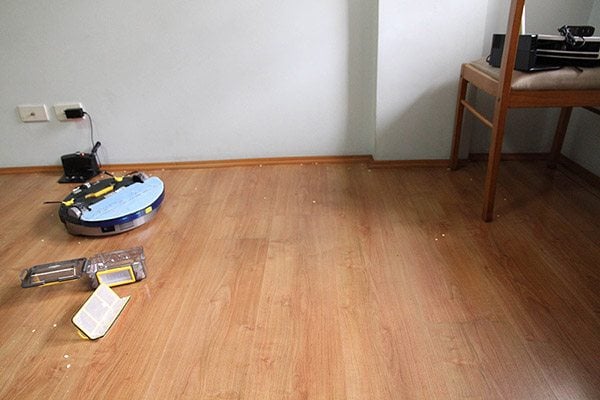 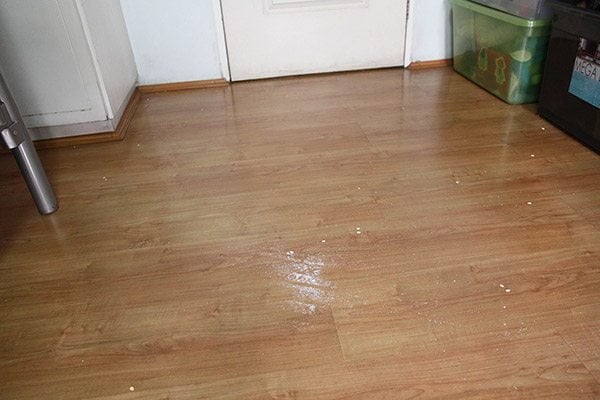 There were still stray pieces of oats and detergent but it was taking too long and I didn’t want to bore my audience with a long video.

After recording, I let the robot run until it docked and here’s what it looks like… 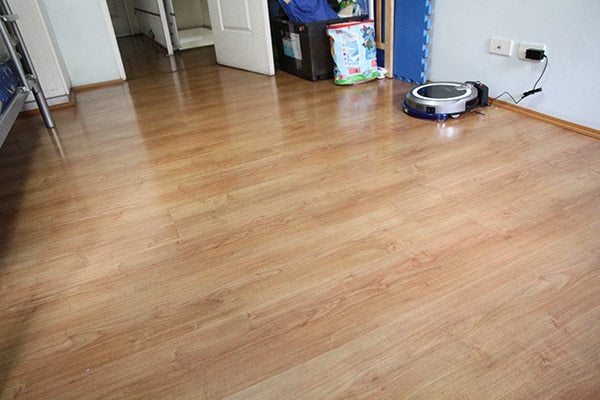 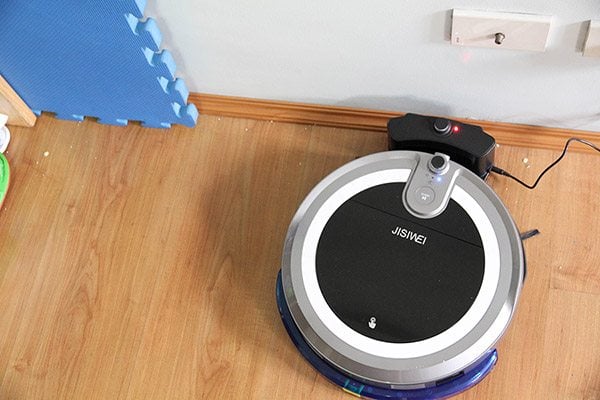 It also got messy, the microfiber mop that is. 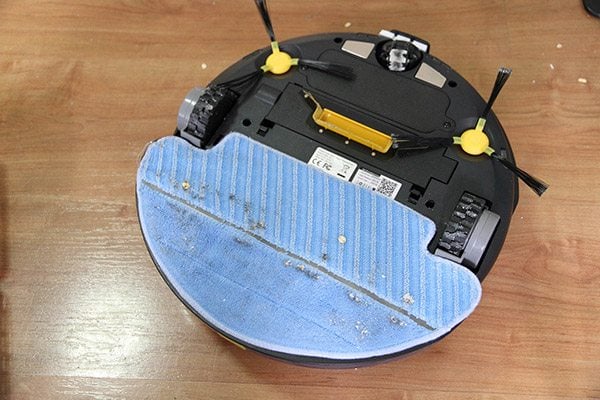 The front wheel also was a mess so I have to clean that.

You can buy this from Amazon for less than $160 but to truly get the best deal please check the links below for the latest price and coupon codes to get more savings.

There is a lot to like about the Jisiwei I3 robot vacuum – it cleans well, has a long run time (2 hours), comes with a mop and water tank that you can use simultaneously with the vacuum and has a large bin.

It would be a great addition to any home that has a variety of bare floor surfaces like tile or hardwood.

The app however is another story. Right now it is buggy and not stable. Connecting the app and robot isn’t a straightforward process as you may need to restart the app (or even your phone) several times to get the connection.

The camera while it has a good purpose seems more like a novelty right now because of its position. If the robot is docked you’ll only see a red light flashing. It’s practically useless.

Jisiwei has to install another camera on the back of the robot to make this feature usable.

Returning to the dock could be a potential issue. Several times it didn’t dock but that only happens on occasion. If you follow the suggestions in the manual docking should not be an issue.

But the buggy software and limited features from it (e.g. lack of scheduling) prevent me from recommending this product over a cheaper product like an ILIFE X5.