Prior to the Roomba 880 iRobot utilized counter rotating brushes that had a squeegee and bristled brush. This setup produced great results in terms of cleaning performance. It was so good that it has beaten the Neato BotVac 80 in cleaning tests.

But there was one caveat, it was a magnet to dust bunnies and pet hair and maintenance can be a tedious process. 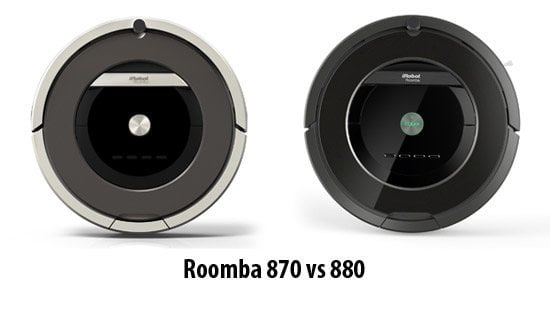 This was a concern by consumers that prompted iRobot to improved upon this existing design. When iRobot unveiled the new 880, they introduced a new concept they call “extractors”.

It retains the counter rotating concept of two bars working together to pick up dirt but instead of using bristles and squeegee they’ve used rubberized rollers with threads for agitation.

Today we’ll be looking two Roomba variants the first used this feature – the Roomba 880 and 870.

Currently Roomba 880 is cheaper in Amazon even if it has more accessories included. Remember that both of these robots have the same motor, navigation, dimension, bin, everything. The difference would be the accessories that come along with it.

We’ll look into this in detail and see which one is a better bargain.

The biggest change that iRobot made with the Roomba 800 series is the design of the counter rotating brushes.

It uses two counter rotating “extractors” that does not have any bristles instead it has a contoured surface for better agitation on carpet and bare floors. 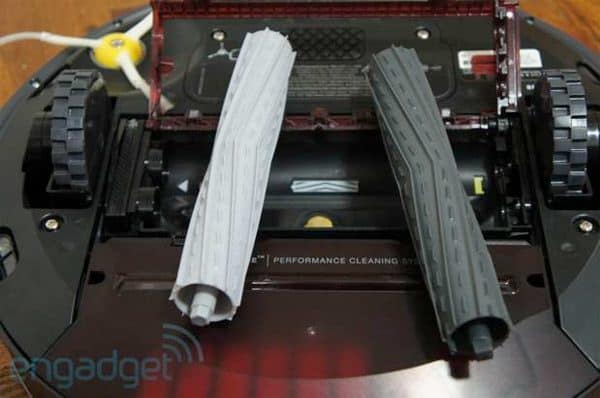 Based on reviews and tests this new technology looks promising and is a big reason why this machine was a bestselling product. Read the detailed review here.

Navigation wise it still retains the same software used by the previous 700 series robots resulting in a random pattern that may miss a spot here or there.

Another downside to the random cleaning pattern is it takes longer to finish but on the plus side the battery will run for about 3 to 4 hours so that negates the inefficiency a little bit.

They’ve finally upgraded the navigation system and instead of using a remote control, you can use your smartphone to control this robot thanks to the custom made app. Cool isn’t it?

What are the similarities?

Both of these variants have the same motor, extractors, HEPA filtration and navigation.

Let’s look at the key differences

Biggest difference would be accessories.

With the Roomba 880 you’ll get a virtual lighthouse instead of a virtual wall.

What does this mean? The virtual lighthouse gives the 880 the capability to clean multiple rooms without having to start and stop the robot manually.

A virtual lighthouse acts like a door wherein it “leaves the door close” so to speak for a specific time period. After the robot finishes, it fires a signal and the lighthouse opens its doors and allows the robot to move to another area.

Here’s how the virtual lighthouse works…

The 870 only comes with a virtual wall that acts like a wall where it blocks the path of the robot from going out of the room.

Also it does not come with a remote control that allows you to turn on the robot without having to walk all the way to the charging base.

See this in action

The navigation of the 870 in action…

How the 880 navigates in a small room…

Currently, Roomba no longer make the Roomba 880 and 870 and has replaced it with the Roomba 890. Both variants are the same but the difference would be the 890 has WiFi connectivity and the smartphone app.

This variant is available in Amazon for less than $450. And it comes with the 2-day free shipping if you join Prime.

Amazon also sells extended warranties of up to 3 years if you want that extra peace of mind.

Even if the Roomba 880 has more accessories included in the package it is actually cheaper. It would be hard to recommend the 870 over the 880 just because of this alone.

The former has a remote and multi-room cleaning capabilities absent in the 870 and you’ll save over $30. And it is eligible for a free 2-day shipping through Amazon Prime!

Strangely Amazon has increased the price of the 870. If you’d ask me a year ago, I’d recommend it because it was cheaper but since it’s more expensive, it would be a disservice if I did.

In terms of cleaning these two will pick up just about the same amount of dirt. But it will suffer from inefficiency issues that come along with using an IR based navigation.

To give you some perspective, the 880 and 870 actually use the same navigation as the older 650 that costs nearly 50% less. And the 650 will actually clean better because of the more aggressive navigation that unfortunately will scuff furniture.

If price is a really big concern then I suggest going for the Roomba 860. It has the same navigation as these two but it’s cheaper by almost $100. Read this comparison article where I compare the 860 and 880 in detail to give you an idea how these are different.

Folks looking for a more efficient Roomba may want to have a close look at the 980. It’s the latest Roomba in the market right now with a brand new navigation that uses an on board camera plus SLAM.