Roomba 650 and 880 represent two different eras in the iRobot history.

The 650 is the fourth generation Roomba and one of the last that used a bristle and squeegee brush combo that made it so popular.

It also utilizes the aggressive cleaning algorithm that really digs in edges resulting in more scuff marks on furniture.

Take note that even if the 700 series is still available in Amazon you won’t see it in the iRobot store because they’ve discontinued production.

The 880 represents a shift in product design that started with the motorized brush. Instead of using the traditional brush and squeegee combo, iRobot replaced it with extractors made from rubber.

It still retains the counter-rotating feature but now it utilized a ribbed design for agitation.

The main reason for this change would be to eliminate the need for constant maintenance that a bristled brush would need.

Today we’ll have a close look at these two Roomba variants and how they differ.

By the way, iRobot has WiFi variants of these two robots – the Roomba 690 and 890. Each of these will have the same features but with WiFi connectivity and both will be compatible with Alexa.

Let’s start by looking at the interface. 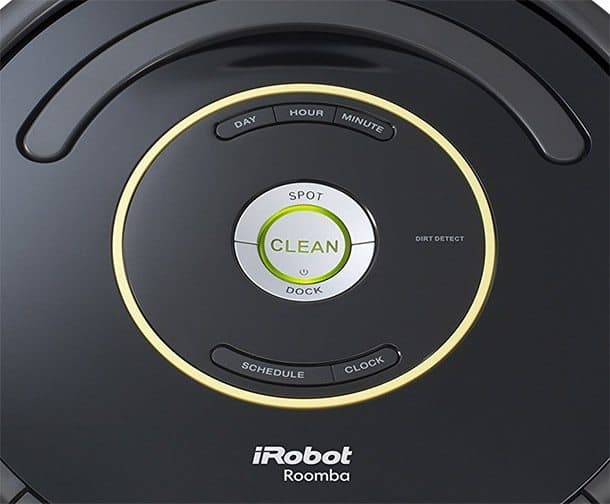 It actually needs all these buttons because it doesn’t have remove and has a scheduling feature where you can ask it to automatically clean once a day, seven days a week.

One feature I like with the 650 is the carrying handle that pops up. 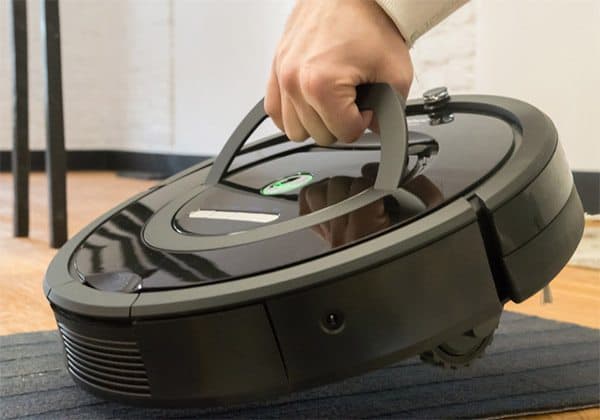 This allows you to carry this product with one hand. It’s a handy feature that allows you to move this around in different areas of your home.

The 880 does not have this feature but it isn’t a big deal because these products are autonomous so it will clean on its own regardless. 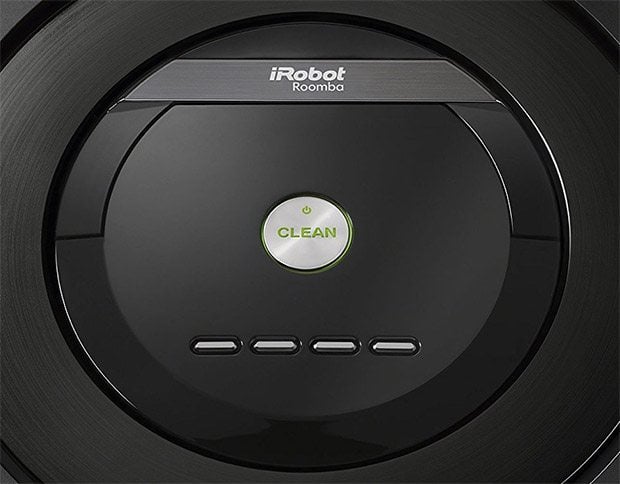 iRobot reduced the number of buttons in the 880 from 8 it was down to just 5. You can still schedule through the interface on the robot but it also has a remote that allows you to do it as well.

Aside from the color and interface differences both have the same size and use the same IR sensor in front. You’ll also notice a release lever at the back.

Pushing this lever reveals a dirt bin stored at the back. 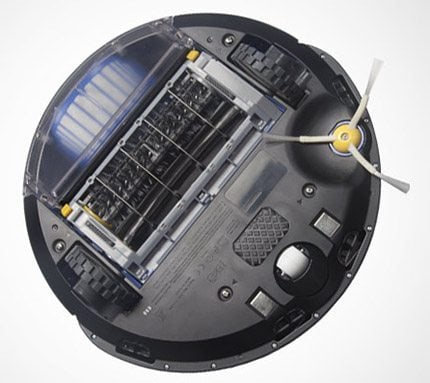 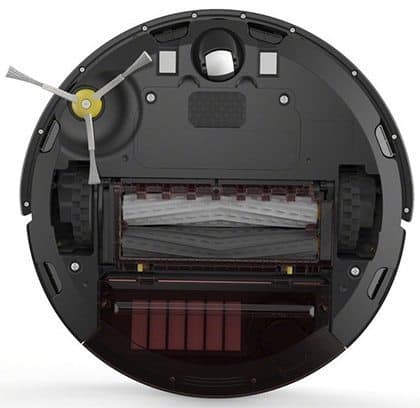 In terms of layout, there isn’t much of a difference except for the beater bar. The placement of the side brush, charging ports, wheels and bin are in the same area.

The 650 uses a squeegee and bristled combo while the 880 has two rubber extractors.

Prior to introducing the 900 series, all Roomba robotic cleaners used an IR-based system that bounced around like a pinball in a random direction after it bumps into an object.

This is especially true for the 650. It used an aggressive algorithm or the iAdapt 1.0 where it won’t slow down even with an obstacle in front of it. This aggressiveness will yield very good cleaning performance but at the expense of scuff marks on furniture.

iRobot has toned down this aggressiveness with the 880 where it actually slows down before bumping into an object.

The 880 will not scuff and damage furniture but it’ll pick up less dirt on the edges..

One big advantage it has over the 650 is its capability to clean multiple rooms thanks to the virtual lighthouse.

For those who aren’t familiar, a virtual lighthouse acts like a door where it opens and closes a “virtual door” depending on the status of the robot.

When the robot is just about finished cleaning an area or room it fires a signal to the virtual lighthouse to so that it can get out and clean another area.

Take note that the 880 is no longer available in iRobot’s online store but Amazon still sells it and you’ll get two lighthouses when you buy it there.

The 650 only comes with one virtual wall that blocks the path of the robot.

Aside from the toned-down aggressiveness, these two robots have the same random pattern. Compared to a Neato, it’s less efficient.

Historically Roomba has fared well compared to against other brands like the Neato, Infinuvo, and LG.

The 650 was a really good performer even on medium pile carpet where it is capable of cleaning up fine and larger particles of dirt thanks to its dual brush system. It does struggle cleaning pet hair because a lot of it sticks on the bristle.

This struggle is a big reason why iRobot came up with the rubberized extractors in the 880. The bristle-less design is supposed to be less work in terms of maintenance but if you have pets with long hair, stuff like this happens… 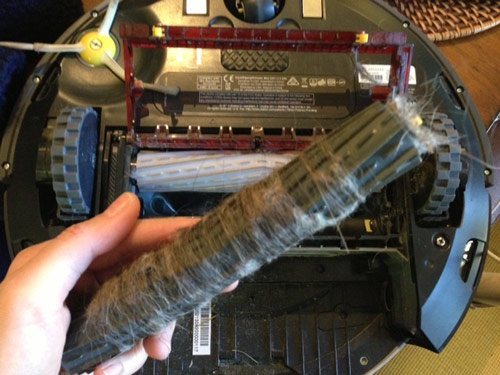 But consider this a rare occurrence. Unless you have a whole army of pets running around, don’t expect that type of mess on the beater bar.

Underneath both of these robots are acoustic sensors that detect dirt. If it sees more dirt, it cleans that area more thoroughly. This feature is a mixed bag to be honest, yes it is thorough but at the expense of efficiency and coverage.

Compared to a Neato that goes through its cleaning pattern regardless of the amount of dirt, the Roomba will miss more spots if the area has more obstacles.

People have commented in my other reviews about how they hated the Roomba because of this. So if you’re one of them then you’d have to avoid the Roomba and go with the Neato (or Xiaomi).

The Roomba 880 comes with a HEPA filter while the 650 only has the aerovac filters meaning it won’t filter out smaller particles of dirt.

This should only be a concern if you have any allergic condition triggered by allergens.

The 650 is the cheapest Roomba variant in the market right now selling for just under $370 in Amazon. An 880 is almost twice as expensive at over $610 in Amazon but you’ll get wo virtual lighthouses and 2 extra side brushes.

There you have it both of these variants represent two generations of Roomba that represented two different eras.

650 was one of the last Roomba products that utilized the iAdapt 1.0 navigation that was more aggressive. When I say aggressive, it means the robot will not slow down even with objects up front.

It also used an old brush roll system that included a squeegee and bristle brush which required more maintenance work.

iRobot began their shift with the 880. This is the first Roomba that used rubber extractors that required less maintenance and performed better in terms of pet hair cleaning. It also uses iAdapt 2.0 which is more forgiving on furniture because it slows down the robot before hitting one.

If you’re someone looking to buy a robot vacuum for the first time and don’t want to spend more than $500 then the 650 would be a good option to test the waters so to speak.

But if you have expensive furniture you may want to opt for the 880 because of the upgraded navigation that will not scuff furniture as much as the 650. It’s more expensive though at more than $600.

Other options to consider

A Roomba 650 is the cheapest Roomba available right now but at close to $400 it’s still expensive for a machine that doesn’t deep clean.

Fortunately, there are other brands that are far cheaper than a 650 (and 880) that performs almost as well.

If spending more than $350 is not an option here are several cheaper options to consider.

For folks who aren’t familiar ILIFE is a Chinese brand that makes robot vacuums. One of their goals is to challenge giants like iRobot and Neato by providing affordable options.

The A4S is one of their newest products that utilizes a similar navigation to a Roomba.

It uses a series of infrared sensors that goes in a random direction but it lacks the acoustic sensors that detect the amount of dirt.

This sensor forces the robot to focus its cleaning on dirtier areas. But with the random cleaning pattern, you don’t really need this feature because this alone will be thorough enough.

The A4S is available in GearBest for less than $170.

For homes with only bare floor surface the V5 Pro is a great option because it doesn’t have any motorized brush. Performance is still great thanks to the solid product design and decent suction.

Since it does not have any motorized brush, there is one less component to clean. And this will save you time in terms of maintenance. It also has a wet/dry mopping feature for surfaces to clean surfaces like tile.

The V5 Pro is available in GearBest for less than $160.

Ecovacs is another option for homes with only bare floor surfaces. In terms of design it’s similar to the V5 Pro with dual side brushes and a suction port that has not beater bar.

This is another Chinese made product that has similar features as the Jisiwei I3 but based on videos I’ve seen it seems to have more refined navigation.

In terms of performance, this will do pretty well on any sealed bare floor surface that doesn’t have cracks. As a bonus, you’ll get a mop and water tank that allows it to wet mop.

The DEEBOT is available in Amazon for less than $170.

For homes with carpet and bare floor the V7S Pro is a great option.

Since it has less power than the A4S, it’s less noisy. But don’t worry performance isn’t an issue because it has a larger brush roll.

It also comes with wet mop functionality and an upgraded water tank that has a release valve to regulate water flow.

But it still lags behind a Braava Jet in terms of mopping agitation but the Braava doesn’t have the same versatility because it’s purely a mop.

The V7S Pro is available in GearBest for less than $200.