The Roomba 690 is an excellent option for people looking for a robot vacuum with WiFi connectivity and Alexa compatibility.

These features allow you to ditch the remote and use your smartphone to control this remotely.

When the first iRobot came out more than two decades ago, it was a groundbreaking appliance that did the vacuuming for you.

How good is this entry-level Roomba? 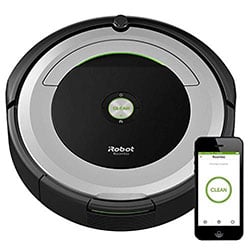 The Roomba 690 is iRobot’s least expensive option that uses the old-style bristle and blade brushes. It has the standard algorithm which means it’ll go in a random direction. It does not have the systematic navigation that the newer generation 980, I7 and S9 has so it’s not as efficient. The 690 is the same as the Roomba 650, but the former is compatible with Alexa and Google Play so you’ll have an option to use voice, it’s also got WiFi and a smartphone app so there are more options in terms of scheduling and you can access the robot through your smartphone. It’s the least powerful Roomba with just 7 CFM of airflow so it’ll struggle with picking up fine debris on bare floors and will require several passes to pick up.

After two decades though, consumers demand more, and with more people owning smartphones, manufacturers had to adapt and design their products with smartphones in mind.

The Roomba 690 (Roomba 694 in the Asian market) is the result of this adaptation by iRobot.

To give you a little history, before the 690 came out, Roomba had the 650. And when competitors started to come up with robot vacuums that had WiFi iRobot had to adapt thus the birth of this variant and the 890.

The 694 is the Chinese version of the 690, but both of these robots have the same motor, dual brush system and will perform the same.

What’s the difference then?

It’s all about geography. If you live in Asia as I do, you wouldn’t be able to buy the 690 on Amazon because they don’t ship internationally. So iRobot did the next best thing and partnered with GearBest to distribute the 694 in the Far East.

If you live in the United States, the best option would be purchasing it directly from Amazon for less than $300.

A quick look at the features of the Roomba 690

What to expect from the Roomba 690?

The Roomba I’m reviewing is the 694 which is the same robot as the Roomba 690.

Both these variants are virtually the same machine – only the branding is different.

Consumers living in the Far East would be better off buying the Roomba 694 because of the geographical location – you’ll save on shipping charges.

Before I continue, please watch this video where I unbox, explain the features and test this robot.

The packaging of iRobot is high-quality recyclable cardboard, and all the contents are in separate packages. 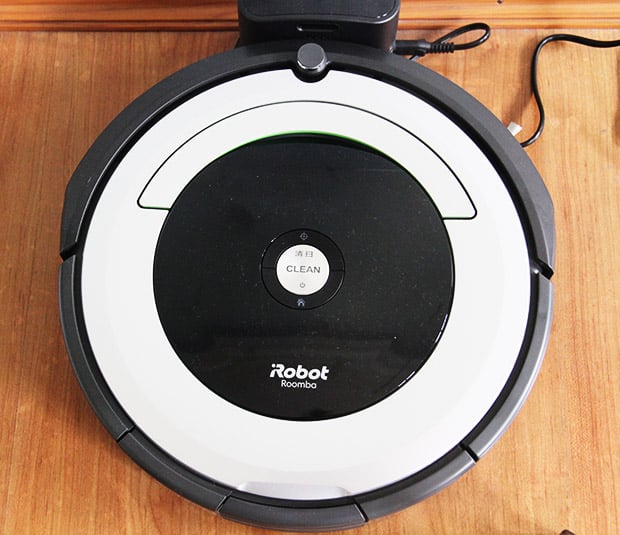 The Roomba 690 comes in a nice black and gray two-tone finish with three buttons on top.

These include the clean, spot and home button. On top of it are LED lights for the battery and WiFi.

It also has a carry-on handle on to that makes transporting this robot easier.

The robot isn’t, weighing less than 8 pounds so the handle should be able to carry the weight. 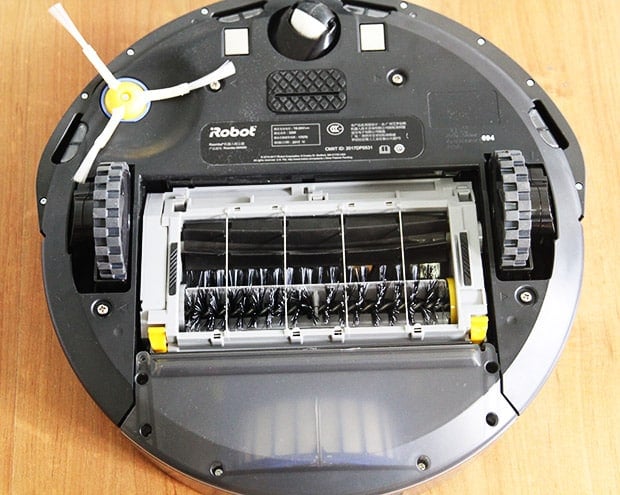 Flipping the robot over will reveal a two brush system that Roomba is known for making.

The Roomba 690 has the same layout as the Roomba 650. These include the bristle and squeegee brush that work great on bare floor and carpet.

It also comes with a single side brush that surprising works well in the cleaning test.

One feature I like about the Roomba 690 would be the smartphone app that comes along with it. This app is compatible with both Android and IOS so anyone with a smartphone can use this.

If you live in the United States, open the app store or Google Play to download. But if you live outside North America, you may not be able to download the app directly.

So what I did was open iRobot.cn then get the app from this page.

The app itself is simple yet very stable. It does not have as many features as the Xiaomi. But it has all the necessary ones like cleaning and scheduling. One important thing is having access to the robot remotely.

One feature I like would be the ability of the app to schedule to clean at different times on different days. There’s also an option to clean on specific days.
For example, you want it to clean only on Tuesdays and Fridays – that is possible with the iRobot Home App.
It gives you options to clean at the most convenient time for you.

Returning to base after pausing the robot

The iRobot Home app has a feature that gives you to continue cleaning or returning to home base after you pause the robot.

Unfortunately, the app does not have access to the spot cleaning mode.

Connecting the app and robot

One device you need to connect the robot and app would be a router. If you don’t have WiFi connectivity at home, this would not be possible.

Once you’ve installed the app, follow the steps laid out on the screen. Don’t forget to turn on the WiFi on the robot for the connection to take place.

To do this, press the home and spot buttons simultaneously.

You can find these buttons at the top and bottom part of the sizeable clean button.

Again, please watch the video above to see how it’s done.

This robot relies on three brushes to clean floors – one side brush and a counter-rotating brush system. 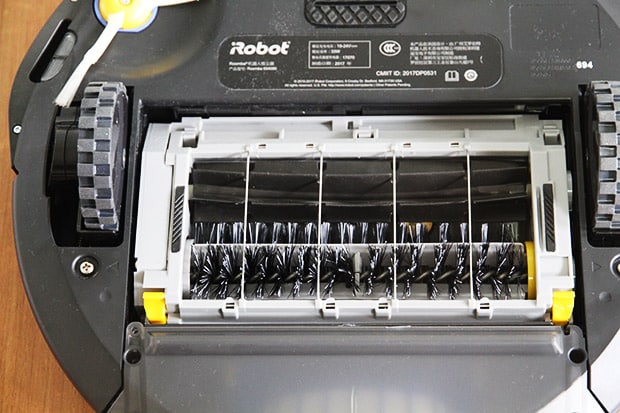 It is one of the few brands that use such a system and is the best at doing so. All Roomba robot vacuums before the 800 and 900 series use the same brushes.

Powering this robot vacuum is a 2,130 mAh lithium-ion battery that takes around 4 to 5 hours to recharge. But it only runs for about 60 minutes.

This helps clean edges better, but the downside is a lot of scuffing on furniture.

When the first 600 series robot came out, iRobot toned back this aggressiveness, and it did not bump as hard.

Despite this change, edge cleaning is still good. Please watch the cleaning test in the video above to see what I mean.

The Roomba 694 also comes with a spot cleaning option that cleans a small area inside the room. Unfortunately, this option is not available in the app. You’ll need to press the button on the robot to get access to this feature.

What you do is place the robot in the area you want it to clean and press the spot cleaning button.

The Roomba 690 is the least potent of all the Roomba options with just 7 CFM of airflow. Despite the lack of airflow, it was still able to perform decently well on carpet and bare floor as you’ll see below. The dual brush system that iRobot uses makes up for the lack of suction but there are some quirks you’ll need to be aware of.

When it comes to cleaning hard surfaces, the Roomba 690 is an excellent job. Take note that it just uses a standard algorithm that will bounce around in a random direction so efficiency isn’t a strong suit. 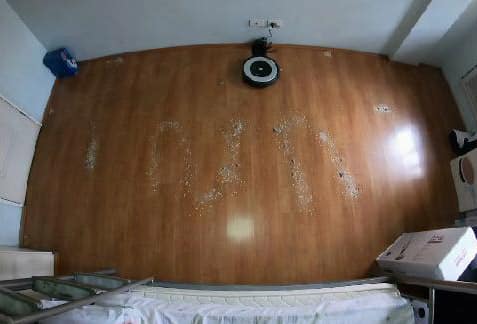 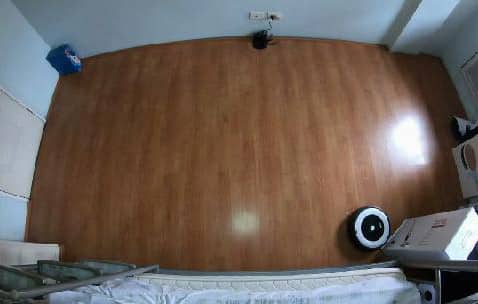 Out of the 40 grams of oats and powder, it was able to clean 39 grams. What was impressive was the cleaning capability of the counter-rotating brushes.

The floor didn’t feel dusty after the cleaning test. Even though it was not efficient because of the IR navigation, it was very thorough.

Another downside to the inefficiency is the inability of this robot to clean multiple rooms without getting lost and not getting back to the charging dock safely.

Despite having only a single side brush, edge cleaning is also was great. It was able to pick up dirt on different edges and corners I scattered dirt on.

One issue with the Roomba 690 is the strong exhaust that tends to blow lighter stuff like pet hair around. The side brushes also will scatter dirt around so it’s not very efficient.

When it comes to cleaning surface dirt, there will be no issues with the Roomba 690, as the dual brush system has enough agitation to do the job. It will pick up small to large particles of dirt without any issues.

The strong rotation of the side brush will be less of an issue on carpet as it is on hard floors but the exhaust will still blow fluffy stuff around.

It will do a below-average job of deep cleaning carpet. In the tests done, the 690 was able to pick up 62% of embedded sand on medium pile carpet which isn’t stellar and ranks at the lower end of all the robots in its price range.

Despite having less power than the more expensive Roomba robots, the 690 is still quite noisy. In noise tests using a sound meter, it produces up to 72 decibels. Considering the low airflow, the noise level is quite high. Compare this to the Roomba 980 that has 76 decibels, it doesn’t do a good job at muffling the noise.

If you live in Asia, the best place to buy this would be in GearBest where it’ll cost around $430.

However, if you live in North America, it would be better to purchase this in Amazon where it’ll cost less than $300 – cheaper than the Roomba 650.

One advantage of buying in Amazon will be the availability of the 2-day free shipping if you join Prime. Extended warranties are also available if you want that extra peace of mind.

The Roomba 690 is a great option if you don’t mind not having the premium features found in the Roomba 960 and 980.

If you’re thinking of buying an entry-level Roomba, the 690 is a no-brainer choice.

Though it is a notch below the Roomba 800 series, it still performs well considering its age.

Another reason to consider this Roomba to perhaps a cheaper brand like the EcoVacs or Eufy would be aftersales support.

iRobot being in the industry for over two decades does offer great after sales service. Many consider iRobot to have great longevity because of the abundance parts in the aftermarket such as batteries and brushes.

If any of these parts break, you won’t have trouble finding these parts.

Several reasons why you should consider buying the Roomba 690:

One of the Cheapest Roomba Options Available Right Now

The Roomba 690 is a good option for people looking for a mid-priced robot that will do the job. It isn’t stellar in any category but still decent. It does well at picking up surface dirt, but struggles a bit when it comes to deep cleaning carpet. This robot uses the standard navigation system that goes in a random direction, so don’t expect it to do well at cleaning large areas. It’s best used on a single room basis to take full advantage of its thoroughness. Overall, the performance is decent, but other options will do better that cost less such as the Roborock E25 and Shark ION R85.

2 thoughts on “Roomba 690 Review: A Roomba With WiFi Connectivity”