ILIFE V8S Review: The Next Generation ILIFE Robots Are Here

In this review, we’ll have a close look at the ILIFE V8S Pro – part of ILIFE’s next-generation robotic vacuums.

I’ve been testing this robot for the past few days, and it has some exciting features that make it a good alternative for people looking for a budget robot vacuum.

Like the ILIFE V5S Pro, it does not have any motorized brush, so it relies only on suction, so it will work best on hard floor surfaces and won’t be as effective on carpet. 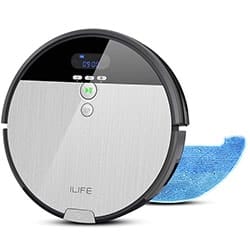 The V8S has one of the biggest dust cups at 750 milliliters which biggest than most other options in the market that includes the Roomba 690, , , and . Having a large bin is essential for robots that don’t have the smart mapping feature because you don’t have to empty it as much. When it comes to navigation, it’s an in-between: doesn’t precisely pinball around, but goes in a straight back and forth pattern and toggles between cleaning the middle and outer portion of the room.

Introduction to the ILIFE V8S

The ILIFE V8S is a sharp departure from its predecessor, the V7S Pro. In the place of a top-loaded bin is a tray-type bin similar to the A-series robots. This change in design allows a larger container to be put in.

Before I continue, please watch the video below to get a low down on what’s inside the box, features and cleaning performance test. 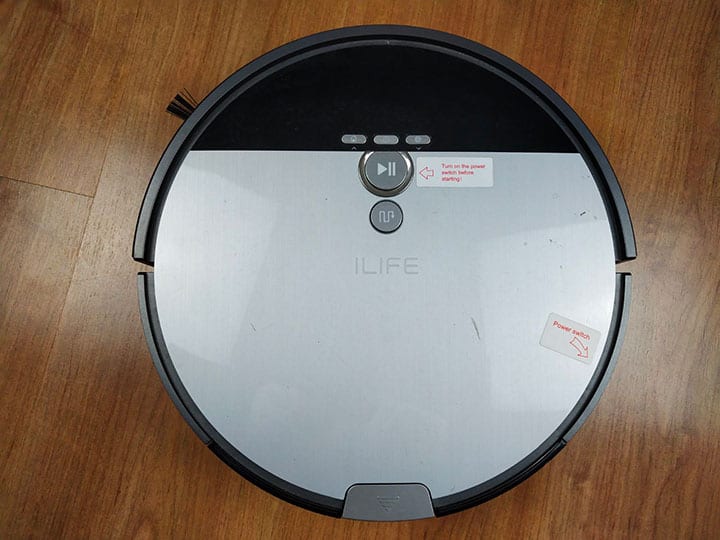 The interface is straightforward, with just five buttons and an LED screen on top of it.

I like the color combination of this robot. The black and gray accents echo a more futuristic feel for the robot. If you’re a sucker for sleek design, this is the robot for you.

On top, you’ll see five buttons and an LCD screen. These buttons give you access to the default cleaning cycle, path mode, and scheduling.

There are no doors on top because the tray slides in and out from the back. 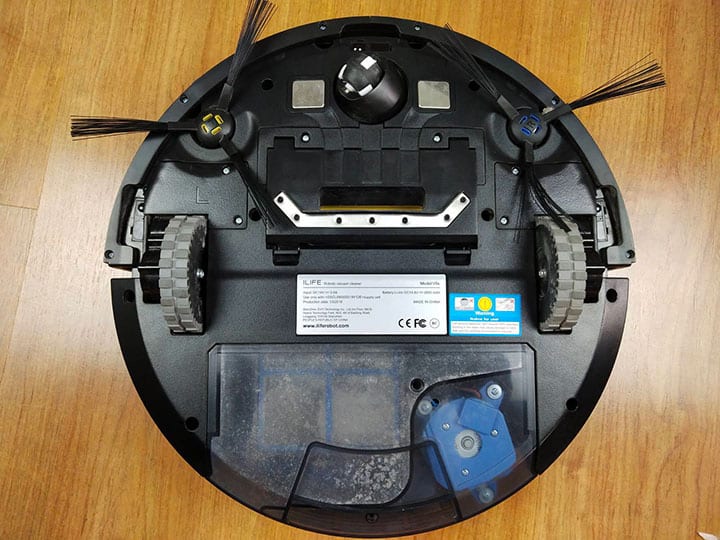 Take note that the brush will wear out over time so you’ll need to replace it when it does. ILIFE does include an extra pair of side brushes.

Yes, there isn’t any motorized brush with the V8S. If you want something with such, you can go either with the V7S Pro or the A6, A8, or A7 for that feature.

Underneath the suction chamber is rubber flaps that ensure that dirt doesn’t go past it.

One of the most significant improvements aside from the navigation would be the dirt bin. The one found in the V8S is huge. 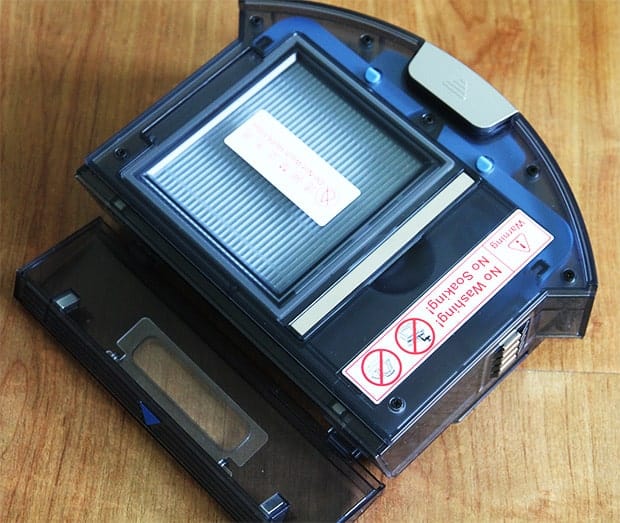 How much can it hold? It can store as much as 750ml of dry dirt. It’s one of the largest capacity bins there is in the market. Bigger than the Roborock, Roomba, Neato Botvac and even Dyson 360 Eye bin.

This means that you can clean more and spend less time emptying it.

One downside for the V8S is the lack of a containment system like a virtual wall. That means if you want to block this robot from entering an area that’s off-limits, you’ll need to block the path of the robot physically.

This robot also comes with a mop attachment that will allow you to wet mop tile. But don’t set your expectations too high because this robot isn’t a Braava that makes a scrubbing motion.

It has the same navigation pattern as in vacuum mode. The only difference is it mops 7m x 7m quadrants for efficiency.

Another difference you’ll see in the V8S is found in the remote. There’s no more screen on it, and you won’t be able to use it to schedule. All scheduling is done on the robot itself.

One of the most significant selling points for the V8S is the upgraded navigation that they say is more efficient.

The beauty of this robot is that you have two options.

If you want to clean your home thoroughly, just activate the default cleaning mode.

And this robot will go on start cleaning the edges then go in a random direction then back to edge cleaning and go on this cycle until the battery is low.

If you want something more efficient, then go with the path mode where the robot will toggle between a predictable back and forth cleaning pattern and edge cleaning until it finishes the whole area.

Please check the video below to see a demo on how the V8S navigates.

The remote will give you access to different modes.

I was a bit skeptical on how this robot will perform because the A8 didn’t perform very well. I was expecting this to have a similar cleaning pattern to the A8, but it has a better one.

In the first cleaning test, I laid out 40 grams of oats and powder to see how this robot will handle it. And the results were great. It was able to pick up 38 out of the forty grams of dirt or 95%.

Here are some before and after photos for your reference 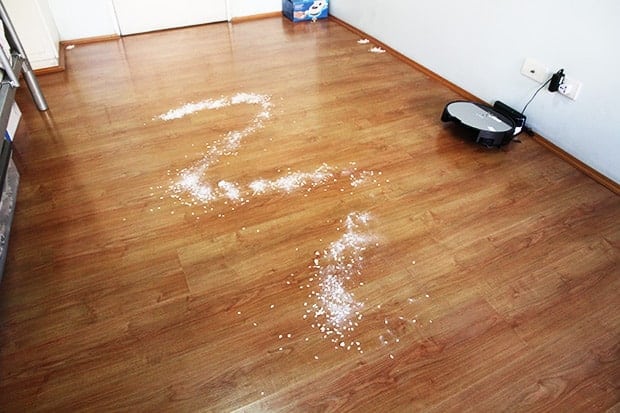 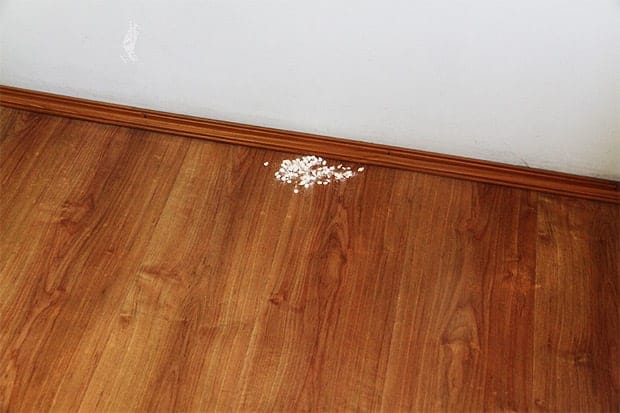 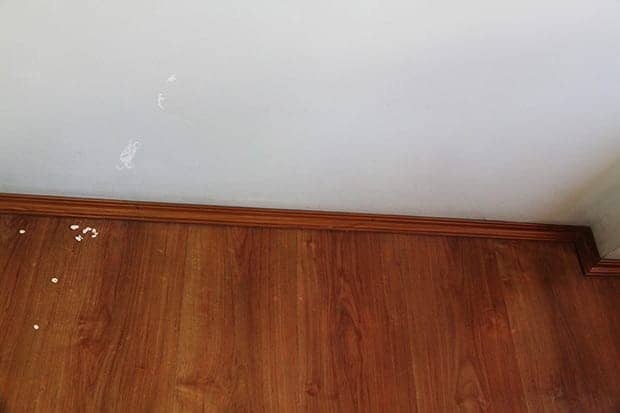 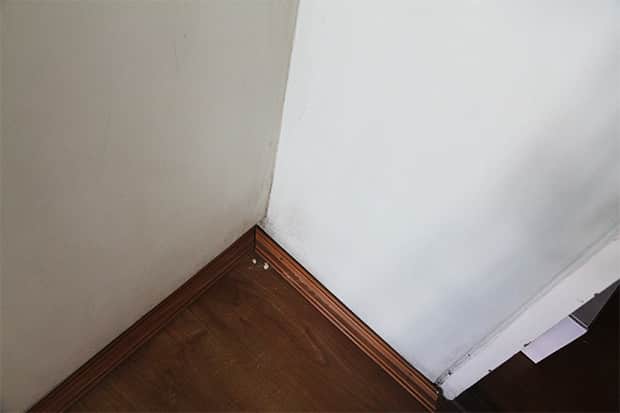 Edge cleaning is also another strong point, unlike in the A8 as this robot was able to go through the entire perimeter of the room.

Yes, there some bits of oats left but that’s because of the charging station that does not permit the robot to go near a certain two by two-foot radius. If ILIFE can upgrade this limitation, then this robot will perform even better.

To ensure the peak performance of the V8S, there are some maintenance steps that need to be done.

The most important part that needs to be checked regularly is the filter. Out of the box, you’ll get one or two extra filters, but since these aren’t washable, you’ll need to purchase extra filters. 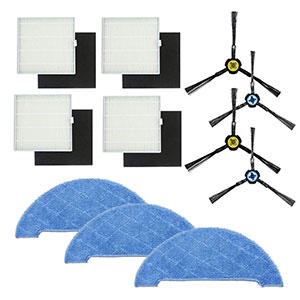 Fortunately, the parts for the V8S is readily available in Amazon. You can purchase extra side brushes, filters, and mopping pads at reasonable prices.

Other things that need upkeep include the drop sensors under the robot. Periodically wipe it using a dry cotton swab. Hair can also get tangled up on the side brush so please remove any that wraps around it.

The ILIFE V7S Pro does not provide the bells-and-whistles that other options may offer at its price range. Unlike the , it doesn’t have compatibility with Alexa and Google Assistant so it’s not possible to use voice.

It does have better navigation in my opinion that doesn’t just pinball around in a random direction but go in a straight back and forth pattern.

The dust cup is huge at 0.75 liters which is a big deal for robot vacuums with no restart and resume feature.

Although it can mop, it’s only effective at the lightest messes and not suitable for large messes. Don’t expect it to replicate what a dedicated mop does.

The warranty is standard – only one year. Replacement parts easy to find on sites such as Amazon so longevity shouldn’t be an issue.

Click here to learn more about the ILIFE V8S.

The verdict: Should you buy the ILIFE V8S?

The ILIFE V8S is a step up from the earlier generation V7S. It has better and more refined navigation but doesn’t have a smart navigation system than the more expensive robots have.

If you’re looking for something that will do the job and not mind the absence of any high-end features such as recharge-and-resume or persistent mapping.

It’s simple to use, easy to maintain, and the parts (aside from the battery) are readily available in Amazon.

An ILIFE With An Efficient Cleaning Pattern

The ILIFE V8S can be an excellent alternative for folks looking for a cheap robot vacuum capable of cleaning dirt on hard floor surfaces. It did quite well in the cleaning test, picking up 95% of the dirt. Even if it doesn’t have any motorized brush, it has good enough airflow and a good seal to pick up surface debris. Since it doesn’t have a brush, it will not pick up dirt that’s embedded under carpet strands. But not having a brush isn’t a bad thing because it’s one less part that needs cleaning. For homes that have a lot of hard floors, the V8S is an excellent option that you can look at.