Author: Garrick Dee Updated: April 4, 2019
I hope you like the recommended products. Just an F.Y.I., there are affiliate links in this post, and if you click any of those links, I’ll earn a commission. 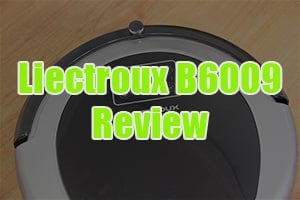 There has been an explosion of robot vacuums in the market right now. When you search the term in Amazon, you’ll not only see household names like iRobot or Neato but also a host other brands that many not be as popular but worth a look.

We’ll be taking a close look at one of those products in today’s review.

A few weeks ago I was contacted by lili-robot.cn about testing their product, the Leictraux B6009 robot vacuum and mop. And here we are.

At first glance this robot looks similar to the Jisiwei I3 and the Haier Xshuai T370. There are similarities but this robot is different in terms of navigation.

According to the manufacturer this robot has a CPU inside that’s maps that results in a predictable back and forth pattern ala the Xiaomi and Neato Botvac.

How does this compare? Is it better than those two brands?

What to expect from the Liectroux B6009?

And when you included the protruding IR sensor up front, it goes up to 4”. If you have furniture at the 4” threshold this robot will not fit under.

Out of the box you’ll get the robot, remote, virtual all, two extra side brushes, extra mop, mop bracket/mop and a manual. Unfortunately, the remote and virtual wall did not come with any batteries. A bit of a bummer but heck these are cheap. 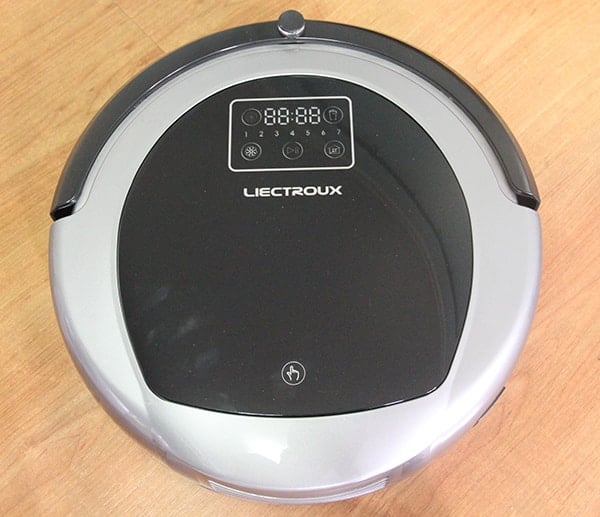 The robot has a two-toned gray/black finish with touchscreen controls on top. This interfaces allows you access to the default cleaning mode of the robot, battery status and possible error codes if the robot is stuck.

When I opened top door that leads to the bin, it dropped down and did no stay open. I’m not sure if this is by design or a design flaw but it’s something to take note of. 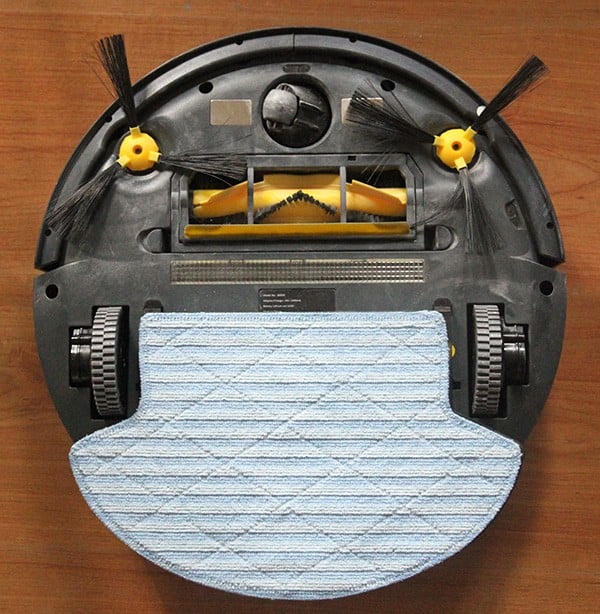 And a snapshot without the mop… 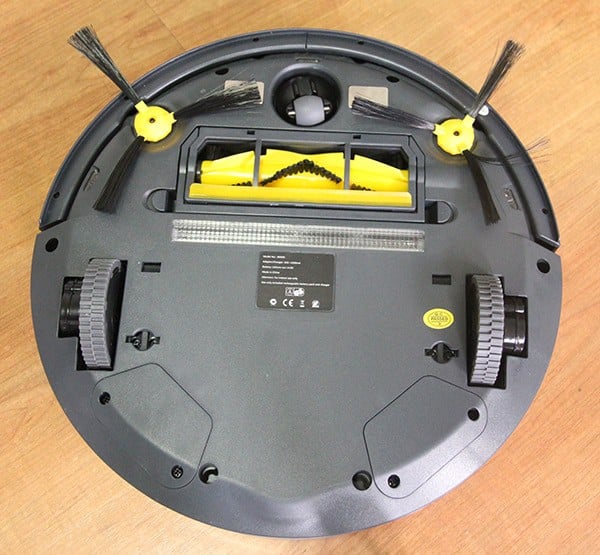 Flip the robot and it reveals a dual function machine that vacuums and mops. It has two side brushes and a combo brush.

The neat thing about the Liectroux is the bracket doubles as a water tank so you don’t need to switch anything if you want to mop.

It also has a mop function that turns off the motor and side brushes. 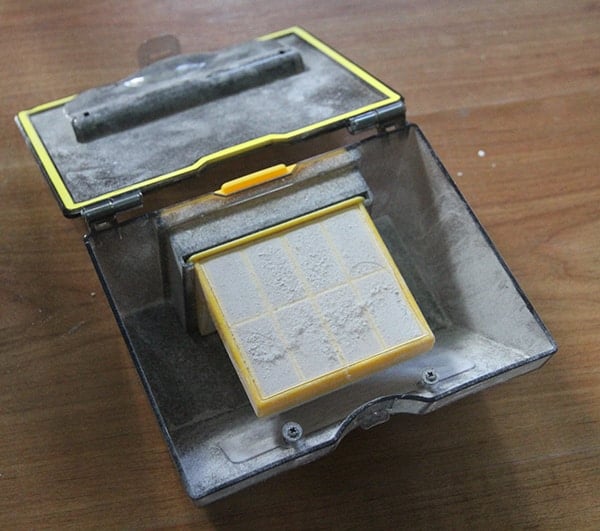 Dirt bin used by this robot is pretty generous – it can hold up to a liter of dry dirt. It has a two-stage filtration system, meaning it has a fine mesh filter followed by a HEPA filter that prevents microscopic dust from seeping through.

Granted this robot is a bagless vacuum so there is still exposure to allergens. 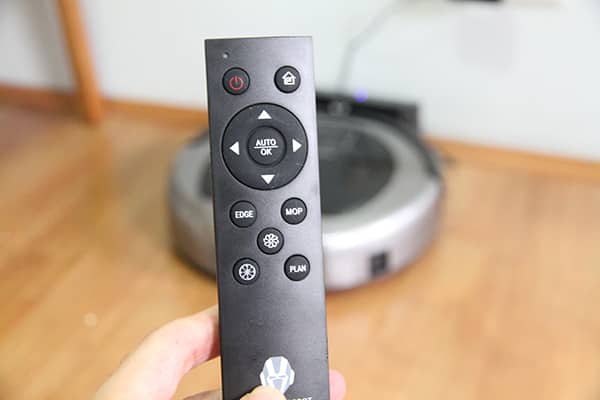 This robot also comes with a remote control that gives you access to the scheduling feature, different cleaning modes, power modes and the UV sterilization.

It does not have any screen so you’ll have to use this in conjunction with the robot’s interface to schedule.

By the way it does come with the 2 triple-A batteries it requires.

It also comes with a virtual wall that blocks the robot from going into areas that you don’t want it to clean.

According to Liectroux, this robot uses a CPU inside to help it navigate. It’s interesting how this robot navigates. Before my commentary please watch the video I recorded below…

It has a navigation similar to the Xiaomi but the difference is it starts the cleaning the middle part of the room first then moves outwards to clean the edges.

On paper this navigation seems to be more efficient because it’s predictable but their lies the problem.

Like the Xiaomi before the firmware upgrade, this robot is too efficient for it’s own good. And you’ll see why in the cleaning test later on.

This obviously an upgrade over the randomness of other brands like ILIFE and the older Roomba robots but at the expense of not being thorough enough.

It could be a reason why it did not perform so well in cleaning tests. 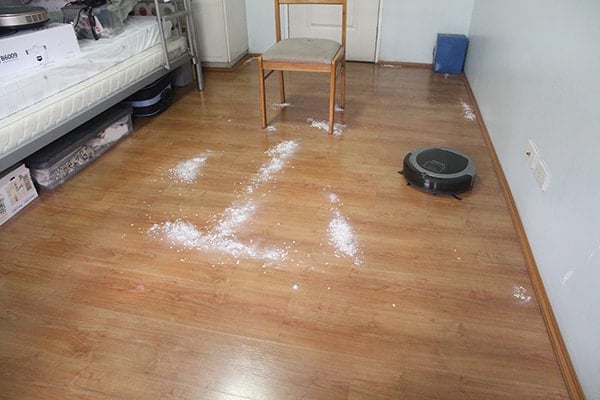 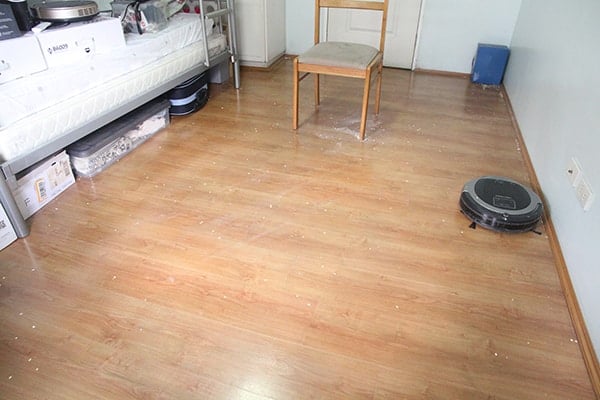 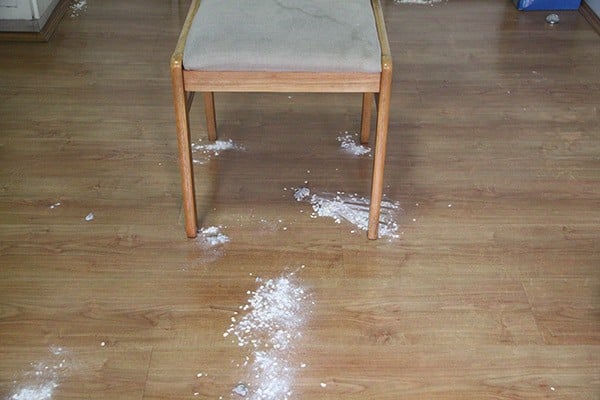 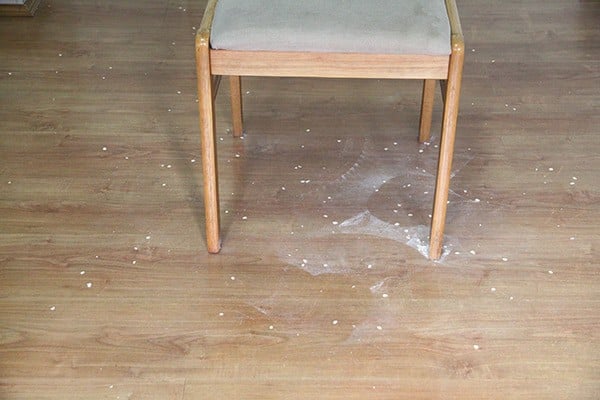 It is a torture test of some sort to see how the robot will reach and potential weak points.

I like to use powder because it’s white and you will clearly see if the brushes picked it up or not. While rolled oats simulates larger bits of dirt.

This test revealed some weak points with the B6009. First would be cleaning performance. The two side brushes kicked a lot of the rolled oats out of reach.

Suction seems weak because it only picked up half of the 50 grams of dirt scattered on the floor.

And while it did a solid job picking up dirt on the edges, it did struggle at the corner. It could be the short side brushes, navigation that doesn’t go close to the edge or both.

Whatever it is, I was expecting big things from this robot after watching a review so this is a bummer.

Lastly this robot stopped in the middle of a cleaning cycle 5 times. Yes that’s 5 times that it stopped.

I’m not sure why it stopped, it could be a dirty bumper but there was nothing blocking the motorized brush so it could be a software issue.

This robot also doubles as a mop. What I like is that the bracket has a built in water tank so you don’t have to swap anything just to mop.

Watch this video to see it mops…

While it did not have the back and forth mopping motion that you’ll see in the iRobot Braava, it did use a predictable patter that you wouldn’t normally find in a robot at this price range.

It’ll start at the middle part of the room going in a back and forth cleaning pattern and then go out to the edges and then return to home base. Unlike the ILIFE robot that has a random mopping pattern, this robot is more efficient.

What’s inside the box? 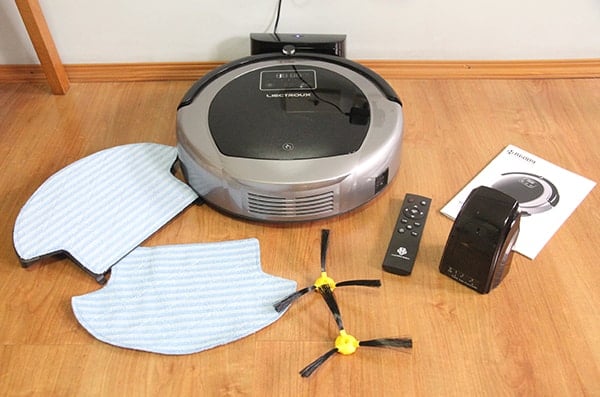 The Liectroux B6009 is only available in Amazon’s EU sites such as the United Kingdom, France, Italy, Spain and Germany.

You won’t be able to buy this in Amazon’s US website so only EU residents have access to this for now.

I had high hopes for this robot after watching a review video from YouTube but after testing, it did not do so well in the cleaning test, picking up only half of the 50 grams I scattered.

Manufacturer has to use a better performing cleaning brush and motor. Navigation is not bad because it has utilizes a more efficient back and forth pattern but it did not clean corners well and does not hug edges as other brands do.

There are also some annoying quirks like the robot not departing from the charging station after I pressed the clean button on the robot or remote. Another quirk I don’t like is the robot stopping on its tracks mid-cycle without anything blocking its path.

Overall this product looks promising but cleaning performance should improve and the manufacturer should figure out how to solve the nagging quirks I mentioned.