When Chinese robotic vacuums came popping out left and right, most of them utilized a random navigation that was very thorough. 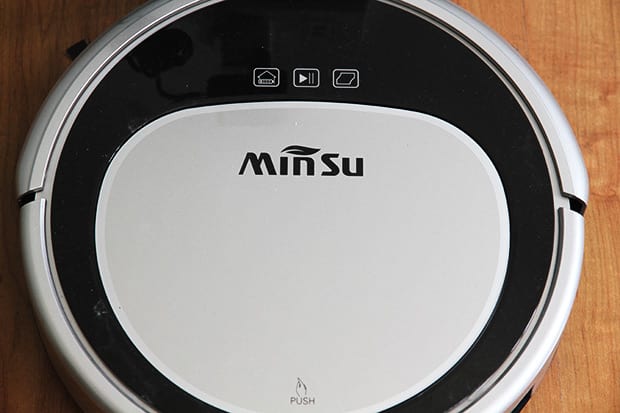 Some brands like ILIFE has more refinement than others.

But it seems like the tide is changing. ILIFE with the A8 began transitioning to a more efficient cleaning pattern. And the Minsu MSTC09 is following suite also with a predictable back and forth pattern.

We’ll find out in this review.

What to expect from the Minsu MSTC09?

When ILIFE introduced the A8 and the upcoming release of the V8S, there is a shift on how Chinese robotic vacuums are built. To be more specific I’m talking about navigation.

Previous generation Chinese robots all utilize IR sensors and random navigation pattern that wasn’t bad. But it was terrible in terms of efficiency.

Before I continue please watch this video to see what’s inside the box, features cleaning test where you’ll see how it clean and navigates.

These next generation robots seem to do away to the traditional random and now has a more efficient back and forth pattern. I saw this first hand with the ILIFE A8. And while the efficiency was impressive, the efficiency cost it some thoroughness.

It did not pick up as much as the previous A6 robot. The first generation Xiaomi robot vacuum also had this problem which was resolved with a simple firmware upgrade.

I’m still waiting on the A8 whether or not it’ll get a navigation upgrade. But let’s focus our attention on the Minsu.

Will it have the same issue as the A8 or will it be better?

The Missu MSTC09 has a brand new navigation system that does away with the old random cleaning pattern.

In its place is a more efficient back and forth cleaning pattern.

Minsu says that this robot has Intelligent Route Planning that uses a series of infrared sensors to track and avoid obstacles.

Under the hood, this robot has an ARM9 CPU that gives it some processing power to help navigate.

It also has a 2,000 mAh Li-Ion battery that will run for about 150 minutes before it needs recharging.

This robot will be able to clean around 200 square meters (or 656 sq. ft.) of floor space before battery runs low.

Measuring at just a little over three inches, this robot will fit under most furniture. And clean these hard to reach areas better than any upright or stick vacuum. The beauty is you don’t need to bend down to do so.

To keep allergens inside the bin, the MSTC09 also comes with HEPA filtration. One caveat though as the filter is rather thin and will need more frequent washes.

In terms of dry dirt capacity, this robot will be able to hold up to 400 ml of dry dirt which almost as much as a Dyson V6. 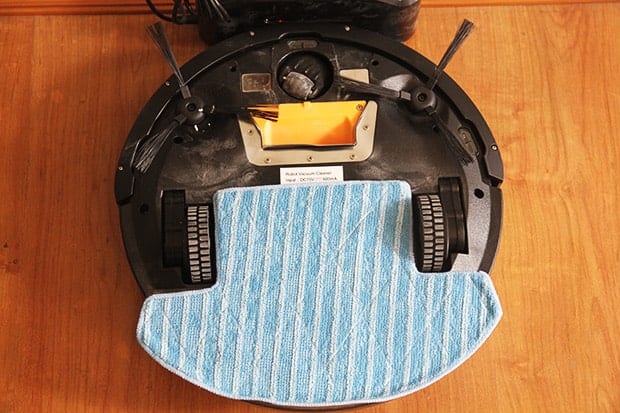 I already did mention that this robot has two functions – vacuuming and mopping. So I’ll focus on the latter in this section. This robot comes with a mop attachment that allows you to use it as a robot mop. 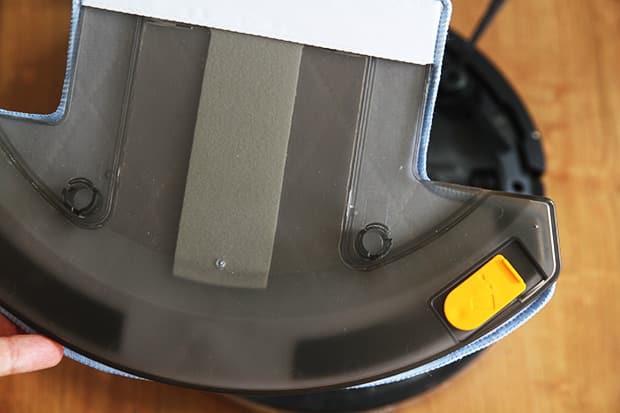 Mind you, it won’t have the same performance as a iRobot Braava but it’s a lot better than not having any mopping robot at all.

Minsu also gives you the option to just mop without having to turn on the motor. And this I think is a good option to have in cases where you just need to wet mop. But since the water tank is already integrated with the bracket, you can also use both functions simultaneously.

The best practice for me in using robot mops with a reusable pad would be soaking the pad in water or cleaning solution. So you don’t have to wait for the water from the tank to make the mop damp.

This also helps even out cleaning solution distribution if you choose to use any. And helps improves mopping performance.

It won’t have the same back and forth scrubbing pattern of a Braava. But expect it to have the same navigation as it would when it vacuums.

Out of the box you’ll get the following:

Since this robot does not have any motorized brush, I would not recommend using this on carpet because it’ll only pick up surface dirt.

If you need something autonomous for such, then have a look at the other brands such as ILIFE, Dibea and Xiaomi.

So the only cleaning test I did was on bare floor.

Please watch the whole video above to see the cleaning test which will show towards end.

For the cleaning test I used around 40 grams of oats and powder. The reason I like using this combo is because I like to see how a vacuum responds to both large and small debris.

And with powder and oats being lighter in color, you’ll clearly see what parts was able to clean and not clean. 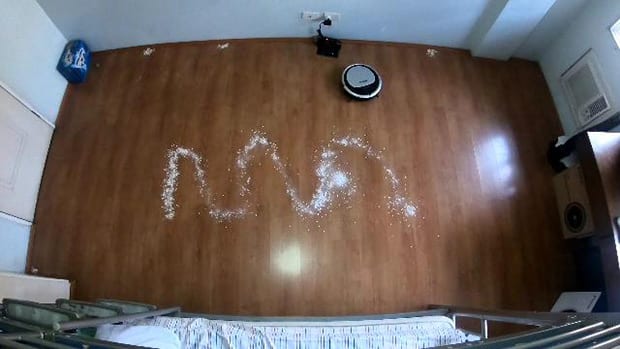 You’ll clearly see in the video and photos that this robot isn’t thorough. This was my biggest fear. Even though it had a predictable back and forth pattern, it clearly missed some spots.

Also edge cleaning was suspect. There was a moment where I thought the MSTC09 would go around the entire perimeter but it did not. It went halfway then went back to its normal cleaning mode.

Overall it was able to clean 30 out of the 40 grams. Not bad but not as good as the ILIFE and Xiaomi.

You can buy this in GearBest for less than $180 and get free shipping if you live in the United States. This robot is also available in Amazon but it’ll cost a little more – around $210.

Use the coupon code below to get more savings:

The Minsu MSTC09 is a huge step in the right direction for Chinese-made robot vacuums in terms of navigation.

But what it lacks is thoroughness. If Minsu can figure out how to adapt the navigation of the Xiaomi or Neato BotVac in their robot and still maintain the current price as is then we have a potential winner.

Until then this product looks promising but don’t expect thoroughness.

You will need to run this robot a few times to get it to clean a lot of dirt.

That’s the only downside I see with this robot. And it’s got a mopping feature to boot so you’ll get so machines in one.